We have drivers at pretty much every skill level. We have a guy that literally races with the pros and a few that are just as talented, and then there are people like me, the person that ask for extra time to be added to the end of the race so I can finish my last lap. I'm sure all the money that I threw at a new wheel is going to make up for my lack of skill. Right?....right?

What conference call did we get a shout out on?

There's a new bit highlighting a different GWJ sub-community of folk who play together at the end of the pod, and we were the first!

Remember that time Amanda popped into the Discord mid-race? That was research.

Oh I do remember that. Awesome. Wish I was up-to-date on the conference call so I could have thanked them in a timely manner.

Thanks all. PM sent.

Another question. I'm still installing the game, going to take a few hours, but do you buy the additional content thru steam, or is it something you do in game.

I see a few add-ons available in steam itself.

For RRRE, I would recommend buying content directly through their store page using their (slightly odd) currency points. You get a better deal on stuff that way.

Yeah, if you buy VRP directly from them, then you use the VRP to buy tracks and stuff, you'll save a bit of money.

One thing about RaceRoom is it installs all the content at start, including the stuff you don't own. So as soon as you buy something it just unlocks and you're away.

If you make it onto the Slack then you can get lots of advice about which packs to buy, saving money by using the virtual currency and when the sales usually land to get a lot of stuff for as little as possible.

If you want to start poking at the game with a view to joining us, I suggest you start test-driving some WTCR '18 or '19 cars to get a feel for which one you're happiest in.

If you go into the store in-game, there's a purple TEST DRIVE button when you're looking at a car which will let you take it out on a short but fun fictional track.

If you settle on a car, buy that car (we have a spotter's guide here so you can find a livery that isn't already in use, but word of warning, it isn't yet up to date, but will be within a few days), buy the Salzburgring track (i.e. where we're racing in a couple weeks), and start getting comfortable. If you want to depress yourself / feel good about how awesome you are, you can see some of the other driver's times on that track in "Leaderboard Challenge" mode (essentially a hotlap mode) here.

If you're not already on the GamersWithJobs Discord, join up there too, we use an on-demand voice channel for race night comms.

If you want to depress yourself / feel good about how awesome you are, you can see some of the other driver's times on that track in "Leaderboard Challenge" mode (essentially a hotlap mode) here.

Speaking of which, that's off to a good start.

Hey, I am interested in joining, although I'm not sure I'll be able to be present for every event given work and family obligations.

I have already gotten depressed about my laptimes, since on my first try I barely managed a 1.27.9 but I've never even seen this track before so I'll try to get some practice if I can.

A few noob questions if you don't mind:

1. Are there any rules or other things I should read in advance? I'm especially trying to replicate the conditions I'd be racing on eventually.
2. Do you notice any significant differences between the various WTCR cars? I'm practicing on the Civic.
3. I'm on a Logitech G920 and the force feedback makes the wheel "shake" a bit in the straights. Any suggestions on the best way to get rid of it? I'm trying to use the smoothing and it seems to have made it better, but I don't want to change the settings in a way that will hurt my experience with the FFB when it's actually useful.
4. Is it me or the AI misses the first chicane all the time, even when it's driving by itself in practice? It drives me nuts because I keep running into them.

Hello! And don't worry about making every event, just come when you can.

As for rules, the keys ones are that we use the "Get Real" physics settings, we use "Factory" settings for electrical assists (like ABS/TC), which means if it's available on the car in real life, you can use it in the game and then we don't touch the setups outside of fuel load.

Inside the race, inside the cockpit, you can move the brak bias back and forward as that's something you can do in real life, but all the stuff with springs, shocks, camber, caster, toe etc we leave alone.

As for differences in the WTCR cars - the big one is that some are sedans and some are hatchbacks, which gives some different handling behaviours. Within the body types there are subtle differences between default gear ratios, but really they're as close to identical as you'll get outside of a completely spec series.

I can't speak to the G920 issue as I have a Fanatec, but I used to have a similar issue in the first Project Cars. I lowered the FFB from 100 to about 95 in the wheel settings and damped it in the game settings and it calmed down, but never went away.

The AI in Raceroom is pretty handy, but all AI have one corner on every track where you'll see weakness. That chicane is an interesting one, because there's a lot of time to be made there, but the margin between getting it right and wrong is very small.

I'm going to be carrying 64kg of ballast in the race itself, so I'm going to whale through that chicane sideways.

I get a bit of that shake on the straights too. I mostly live with it. You might try cranking down the Steering Force Intensity to about 80%, not sure if that'll help, but it might. And keep the Force Feedback Minimum Force at zero, so it's not going to amplify the little forces on a straight.

Found this on Sector 3's forums with a reasonably detailed explanation of what all the FFB settings do.

Thanks for the replies!

I found a FFB profile for RaceRoom in RaceDepartment that solved the issue. I still get a little bit of shake occasionally, but it's mostly gone.

My G29 wheel shackes on straights if I let go, but any actual hand pressure it smooths out. During the races we do have a manditory pit stop, where you have to take two tires or it doesn't count. So I would practice that too, as far as lap times, I wouldn't worry too much about those.

You may be aware of this but actual WTCR drivers are competing on RaceRoom as well. They raced in Ningbo yesterday.

Things went to interesting places in tonight's race one. 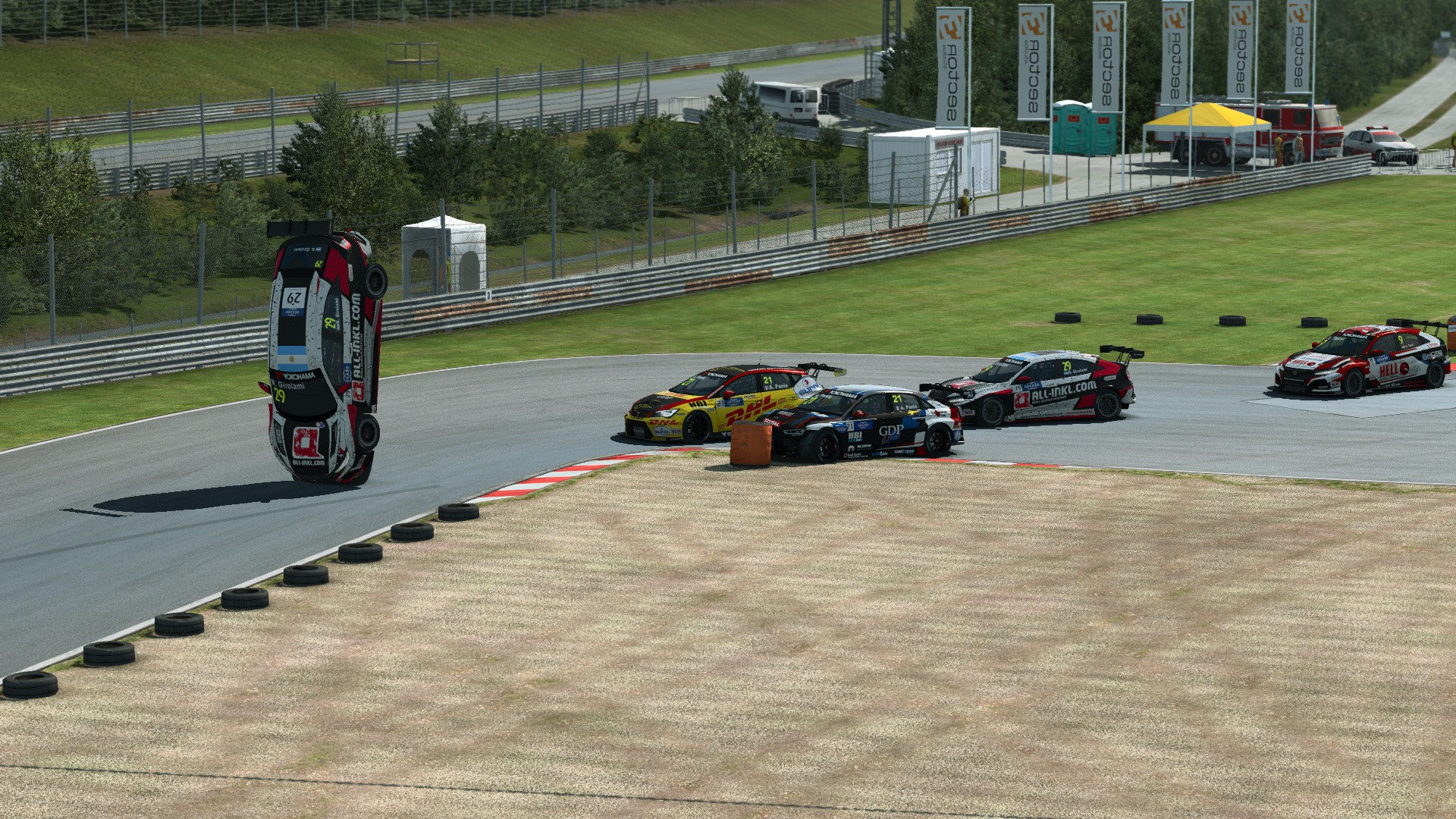 Was an awesome time! Had a lot of fun!

Last night was great, I had a lot of fun on my first race. Thanks for all the tips to get set up and I'm looking forward to the next one!

Well, we *tried* having a race over the weekend with a live commentator on the GWJ Twitch channel (shout out to StayGold for a great job!). However, Raceroom decided that after years of near flawless Dorks races that this time would be the time to totally crap out.

The good news is that we're already rescheduled for the 28th to re-run Knutstorp. AKA "The Nightmare Track"

I know, right? This track is hilly as all get out and we can... sorta do a jump and immediately hit a barrier. If it weren't for the servers going down that would have been the biggest let down of the night.

Great session on Knutstorp last night! We were flipping out!

Here is the stream with guest commentary by Staygold.

If anyone's interested, I'm going to try and live-commentate tonight's race at 9pm EST on Twitch.

Apologies if you go there at the time, and there's nothing - I'm still learning how to get all the ducks lined up.

My Commentator stream is up on Twitch, at least for a couple weeks. Only one minor technical snafu, when I tried to switch to the Discord chat to interview the drivers, their audio doesn't come through.

I'll certainly put the "dork" in Racing Dork. I may not have played any racing games since Pole Position (unless MarioKart counts), but they look pretty awesome.

Our final race of the season is November 22, and then we'll go into Silly Season, where we test lots of cars to see what we want to run in Season 7.

So if you're looking to get onboard with the Dorks, now is definitely a good time!

The Racing Dorks are trying to bring our Dirt Rally 2.0 club back to life. Ping us if you're interested.

This is asynchronous multiplayer, meaning there is a deadline to set a time on certain courses and submit it to the competition. We are trying to make this beginner friendly so everyone is welcome. It's totally fine if you play on a controller. Plus, it looks like clubs are multiplatform so I think console players can join too.

And if you're on PC, the game is only $5 in the current Steam summer sale.