I used someone's driver side door as a brake pedal after someone used my rear bumper as one.

I'll tell you how I make it.

Screw up quali so you start at the back of the grid.
Get a slow start off the line.
Brake reeeaaaal early and gently, so as to allow the ravening driver behind you, who has a taste for your rear bumper, enough time to swerve wildly past you.
Drive past the flaming piles of debris on Turn 1 ever so slowly, then start racing.

I'm only half-joking. After enough Turn 1 f*ckups in previous seasons, I decided that I'd be having a lot more fun if I wasn't in last place 15 seconds into every race.

The thing I especially like about that side to side video is watching the laps where the pitstops happen.

It was real close in both races.

In race one Lactose pipped Jonman by 0.007 seconds on the line. 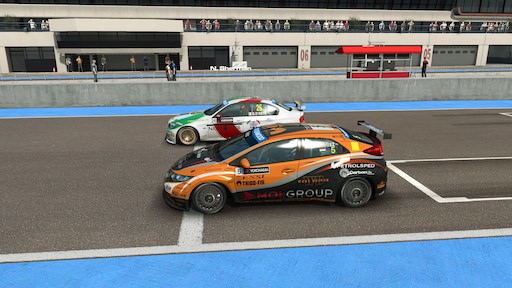 In race two five different drivers led a lap and then third and fourth were nose-to-tail coming out of the final corner and our shiny new BMW driver managed to pinch third place from FastMav at the line, also by a few thousandths of a second. 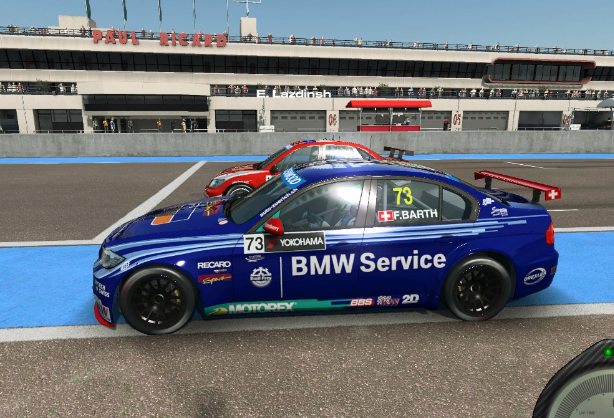 We use a reverse grid in race two, where the fastest cars from race one start at the back and I looked at the eight-wide cluster into turn one and decided to make my mandatory pitstop almost as soon as the pitlane opened, then try to make the tyres last a long second stint and they juuuuuust made it.

The front right was a flashing orange warning light with four laps to go and I lost control and slewed sideways through the final corners on the final lap, making a large smoke cloud, but just hung on for a win. 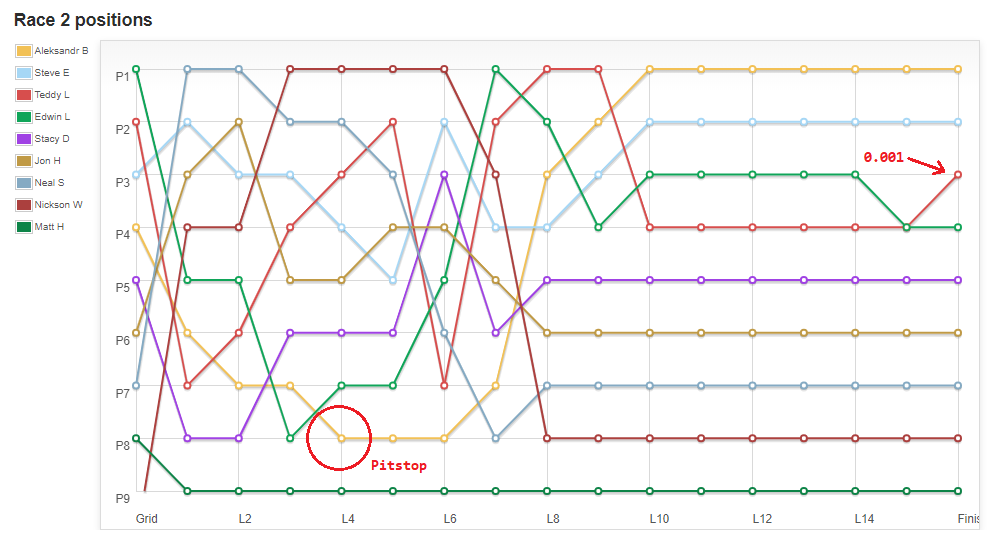 Next up is the Zolder Course in Belgium.

This grid isn't correct. It has me starting in 9th, but I started 1st in race 2.

It uses the race one qualification positions for the race two start positions because it doesn't understand reverse grids.

More Flying Circus shenanigans in the five minute session between qualifying and the race.

The racing itself was really good, with battles along the length of the field. Mav and I scored the exact same number of points across the two races, so the gap between first and second is still 15 points with four races left in the season.

Lupus tripled his lead over Travokk in third place - from one point to three - and the midfield tightened up with Jonman, Domano and Lactose all covered by two points.

In race one the front three finished six-tenths apart and then in race two EverythingsTentative led seven of the twelve laps, before sealing his second podium finish of the season.

Races 15 and 16 are at Zandvoort in the Netherlands and then the season finale is two races at Brands Hatch on the feisty "Indy" circuit.

The pirouette needs to be uploaded in slow motion.

Next race is Sunday at 9pm EST. We will be at Zandvoort Club. It should be a fun race. The track is great.

From what I remember we ran this track in testing, it was also what really sold us on the current cars, I expect alot of super close racing next weekend.

The promised super close racing showed up as the front seven cars in qualifying were covered by 0.4 of a second. Zandvoort Club is a short circuit - in race trim laptimes were around 1:05 - but it flows nicely and feels fast.

Fastmav won the first race from Travokk and then the second race went to Lupusumbrus, again with Travokk in second place. Because Lupus only finished sixth in race one the gap between Travokk and Lupus in the overall championship is now only one point, with one two-race event to go.

Five other drivers are at 51 points down to 18 points.

One event to go this season - the pair of standard and reverse-grid races at the Brands Hatch "Indy" circuit.

Racing Dork Season 4 is over.

Had a pretty disastrous run of luck, but still loads of fun to be racing close with everyone. Having such a small track meant we had lapped traffic to deal with, which was also interesting.

Looking forward to next season.

Shout out to anyone interested in joining the league. Now's a perfect time to join up. We're happy for any to join regardless of skill level or time commitment.

What do I need to participate?

We'll be running next session in Race room Racing Experience, which is free to play on PC. You'll need to drop a modest amount of money on content in-game: your chosen car and a selection of tracks for the season - we're in the process of picking cars and tracks via voting right now. You're probably looking at $20- ish bucks on content.

The game has a few cars and tracks for free if you want to download it and have a play around right now.

Hardware wise, I think all of us currently race with force feedback wheel and pedals. I believe some folks have used controllers in past seasons? Wheel isn't mandatory, but it's certainly preferred. You can probably find a used wheel and pedals on Craigslist for around $100. Entry level new ones run something like $200 in a sale, and you can get fancier all the up to four figures.

Skill is most definitely not mandatory. Theres a fairly wide range of skill levels on the track.

We organise through Slack. I can't remember how you join/get invited to the channel, someone else will have to chime in.

Next season probably won't start in earnest until the new year, though we'll be having some test dates between now and then while we winnow down the field of possible cars to drive, notably over Thanksgiving when RRRE usually has a free weekend where your can drive all the cars without owning them.

RRRE has an a la carte style pricing, but there are ways to save money by buying packs and you only have to buy one car from a class to race against all the others, so whichever car ends up winning the vote for season five you won't need to buy every one to join in.

Also on the plus side, you can go to the RRRE store and click the purple "test drive" button on any car and get a test session in that car at the (really very good) free Raceroom Circuit so you can find out if you actually like a car before plunking down any cash.

Controllers are viable if you're having fun using one - we mostly use wheels and pedals, but if you can keep it on the island using a controller you'll be fine to race and score points. Last season's cars prompted a lot of door-to-door racing which is easier with the fine control of a wheel but there'll be less of that if we end up in GT3 or open wheel next season.

Cool I'll check out RRRE and see if it will run on my rig. I have a wheel (Logitech Driving Force GT, it's old but it works) and I think I'm in slack already just not in the channel, I guess?

Driving Force GT will definitely do the trick. As a fellow Canadian keep an eye out for sales on the logitech/thrustamster wheels this week (If you are looking to upgrade). They typically have the g29 series down in the low to mid 200s

Hope to see you on the track

For those interested, everything in the game is on sale until Monday.

I'll probably bite, if this is the program for the next season. Until GTR 3 or whatever.

I guess we'll know by Monday which car(s) we need to get? Maybe there will a post with the recommended car/tracks package that would cover what I need... meanwhile I'm just having fun in the practice mode. It runs great on my older machine, and I can stream also! I am loving the car sounds. I know they made a big deal about it on the write ups, and they're not kidding. I love it.

Thanks lactose, good to hear from fellow Canucks. I believe you are right, G29 looks like it will be $250 for Black Friday at Best Buy.ca. Not this year for me, alas.

If you buy the American and Euro track packs you will probably have every track that could be in next season.

We haven't decided on which car for next season, but we have narrowed it down to: DTM 15, DTM 92, F4, GTR3, Touring Classics, WTCC 16, WTCR 18, X-BOW. There is no pack that will get all those cars, but you can buy your favorite from each class for around $18.

I guess we'll know by Monday which car(s) we need to get?

Probably going to be a little longer before we get a final class picked - there's not the free weekend happening over Thanksgiving that has been usual in years past....

Maybe we could get it narrowed down to 3 or 4. I'm sure everyone will be okay with you voting if you have any preference from the above list.

Oh, ok, no problem. I can still take advantage of the sale by getting tracks and whatnot.

Can someone invite me to the slack channel or give me instructions? I'm in the GWJ slack but I don't see a racing dorks channel in the list.

Hit one of us up with an email address (via PM if you'd rather not post that publicly), and we can invite you.

Hit one of us up with an email address (via PM if you'd rather not post that publicly), and we can invite you.

Joined the Slack channel, I'm in