The modder that created the ARMA2 mod Battle Royal has gone on to make his own standalone game based on the same concept.

It's built using the Unreal engine and is extremely addictive. It's all the fun stuff from the mod or DayZ or H1Z1 without all the crafting and base building bits.

For those that haven't played a battleground game the premise is as follows:

You're put on a plane flying over a 8X8km tract of land with diverse landmarks and cities. You only have the clothes on your back. Once you parachute in you have to scramble to find weapons, armor, vehicles and fight off the other 95 players to make it to the end. All while this is happening there is a collapsing energy fence that you have to stay on the inside otherwise you start taking continual damage which forces people inward and toward an inevitable conclusion.

It's very random and very intense as well as being extremely addictive. If you die you queue back up and at it again for another try within seconds.

You can queue up as a team of 2 or as a lone gunman. The duo mode allows for a knockout mechanic and you're able to revive your teammate if they're not taken all the way out. They're talking about a mode that allows teams of 5.

The pre-Orders have already sold out, but the game goes early access next week on Steam. I'm definitely going to jump in on this one. Gunplay is solid. The mechanics are solid and it's very quick shots of adrenaline.

I was lucky enough to get a beta invite from Jakeleg and for the most part we kept getting in the #20 mark, but did manage to make it to the end (well Jakeleg did. I had an altercation with a car near the end) once. 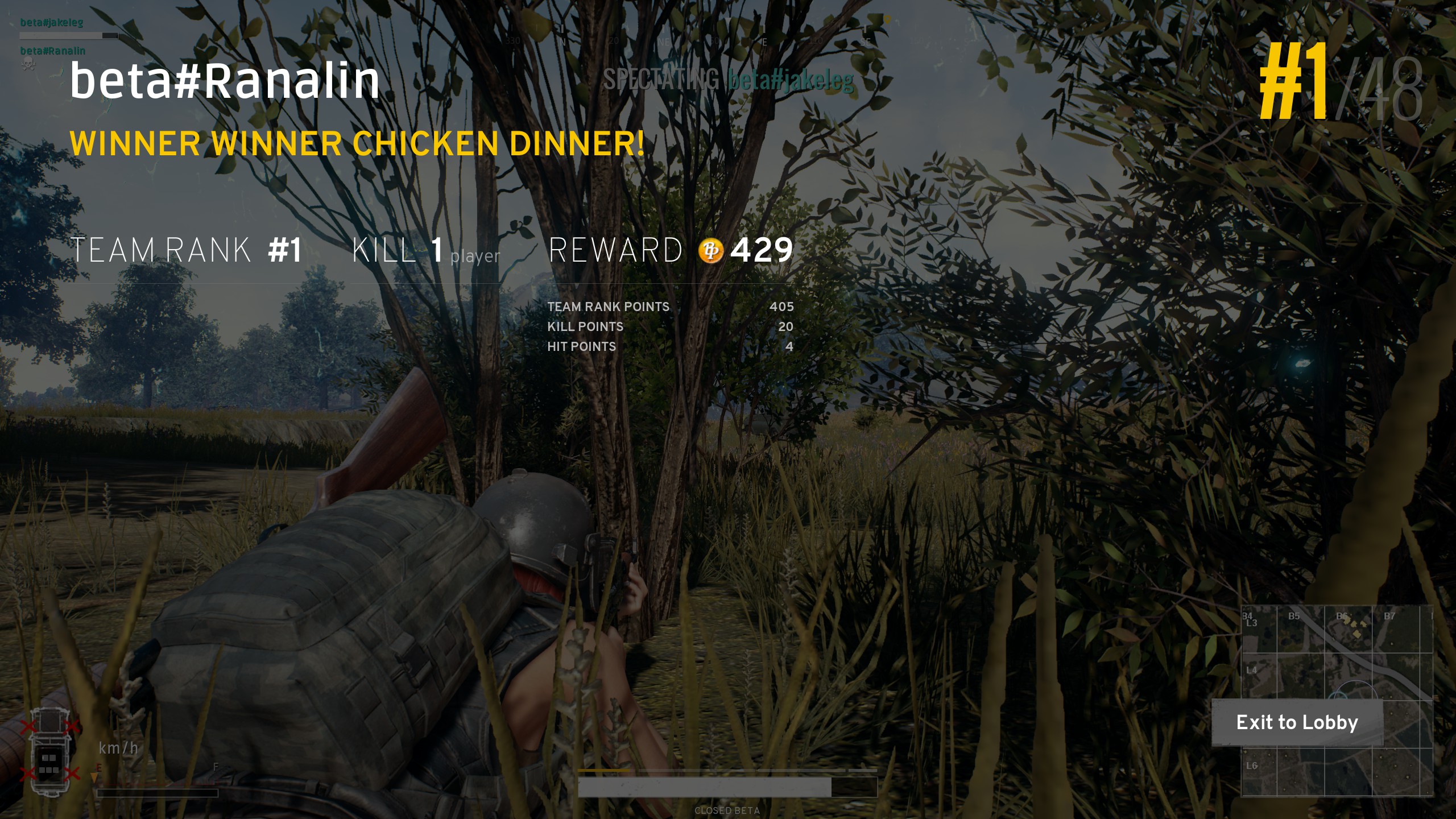 Seems pretty similar to H1Z1: King of the Kill or The Culling. But those are based off that battle royale mod, right?

How long does a single game usually run?

Seems pretty similar to H1Z1: King of the Kill or The Culling. But those are based off that battle royale mod, right?

How long does a single game usually run?

Yea those guys got the idea from his original mod.

The queue times to get into a new match was in seconds.

10-15 isn't bad. That's why I didn't do that much survival in The Division, it averaged around 30 minutes and when running with a group it's take even longer.

I'll definitely keep an eye on it.

I never played the Arms 2, mod but this sounds pretty fun. I'll have to check it out when it goes on sale.

The game is making a lot of progress in the closed beta. It already feels really solid and is a hell of a lot of fun. As ranalin stated, the gunplay is excellent and has a nice dose of realism without it getting too cumbersome. It feels more like Arma than H1Z1 (which is far too arcade-like IMO), but inventory management is a lot more streamlined. There are also no silly crafting mechanics ala H1Z1. Gunfights and tactics are the focus.

Winning our first duo in the screenshot above, was super intense once it got down to 3 or 4 people left. Your heart gets racing when you realize you have no cover in the circle that is collapsing in a few seconds. In the shot above, I low crawled into a bush fully expecting to get sniped, but was able to get a shot on the other guy who inexplicably jumped into a UAZ about 30m away and starting driving. Not that impressive considering the last kill was only my second kill that game, but exciting nonetheless. I think our top kill score game this weekend was 14 or 15 combined, we made it to the top 10 or 20 consistently if we survived past the first 5 minutes.

There is a lot of tactical nuance and thought involved in how you move and use terrain and building over. Having decent FPS shooting skills is helpful, but just having good positioning can win you a fight. (something my old man reflexes appreciate). Really looking forward to the open access release on 3/23 so that the servers will be up consistently.

Playerunknown created the Arma 3 Battle Royale mod and consulted/designed H1Z1: King of the Kill. Battlegrounds is his fully fleshed out version of the game concept he basically invented, but with financial backing and autonomy to create what he wants.

Devs have hinted that they are adding 4 man squad games to the final closed beta weekend starting Friday. Should be a lot of fun! They are also adding melee takedowns -- looks like you can do 1 shot stealth kills:

Changes for this week's beta

Created a channel for this on Curse.

By me and my parachute and the developers who made towers with flat tops! 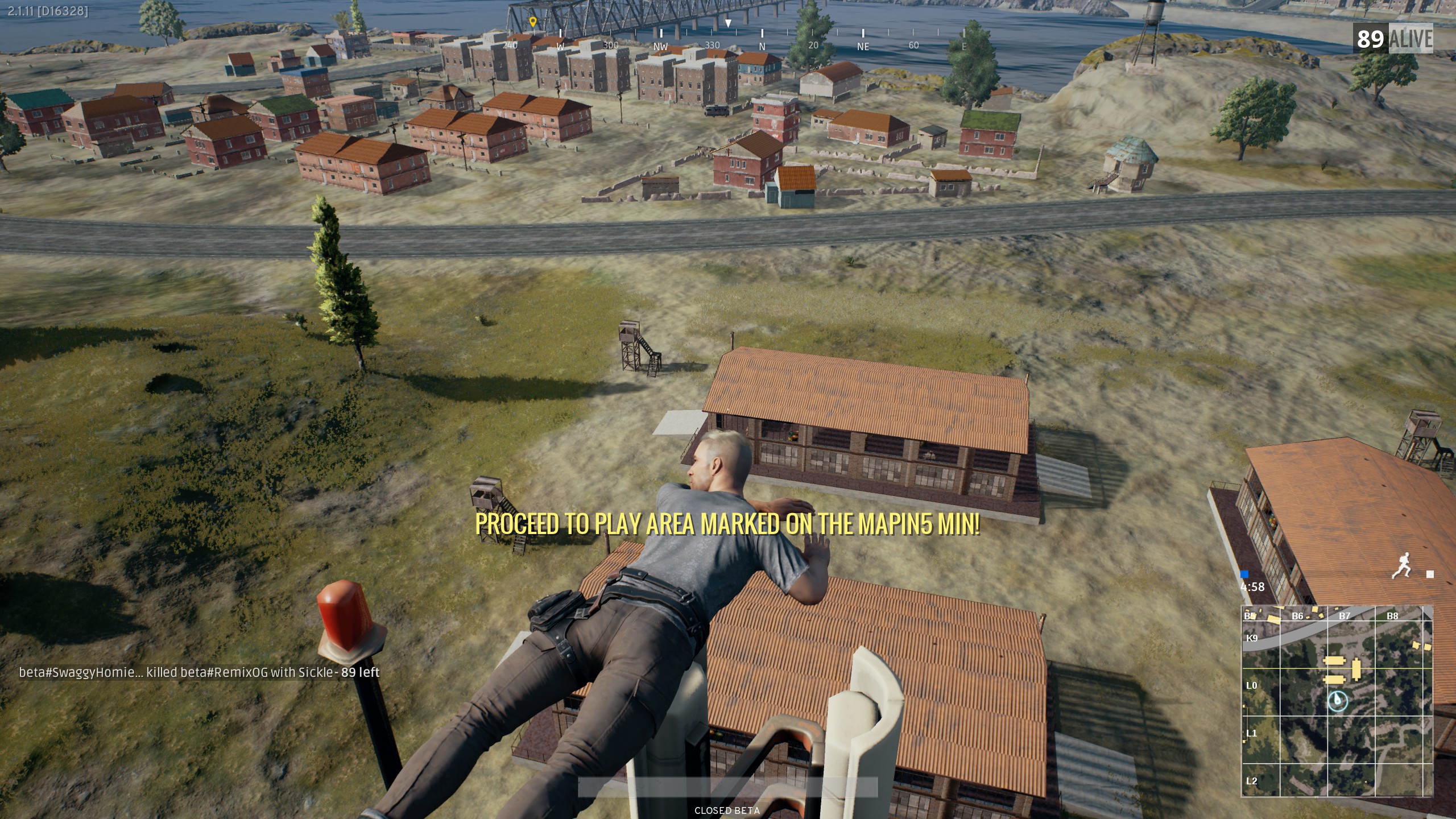 You should get some kind of achievement for that landing.

Beta ends tonight and Early Access starts on 3/23. Really looking forward to being able to play this every day.

This encapsulates all the emotions i had over the weekend. Although the highest i made it was #4

Definitely enjoyed the few rounds I put in. Just did a few solo rounds, and didn't end up going on a binge with the game, surprisingly.

The high point was when I was scooting across an open field, staying ahead of the circle. I was tunnel visioned to my left, after a buggy had passed me and was potentially behind a rise, and then BANG, dead. It was a Saiga that did me in. I was so focused on that buggy, that I almost stepped on a dude hiding in a bush. Walked myself right up to him so he could get an easy shotgun shot on me.

I'll be picking this up, was a bit wishy washy at first so didn't do the preorder they had available for a little bit.

Got my pre-order code, so all set for Thursday. Here's a montage of stuff from streamers playing the beta. There is a section of some incredible sniper shots about halfway though.

I freely admit that i'm surprised that my neighbors haven't complained yet when i play this game. I do squeak.

Just picked it up. My normal GWJ crew are a bunch of turds and won't buy it. Down to clown on some duo action if anyone here is interested!

Jakeleg and I will definitely be playing so hit us up when you see us on.

Also friend us up on Steam! Hopefully there will be enough of us to do a full squad of 4!

They added 4 man groups with the last test this past weekend.

I'll be on tonight. If we don't have a 4th, we can do a 3 man group. We have been using Curse for voice comms.

What time are you guys looking at? I'm most likely not going to be on until 9pm EST, maybe a smidge later than that.

9pm works. We've started around that time and would go till whenever. You can get so many games in that time flies by in a flash. Unless we're in the top 20 if one of us dies we just kinda go balls out rushing or just quit out to start a new round.

One big reminder if you've not caught on from the videos... you have to wait for a vehicle to come to a COMPLETE stop before you get out. Otherwise you take serious damage.

Personally i have issues because playing so much Ghost Recon where you can jump out at any point shy of full speed and be ok.

OK, I'm gonna need all the protips you can give me. I've watched a few hours of the game from streams, but haven't played it yet. Excited to dig in!

How do you get in? Prepurchase only at this point?

Early Access just started on Steam a couple hours ago. You can buy in there.

I'm still looking for a better one and hopefully one that's annotated, but here's a picture of the map.

Plane that drops you off comes in at a random angle each match so it's good to learn the whole thing as much as possible.

OK, I'm gonna need all the protips you can give me. I've watched a few hours of the game from streams, but haven't played it yet. Excited to dig in!

Two other tips are that zooming in is like Arma. You have to double click right mouse button to see through your optics (they actually have different speed settings for each optic in the game which is pretty sweet!). Normal right click just brings the gun to your shoulder and you get the normal tighter reticle to fire from.

When healing try to use your biggest bandage/kits to heal up first and then use your stimulants afterwards. Stimulants heal over time and start from the point of where your health is at the time they start.

Health kits and bandages will only heal you to 75% health. The only way to get back to 100% is with the big med kit or with stimulants (energy drink, painkillers)

It didn't care about it in beta!

LMAO. That is ok Escher77 was taken. However Escher was allowed.