I already hated roadwork. Now I’m doing it from the other direction.

Oh, Hey guys! Hi Guy with beard. Good morning Identical guy with beard. What’s up? You going for chicken wings after work? Hah! Yeah. You know I do!

All right, I’m going to go get to work. What? New Safety glasses? New hardhats too? Ok. Cool. I'll pop over to the foreman.

What do you mean ‘am I trying to be funny?’ I can’t read anything with these safety glasses. 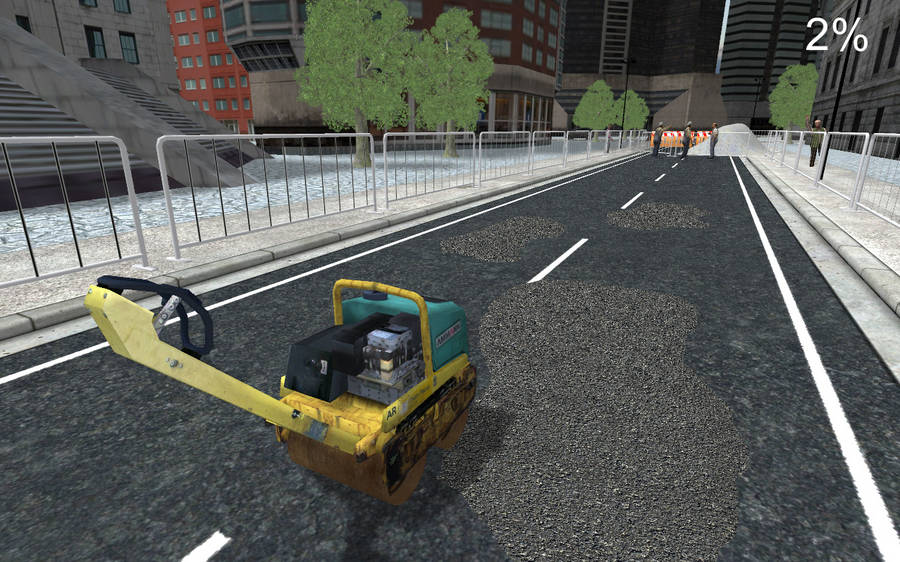 Urgh. Chicken wings? More like Sicken wings, am I right?

Why can’t I move.

Arrow keys? Seriously? I have to walk with my right hand? Yeesh. Do I have to wear this new helmet?

Ok. Well, if the union says so. I’ll just plod on over there, then. 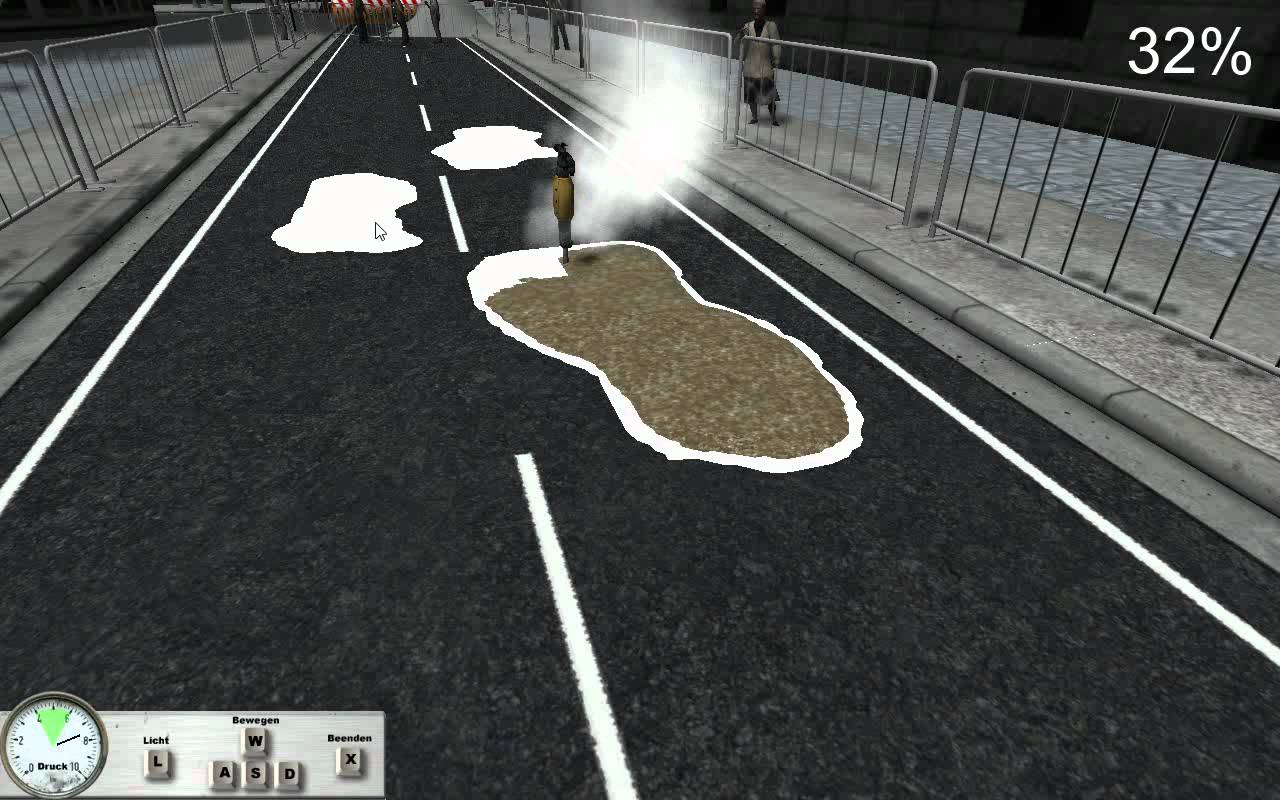 All right, jackhammer. Let’s hammer the jack out of some oddly textured road patches.

What is this stuff made of?

Hey guys! Did the people who redesigned our helmets get to the jackhammer?

If you say so.

Hey that worked! And I can walk with my left hand again!

Oh, but only while I’m holding the jackhammer. Fine.

What’s that, foreman? You need me to clear some debris? From the road? With the front loader? I’m repeating everything you say with a question mark? I should shut up now?

Now, to start up the front loader. At least I can drive it with my left hand.

Arrow keys. Pfft. What were they thinking?

Whoa whoa whoa! I’m only going two miles per hour! Why are the wheels spinning so fast? Is this highway made of Crisco? 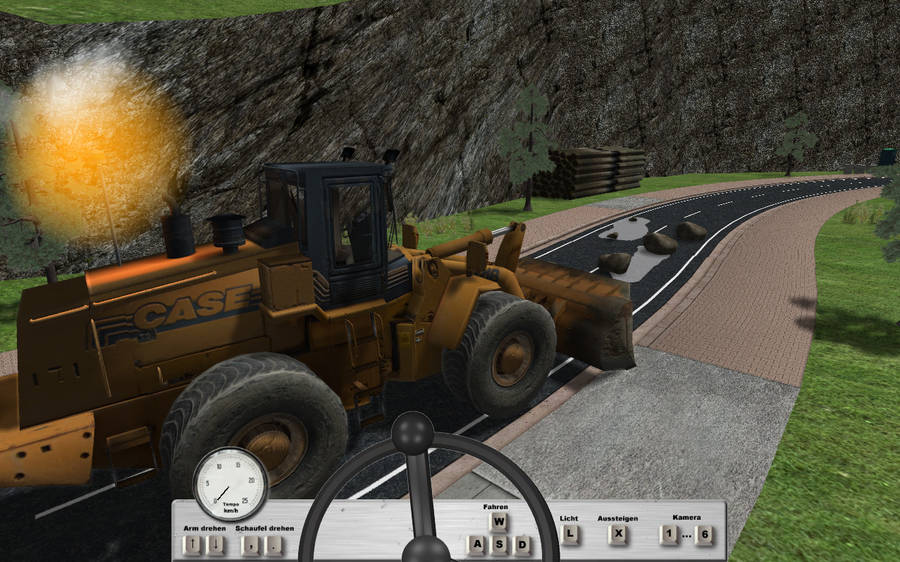 Whatever. Time to scoop some rocks.

Is this a prank? These rocks are bouncing around like gray balloons!

What do you mean, what am I talking about? Look at the things! One of them just floated past the cab.

Yeah, yeah. We don’t get paid to know what the rocks are made of. You’re right. Let me just turn around to dump the rocks in that arbitrary patch of road you guys painted green.

What do you mean I’m stuck? Stuck on what? I backed into a bare patch of grass! Well, maybe the crisco wheels can’t get purchase on rough terrain. Let me try again with that other frontloader that’s over in the same place I started from.

Well, the rocks are still made of solid helium, apparently. I guess I’ve built up a tolerance to the cold. Hey, look! Another three rocks just floating by.

Now, I’ve got a full scoop. Time to turn around … aaaand I’m stuck again. What. The?

You know what? I’m done. You can take this job and shovel it, provided you can get a shovel that actually works. I'm going to go be a farmer. At least they have swimming mole deer.

Is this where the sidewalk ends?

I should have realized a game by United Independent Entertainment GmbH would have been a turd of a game. They're the Uwe Boll of mundane vehicle sim publishers. Well, it's my fault for putting the game on my wishlist and accidentally tricking an unsuspecting-but-generous Goodjer into giving them money.

Unless fixing roads is actually like this, in which case I now understand how the Big Dig went so badly over budget.

After all, if you had to scrap a front loader and buy a new one every time you accidentally drove over a patch of damp grass, you'd go over budget too.

What was the question? Oh, right. No, I won't keep playing. This one ranks with Agricultural Simulator: Historical Farming on the list of games I won't be playing more of.

Is it the Devil Daggers of mundane shovelware?

It is no Devil Daggers. With controls as poorly explained as these, with objectives as impossible to meet as these, with game design so obviously contemptuous of the player, it can only mean one thing:

Roadworks Simulator is the Dark Souls of Mundane Vehicle Shovelware. It might even be the Demon Souls.

And with that, we’ll return to the venerable Dark Souls scale. So even if this game is terrible and broken, it at least returned us to a comfortable old meme. Which is nice.

.. Eleima.. you are dissing my Game of All Time.

I think Eleima was the sponsor, and DoubtingThomas was the author.

But, I also read the whole thing in Eleima's voice in my head.

I've been doing these for so long that it's hard to remember that people haven't necessarily been reading since the beginning.

The idea behind the TLDP review was that I receive a lot of steam gifts; more than I can reasonably play, in fact. So one day I decided to do write-ups of my first hour with them, usually for comic effect, while giving credit to the generous soul who sent me the game.

The first one to run on the front page is here.

The dark-souls thing is a reference to an old meme 'round these parts where people ask if any given game is the "dark souls" of its genre. I started with comparing it to dark souls, then after a year I changed to Bloodborne, and a year after that I compared it with devil daggers. In this one I circled back to the original meme, because I thought it made more sense.

I think Eleima was the sponsor, and DoubtingThomas was the author.

But, I also read the whole thing in Eleima's voice in my head.

Fair, and I think I've read all of them, so I know this, I just misinterpreted it I guess

And, plus, you're not Eleima, so my credibility is shot anyway.

Fair, and I think I've read all of them, so I know this, I just misinterpreted it I guess

And, plus, you're not Eleima, so my credibility is shot anyway.

I wouldn't be so sure. I know I've never seen her in the same room as me...

I had to look up "ketamine."

Ketamine, sold under the brand name Ketalar among others, is a medication mainly used for starting and maintaining anesthesia. It induces a trance-like state while providing pain relief, sedation, and memory loss.

I learned something new today!

I had to look up "ketamine."

Ketamine, sold under the brand name Ketalar among others, is a medication mainly used for starting and maintaining anesthesia. It induces a trance-like state while providing pain relief, sedation, and memory loss.

I learned something new today!

A roadwork simulator leads to people discovering a K-Hole. Yep, it's the Demon's Souls of simulators.