Not to put you on the spot, but what was averted? I genuinely can't think of anything. Asteroids missed us but we didnt have anything to do with that.

well, i'm kind of lumping 20 in with the last decade, and am admittedly being a bit USA centric when i refer to society (the society i specifically live in) but averting to transition into a non-democratic government and the economic collapse that will go along with that.

I don't know that we have averted it. I think we're in the middle of 1933 and the genocides have already quietly begun.

If it's to be described that way, I would say it's more that the genocides have already been happening, we're just facing up to the facts and finally dealing with it, which is pushing the genocidal to go for broke and drop the pretense of being interested in democracy with a small d.

Luckily the fascist leader is less like something out of The Road to Serfdom, and more like something out of a Mel Brooks movie. Who keeps feuding with his own military and security services without building up parallel ones to replace them during a Night of Long Knives. And rather than it being a case of people saying "I am not the people they are going after, so I said nothing" it was like, Day One that a backlash was provoked that has swept the opposition into office.

That's not to say there aren't thing to be worried about, but I think it's a far different situation.

We did avoid the case where Trump loses, whines about it for four years as Republicans wipe Democrats out *especially in the Senate* in 2018, Hillary gets impeached in 2019 but is allowed to run for office again, and Trump defeats her in the redistricting year of 2020. So we've got that going for us.

When I wrote about the lack of excitement for the next decade, I was mostly thinking about how we're really not very nostalgic for the past decade in any way, especially culturally. Rather than look back with fondness on what was and excitement with what will be, it feels like we're disappointed with how the promises of the last decade feel mostly broken, and there's nothing we're looking forward to in the next one besides, like, Baby Yoda. 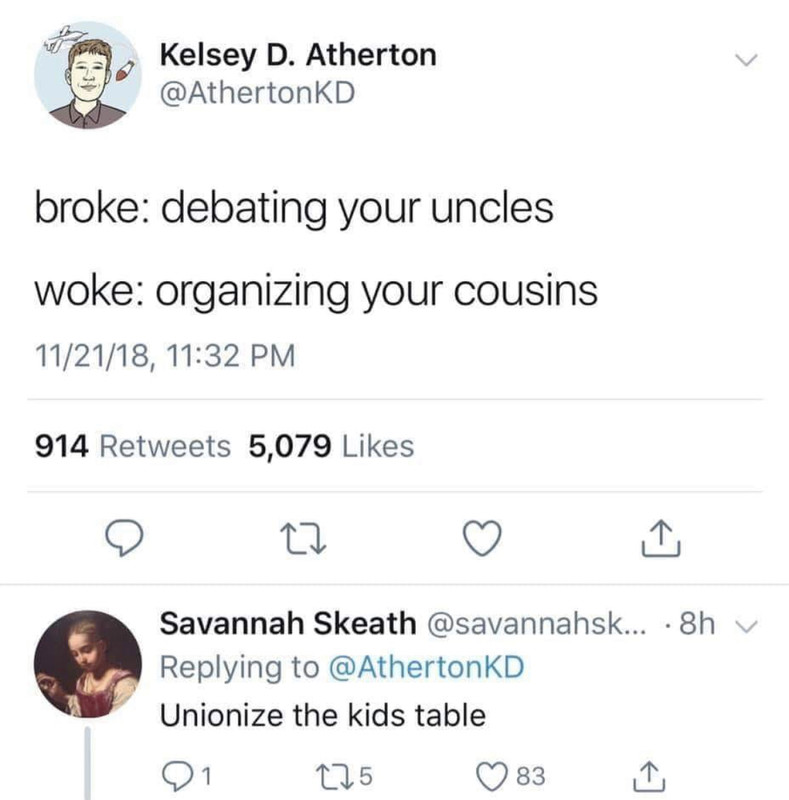 TheGameguru
Posted: November 29, 5:07 PM
Here to save you all

maybe all the trash cans are for throwing the books away eventually.

I guess Charlie Kirk is going to have to find somewhere to hide more boxes of books. 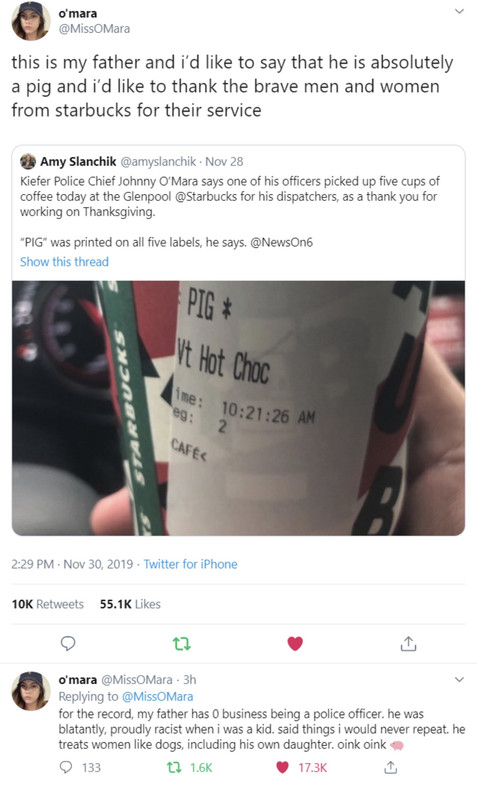 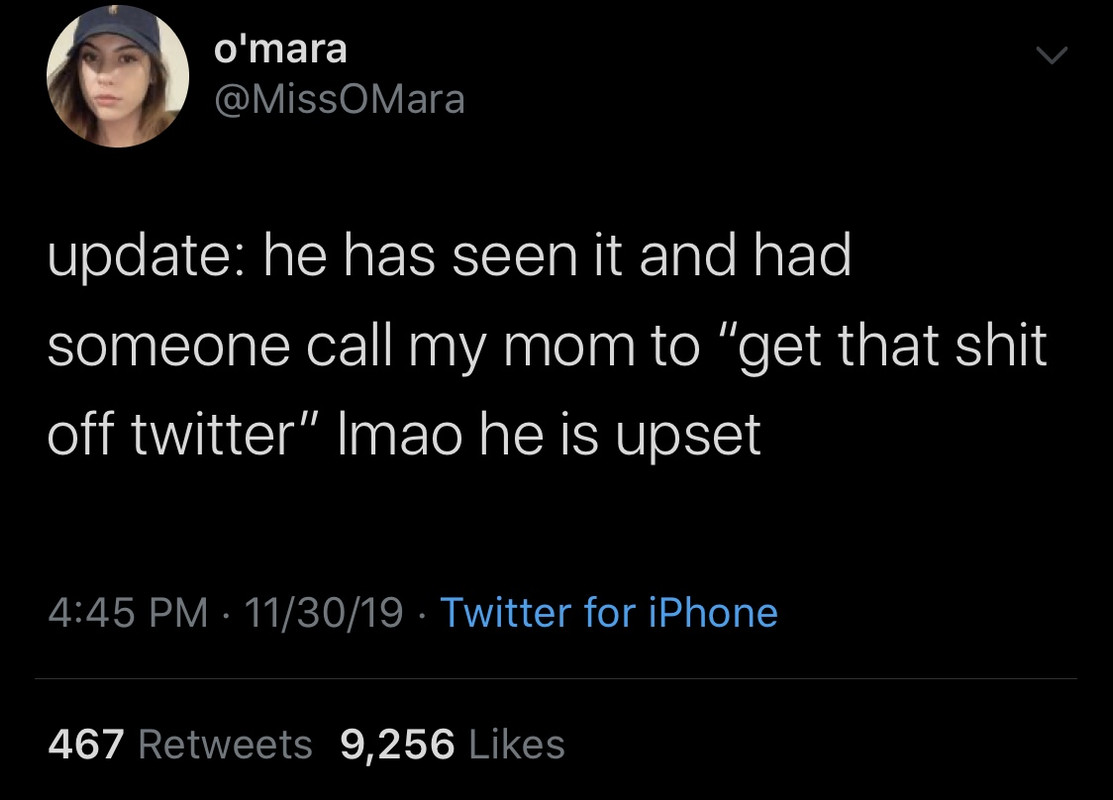 I first saw responses to her, which was fun. Then I went back and just followed the tweets to the picture, and it was even better. It started with “The employees should be suspended immediately with full pay we we figure this out.” Then it Is on, comparing the scrutiny the cops want on this versus the scrutiny cops believe shooting someone deserves.

I saw a post saying that because the name is printed instead of handwritten, it means the order was made online. Which means not only would the baristas not have known it was for a cop, the name 'Pig' is what was entered for the order by the person who ordered it.

So, this whole outage was manufactured.

Edit: Apparently some places print labels for in store orders as well.

I think I was in Starbucks the other day and they computer printed a label for an in store order. 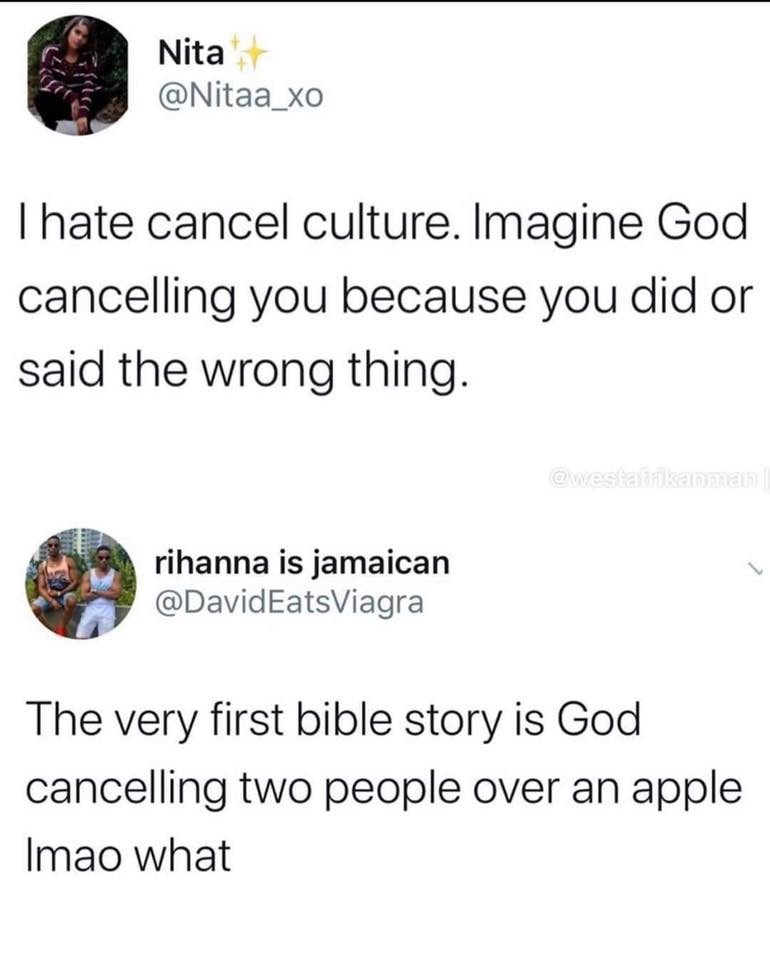 And one of the later stories is him cancelling the whole human race (save one guy's family) to start again.

He basically cancelled Jesus, so there's that.

Noah's entire claim to fame was not getting cancelled.

Imagine your actions having consequences??!! The horror!

Remember when God cancelled every first born male in Egypt?

Noah's entire claim to fame was not getting cancelled.

I mean the whole concept of Hell is basically just God cancelling anyone who does or says the wrong thing.

This one felt a bit ... accurate for me. 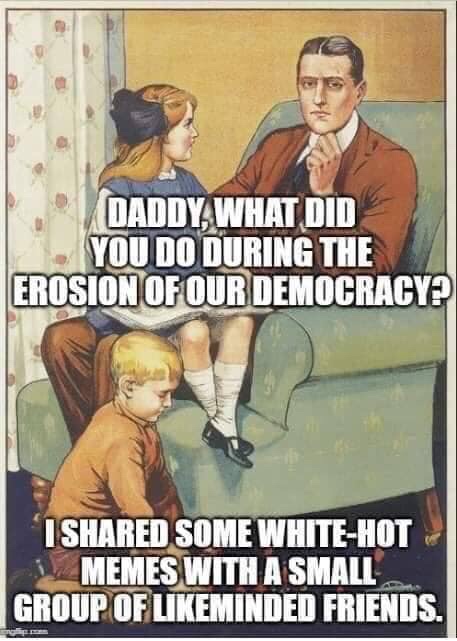 Does "never once voted for the eroders" count?

Stengah
Posted: December 5, 9:12 PM
All Things To All Bots

I'd say it's the bare minimum to not be considered complicit in the erosion.

Does "never once voted for the eroders" count?

I’d say step your game up and volunteer for someone who is challenging one of them. Or better, run for office and keep the eroders out

Or better, run for office and keep the eroders out

This is a nice idea, but really, I have to recognize my own limitations - I'm most definitely not cut out for public office. I'd not only hate it, I'd suck at it hardcore. 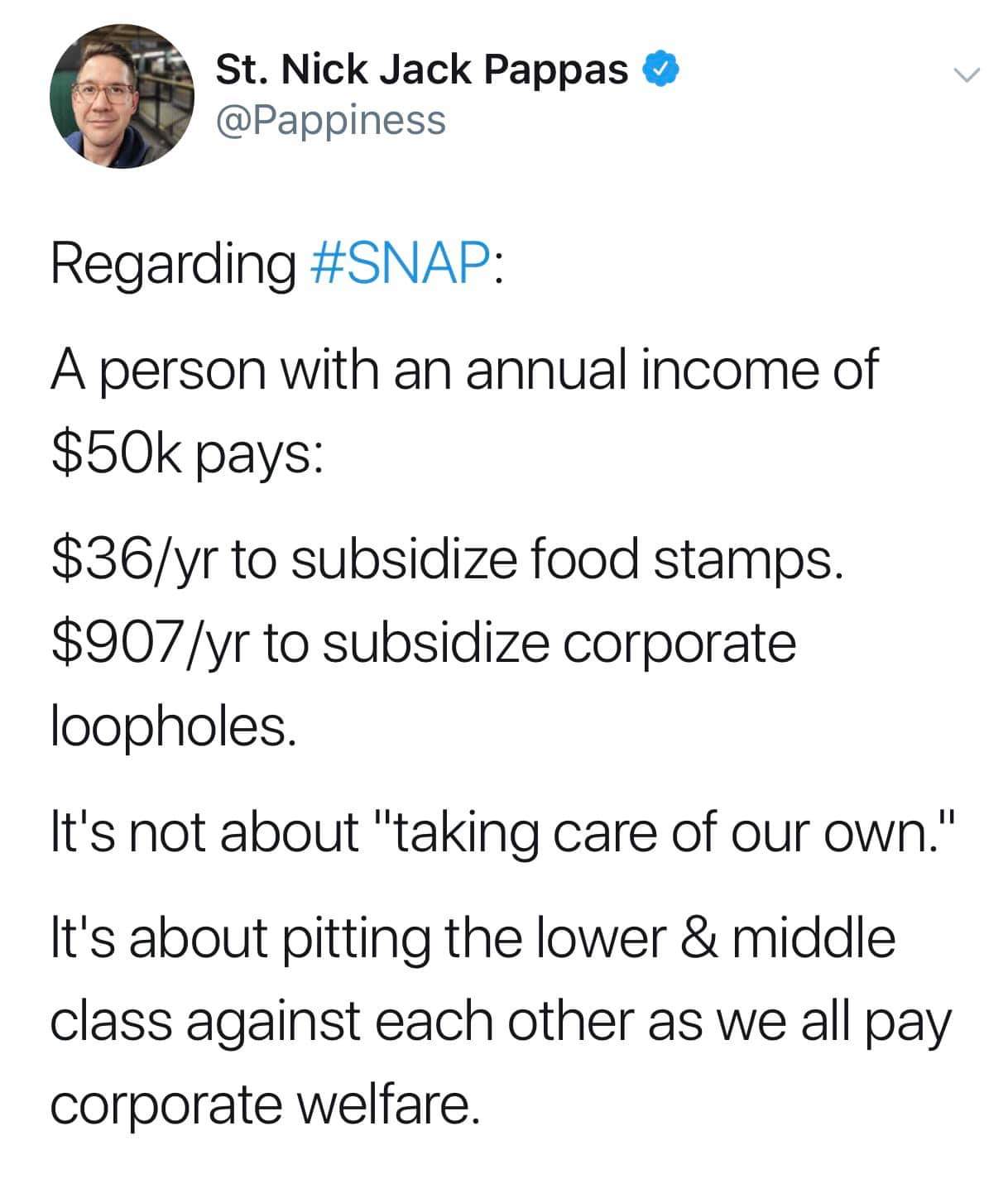 I swear that almost all of people's push back against food stamps comes from one mythical ur-story about how a hardworking and frugal shopper had to buy ground beef while the person ahead of them at the checkout--insert the poor racist stereotype to best fit your audience--bought steak.

Those stories never mention that SNAP benefits average out to about $1.40 per person per meal and that the average household getting SNAP benefits only got $256 a month so if that person bought steak for a special occasion then they're going to be eating a lot of ramen and potatoes for the rest of the month. Nor do those stories mention that every dollar in SNAP benefits generates $1.70 in follow on economic activity while a dollar of tax cuts or tax breaks generates about a quarter's worth of economic activity.

There's a strain of economic puritanism on the right that's terrified and resentful that someone somewhere might be getting they don't deserve. And of course their judgment of who's not deserving is *at best* incorrect and more likely wildly racist.

They're willing to take benefits away from ten deserving people - even themselves - to keep one notional freeloader/crook from getting away with something.

A huge portion of policy is about punishing people even if it hurts others (or everyone) It is far more important to punish than prevent harm.

At the State Dept. dinner for the Kennedy Center honorees Mike Pompeo wondered aloud when he would be “loved”. Then Linda Ronstadt got up to get laurels, looked the f*cker right in the eye and said “maybe when you stop enabling Donald Trump”. Icon. 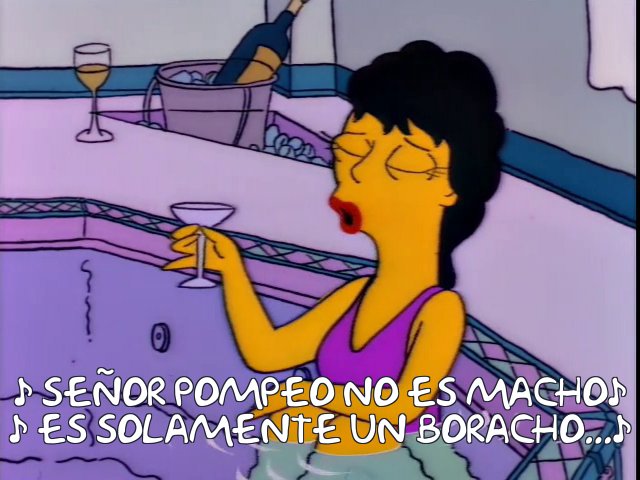 There's a strain of economic puritanism on the right that's terrified and resentful that someone somewhere might be getting they don't deserve. And of course their judgment of who's not deserving is *at best* incorrect and more likely wildly racist.

They're willing to take benefits away from ten deserving people - even themselves - to keep one notional freeloader/crook from getting away with something.

It ain't just the right. Mayor Pete's going after Warren and Sanders' free tuition plans by saying "you don't want to pay for millionaire's kids to get free college, do you?" That's the same thing in different clothes, albeit far less harmful.

Means testing sounds good in theory, but always winds up leaving people out, and winds up being used as a lever to divide and demonize, and to weaker support and a gradual erosion of benefits because it's easier to move the cutoff when it affects someone else. It's the difference in the support of social security vs SNAP. Cut SNAP all day, but think about touching social security and you'll be crucified.