Down to 164 perfect brackets after the first 32 games.

That one was a blow to my bracket (had them as a Final Four team).

Yeah, I can't really say I'm sorry to see them go. Though I wonder if anyone left in the region will challenge Duke.

I have to add, I am not entirely proud of the fact that I experienced a bit of schadenfreude at the wildcats' loss. Not being a dick about sports is tougher than it should be.

Hope South Carolina beats Duke tomorrow. It's funny them having to play a "road game" in the first weekend after all those cozy years in Greensboro.

Well, I know what they'll be talking about at commencement at Northwestern when I go there in June.

Is it football season yet?

And now the tournament just got less interesting. I was hoping for a return trip to KC to take on KU again.

I was rooting for you. The Sprint Center would have been ridiculous. Of course, KU still has to get by Izzo and Michigan State. They totally should, but Izzo could will that team to a Sweet 16.

Assuming Wichita St. goes down (I have them in the finals), my bracket should turn back into a pumpkin by the end of the day (as expected). With Wisky and Purdue advancing, the Big10 has a real shot to show pretty well this year.

f*cking hate Louisville. If I bet against them, they win. Now that I have them moving on, they are falling apart.

Have never been happier to have my bracket blown up. 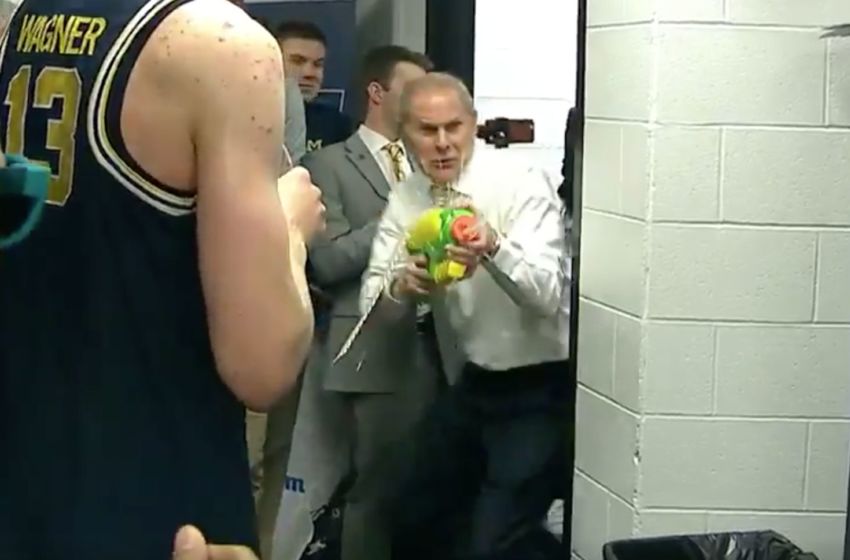 Gotta laugh at the commentators in this KU game. Jackson gets called for a BS goaltending, wiping out a basket. The overhead shot shows clearly shows he didn't touch it, which the commenters noted. Then they showed a shot form the side, from an angle that makes it look like he hit it. Then they talk about how great the officials were for catching that.

I mean, it's clear why the ref called it, but it was still wrong.

KU won, so I don't care. But this is my bracket's these song.

Whoa. Duke is out? Did not see that coming. (I called it a night after Rhodey lost; dammit!)

Sorry I didn't post earlier. I was too busy recovering from the HEART ATTACK I had during the UNC / Arkansas game.

That was a really physical game. They were calling fouls, and then not calling fouls... I really don't quite get the no-call towards the end involving Berry. It was either a block, charge, or walk... but nothing? I mean, I'll take it. UNC's been on the receiving side of some of those mysterious no-calls too, so I guess they were due one.

Should have posted Monday but ESPN is doing the second chance sweet 16 bracket as usual. I never got an email but just thought to check this morning.

Yeah I was watching a 2 point game for a minute there. Damn. 30 point blowout.

I would imagine that the KC Sprint Center is about the biggest home court advantage any team ever gets in Tournament play. Lawrence is about 30-40 minutes away, so even the team is probably staying downtown, they are really are at home. They even play a couple of games there every year. It's a hell of an advantage.

So, I guess I'm going to have Duck for dinner Saturday night.

Best I can tell, with regards to the bracket pool:

Hell of a game. Now UK's Monk was the shot before the shot guy.

Hell of a game. Now UK's Monk was the shot before the shot guy.

Holy crap, what a game. To finally be on the winning side of a buzzer beater was refreshing.

Best I can tell, with regards to the bracket pool:

I beat ukick, that's all that matters to me.

What an odd tourney but I guess they all have been odd tourneys recently. Tournament mis-seedings or something else?

What an odd tourney but I guess they all have been odd tourneys recently. Tournament mis-seedings or something else?

Bit of that. Particularly 2014 where you had a 7 and 8 in the final. Some of that stems from the football realignment. Most of the top Big East teams, except UConn and Villanova, left to the AAC or ACC. But the Big East still gets seeded like the old Big East, and the AAC gets seeded like it's Conference USA or something.

And some of it is the 1-and-done. Talent only gets you so far, and experience can win out a lot of times.

And then the rest is just overall parity. There's a lot of nearly equal teams out there, and in a single elimination tournament anything can happen.

I keep telling you guys Kentucky fans are a special kind of crazy.

Also his Facebook page for his regular work was bombarded with about a thousand UK fan 1-star reviews and had to be taken down.

But the nastiness went well beyond those posts. Sources said the phones at Higgins' home and business, also known as Rooferees, have been "ringing off the hook" since the game, with angry Kentucky fans calling to complain and some even going so far as to make death threats.

That prompted a meeting with law enforcement.

Pat Forde: the lunatics are threatening to overtake Kentucky's fan base

It's time for the good majority of Kentucky fans to speak up - and for the school administrators, who have said nothing this week, to join them. They need to exert themselves and get the minority to back down or go away, because they make the entire fan base appear no smarter or more composed than a pack of wild dogs.

This mob mentality has been festering among Kentucky fans for years - a zeal to attack anyone and everyone who can be labeled an enemy of the program. University administrators have tacitly approved and empowered a thuggish fan element. Combative, paranoid coach John Calipari has never been shy about identifying "bad guys" and fueling the fire.

In this particular case, Calipari got the ball of blame rolling Sunday. His first comment in his postgame news conference: "You know, it's amazing that we were in that game where they practically fouled out my team. Amazing that we had a chance."

For the record, Kentucky was called for 19 fouls and North Carolina for 18.

The main issues for Kentucky fans - and Calipari, judging by his sideline histrionics - occurred in the first half. There were two or three questionable calls against Kentucky (not all of which were whistled by Higgins, by the way). But this much is true: the Cats led by five points with five minutes to play and couldn't hold it.

It was not a game "stolen" by the refs.

Higgins is hardly the first official targeted by Wildcats fans. Three or four years ago they went after Doug Shows, and earlier this year the "corrupt" ref was Roger Ayers.

What do all three have in common? They've been among the highest-rated officials in college basketball for several years and have worked multiple Final Fours. But we're supposed to believe all of them are out to get Kentucky?

There is a nationwide obsession with officiating, and it's not healthy. But the disease might be worst at Kentucky, where at least one website charts every single UK game an official calls, and who won.

Forde used to work for the Louisville newspaper and covered both UofL and UK. He knows better. The lunatics have always been in charge, even back in the 70s and 80s when UK refused to play UofL, mostly because their coaches and fanbase were racists.