I am super hit or miss on this show's episodes. This season I liked Metalhead and the wintry bleak murder one. The rest I was pretty bleh on mostly because of how heavy handed the writing is. Makes me wonder if I would have disliked Twilight Zone if I had experienced it airing.

Yeah, that was one of the two that I really liked this season. 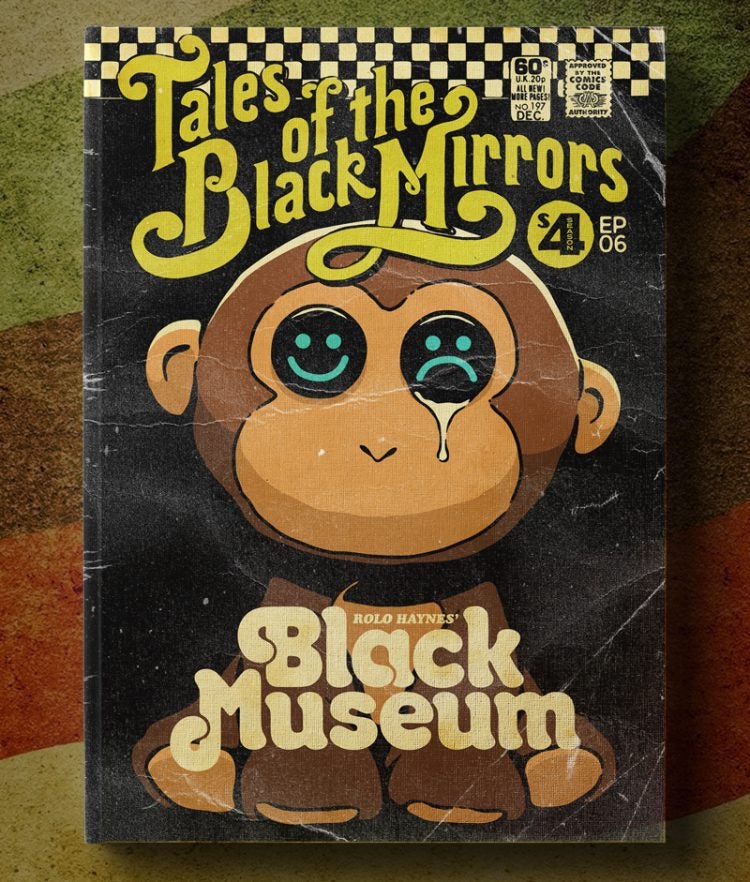 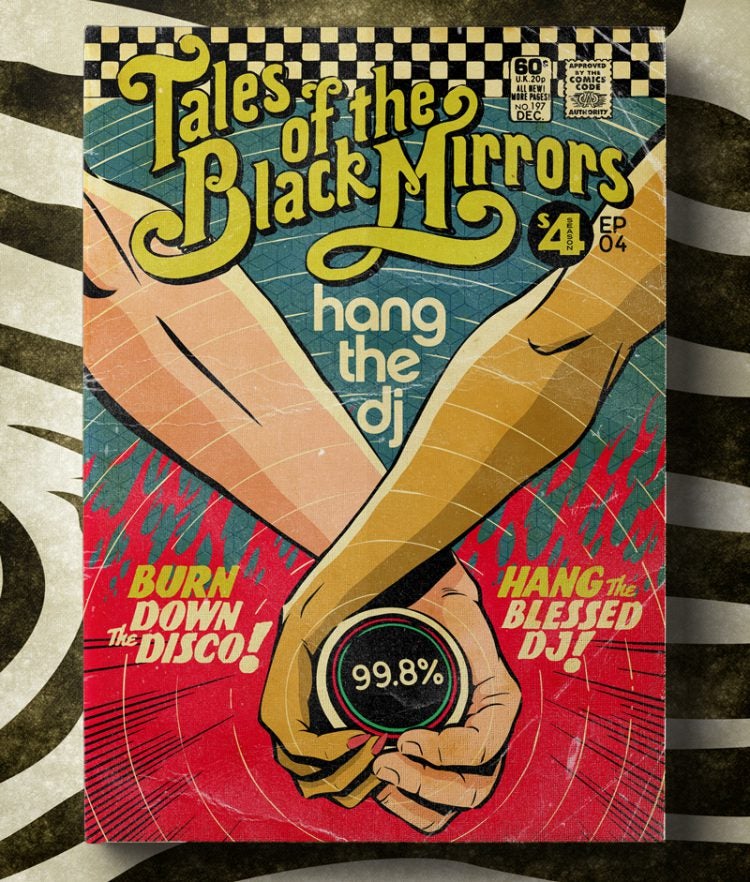 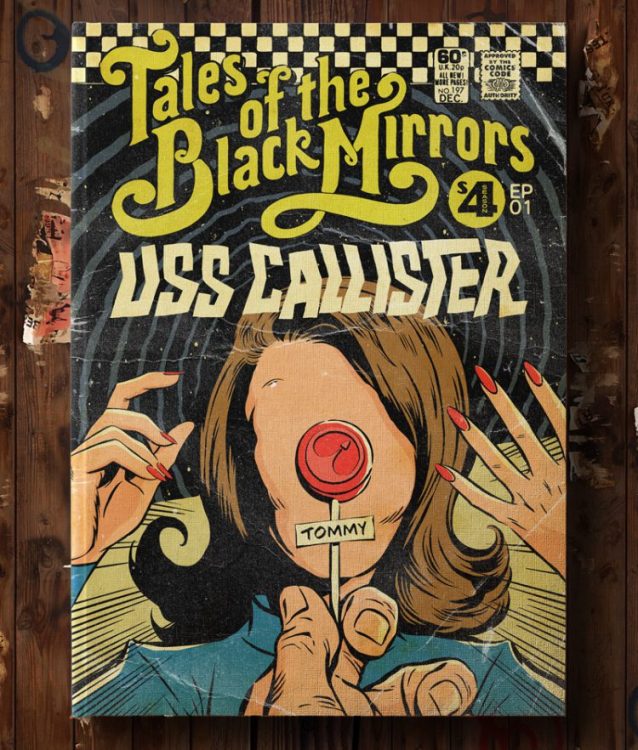 You missed a couple. 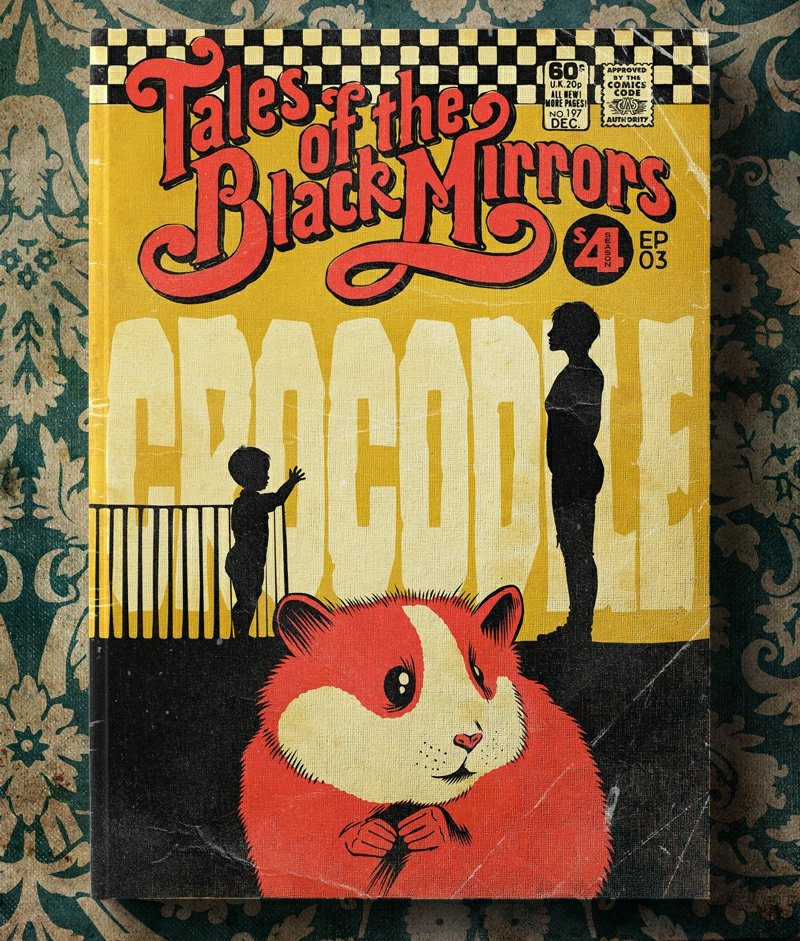 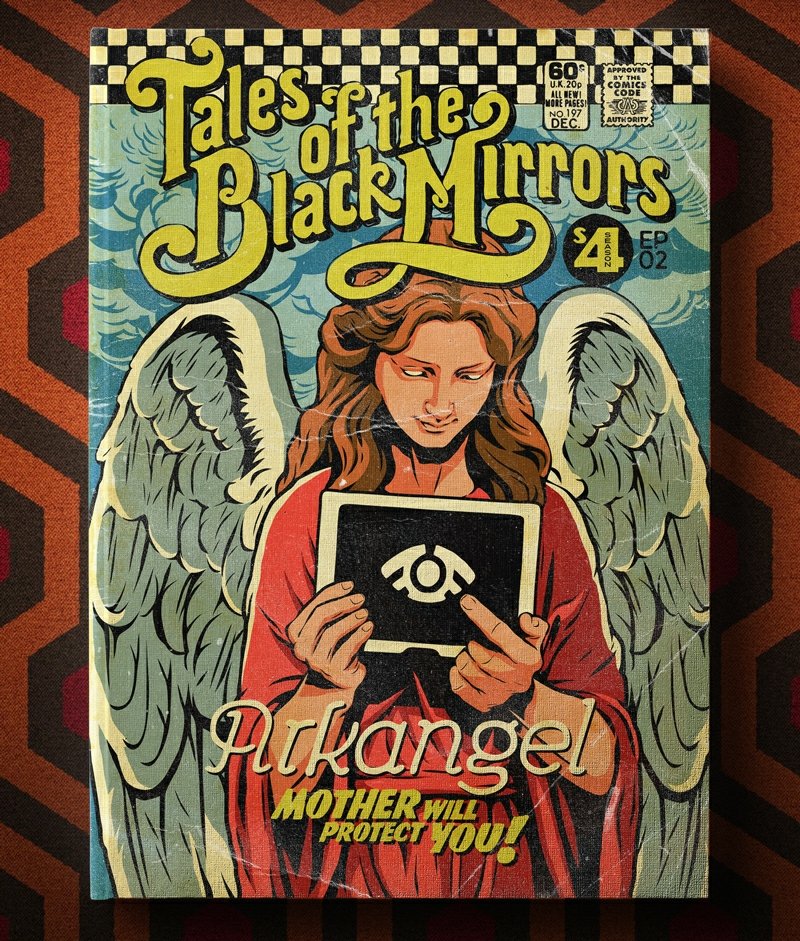 I've been following him ever since I saw his 80s songs reimagined as Stephen King horror paperbacks series. Well worth checking out the rest of his stuff. He also has similar images for previous episodes of Black Mirror.

Looooooove Hang the DJ. Gonna have to watch it again.

Queueing up the last ep now. This season has no misses for me yet.

Thats TOO cool! Also, I love the background of the Arkangel one

The Metel head cover is just the best!

Watching Black Museum just made me think of all the people I wish I had a "souvenir" of.

Even after Arkangel, I think that one wins my "most f*cked up" award.

I'm halfway through Arkangel. Still think White Bear is the most f*cked up episode of the series.

Just watched White Bear what a mind f*ck. I did enjoy the different take on the zombie apocalypse melded with Serenity people just stopped living and were stuck to their phone. I did start to wonder if it was all a sham of some sort like a TV show, the prison aspect was the big surprise.

It was the credits scenes that really got me.

I'm halfway through Arkangel. Still think White Bear is the most f*cked up episode of the series.

It definitely is. Its pretty high up on my list for favorite for that very reason...wait...that made me sound way more disturbed than I am. I'm okay, folks.

It was the credits scenes that really got me.

God, yeah, I am not sure why that part was so disturbing. Its probably how it unpredictably would flash back on; it gave this impression of just unbridled chaos. Which it was.

Finally cleared off space to start the new series, so I've caught USS Callister. It's certainly odd to be laughing at an ep of Black Mirror because it's, ya know, funny. Amid all the horror, of course.

Do I know that feeling, personally? Do bears bear? Do bees be?

Up the River
Tscott wrote:

Do I know that feeling, personally? Do bears bear? Do bees be?

This premise could be Black Mirrored up a little by appending "due to your own moral failings" at the end.

For anyone interested, the latest Very Bad Wizards podcast talks about the episodes USS Callister and Black Museum. It's not a tv podcast - it's made by a psychologist and a philosophy who have informal (sometimes very informal) discussions on morality and ethics, often looking at pop culture and entertainment, this time Black Mirror. One of my favourite podcasts, hence my recommendation!

You've basically described my marriage. My wife has a pop culture blind spot a mile wide, compounded by the fact that we grew up on different countries/cultures.

Arkangel was sort of a slow-mo car crash ep--you know where it's going to go--but there were some interesting little nuances on the way. Also expected, the first bit of commenting I ran into on it was "But everything the mother did was because of love!"

But I also found a fair number asserting that the problem was that the episode could be resolved with one conversation, but that never happened. Which, yes, that is the point--that the conversation never happened. This is one of my key irritations with internet culture's nitpick approach to criticism, walking right up to the purpose, only to proclaim it a flaw. Maybe Booker can write an episode about that?

Also that guy she hung out with? Really not particularly a bad guy.

Working my way through Season 4. Caught Metalhead last night. Loved the crap out of it. Mostly because of how "show, don't tell" it was, but also just due to how much it left unsaid.

Still need to watch Hang The DJ and Black Museum. While I've enjoyed every episode, Season 4 feels a lot weaker than the previous ones. Many fewer mindf***s.

Finally finished the new season, my wife and I made a decision not to binge this time around. I thought it was the worse season with only rating half of the episodes excellent and one episode very poor:

USS Callister was Average. This is one where I thought the implementation of the technology made little sense. One of the reasons I love the series is that it gets a lot of how technology and society interact spot on; usually the evil uses of said technology (but not all) - this episode was just an attempt to be silly. It wasn't bad but I think my expectations for the series sets a higher bar.

Arkangel was barely excellent, much better as a parent. A lot of people see this as about helicopter parenting but I saw it more about how easy it is to slip into being a surveillance state even if you know the harm it does (you are more likely try to manipulate rather than confront directly).

Crocodile was piss poor. Like the overall concept but switching between two main characters didn't work. It would have been better as a detective story from one side or

having the insurance agent see the murder but due to legal issues NOT able to talk about it and how she needs to deal with seeing those things as part of her job I believe would have made a better story.

The baby part at the end also seemed cheap

Hang the DJ was excellent but was trying too hard (but not in a bad way). I've watched it twice. Unfortunately too easy to find the twist.

Metalhead was a "meh". I couldn't put my finger on why it didn't click for me.

Black Museum was excellent and one of two Black Mirror episodes that will give me nightmares (The other being "The Waldo Moment."). Specifically the second story. My wife "figured it out" about a third of the way into the episode but I wasn't even trying to - I was just enjoying the ride. I want to see more of Letitia Wright (she will be in Black Panther) and thank the Great Buddha that Douglas Hodge was cast instead of Penn Jillette because they were just spectacular.

I just got done catching up on seasons 3 and 4. I don't have a lot to add other than I can't believe I forgot how much I love this show. I wish I could show it to my wife, but I think it's overall too dark for her.

I just got done catching up on seasons 3 and 4. I don't have a lot to add other than I can't believe I forgot how much I love this show. I wish I could show it to my wife, but I think it's overall too dark for her.

If you have Amazon Prime, check out Electric Dreams. It's another anthology show, but based on Philip K Dick stories. It's like Black Mirror Lite. Not nearly as grim. Only downside is that it is still kind of finding its footing. The first season is a bit uneven, but more than half the episodes fall somewhere between very good and awesome. None are stinkers at least.

Electric Dreams is on my list. But so is a lot of other stuff.

Just mentioned it because the wife would probably like it more than Black Mirror!

I'm late to the party, but I finally started s4 and I really disliked USS Callister

Other people have already pointed out the flaws with the whole DNA memory thing, but on top of that:

1. So this tech can scan in a person's DNA and create a perfect simulation of them but yet it can't create a digital backup? He needs to scan in a physical sample every time? That doesn't make any f*cking sense.

2. Apparently this guy is acting out his little VR power fantasy because he feels powerless and unappreciated in his job, when he's got some world-changing technology sitting at home. Constructing a perfect simulation of a person from a bit of saliva? If he just went public with that discovery he could be rich and famous beyond his wildest dreams.

3. Building off my previous point, the antagonist in this episode is just cartoonishly evil. They try to do a little fake-out at the beginning by showing him as this sad lonely programmer, but then he goes from there to child-murdering digital rapist in the space of about 10 minutes. He might as well have been twirling a big black moustache throughout the episode.

4. Also, I kind of hate the main character. Her initial freakout is understandable, but then she continues to ignore the other characters and repeatedly attempt things even though they've already explained that they won't work, making things worse for everyone in the process. She just repeatedly f*cks up until the wormhole appears and then suddenly she's the big hero and everything's ok. I mean she finds a way to contact herself and she just sends a cryptic message rambling on about people trapped in a game? She didn't even try to include some private information in there to get her real world counterpart to trust the message.

5. And on that note, she totally f*cked over her real-world counterpart. Real-her just broke into the guy's apartment and ordered a pizza from her personal phone and now the guy's gonna be found dead in there. She's gonna get arrested for sure.

It's too bad because there were some fun visuals and characters in there, but the overall story was just terrible.

So pumped! Not necessarily just about Bandersnatch (since that seems really gimmicky), but I’m always excited to have more Black Mirror.