Discuss the debate as it is on going Monday.

I saw one that was claiming she obviously had a body double that took her place after she had that episode on 9/11.

This is my favorite bit from this week's Full Frontal.

It's probably both. There is no way a woman could beat a man in a debate while having a seizure without another man--smarter than the first one--feeding her lines.

It's probably both. There is no way a woman could beat a man in a debate while having a seizure without another man--smarter than the first one--feeding her lines.

You assume it was a man. I heard it was the devil who was feeding her lines.

You know, for the next debate, I'm wondering if Hillary can directly quote Trump from this debate and get him to say "Wrong, I never said that".

I knew Hillary was the last one.

I for one welcome our new Cylon overlords... did I say "overlords?" I meant "protectors."

Some of Donald Trump's advisers are discussing an overhaul in how he prepares for his second face-off with Hillary Clinton, and one option being floated internally is asking Chris Christie to take a leading role to get the Republican nominee ready.

Then Christie will have TWO train wrecks to deal with. 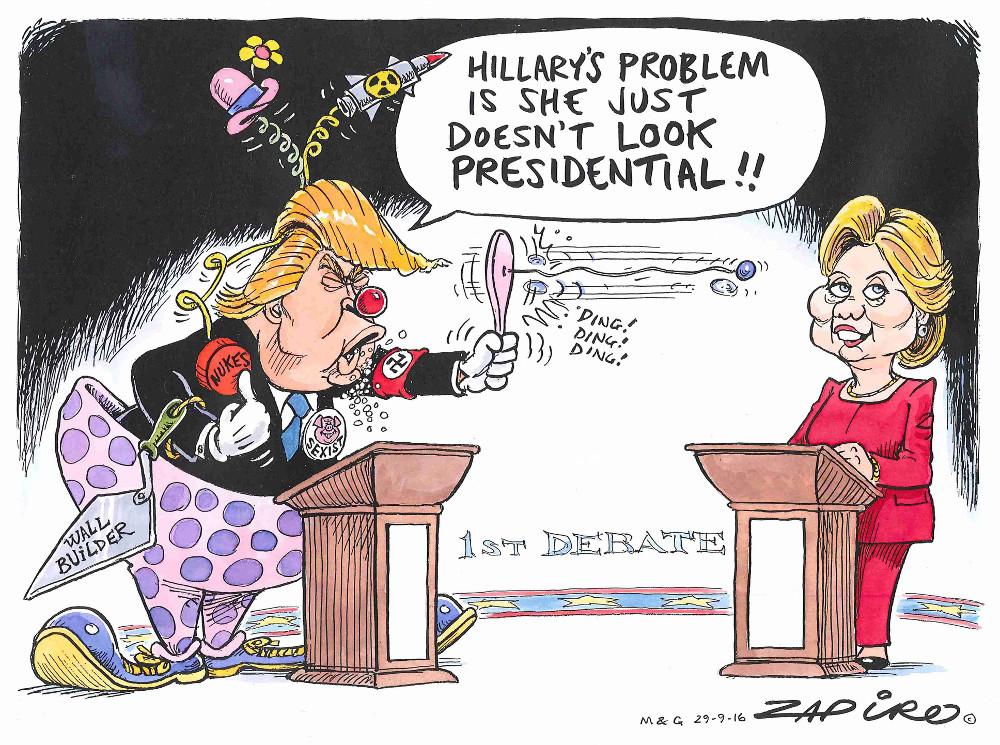 As I've just done some research on this after talking to a co-worker and sending a note back to him, I thought I'd put this out to you folks, too.

TL:DR: Still no change to the ruling that Stop and Frisk, as NYC was using it, was unconstitutional. Holt is right on that. Stop and Frisk itself is still constitutional provided it doesn’t dis-proportionally target minorities. I’d be a lot more comfortable believing Trump and being skeptical of Lester Holt challenging him if he could have backed that up when asked (instead of just, “Nuh-huh”). It’s a major part of his policy proposal and made national news, and recently. Would have been a big coup for him if he could have managed to articulate that on sage.

August 12, 2013 New York’s usage of Stop and Frisk (not Stop and Frisk as a whole) was ruled unconstitutional by US District Court Judge Shira Scheindlin. Included in her ruling were a number of policies and oversights to fix the program.

On October 31, 2013, the United States Court of Appeals for the Second Circuit blocked Judge Scheindlin’s ruling from going into effect and also removed her from overseeing the case, saying some of her actions could have led “a reasonable observer” to conclude that the appearance of impartiality had been compromised. (The panel found no “misconduct, actual bias or actual partiality” on her part.)

On November 9, 2013, the city (under Bloomberg) asked a federal appeals court to vacate Scheindlin's orders.

On November 22, 2013, the federal appellate court rejected the city's motion for a stay of the judge's orders.

On January 30, 2014 Bill de Blasio declared that the City will accept the Remedial Order with certain modifications (yet to dig up what those modifications were).

On July 30, 2014, Southern District Court Judge Analisa Torres issued an Opinion and Order denying the police unions' motions to intervene, as well as granting the proposed modification of the District Court's August 2013 remedial decision. A week later, the City of New York filed a motion to withdraw its appeal. (Again, yet to see what the actual modifications were)

On October 31, 2014, a three judge panel on the Second Circuit unanimously ruled against the unions and allowed the city to proceed with its overhaul of the police department

That guy has one soothing voice. He was talking about something that boils my blood, and talking critically and comprehensively, but I actually feel a little better after watching that.

thanks, you were able to articulate a knot of feelings I wasn't being able to understand.

He's critical and comprehensive. I hope that video makes rounds, because he drives a lot of points home.

Despite this clearly being a political cartoon, I found it actually funny. Thank you, good sir.

I quite liked the one in our local paper

I read that one as anti-Hillary. As in "She's playing the same old game when the rules have changed".

All I know is he's about to impale himself on quite a few chess pieces, which will hurt and possibly puncture something important.

I read that one as anti-Hillary. As in "She's playing the same old game when the rules have changed".

I don't think it's particularly partisan. From outside of the US it looks like they are playing different games.

crooked Hillary with her book on secret "insider moves" of chess ?

I'd read that cartoon as being very pro-Trump; note that Hillary is looking away, with her head in a book, while Trump's about to ruin her carefully planned game. And, because he's in midair, the implication is that the upset is inevitable.

I mean, unless it was accidental... Trump is still going to miss Hillary and land on that table. Cape suggests he's already going down and not with enough forward momentum to hit Hillary.

I thought it was pro Hillary but skeptical about her chances.

Is Trump wearing a "White Rage/Fury" cape in the cartoon? And how soon before all the fashion forward alt-righters start to wear one?

Is Trump wearing a "White Rage/Fury" cape in the cartoon? And how soon before all the fashion forward alt-righters start to wear one?

I mean, unless it was accidental... Trump is still going to miss Hillary and land on that table. Cape suggests he's already going down and not with enough forward momentum to hit Hillary.

Hillary wasn't his target. She's playing chess, being strategic and prepared, but the election is now a lucha libre match, where style and entertainment is more important, and he's going to smash her game.
I don't think it's pro-Trump or pro-Hillary, more a commentary on the current state of American politics. It could be slightly pro-Hillary, since the world spectating thinks Hillary is better and is confused about Trump.

Yeah, I didn't read it as favoring either candidate either, just pointing out that they are playing two vastly different games.

His cape says something like, Blanco fortunato or "fortunate white" right?

I took it to mean he's simply destroying everything with no regard to anything . It's certainly interesting to read the opinions of other folks though.