Drop the "Trump" bit and I kinda want to party at that club.

Nobody Noticed Trump Holding These Puppies Hostage During The Debate

Turns out Colbert is a pretty big Gordon Lightfoot fan!

So, so signing up for your newsletter...

(much easier than searching for these in between diaper changes...).

If you go to her youtube channel and select the playlists category then you can watch all the episode segments in order. Worth it.

That slays me, farley! I am slain.

Stabbing a copy of The Art Of The Deal with a Basilisk’s tooth is the next step to eliminating Donald Trump, according to experts this morning.

Donald Trump howled in agony and demanded a flask of serpent’s milk to help him recover some strength after the destruction of his first Horcrux on Hollywood’s Walk of Fame yesterday.

Trump, whose unusually-styled hair is believed to hide a face on the back of his head, is understood to have concealed fragments of his soul in multiple receptacles in an attempt to protect himself from defeat in the forthcoming election.

Fragments are believed to be hidden in places as diverse as the fabric of Trump Tower, a p*ssy he grabbed without warning in 2003, and Mike Pence’s unnaturally shining white head of hair.

The last Horcrux is believed to be the one national poll which has shown him in the lead. If destroyed, this would cause his organisation to fail and his acolytes, known as the Debt Eaters for their habit of bankruptcy, to disband.

“The Orange Lord is not concerned by this petty attack,” said a spokesman for the Trump campaign.

“Only a cowardly child would act like this, and Donald challenges his attacker to meet him in debate where he shall win, and win, and win again.”

To show he meant business, Trump took off his jacket and rolled up his sleeves to threaten anyone who would wish him harm.

However when Trump handed his jacket to his spokesman to hold, the spokesman cried ‘Dobby’s Free!’, and vanished.

Trump and the GOP Crack-Up: A Closer Look
* I really don't like Seth Meyers delivery but I like his writers a lot

I didn't know this thread existed, and it is great, so I'm tagging it the old school way.

And throw in an old Onion article, because I think it's good to read this every once in a while and remember.

Ben Affleck stars in a hilarious PSA about voting in New Hampshire.

Ben Affleck stars in a hilarious PSA about voting in New Hampshire. Trump is Right. This Email Debacle is Worse than Watergate

*EDIT* Not 100% sure, but this might be too serious for this thread. Does it belong in the Clinton thread instead?

In terms of funny it certainly doesn't belong but for mobile users it is nice to have videos all in one thread....I don't know.

Why am I not surprised that Tucker Carlson is too clueless to realize the agenda of his guest is not going to line up with his? 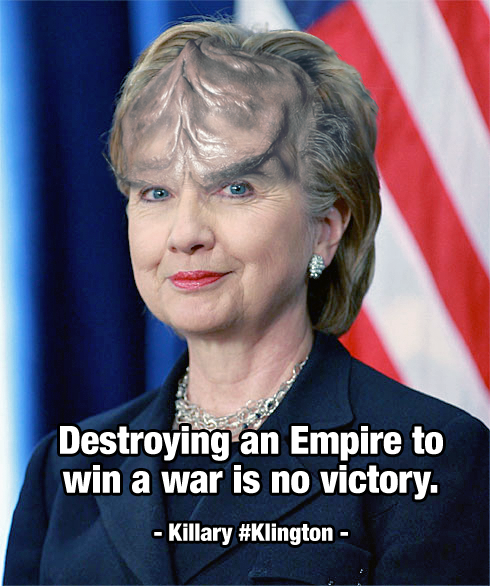 Neither am I, but at least she has honor.

I'd say pro-Hillary. Worf was the one who said that (quoting Kahless, the legendary 1st emperor of the Klingons), warning an unstable leader that did end up almost destroying his empire trying to win personal glory.