This thread is just to post interesting news, thoughts, opinions about climate change.

Pretty sure the people super concerned about migration would be perfectly happy with the idea that the people migrating should stay and die. They're going to see it as a personal choice to live there and dying from a "natural" disaster is just a consequence (you see, its natural, so it's not like it's their fault), the same way they see living in poverty as a personal choice. 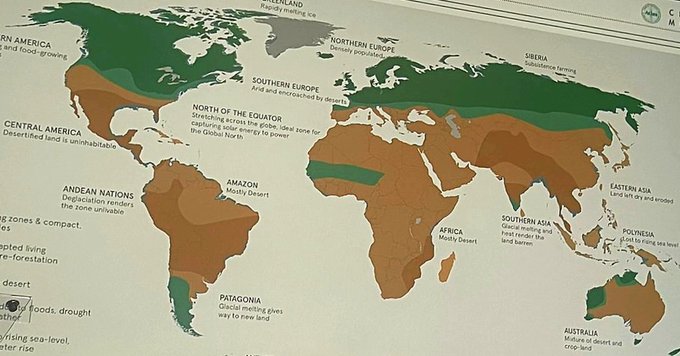 Yesterday, I attended a conference at which an influential financier shared this unpublished map. Look at it. The estimated death toll is 2-3 *billion*; the timeframe is 20-30 years (previously: 50). Segments of the elite have simply 'written off' large parts of the Global South.

The gathering was a psychedelic symposium. The vast majority of attendees seemed dedicated to working on climate solutions; many had been inspired by plant medicines. But it is also becoming increasingly common in these circles to hear about the coming 'shedding'. It's disturbing

There is a lot to say about this map. It looks like a death sentence, but it is a sketch of a shifting picture, which we still have the power to revise. But what is troubling is that some *are already acting on these assumptions* – and the politics (of climate refugees) it infers

Glaciers across the globe - including the last ones in Africa - will be unavoidably lost by 2050 due to climate change, the UN says in a report.

Glaciers in a third of UN World Heritage sites will melt within three decades, a UNESCO report found.

Mount Kilimanjaro's last glaciers will vanish as will glaciers in the Alps and Yosemite National Park in the US.

They will melt regardless of the world's actions to combat climate change, the authors say.

The death of a cyclist in Berlin has prompted leaders of Germany's Green party to accuse climate change protesters of endangering the lives of others.

The woman was run over and trapped under a concrete mixer lorry on Monday.

The fire service says a specialist rescue vehicle was delayed by traffic because of a climate protest held by a group called "Last Generation".

News of the 44-year-old woman's death emerged on Friday.

There was a robust response from Robert Habeck, vice-chancellor and a senior figure in the Greens, who are part of the governing coalition government.

"Anyone who risks the health and life of others loses all legitimacy and also harms the climate movement itself," he said. "Some protests by some groups are now doing just that."

Deputy government spokesman Wolfgang Büchner did not blame the protesters for the woman's death, but stressed their actions should not break the law.

Last Generation confirmed that some of its members had staged a protest several kilometres from the site of the accident. They'd positioned themselves on a gantry over the A100 - a major route into the west of the capital - which led to police officers reducing what is usually a busy motorway to a single lane of traffic.

In a statement the group said that the "entire media system" had turned against them, adding their members were distraught by the death.

"We know that our protest is uncomfortable in many ways. Every day we confront people with what we would all like to ignore," they said.

Sounds like a failure of dispatching, police traffic control, and some good old scapegoating.