This thread is just to post interesting news, thoughts, opinions about climate change.

Record temperatures on Monday forced the cancellation of hundreds of train services, while flights at Luton airport were stopped after heat “melted the runway”.

Roads and trains were quieter than usual on Monday morning as many people heeded advice to stay home if possible in the heatwave – but UK transport operators warned the worst was yet to come.

Train cancellations and delays started to accumulate in early afternoon, with speed limits brought into force at midday as temperatures edged into the high 30Cs.

Passengers on one incoming easyJet flight from Italy were told they were being diverted because of “bits of tarmac melting” on the runway.

In France and the UK extreme heat warnings were issued while northern Spain recorded temperatures of 43C (109F) on Monday.

Wildfires in France, Portugal, Spain and Greece have forced thousands of people to evacuate their homes.

The UK is expected to see its hottest day ever and experts say parts of France face a "heat apocalypse".

Wildfires in recent days have forced more than 30,000 people to flee, with emergency shelters set up for evacuees.

Gironde, a popular tourist region in the south-west, has been hit particularly badly, with firefighters battling to control blazes which have destroyed nearly 17,000 hectares (42,000 acres) of land since last Tuesday.

"The idea that comes into my head is, it's a monster," Jean-Luc Gleyze, the president of the Gironde region said of the fires.

Why were the trains on the airport runways to begin with?

Why were the trains on the airport runways to begin with?

They weren’t on the runways, the trains were canceled because people delayed at the airport got bored and found some old racist tweets the trains made ten years ago.

So far no heatwave in Greece (but we usually do have a week of 40-45 C. these days).
On a side note, now that I am the counselor for sending our students to universities in the US, I have let them know I have no plans to send anyone to Texas...ever.

Like their electric grid, they have their own platform for applications, which is only for Texas. Screw Texas. But the extra app is the least of why I won't send students there...

Like their electric grid, does the application fail all the time and then have that failure get blamed on renewable energy instead of capitalism?

I saw earlier that in regards to the trains the rails are only meant to withstand 95F.

It’s shocking how complicated and dependent on constant daily safety maintenance work modern railroads are. Very interesting too how different countries meet those universal needs, from high tech automated systems to highly trained humans. Only takes one type of problem to throw everything dangerously out of whack. And heat can cause multiple issues…

UK Breaks Its Record For Highest Temperature As Heat Builds

Maybe we will do something since it is white folks that are finally being affected! 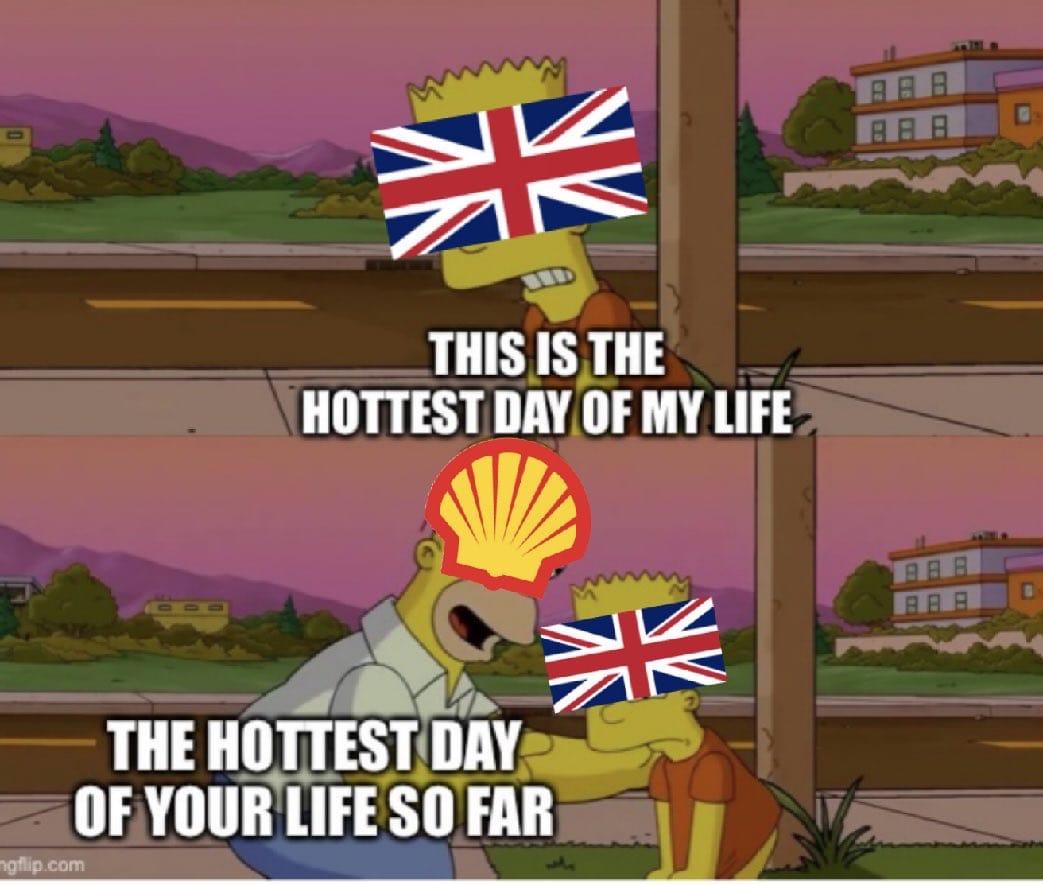 What's going to happen socially and politically when Christian Nationalists in the South are forced to move North to escape the weather their Party caused?

They will blame poor people of color and move into their homes.

A letter to my younger self (Postcard from the Climate Crisis; July 2022)
*very long IMGUR post - which is mostly not images. Kind of not what I expect from an image hosting site but it is worth reading

The climate crisis is happening now, obviously, and we are trying to fight it WHILE coming to terms with the idea that the only viable solutions will be ones that grasp the complexity of human civilisation. Which is a pain and slowing stuff down. And making folks feel depressed. But progress IS actually being made. We just gotta see the campaign over the timeframe of 2005-2085 is all.

By the way- if I was really writing to myself in the past? I would SO include 7 random winning lottery numbers and the dates of their wins. I would ‘Back to the Future’ the living hell out of stuff. Just so we all on the same page here Imgur.

That is a weird phrase to read without context.

I mean, not since college...

No, she's an imgur legend though. A warning though, lots of sexually themed My Little Pony fan art posts.

No, she's an imgur legend though. A warning though, lots of sexually themed My Little Pony fan art posts.

I was reaaaaaaaaaaaaaaaaaaaally hoping that the username was just a joke, and not, say, a description of their predilictions.

‘A wake-up call’: as extreme heat hits UK, experts say net zero is the only way out

Hundreds of firefighters battled blazes across England on Tuesday as temperatures surged to a historic high of 40.3C, capping two days of extreme heat that scientists warn is “a wake up call” for the climate emergency.

In what climate experts labelled “a grim milestone”, the previous record temperature of 38.7C was first broken at Charlwood in Surrey before noon and then surpassed at Heathrow, which broke the 40C mark at 12.50pm. By 4pm at RAF Coningsby in Lincolnshire, the thermometer showed 40.3C – a full 1.6C higher than the previous 2019 high, which was exceeded at least 34 sites across the country.

No, that was Elysium on one of his Twitch playthroughs of Dark Souls.

A clip from Don’t Look Up, and then a real TV interview that just happened

Twitter I can't embed but it is tragic, depressing, and funny

A clip from Don’t Look Up, and then a real TV interview that just happened

Twitter I can't embed but it is tragic, depressing, and funny

Nothing surprising there. I loved the movie precisely because of how horrifyingly spot-on it was.

Hell, I am dealing with a marriage conflict that could nearly be lifted out of the film and I don't know how we are going to resolve a very real and challenging fundamental ethical difference right now.

I hate this timeline so very, very much.

UK Breaks Its Record For Highest Temperature As Heat Builds

Maybe we will do something since it is white folks that are finally being affected!

Meh, white folks have been dealing with this for some time. It's here to stay, unfortunately.

The audacious PR plot that seeded doubt about climate change

Impressed that I have moved towards of a position of "some of these people should be exhumed and have their bodies desecrated".

This is just the beginning. The 2030's are gonna be quite a ride.

In the "probably should have been done 5-10 years ago" news, PG&E is digging to migrate power lines underground. It is a good thing. But if it had started 5 years ago, it'd have been done by now and saved countless millions (billions?) of damage and lives.

Yeah a new house development went in off a side street from us with all power underground. 3 times in the last 2 years we've had extended 6+ hour outages. But I can look down the street and see those houses all with power. It sucks.

Our whole city was designed with underground power in the 1960’s. Love it.

Is anyone else seeing an eminent petrochemical industry crash?
Sure for a long time yet, there will be the affluent that park their 727 at the local Piggly Wiggly or statewide roll coaling.
But pretty darn quickly, the trickle up of the downtrodden migrating from uninhabitable areas of the world will cause a public backlash. Of course we already have anti immigrant backlash, but at some point it will turn towards oil conglomerates. We already see one angle with the popularity of Tesla and Prius.

I just see too many walls closing in, especially in light of the recent oil price crash. Eventually, that will start to happen more and more regularly. Then there is the conflict happening between WFH and the ever worsening commute/traffic.

I know we have already done some irreparable damage. But life has proven resilient so I would expect some things gone to return. I think nature may force the issue sooner rather than later and we might be able to get to a point where we prevent further damage and deal with a much harsher new normal.