Does anyone have any thoughts on the Great Canadian Baking Show?

Does anyone have any thoughts on the Great Canadian Baking Show?

It's far and away our favorite of the international shows (that we've seen, at least), and well worth watching if you have the ability. It's probably the closest to the British version in terms of production value, and the judging and hosting staff are universally delightful -- particularly Bruno Feldeisen, who is the one constant throughout all available seasons. (You even get Dan Levy as a host for the first season, although sadly he was too busy with Schitt's Creek to continue after that.)

Since we're talking international Bake Off shows, I also highly recommend the Kenyan Bake Off. The production values and contestant skill levels are understandably lower than some of the others, but there was so much genuine creativity and heart in the work done that it was wonderful.

New Zealand Bake Off is also decent, although we found the judges and hosts a bit less enjoyable. That said, we still had a great time watching all seasons that were available.

Irish Bake Off seemed charming enough, but unlike the Kenyan show it didn't manage to overcome the lower production values and contestant skill levels, so we dropped off after an episode or two. We'll probably come back at some point when we need a nice dose of cheer, though.

Australian Bake Off lost us within 15 minutes. The first season was produced in the style of an American reality competition show ("I'm not here to make friends!") and thus completely missed the point. After reading that they adhered closer to the more gentile standard formula in the second season we gave it a try, and while that seemed to be the case, I think we still had such a bad taste in our mouths that we didn't really get past the first episode there, either. Like the Irish version, though, I imagine we might come back and give it another go eventually.

I think that's all of the English speaking versions that are available, other than the American version that we didn't even bother with after reading terrible things. Of course, if folks had opinions to the contrary and there is maybe a season that's worth watching, I'd love to hear about it.

Also, I'd be curious to know if there are any versions that are from non English speaking countries that might be worth giving a try, presuming they might be available with English subtitles.

Thank you very much for that incredibly thorough explanation!

Canada and Kenya will be acquired. The rest, sod off!

A second season of the Kenyan Bake Off aired last fall, and Canadian Bake Off is now two episodes into its fourth season, and I can't recommend either highly enough for anyone who is able to watch them.

As I said about the Kenyan Bake Off above, the production values and overall skill of the bakers remains lower than most other bake offs, but almost as a direct result of that, the spirit and the joy of the show is all the more pronounced. The second season was even more of an absolute heartwarming delight than the first, and I'm already eagerly anticipating the next one.

Meanwhile, even just two episodes in to the Canadian Bake Off and I'm not sure I've ever been so impressed with nearly the entire field of competitors. We shall see if ultimately they can top some of the highest highs from the British seasons (such as the top competitors from seasons 4 through 6), but I won't be at all surprised if they do given what we've seen so far. Beyond that, Bruno and Kyla are back, and remain my favorite judging team across all bake off shows, and the new pair of hosts are just as warm and fun as everyone else who's done the job for the Canadian show.

The issue with the Canadian series is that the judges are always way too nice. A baker could give them a complete mess that would make Paul Hollywood give them a tirade about not learning lessons or managing time properly and their feedback is basically "I bet this would be beautiful if it turned out the way you wanted!!!"

Canadian...s... are always way too nice.

For those that care: 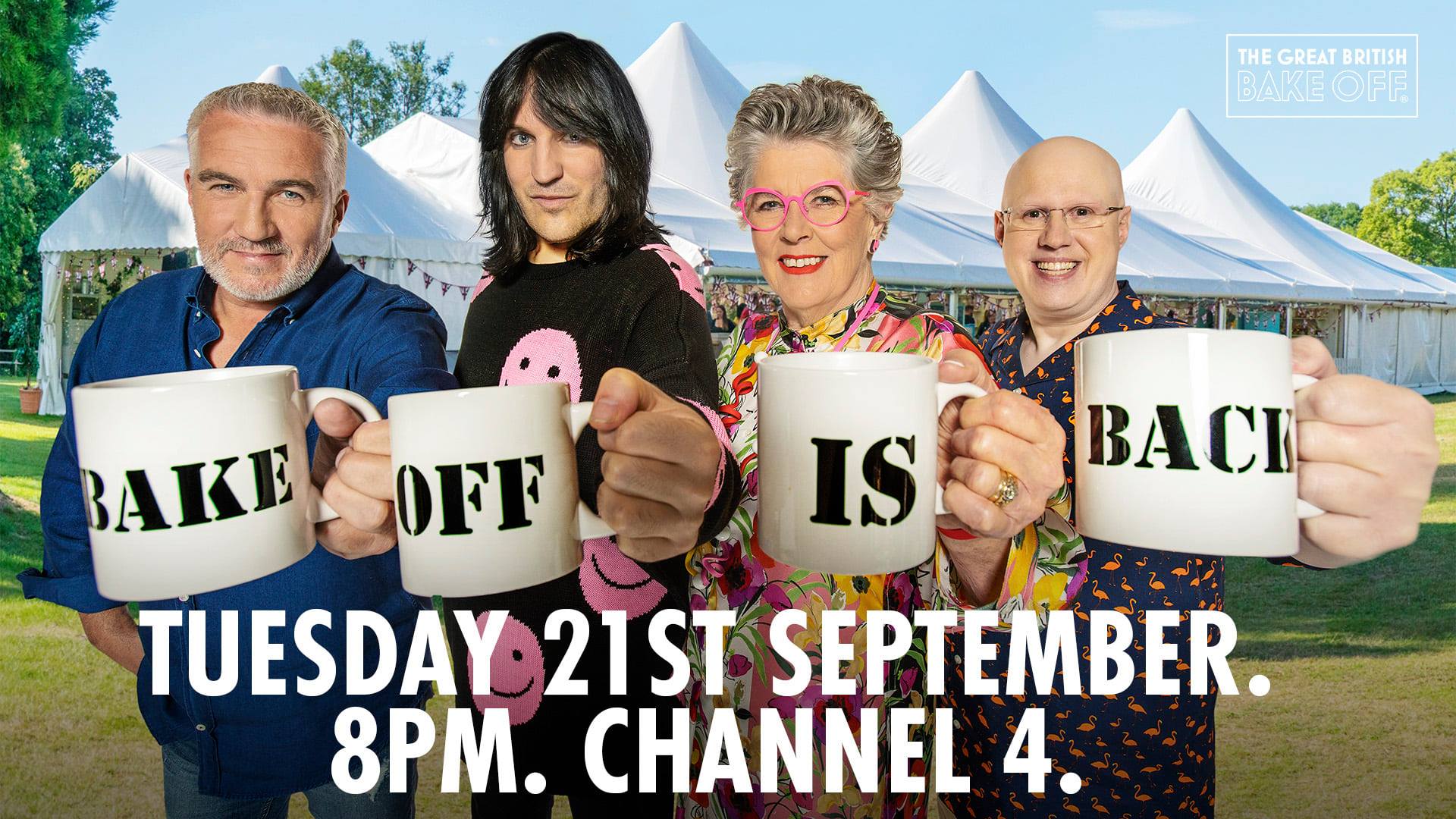 Nice, and timely. That will be Sept 24 for us Netflix-watching Americans.

Ahhhhhhhhh. Tuesday evening, the bake off is on (my word did channel 4 cram a lot of ad breaks into it though! There's going to be a lot of complaints about that) and suddenly the world isn't quite such a dark place again.

A very continental spread of bakers this year, with what I thought was a quite a tough first show with mini rolls, malt loaf and a gravity defying showstopper. There were some very good successes, nobody really slipped up on the Technical (except maybe one) and good selection of superb showstoppers and others where ambition very definitely got the better of some of the contestants. Flavours most definitely saved one or two from the chop.

A deserved winner and I thought the person going home was a little unlucky. At least they actually finished their cake properly.

Well, the nice thing about waiting for it to hit Netflix is no ad breaks. Episode was extra long and they had a few spots where the editing allowed the camera to linger. Not sure if I like the longer episode or not, pretty much indifferent at this point, but the early episodes will benefit by giving more screen time to the contestants who leave early.

And, really, that's the real reason we watch the show.

So, kinda bored this season. The extra long episodes seem to exists solely to give Matt and Noel a chance to do longer jokes. Yeah, some more time is spent with people, which is super nice in the early season, but there's a slight lacksidasical feeling setting in to the show.

The quality of the baking has been top notch though.

I've been enjoying it so far but that might be because the two people I immediately liked appear to be two of the best. I haven't really noticed the extra time. Maybe it's all being used so the editor can creepily linger on Freya more. I swear she's every other shot.

Is it just me or has Matt gotten worse as a host? He has just been bad this season to me.

Is it just me or has Matt gotten worse as a host? He has just been bad this season to me.

Meh, he's an odd duck, never cared for him.

Has Paul just decided to be human? He seems to be genuinely having fun this time. Making jokes, fourth wall breaking, not being the Serious Judge. I like it.

Has Paul just decided to be human? He seems to be genuinely having fun this time. Making jokes, fourth wall breaking, not being the Serious Judge. I like it.

The collapse of Amanda's terrine pie, while entirely predicatble, was pretty dramatic

while retaining the essential human touch the series has always displayed.

I saw Paul Hollywood live a couple of years back - he was doing a tour of the UK, baking a few recipes, talking about his life and career, getting people up on stage to have a go and was exactly like he was on today's show. Personable, likeable and the very first person in the room to start tittering at the slightest hint of an innuendo. And it was very much innuendo week this week.

So, just watched the semi final and I have to say it was probably the best I’ve ever seen 4 bakers bake in the Bake Off. They all nailed their signatures, made a bit of hash of an extremely difficult technical (yet still one they were all capable of achieving) and some out of the park Showstoppers

I genuinely felt that none of them deserved to leave. They all could have been star baker I think.

It’s a great semi-final. I think it may be the first I can remember where there wasn’t an obvious back marker. I am gutted the one who missed out has missed out but that’s why it’s a competition.

As an aside, we have started watching Birtain’s Best Worker on Channel 4. It’s bake off but for joinery. Mel (of Mel and Sue) presents so the humour is gentle ribaldry and the focus is very much on the woodwork. Available on 4od for those of you in the U.K. (or with VPNs).

Google ruined who got knocked out this week. Booooooo Google.

Google ruined who got knocked out this week. Booooooo Google.

Facebook ruined it for me. It didn't outright state who left but my word it took a sledgehammer to it's hints.

God damn f*cking Facebook telling me who the winner was before I’ve had a chance to watch the final. ARGH!!!!!!!!!!!!!

Edit: Well, after the official Facebook post being top of my Facebook wall this morning (thanks Facebook!) the actual final wasn't any of the bakers finest hours. Some good, but not excellent carrot cakes, a slightly bemused technical that had me laughing a little (Instructions: Make Belgian buns using lemon curd and sultanas) - I'm still mildly surprised any baker in the bake off hasn't taught themselves how to do something like a Belgian or Chelsea bun, it comes up quite regularly, but some good quality showstoppers which was - unfortunately - one contestants downfall when they totally messed up one of their components. Watching someone's dreams get crushed on the final judging is never nice to see, but they took it well.

This has been the best bake off of the Channel 4 era by some distance I think - good bakers from about the 3rd week in, some really excellent bakes and a memorable, cheerful and overwhelmingly nice group of contestants. Looking forward to the Christmas specials.

That was a highly enjoyable final in part because day 1 was such a doozy.

I can't help but feel the Technical was designed to crown someone other than the newest baker.

Yeah. Jurgen flamed out the week before and the winner came real close of flaming out in the end. You could see the stress starting to tear apart the winner once they realized that they could go all the way. On the other hand, the winner was one of the very best bakers they've ever had on the show.

The final four were a really strong group, with two of them coming out of nowhere.

It was one of the better seasons.