I just discovered this thread, and read through it all, including Farscry's epic and excellent recap of the series!

My own experience with the Metroid series is strikingly similar to Farscry's, down to starting with the NES original (but not owning it or finishing it at the time) and progressing through the series from there.

I wonder if Nintendo hasn't made a new 2D Metroid game for a long time because they aren't sure how to (1) make it feel fresh gameplay-wise, and (2) tie it to past entries in the series in a meaningful way.

In a "standard Metroid game", we all know that Samus starts with nothing except a standard gun and maybe a morph ball ability, and then from there goes on to acquire all her normal stuff: missiles, bombs, high jump boots, ice beam, Varia suit, and so forth, eventually culminating in the screw attack.

Axiom Verge managed to feel fresh by giving the protagonist a whole different set of power-ups, including

a variety of selectable "standard" guns, the short-range teleport, and the remote-control drone, among others.

Metroid Fusion did show that Nintendo was willing to depart from the standards a bit, for example by giving Samus "ice missiles" instead of an ice beam. They plot-justified this by talking about how an ice beam wouldn't work with Samus's virus-infected condition. I'd be happy to see new games move along these lines while, as Farscry says, not even needing to address the differences plot-wise.

Maybe Nintendo could give Samus a daughter (or granddaughter, or other descendant), complete with a new power suit and new power-ups to collect. Konami certainly did this kind of thing for a long time with the various members of the Belmont family being protagonists in the Castlevania games.

So, I was all set for playing through Metroid, the original, thanks to the release of the Nintendo Classic Mini. No crouching. No diagonal shooting. On second thought I think I'll play that copy of Zero Mission.

Maybe I'll give the original another shot. It may be one of those lost to time, though.

Yeah it's tough. Despite the story changes in Zero Mission, it's preferable to replay it than the original nowadays.

I decided to give Metroid the old college try. It took some adjustment with avoiding enemies more often than taking aim with the arm cannon. I usually obliterate every last critter in a hundred mile radius. This tweak, due to no crouching and no diagonal shooting, brought Samus' traversal skills, enemy movement patterns, and the level design to prominence. In time, though, I turned that into getting the necessary angle to take aim, with help from (morph ball) bombs to deal with ground level foes. It's more playable than I had considered, in a roundabout way. Also, the screw attack is instant victory. Still, it's not one I forsee myself returning to once I see it through.

Those Zoomers (enemies that crawl along floor/walls/ceilings) really are a more interesting threat in the original Metroid game, where you initially have no way to deal with them when they're crawling along the floor at the same level as you due to the inability to crouch, shoot at an angle, or shoot downward while jumping.

It's interesting that, although those enemies appear in pretty much every 2D Metroid game, they really only represented an interesting gameplay mechanic/challenge in that very first NES Metroid game. After that, they've pretty much just been in there for the nostalgia value, since the ability to crouch and to shoot diagonally makes defeating them trivial.

I always figured they were there to be a nuisance while platforming because they block certain segments of the platform as they crawl around.

The wave beam dealt with them well. I didn't find it until late in my playthrough, though. Other than defeating Ridley, it was the ice beam all the way.

Also. I can finally say that I completed the original Metroid. The room that housed Mother Brain was tricky. I may have let slip some colourful language. It's not a game I see myself returning to. The sequels really took the formula forward, to a place that's difficult to step back from. Nevertheless, I'm glad I stuck with it to have a broader view of the series. It all stemmed from this.

I always figured they were there to be a nuisance while platforming because they block certain segments of the platform as they crawl around.

A "nuisance" enemy is a good way to look at them, yeah.

Possibly also a kind of stealth tutorial for the player on the usefulness of the diagonal aiming: 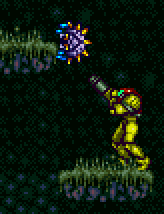 I can finally say that I completed the original Metroid. The room that housed Mother Brain was tricky.

Having played through the end of Metroid, that first horizontal corridor in Super Metroid where enemies appear will make a lot more sense to you now (if it doesn't already)!

I'm thinking Super Metroid may be next. I own it on Wii U. Either that or Metroid Prime 2: Echoes, also on the Wii U. Or Zero Mission on GBA SP/DS Lite. Curse my indecision.

My playing order is a toss up. I started with Metroid II: Return of Samus. I moved onto Metroid Prime. I followed that up with the original Metroid. Chronological order be damned. Release date be damned. Oops.

Maybe I should get Other M or Hunters out of the way. I see folks like to scrub them from record.

And then Fusion is last.

And skip Other M. By far the worst.

I looked up a video as I was reading that I should have had it by now, only to see someone locate it as one of their first items. Oh well, at least my wall jumping and bomb jumping skills were sharpened out of necessity (as I couldn't freeze platform enemies).

Edit - Naturally, just after looking it up, I stumble upon the necessary map station that would have led me straight to it.

Collecting all of that stuff before Ice Beam is impressive!

I guess it's also a testament to the openness of the Super Metroid game design that doing so is even possible!

I completed Super Metroid tonight. 14 hours with an 87% rating. I thoroughly enjoyed all aspects of the journey. It was a good evolution from the original two games. The hardware boost definitely helped, but the ideas were also on point.

Draygon was my solitary moment of bewilderment. After coming up short, badly, a few too many times, I looked up a hint. It was brilliant. I wasn't grasping such an approach, but I could most definitely appreciate it upon discovery. This caused me to think outside of the box more than I had been. Bravo.

It's such a well designed game. I can see now why it's the pinnacle of the series for many.

Congrats! I still need to do Prime 2/3, Other M, and I guess Federation Force at some point. I will absolutely go to bat for Fusion and Zero Mission if those are of any interest to you. Like a lot of things, Fusion got a lot of sh*t by the Internet at launch for not being what the Internet wanted. It's seriously good even if it doesn't quite hit the same highs of Super Metroid (and as one of the rare people who've now played the first three games some of the plot beats might hit you better than most).

I wouldn't really call Federation Force a necessity to play. I like it and I want to defend it but it's honestly got no impact. It's not disappointing, it's not a magical mess of good ideas with bad execution, and it is good enough to be a good time but to basically be done when it is done.

Of course, that's speaking as a solely single-player experience. The game might have been more enjoyable with multiple people, and the mission design was definitely good enough to support it. Varied, too. But by having to be playable single player some of those missions became frustrating or tedious as the process was longer, and chances are limited what they could have done if they went whole-hog co-op experience.

Every other Nintendo game is objectively better than Other M.

Every other Nintendo game is objectively better than Other M.

Every other one? So odd numbered releases or even numbered ones? And are you counting things that they publish but don't develop like Professor Layton?

I almost said every game ever. But I have to allow for things like Atari ET.

So yes every 1st or 2nd party Nintendo game. Other M is the worst.

Wait, I thought only every other release was better. Now they all are? So confusing.

Donkey Kong Jr. Math must be worse than Other M!

Donkey Kong Jr. Math must be worse than Other M!

Probably more true to the character of Jr. than Other M is to Samus.

Perhaps I should back away from Other M slowly, never to know of the horror it holds. Samus is not to be messed with. Samus is a one woman wrecking crew. Knowledge. Wisdom. Strength. Ingenuity. Heart. This is the picture I get across the four games I have played. I accept no other depiction. I know nothing of Other M and I now wonder if it is better that way. Why must curiosity be calling me!

Yep. Other M contains some subservient little soldier who is so dumb as to keep her Varia suit disabled while exploring a heat damage area, even to the point of dying... all because the man in charge hasn't given his permission yet.

I don't know who that is but it is not interstellar bounty hunter Samus Aran.

Perhaps I should back away from Other M slowly, never to know of the horror it holds.

This is a wise decision. Whether you like the game or don't, that's not a conversation worth wading into.

M isn't that bad. Don't let the story bother you and its a decent game. I was able to play all the way through it and enjoy it for the most part.

8 years and I still love you people.

Nevertheless, I bet it's out before most of what Sony showed off in 2015.