The group of GOP heavyweights hopes to enlist the help of Trump's children - who comprise much of his innermost circle of influential advisers - to aid in the attempt to rescue his candidacy. Trump's family is considered to have by far the most influence over the candidate's thinking at what could be a make-or-break moment for his campaign.

Amid a pileup of self-made political disruptions, mounting Republican defections and internal staff exasperation, Donald Trump is proving himself to be a candidate running a presidential race all by his lonesome.

With little regard for the GOP's future, he continues to antagonize its most prominent elected officials. With an uncontrollable proclivity for tumbling into a tangent on any given target – no matter the time, relevance or risk – he regularly relinquishes control of a media message. Having no capacity to absorb even the slightest political attack, he is constantly lured into petty fights that place him on the wrong side of public opinion. And with little reverence for seasoned political advice, he alienates even those who want to see him recover and succeed.

Trump is a party of one – a candidate embarking on his quixotic and increasingly improbable quest for the presidency without a compass or a map, without a front-line defense shield or significant reinforcements, and always and forever without any regrets.

Even the Lone Ranger rode a horse named Silver; Trump seems quite content to traipse ahead on his own two feet.

This week alone, Trump has escalated a feud with the Muslim parents of a U.S. soldier who died serving in Iraq, declined to endorse House Speaker Paul Ryan of Wisconsin and Sen. John McCain of Arizona in their respective primary bids, and even half-jokingly rebuked a mother and her crying baby at a rally. His actions, according to a Republican operative familiar with the campaign, have left some Trump aides privately "apoplectic" that a seemingly winnable contest against Hillary Clinton appears to be slipping irrevocably out of reach.

"The campaign's imploding; it's disintegrating," one Trump campaign staffer says. "Every time we do something positive, we cough up the ball."

But the candidate is similarly frustrated with senior levels of his operation, which some believe is causing him to rely heavily on his own gut instincts, raising the prospects of a high-wire controversy.

Trump was alarmed by a call he received last week from a senior adviser who is not campaign chairman Paul Manafort or Manafort assistant Rick Gates, according to an account provided to U.S. News. The caller lamented the campaign's lack of state-by-state organization and warned the nominee, "You're not going to win."

The candidate, not surprisingly, hit the roof. But the person who followed up with the adviser on the disturbing message wasn't Manafort or Gates, according to the source. It was Jared Kushner, the influential son-in-law who is married to Ivanka Trump and who is held in high regard by her father.

"Are the kids running the campaign? Anecdotally, from everything I've heard and seen, yes – at least in tandem with Paul and Rick," the staffer says.

When Trump landed in Ashburn, Virginia, on Tuesday – a state in which he has yet to open a campaign office – he huddled backstage with Will Estrada, chairman of the Loudoun County Republican Committee, for advice on how to carry the crucial area.

"George, these people here in Virginia know what we need to do to win Virginia," Trump told his advance aide, George Gigicos, according to Estrada's recollection posted on his personal Facebook page.

But Trump also unleashed another line that reverberated with those in the setting, U.S. News has learned: "Don't listen to New York."

The message conveyed was that going forward, Trump wanted local leadership to make the decisions on where to hold events and how to stage them – not the suits at high command in Trump Tower.

The Republican operative familiar with the Trump operation tells U.S. News that Trump has increasingly been back in regular contact with his former campaign manager turned CNN commentator, Corey Lewandowski.

Lewandowski was ousted in June at the behest of Trump's children, who viewed him as lacking the sophisticated judgment needed to assist their wayward father. A major difference between the reigns of Lewandowski and Manafort is that Lewandowski traveled constantly with Trump, earning his trust and bending his ear. Manafort rarely hits the road and has followed a more typical template by holing up in an office with a phone to his ear and his fingers on a keyboard.

The Manafort model has its advantages, but it also has created a distance from Trump that has stalled decisions and left the candidate without a reliable rudder when things go awry.

"He's not satisfied with what he's getting," the Trump staffer says. "So he's basically gone rogue."

Manafort has publicly denied any sort of internal unrest, chalking it up to a Clinton campaign narrative. And a Manafort ally says it's preposterous to lay the blame of the catastrophe of the last week at his friend's feet.

"Manafort's working his ass off. It's not an easy job. Trump's a handful," says the ally, an informal adviser to the campaign.

It is Trump, after all, who obsessively monitors his media coverage and then lashes out at his critics without reservation or calculation. It is Trump who directs which reporters are thrown out of the press pen or banned from venues entirely. It is Trump who picks fights with his own party out of ego and vengeance, rather than keeping himself trained on Clinton. And it is Trump who declines to give the obligatory tip of the hat to a fallen soldier before taking on his parents' political critiques.

"Empathy is not one of his best qualities," laments the informal adviser, who characterized Trump's public spat with Khizr and Ghazala Khan as "not his finest hour, to say the least."

But the idea that there will be an intervention or some come-to-Jesus call – rumors of which circulated on Wednesday – is also scoffed at widely inside the Trump contingent.

"It doesn't work that way. You can give him advice and he can either take it or not take it. That's the way it works," the informal adviser says.

"Trump is Trump," observes John Noonan, a former national security aide to Mitt Romney and Jeb Bush who has sworn off voting for the GOP nominee this year. "You can pull somebody out of the insane asylum and staff him with the best people in the business, and he's still going to be in the parking lot screaming about the book of Revelations and there's nothing you can do about it. Hillary's the placekicker on the field. She's shanking every kick. And Trump's the guy pleasuring himself in the stands."

I love the idea that Hillary is shanking every kick... like having someone up there to criticize Trump like Khan wasn't preeeeetty much a perfect choice for the convention.

So this doesn't have anything to do with clown shoes since he ALREADY went bankrupt and lost it but this is damned hilarious.

I'm envisioning them both wailing and crying.

I'm envisioning them both wailing and crying.

So, a standard speech for Trump?

That is three +1s in a row folks. Bingo.

If this is the “top secret” Iran video that Trump claims to have seen, it would mean that Trump told his audience a half-dozen things about the tape that aren’t accurate. Contrary to what Trump said about the video he claimed to have seen, this video was not shot in Iran, it did not show the exchange of cash, it was not “top secret,” it was not “a military tape,” and it was not “provided by Iran.” Nor was it released to “embarrass the United States,” as Trump repeatedly claimed.

I'm in the minority of folks who are glad this was branched off the other thread so I can popcorn.gif trump shenanigans without having to dumpster dive through literally 12000 posts.

I can see that, but at the same time, where does this breathtakingly thorough evisceration of Trump's tough guy illusion belong?

I can see that, but at the same time, where does this breathtakingly thorough evisceration of Trump's tough guy illusion belong?

Holy crap! It starts and ends with a challenge to fight, but the meat in the middle of that word sandwich is something legendary akin to the best that Katz's Deli has to offer. That's one hell of a proven point.

Yep.. Obama is a time traveler.

Yep.. Obama is a time traveler.

Katrina Pierson is a real treat. 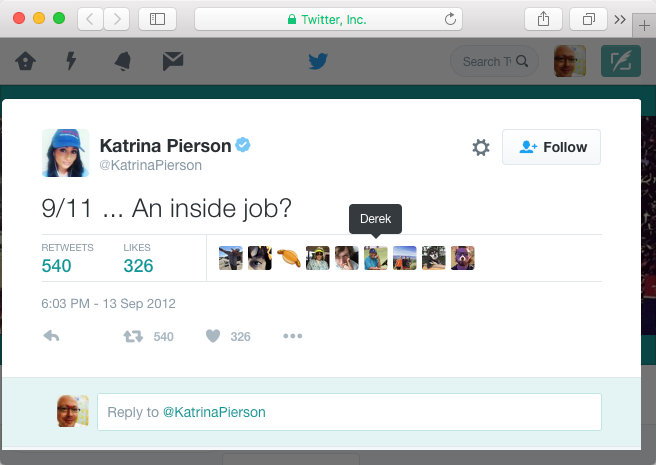 While Trump and her husband, Republican presidential nominee Donald Trump, have said she came to the United States legally, her own statements suggest she first came to the country on a short-term visa that would not have authorized her to work as a model. Trump has also said she came to New York in 1996, but the nude photo shoot places her in the United States in 1995, as does a biography published in February by Slovenian journalists.

While Trump and her husband, Republican presidential nominee Donald Trump, have said she came to the United States legally, her own statements suggest she first came to the country on a short-term visa that would not have authorized her to work as a model. Trump has also said she came to New York in 1996, but the nude photo shoot places her in the United States in 1995, as does a biography published in February by Slovenian journalists.

Ask about her "college degree" as well. 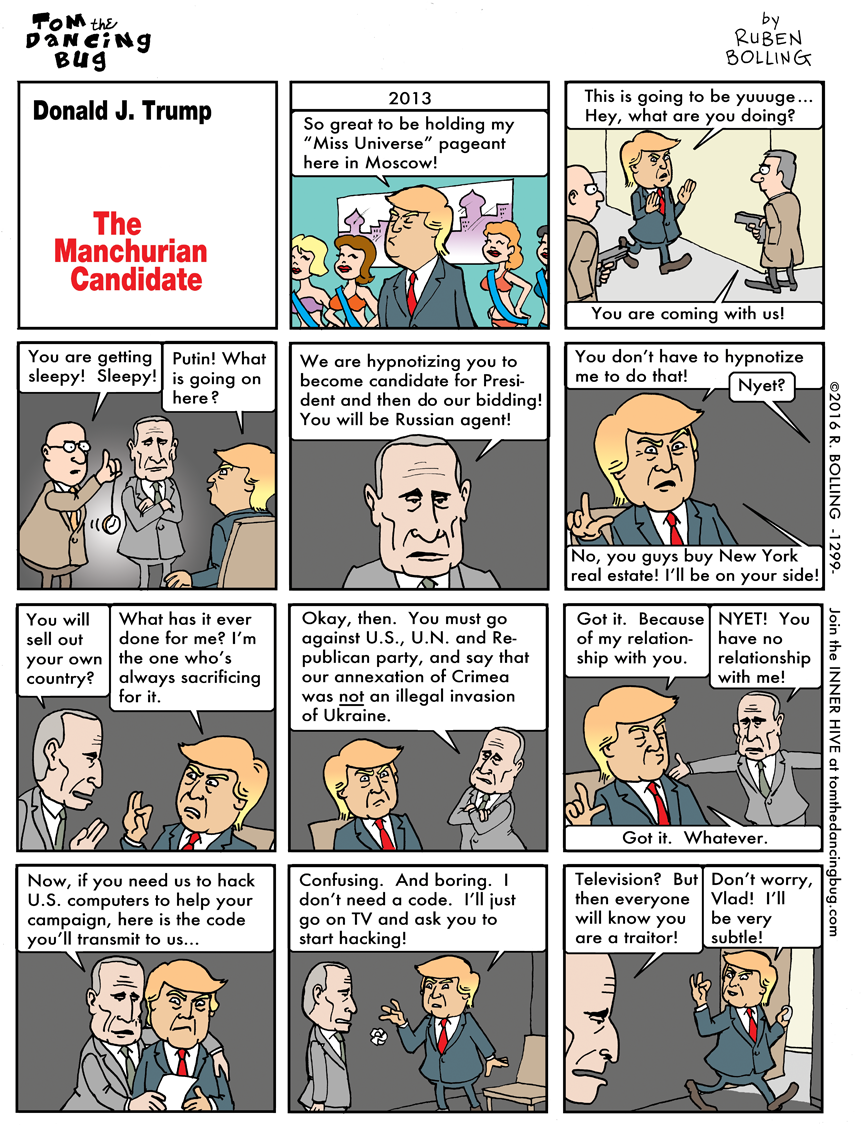 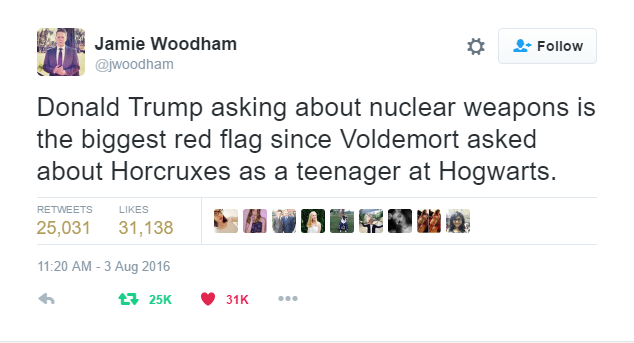 People at a Trump rally hold up copies of the constitution. They are booed, and escorted from the room. This is definitely a new GOP. 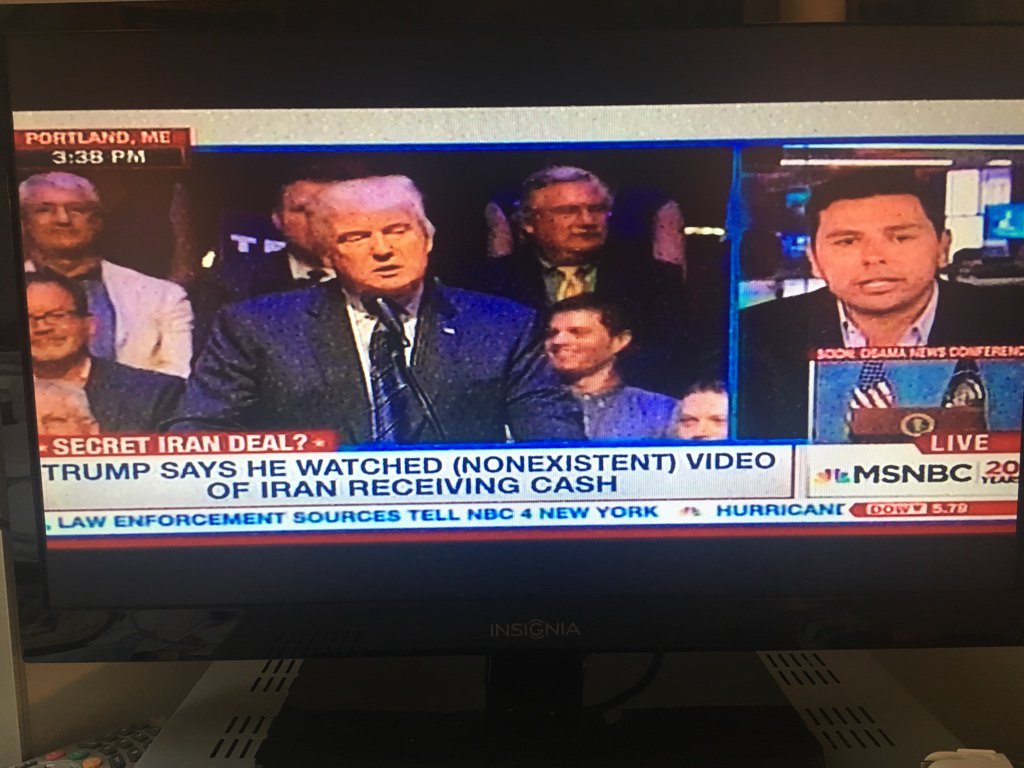 The Harvard Republican Club announced it would not support Republican presidential nominee Donald J. Trump, and called for Republican leaders to withdraw their support of the candidate they called a “threat to the survival of the Republic” in a press release Thursday.
-
In the scathing statement, the largest conservative group at Harvard cited “both policy and temperamental concerns” about Trump and condemned his divisive campaign rhetoric they say “is poisoning our country and our children.”
-
The Republican Club polled its members earlier this week and found that 10 percent of Harvard Republicans intend to support Trump for president, while an “overwhelming majority”—80 percent of polled club members—indicated they would not support the party nominee and 10 percent remained undecided.
-
“His authoritarian tendencies and flirtations with fascism are unparalleled in the history of our democracy,” the Republican Club said in a statement. “He hopes to divide us by race, by class, and by religion, instilling enough fear and anxiety to propel himself to the White House.”

That clip pretty much says everything one needs to know about The Donald, in a nutshell.

Love that expression on her face at the end.

All is made clear.

Donald Trump lives, works, eats and employs people of all races and religions.

(Link is to archive.org just in case the original gets ... amended.)

Good luck getting your point across, Harvard so-called Republicans. We know all you elite college types are all Godless commie fascists brainwashed by liberal education!

All is made clear.

Donald Trump lives, works, eats and employs people of all races and religions.

(Link is to archive.org just in case the original gets ... amended.)

The sentence is a mess.