Forced myself to paint something different today and really got into it. I ended up completely finishing my Lord of Contagion. Feeling a lot more comfortable with my wet blending (on the fire). Really noticing how adding contrasting colours makes a model "pop"!

Anyway, went from feeling glum about painting to feeling great! Funny how quickly your mood can change with these things

Both excellent jobs, the Nurgle chap in particular looks tops, the flames do pop and nice cloak colours. 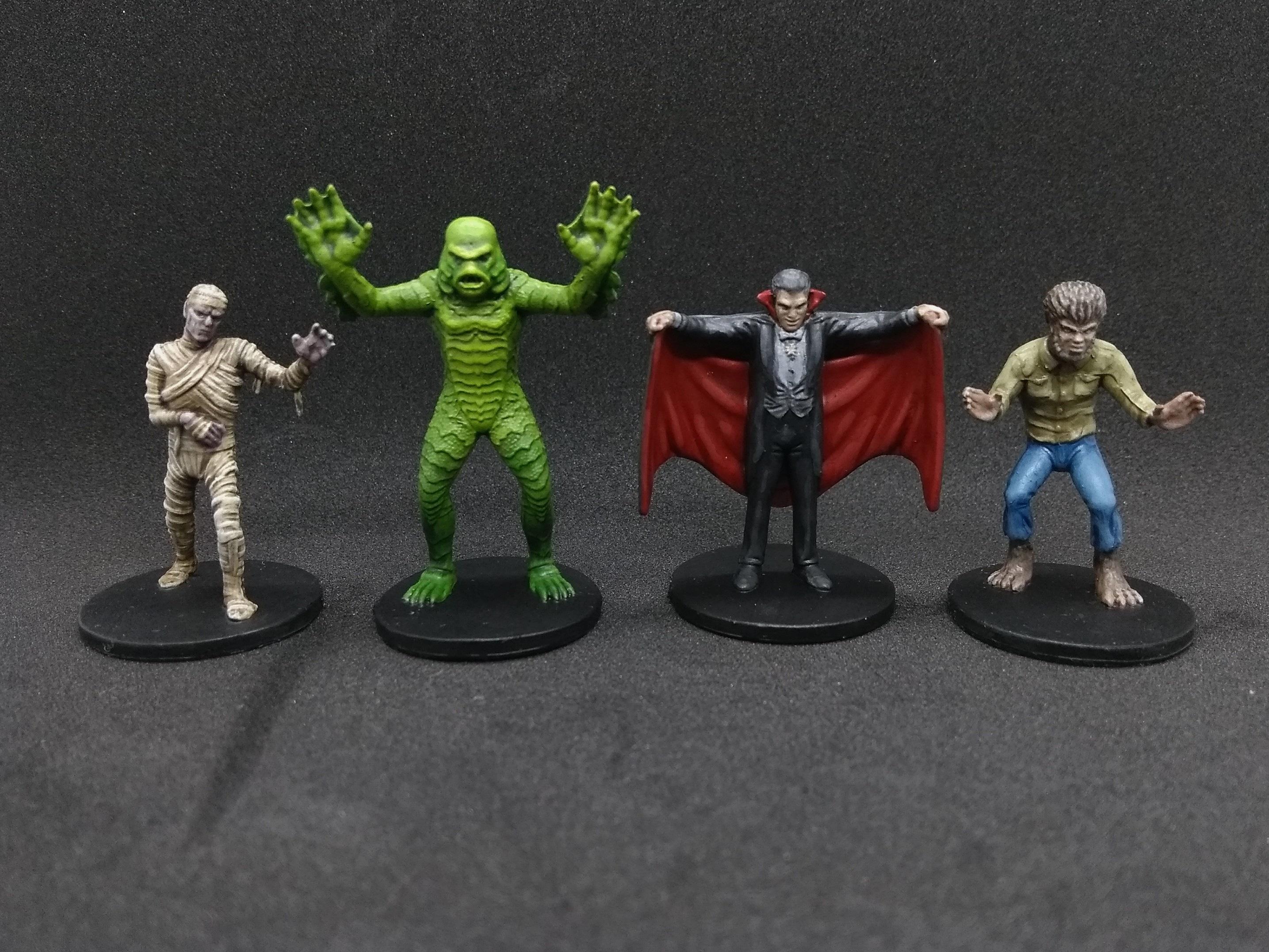 Not got much painting in myself last few weeks, last thing done... Half of the Horrified board game pieces.

The quality of the plastic was fairly horrifying

but still fun to paint.

Those look great, really tidy job and the colours are really vibrant! I like 'em a lot

Wonderful work, both of you!

My wife has indicated that she might want the option of buying a set of paints and brushes for me for Christmas. I'll give her the chance. If she decides otherwise, I think I'll grab a set myself and try my hand at a few models. Expect horrifying results.

Practice helps, and watching the occasional video from someone who knows what they're doing can be really interesting and educational. But don't get trapped down the rabbit hole - there's only so much you can improve by watching, and at some point, you've got to just do.

I expect that's probably a lot like medical school.

This thread fills me with good feels.

Practice helps, and watching the occasional video from someone who knows what they're doing can be really interesting and educational. But don't get trapped down the rabbit hole - there's only so much you can improve by watching, and at some point, you've got to just do.

I expect that's probably a lot like medical school. :)

My General Veers for SW Legion looks undead. Then I learned about flesh washes. 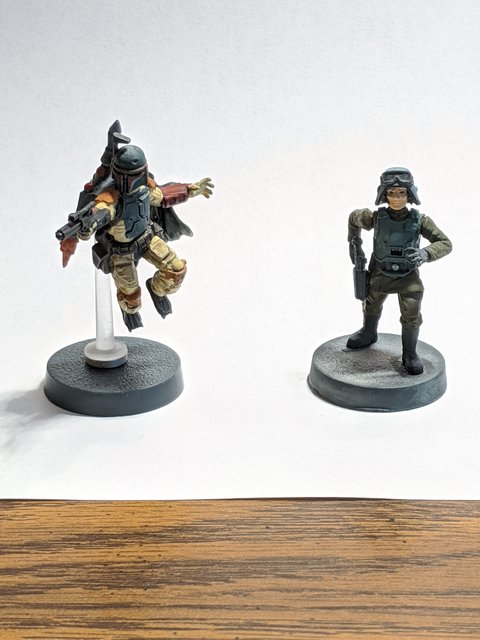 Ha! That's exactly what I would do when I was a young lad painting those little pewter figurines. I'd do my best, and then take a look at the photo of it done properly in White Dwarf. Then I'd cry a bit and give up. I remember trying ink washes at one point, which was fun. I lusted after an airbrush, but we were far too poor to afford something like that. Perhaps I'll treat myself now if the bug bites again!

Airbrush painting is fun, I enjoyed learning how to do that. At first I thought it was just for big models and for bulk base coats but then I started using it on as much of a model as I could using putty masks to protect different layers. Really loved the process.

I think 'SchnauzerFace' stopped doing videos but he has some great ones that are still available.

There are some techniques he uses that I never got into, like oil based washes and shaved pastels but they create great results.

Some more Deathguard progress, this time for Killteam 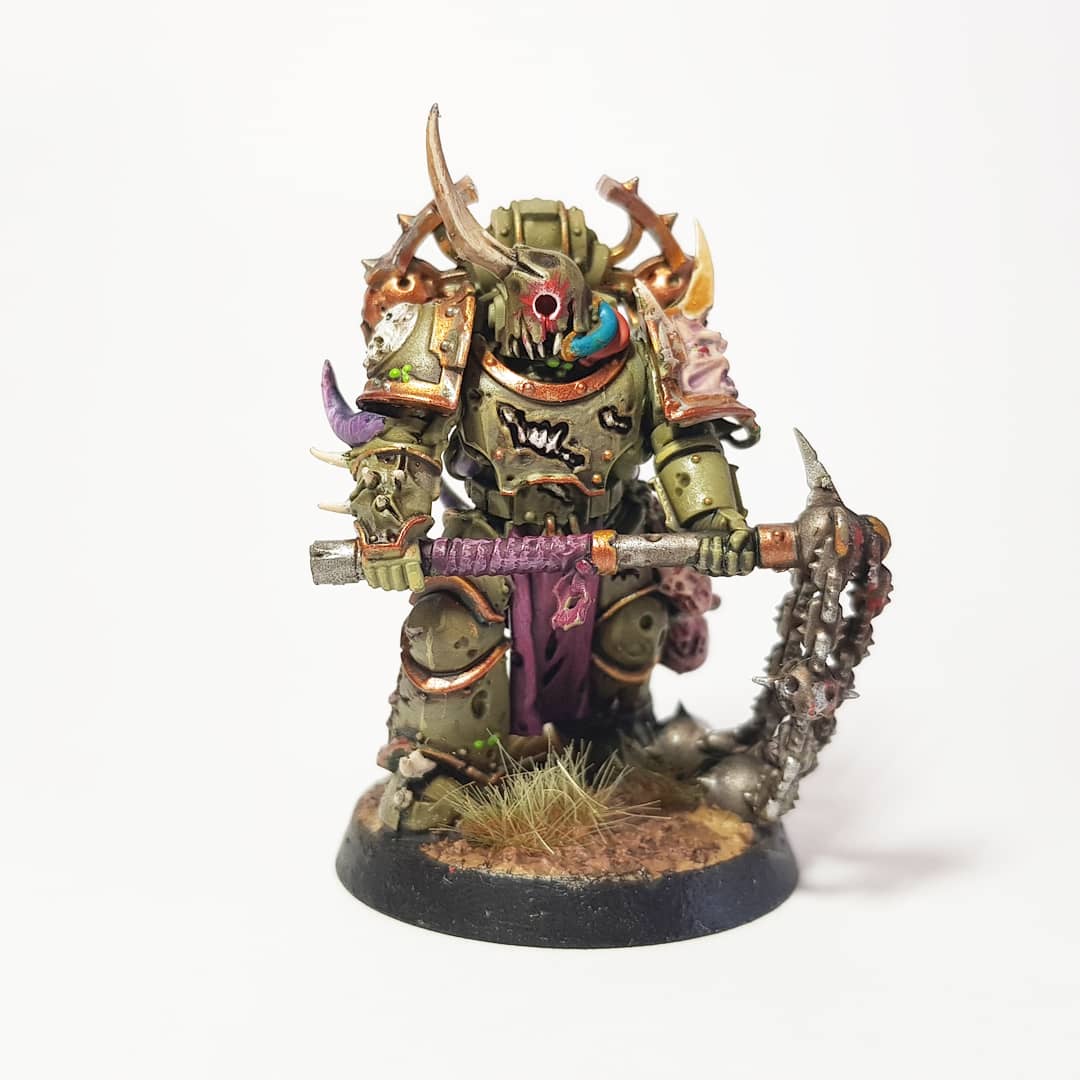 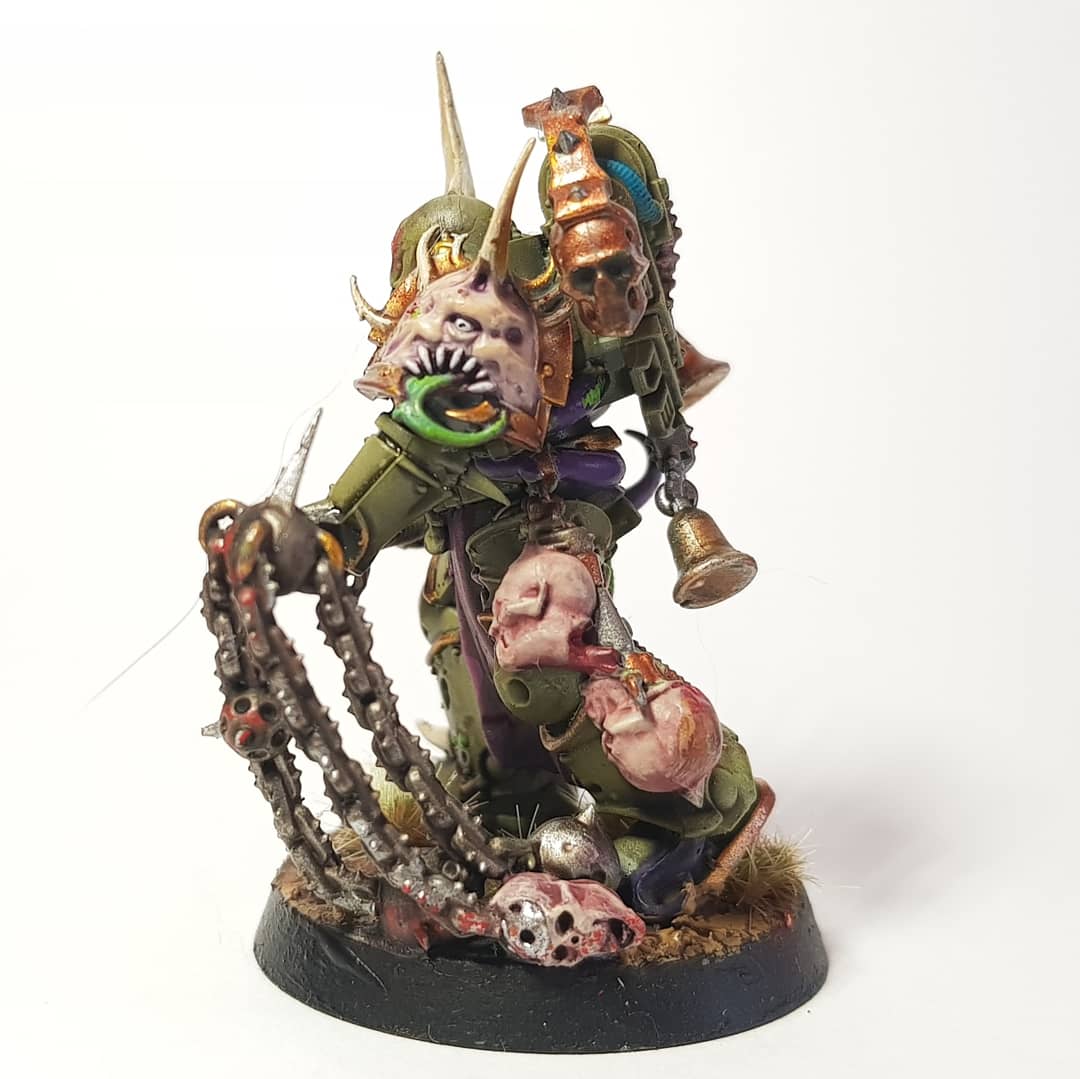 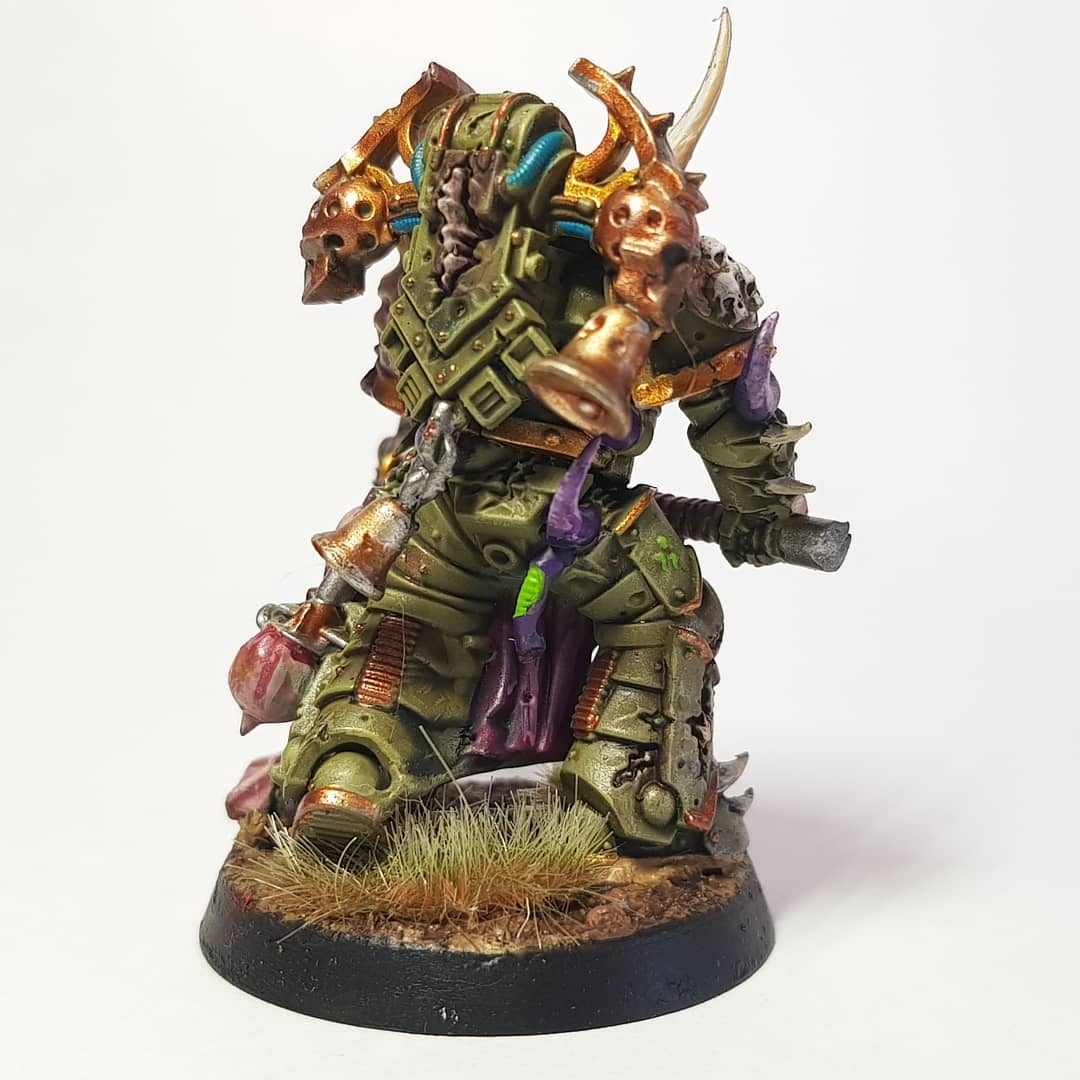 Just noticed I need to tidy up the cloth on the axe when posting these, but otherwise I'm really happy with my steady improvement. There's a real art to painting gross things, and I learn a bit more with every new mini

First Kitbash! I don't like the offical GW Big Mek kits, but did fancy the ogryn servitors! So a bit of clipping, a bit of green stuff, and a bit of Nob parts, Bam! Big Mek 1 done, Big Mek 2 in the wings. Went for a dull NMM look, had alot of fun adding rusty bits, though I could have added more! What do you guys think? 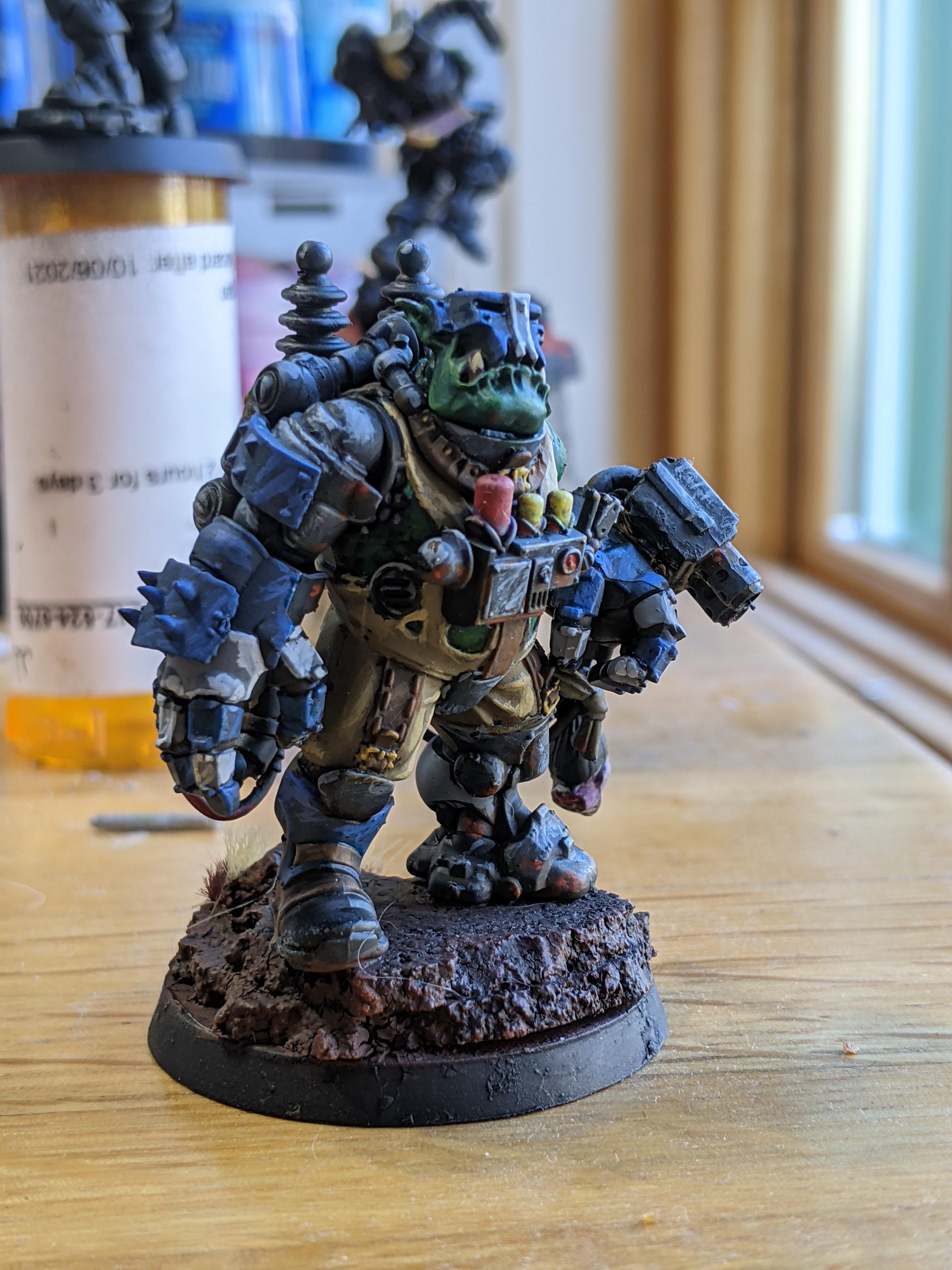 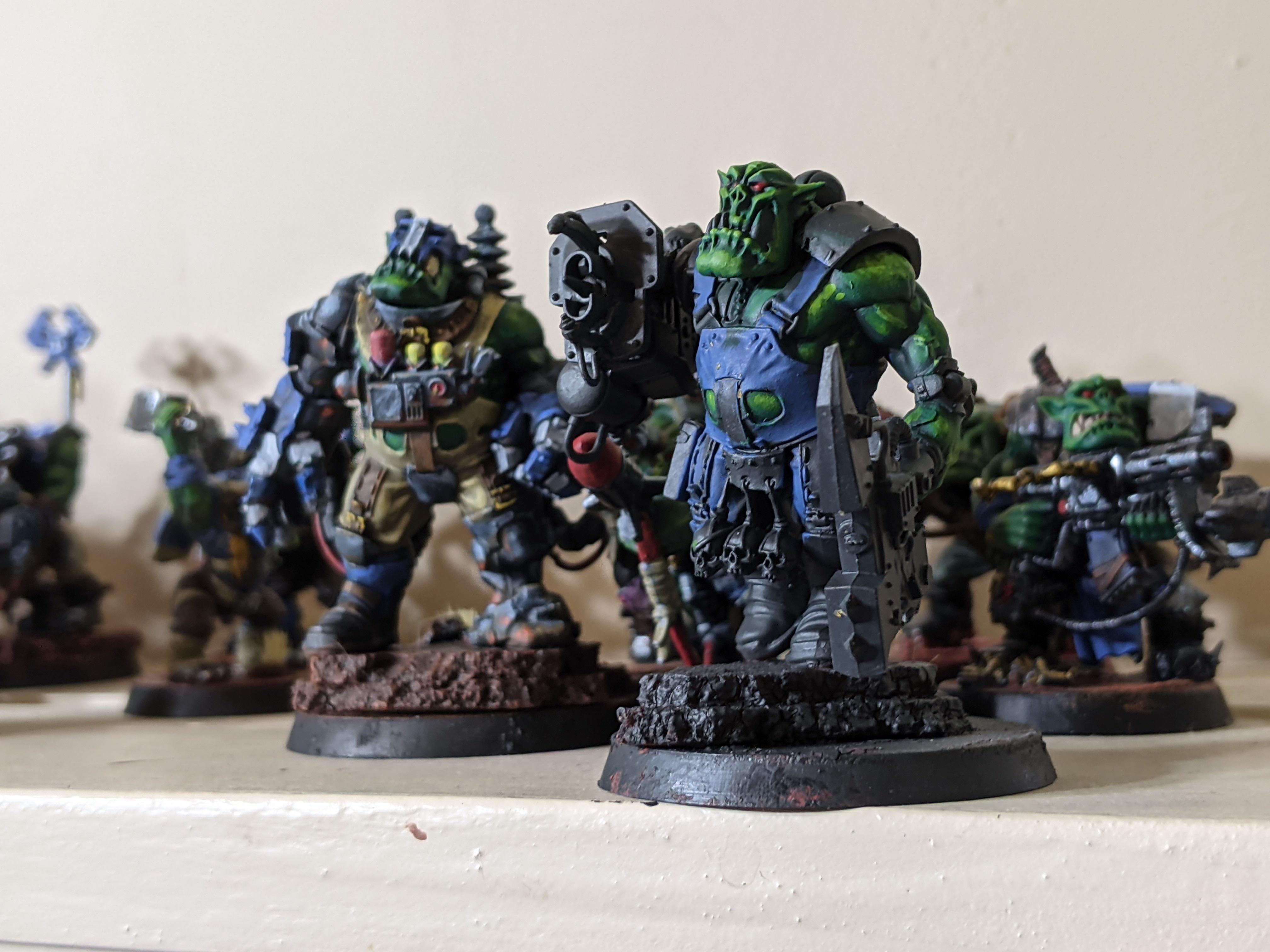 My finished Dewback for SW Legion. This was the first time I tried blending colors on the mini. I think it turned out okay. The Stormtroopers are intentionally dirty. I magnetized the arms so that I could switch weapons. 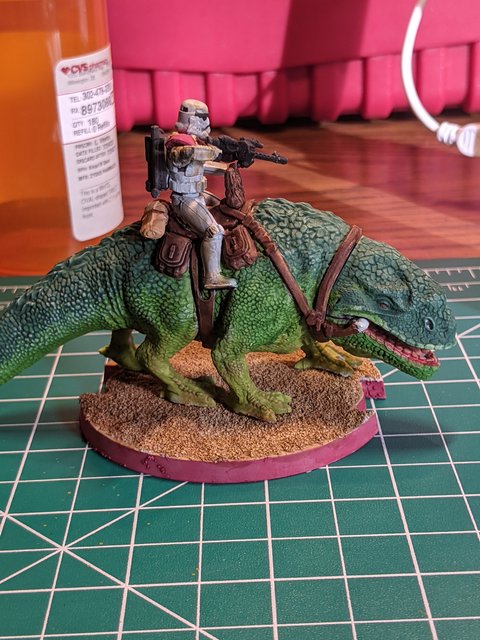 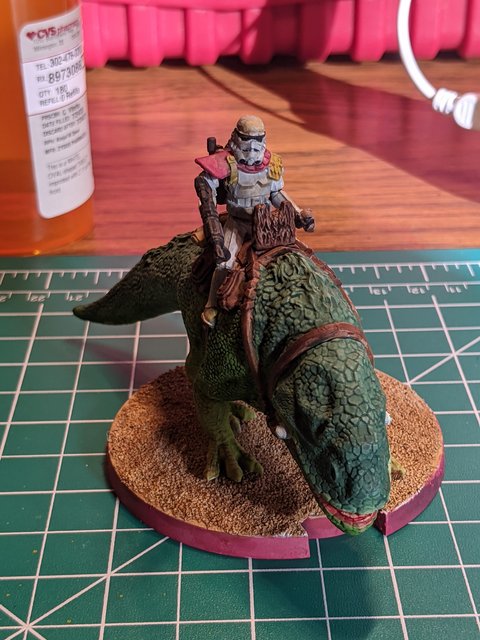 The skin on that dewback is great!

The skin on that big lizard is so well done, and agreed with Videohead, perfect colour choice for the base lining!

Actually that is supposed to be red, but it didn't turn out quite right. So thanks, I guess (seriously, thank you, but it was a mistake)? I color code each of my units around the base and then put a like-color painted poker chip on the unit card to tell them apart. I think it is easier than using the number tokens that they give you. That's why the arm pad is also painted red. 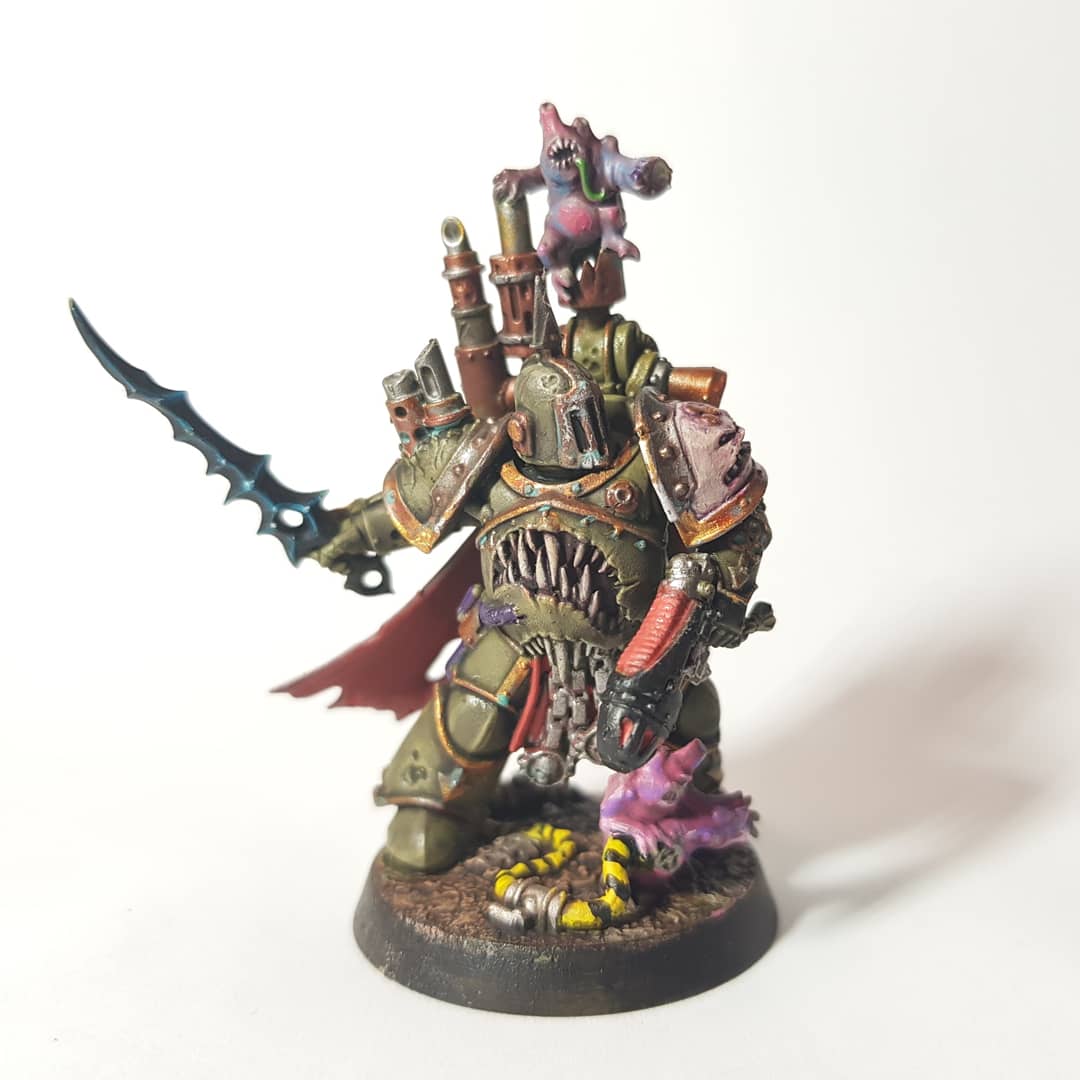 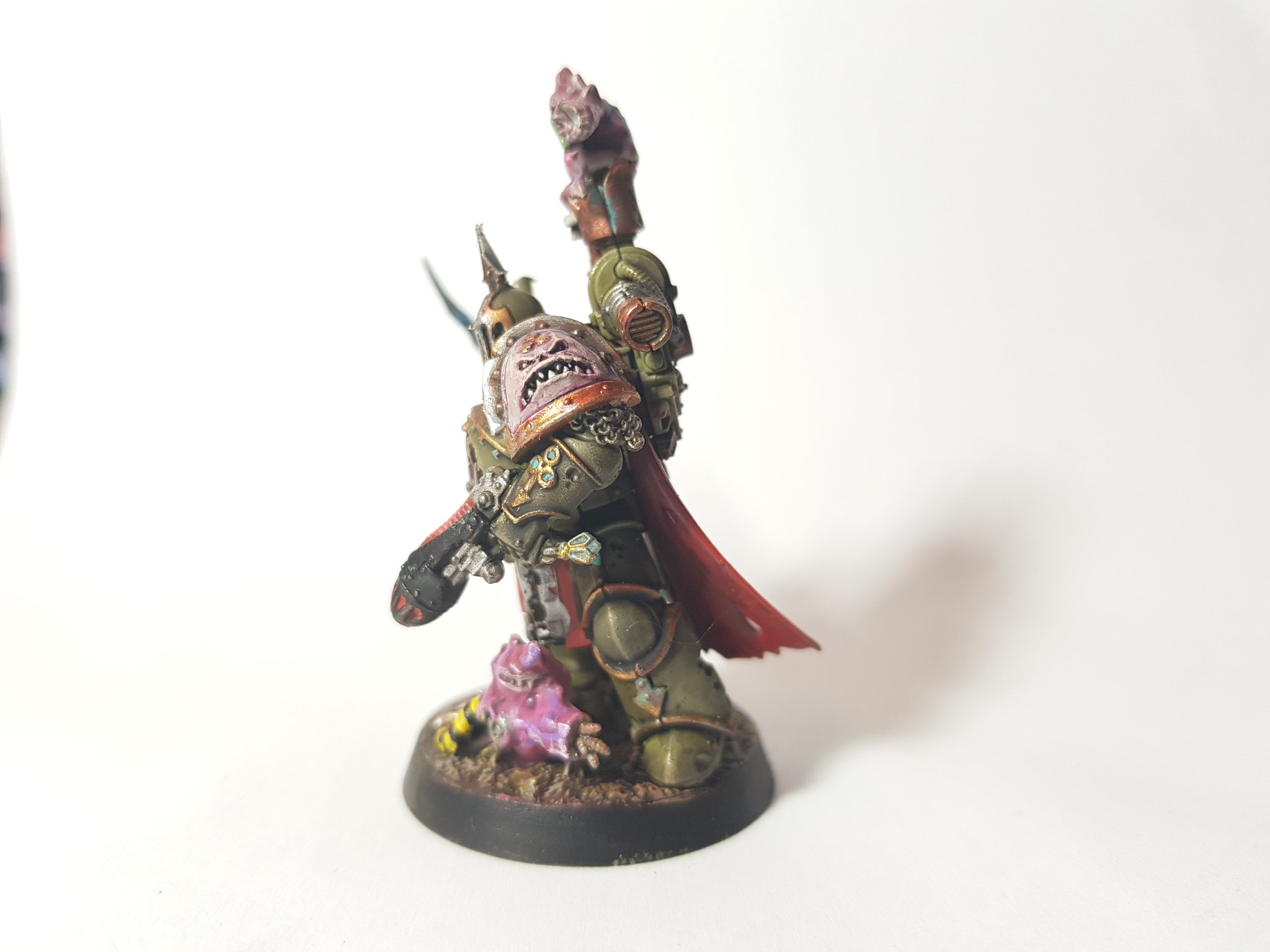 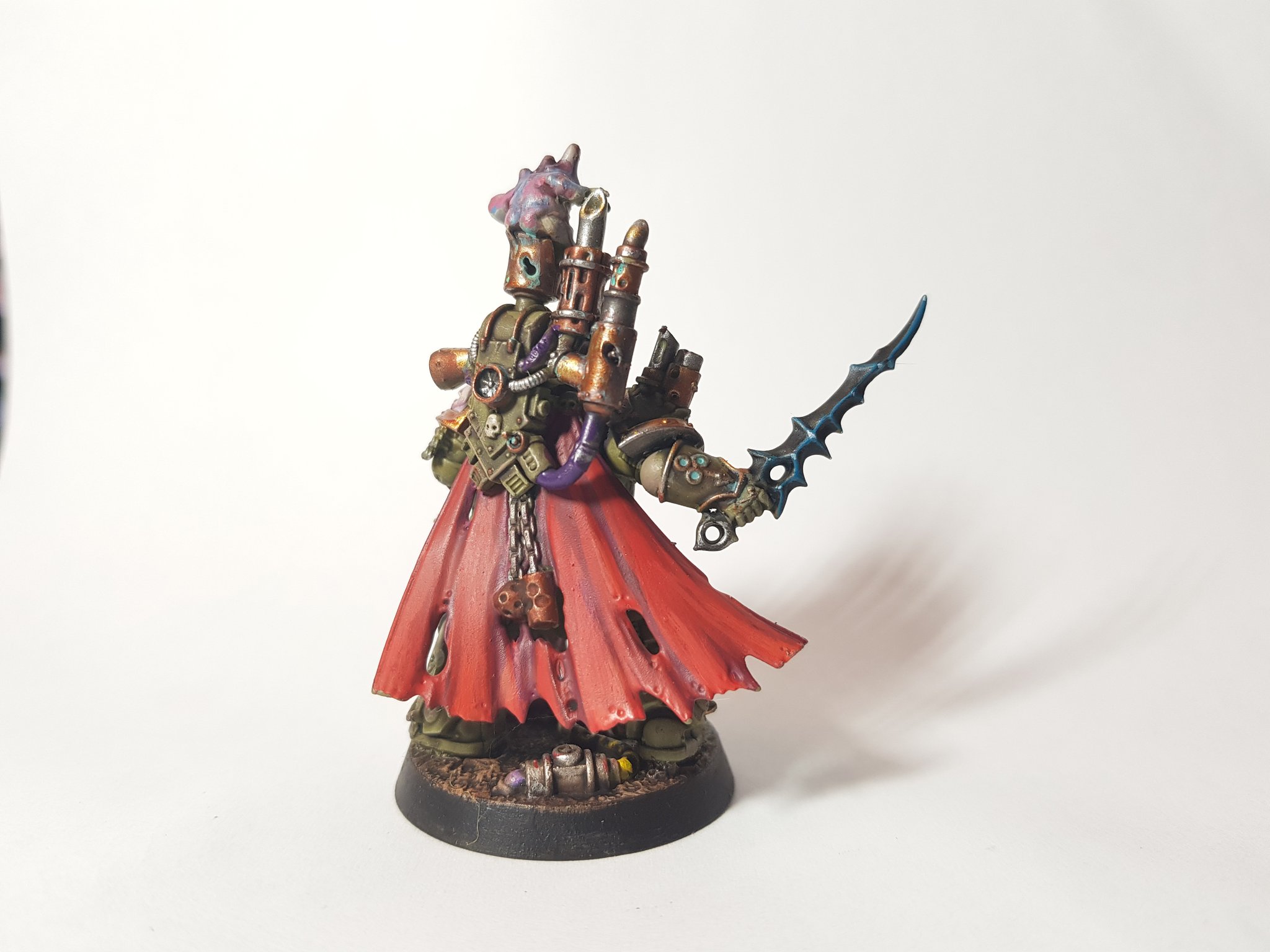 Been busy today. First, I finished my entire Killteam! You might recognize some from previous posts. 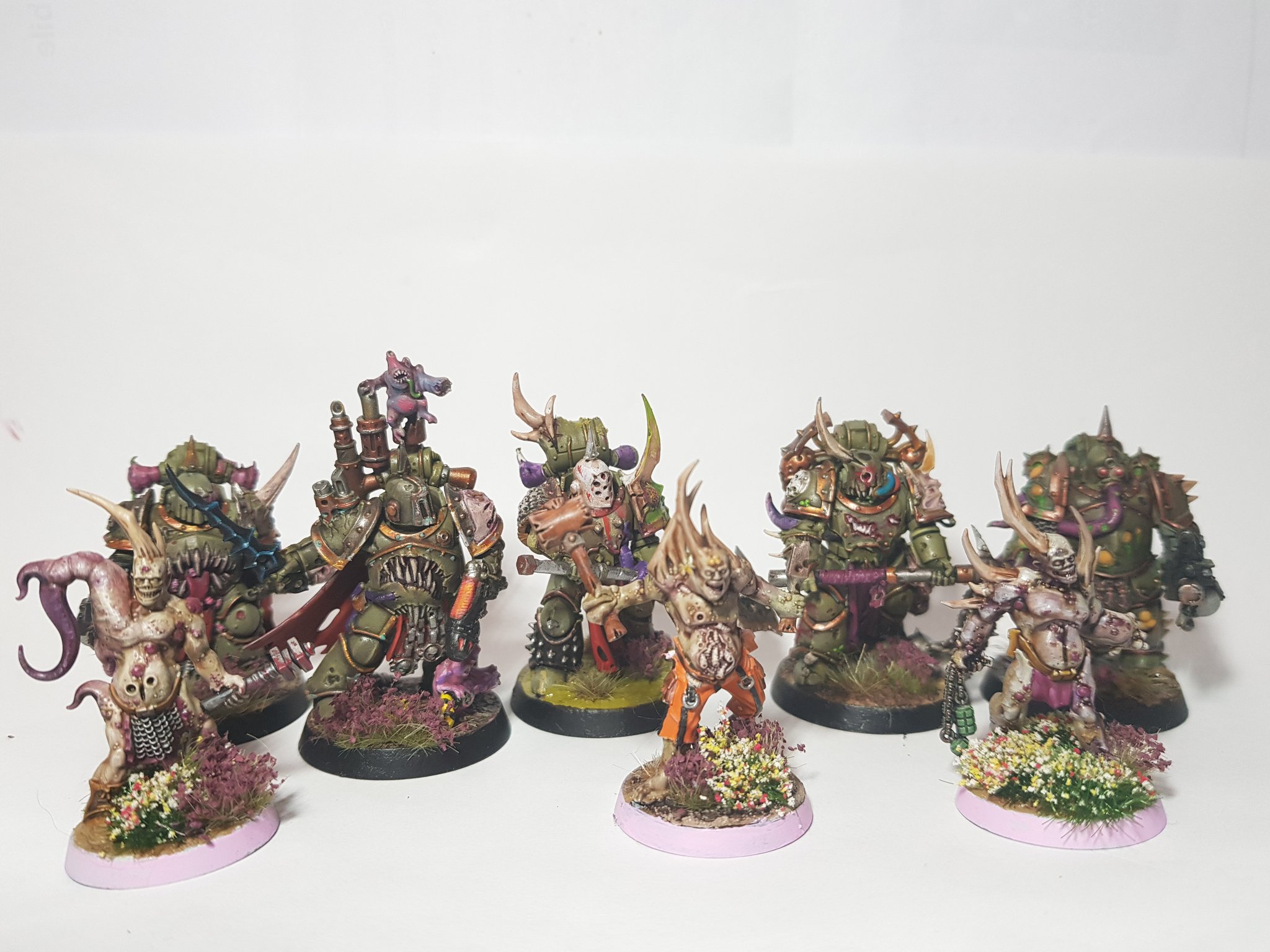 And then I worked on my Myrmourn Banshees. I was afraid of painting Nighthaunt, but they turned out alright!

Both sets of those look great together! And, to my untrained eye at least, really consistent paint job across the sets. The Killteam definitely looks like a team.

Was able to play my first tabletop game with them today. Had an absolute blast, and dominated the table with my DeathGuard! 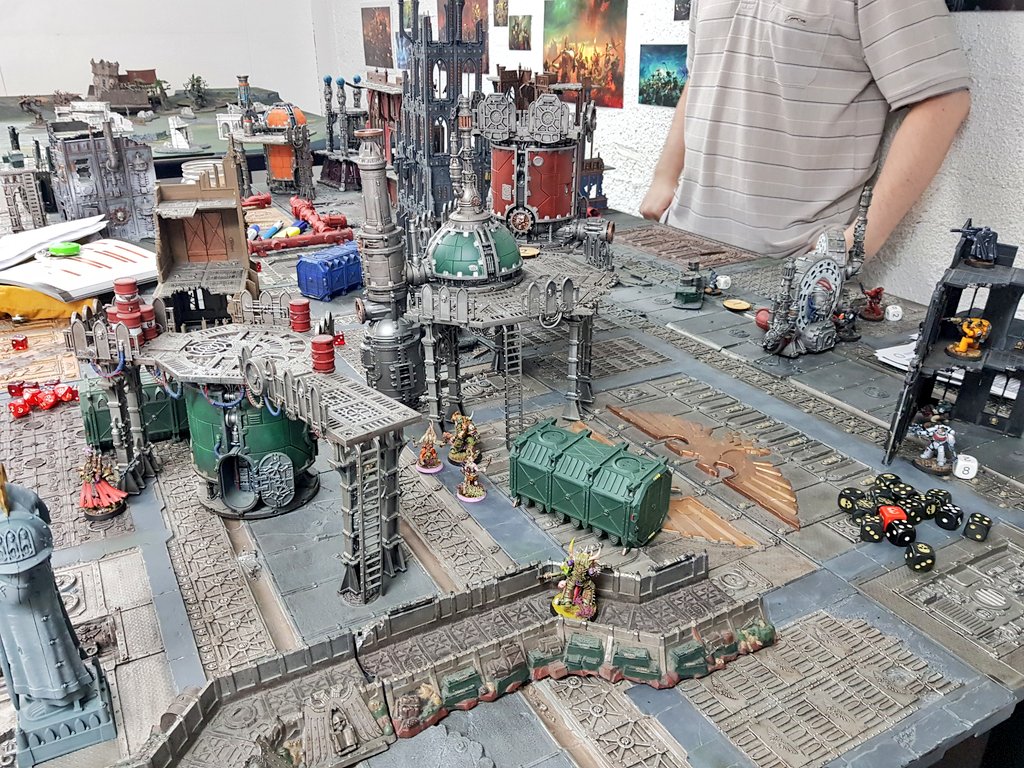 Some good looking terrain too.

Perhaps two decades ago I bought a starter Empire paint kit with my lunch money. I gave up shortly thereafter.

Any good starter resources on how to properly paint?

He's not everyone's cup of tea, but I like Goobertown's Fundamentals video, and I've recommended it to others before. I find his videos hit and miss, but when he's good, he's very entertaining and informative. This is one of his good ones.

Goober is great, I really like his chill approach to painting.

For someone a little bit more out there, I'd recommend Miniac. Squidmar is another great YouTuber with fantastic tutorials.

Duncan Rhodes was an old Warhammer tutorial ambassador who has since branched off to do his own thing. Well worth checking out too.

There's honestly so much out there, watch enough and you'll get a good idea of the general approaches to painting! 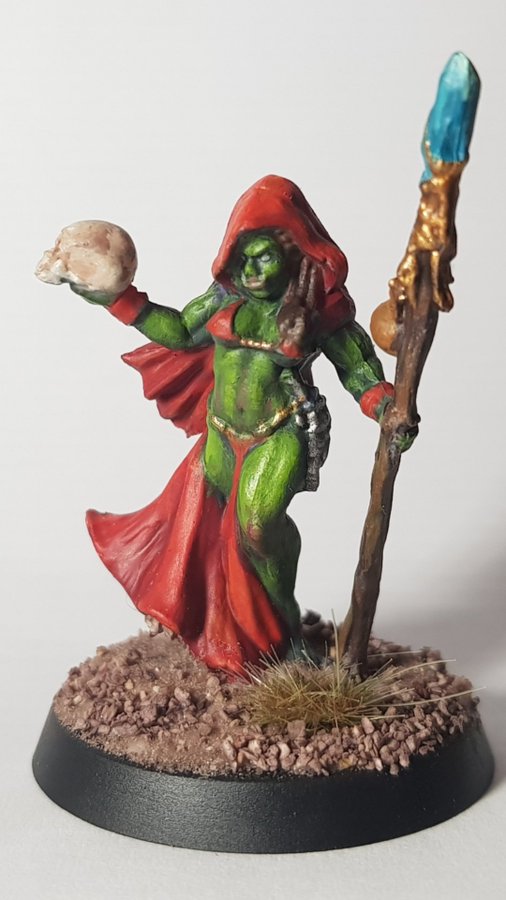 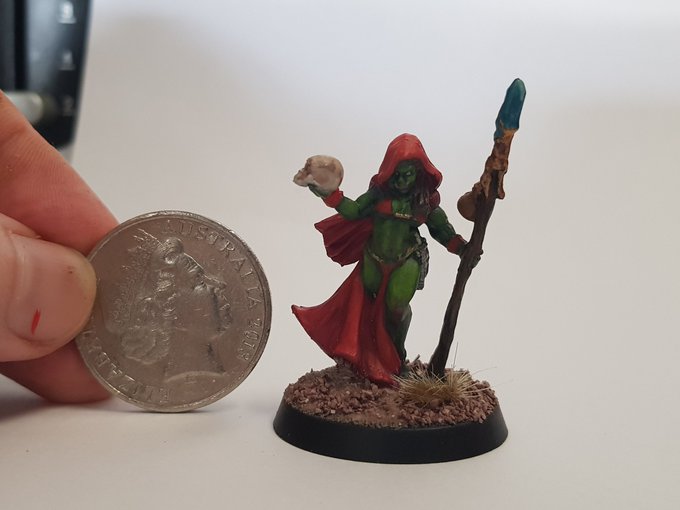 Here's my first mini painted without washes. I realised they were becoming a bit of a crutch, so I wanted to push out of my comfort zone a little. Pretty happy with how the green skin turned out! (it's not something I've done before).

I adore this thread.

My closest friend passed away and I inherited all of his "nerdy sh*t" (said affectionately by his daughter). He and I played Warmachine/Hordes together but I have absolutely no interest in continuing the game in any other context.

Where I'm going with this is, I have a modestly hefty collection that I would happily give free to an interested goodjer, as I just don't want to deal with trying to sell all of it off. Would vastly prefer to just give it away as a lot (or sell if someone insists on paying something). I'm not going to bother inventorying it all, so at a high level:

Trollbloods - Mountain King mostly painted, a variety of units/solos/attachments/warlocks (including a magnetized dire troll (bomber/mauler and I think blitzer) -- mixture of assembled, new in box/blister, and partially assembled.
Protectorate of Menoth - Judicator new in box (one of my most recent acquisitions around a year ago) and a lot of units/solos/attachments and a few warcasters. Also a mixture of assembled, new in box/blister, and partially assembled.
Retribution of Scyrah - pretty full collection on this one I think - the faction my friend collected & played the most. Mostly assembled, some still not. I'm not really digging far into this one. I think he has the original Ret colossal assembled (I don't know its name).
Circle of Oroboros - not quite as full a collection, this was the second one he started to collect & play. I'm keeping the giant bird model as a memento (he really loved birds).
Cryx - I don't know how much Cryx he picked up. It was his initial Warmachine faction before latching onto Ret.

I'll be keeping only a few of our favorite models to paint & display as memorabilia. There's otherwise a pretty big collection especially for someone who's new to the game and looking to get started. Yes, I'm including our sourcebooks (and I even have the Oblivion campaign new in box though I did open the box to look through the manual a bit when I bought it), storage cases, dice, bits and bobs for measurement/placement (including a really handy laser for line-of-sight), a set of Hidden Forest rubberized terrain & scenario set mats, a 4'x4' roll-up two-sided battlemat, and whatever other miscellaneous I can't recall at the moment.

This is a lot to box up and ship, so it would be a while before I can get it in the mail and I would ask for help in paying shipping at least, or I wouldn't mind making a road trip if the destination is within a few hours of me (I live in Cedar Rapids, Iowa).

Hoping someone here wants all this, otherwise I'm going to have to hope I can find someone through one of the game shops in my area.