Those are pretty much the universal responses people have to Fast Five, yeah.

I love your reviews, RedHerring.

I feel like I'm just a debbie downer lately because a buddy of mine shared that earlier and... it feels a bit phoned in?

Which sounds silly to say considering all the cash that clearly went into it, but I'm having trouble finding the heart to it. I think without the Rock you lose some serious heart, which actually makes the absence of Brian/Paul Walker felt all the more.

Leading me to wonder...

I dunno. I still haven't seen Hobbes & Shaw, so maybe 8 was my limit. Curious to see how the rest of you will react.

Justin Lin is back directing, so this means my ass is back in the movie theater, day one. (Or as close to as possible, anyway.)

FF9 looks more like a GI Joe movie. I have my doubts, but it looks fun.

Wow. I swear I said "brother" 1 second before I heard it.
We've been thinking the wrong way about the sequels. It's not where they're going to (space, the final frontier!), but who they're going with (let's bring family up to eleven).

I haven’t seen two people look less like brothers in a movie since “Twins”.

What?!
They totally look the same. Starting with the hair style. 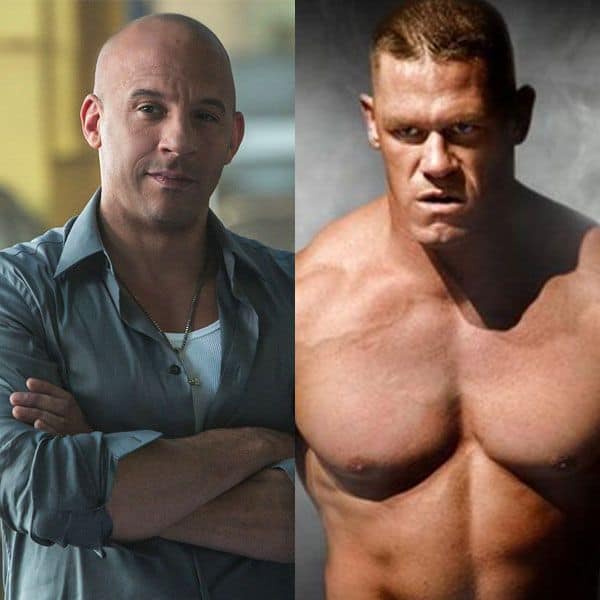 Ah, what to do with all that money from Rio?

Brian and Mia, along with Dom and Elena are retired from stealing things - they’re living a peaceful life in Spain - relaxing, having babies, and occasionally driving stupidly just because they can. Dom can finally have all the DVD players he wants.

Meanwhile, in Russia and across Europe, Hobbs is chasing an actual evil criminal gang of street racing idiots who have been hijacking trucks and stealing things. How can he possibly stop them? Call the FBI? DSS? MI6? Interpol?

No! There’s only one team who can stop this madness. Hopefully they’ll only destroy one or two countries in the process.

Oh, and Letty is still alive. Um, I guess all those people at the funeral with the coffin and everything are feeling a little confused right now. And she’s on the bad guy team because she’s lost her memory.

So Dom and crew (minus the Spanish-speaking guys) head to London to start blowing things up. Several explosions later the bad guy team is tracked to Spain.
Dom: “that’s a different country! Let’s go!” (This is actual dialogue from the film that I didn’t even need to make up!)

Things I learned from this movie:
Spain has the longest runway in the world. I mean it’s really long.

And.. apart from the action set pieces most of this was fairly forgettable. But the highway tank thing was great and the endless runway giant exploding plane thing was fantastic.

The best one so far: still Fast Five.

You did stick around for the end credits, right?
I really enjoy 6. It's probably in my top 3.

I still haven't seen Hobbs and Shaw, tough with a baby to get to theater. Maybe I'll rent it this weekend on demand or something.

Need to see it and then update rankings.

You did stick around for the end credits, right?
I really enjoy 6. It's probably in my top 3.

I did. Well I saw a teaser for 7 somewhere at the end, I’ve got a feeling it was before the credits.

Oh wow, where did the last few weeks go? I’m struggling to capture the essence of Furious 7 - it’s so many things all at once (again) but also sort of hollowed out by Paul Walker’s death. I’ll have to re-watch this one too I think.

Gotta get that billion I guess

Of course. That makes complete sense for this franchise.

In related and equally important news, after a short break I’m almost ready to return to my review series

I wish they had just released it. I'd pay $20 for digital just like I did for Bill and Ted.

This is how Dominic Toretto becomes Riddick.

This is how Dominic Toretto becomes Riddick.

Yusssss I had the same thought. F&F is a prequel to the Riddick series!

What? I was busy. The dog ate my review. I was delayed. We were on a BREAK.

Alright here we go again. Brian's being a dad! Dom and Letty are at Race wars! but it's not going to last. Letty still has amnesia so she's going to leave again. Oh and there's a new bad guy and town, and his name is Shaw. Like the last Shaw, but with a different first name, because they're related. It's one of those "you killed my brother, prepare to die" things except the brother isn't dead.

So Shaw is going to kill everyone! starting with Han because Han is the best, so you have to take him out first. Smart. Then there's a fight which takes Hobbs out of action and a bomb which interrupts Dom and Brian and Mia in their domestic bliss - not a great start for the team. Also Dom thinks you can take out bad guys with head-on car crashes now. Um no you can't. Shaw starts to follow the team everywhere.

Enter Mr Nobody - the secret government spy guy who is going to help Dom and team get rid of their Shaw problem. Furious Team assemble! also Letty comes back even though she just left like 2 minutes ago.

*Interlude in which several implausible and highly entertaining things happen*
Brian: Cars can't fly
Everyone else: Yes they can. And will. A lot.

Shaw: Now I have the eye thing so I can track YOU down and follow you everywhere you go.
Dom: You could already do that. Not fair.

So we return again to the mean streets of LA so the team can take down Shaw and his friends on their own terms. But now the bad guys have a helicopter and a military drone thing, so this is going to get interesting.

Will Hobbs shrug off his injuries to kick some butt? (yes)
Can the team take down Shaw? (yes)
Can Letty regain her memory in time to save Dom with the power of love (yes)
Will Shaw be imprisoned in an ultra maximum security secret underground bunker/lair prison facility, heavily guarded with no possibility of escape? (absolutely)
Does anyone expect him to stay there more than five seconds? (nope)

And at the end we bid farewell to Brian and/or Paul - they are getting them a bit mixed up here. I guess that's OK just this once given the circumstances. It's a nice send off.

Right then .. lots of noise, terrible driving, and completely illogical activities. So I'm in the right movie series. Plenty of individual fun moments but I'm not sure this one adds up to much really.

Time to bring back individual scores!
Han: Dies. Again. 0/10
Dom: Crashes cars and says things that are meant to be cool but kind of aren't. 6/10
Brian: Fights dudes, parents child, rides into sunset. 8/10
Letty: Drives, regains memories, saves Dom with the power of love. 7/10
Tej: Appears. 3/10
Roman: Also appears. makes some jokes and a dumb suggestion. 4/10
Ramsey the world's best hacker: Hacks. 6/10
Mia and Elena: basically left on the benches, can't score them if they don't get to do anything.
Hobbs: checks himself out of hospital to drive an ambulance off an over bridge to destroy a drone then rips off it's machine gun to shoot at a helicopter. 9/10

Things I learned from this movie:
Cars CAN fly.

Best one so far: still Fast Five, it's looking like nothing can top this one...

Lol. You really yada yada’ed the whole scene where cars where dropped out of a plane as the best tactical option.

Dom: Crashes cars and says things that are meant to be cool but kind of aren't. 6/10
...
Hobbs: checks himself out of hospital to drive an ambulance off an over bridge to destroy a drone then rips off it's machine gun to shoot at a helicopter. 9/10

Your ratings here are 100% accurate. And also this is why we got Hobbs and Shaw spin-off movie. Vin's man baby ego couldn't handle being second fiddle to the Rock.

Lol. You really yada yada’ed the whole scene where cars where dropped out of a plane as the best tactical option.

Ok let me go into slightly more detail on that.

Roman: I have a really stupid and dangerous idea-
Everyone: let’s do it!

Will Hobbs shrug off his injuries to kick some butt? (yes)

Didn't the guy flex his bicep to break the cast? What a legend.

Will Hobbs shrug off his injuries to kick some butt? (yes)

Didn't the guy flex his bicep to break the cast? What a legend.

Yes. Also didn't he have a broken arm at that moment? lol

Casts are just a suggestion, right?

Haven’t watched all of F8 yet - but Hobbs takes an early lead with the soccer team haka. I did not know that The Rock spent some time in NZ as a kid. The legend continues.