I have a seat arranged to see F9 tomorrow night at my local cinema pub, a pretty emotional thing. For a bit more than a year I wondered if, one way or another, I'd never see the place again. It's been my theater of choice for forever, I saw Shawn of the Dead there, 5 of the 7 times I watched Fury Road on the big screen were there, in Straight Outta Compton just as Dr. Dre shouted for everyone to shut up because he had Tupac in the booth, someone dropped and broke a plate, and I was one of 300 people who gasped when the Breaking Bad episode "To'hajililee" cut to black. If the right guy was at the ticket counter, he always just waved me through, taking it on faith that I'd bought online (I always had). My friends and I, fully vaccinated, have been watching like hawks for signs it would reopen, and I, in particular, pinned my hopes on it happening in time to see F9 with a Corona in hand, and it's coming true. #JusticeIsComing in more than one sense. Kung Fu Night returns next Wednesday.

My parents are visiting this weekend so we actually have a babysitter for once. Considering braving the theater. I dunno

More to come, but as I staggered out of the cinema pub I was saying "Was that Rank 2? I may need to come down, because I think that may be Rank 2."

I’m glad I survived enough of the pandemic to see them hit the NOS button in space.

I pretty much hated most of this movie. That last bit with the magnets was so dumb that I liked it. The rest of the movie was just bad dumb instead of good dumb. It felt like they were going out of their way to make a bad movie. The main bad guy had no teeth. I'm not even sure who the main guy was or what they wanted. The flashbacks to babies were painful. No one cares about baby Don and baby brother we never heard of.

I did enjoy Han coming back but didn't like that he was cyborg from the future. Why couldn't he be human or a space alien. I guess having the family back together is what is best.

Note there is a after credit scene that is a tease.

So there was about 25 minutes of enjoyment the rest hot garbage.

You think they’ve run out of good ideas after 10 movies?

Clearly the entire post is in jest. Getting arguably the lead character's name wrong? The bit about Han being a cyborg instead of a clone?

Cars in space... Careful what you wish for.

Cars in space... Careful what you wish for.

I died when they hit the gas. I died again when they used NOS in space.

So I finally got around to watching this.

Not always at the same time.

I'm still processing how I feel about it. The first ...fifteen? twenty? minutes felt far longer because Vin Diesel just has no charisma in this role. Heck, you could argue he lacks charisma, period, though Find Me Guilty is evidence that... no, he can actually be a better actor. Great? Nah... but certainly better. Similarly, lacking charisma is perhaps beneficial to a character like Riddick when they're on an alien planet where the story is really about everyone else. But here? Here, he really, really needs someone charismatic to bounce off of. It's one of the reasons it is a shame Paul Walker is now deceased, and The Rock helped fill that role in 8, though too bad he and Vin don't seem to get along.

Then it becomes clear that this script is desperately, desperately trying to provide charisma to make up for the blackhole that is honestly the least interesting actor and character in this whole series. On paper, this series should actually need Vin Diesel the least, but I am reminded of when Halo 4 was about to come out and a bunch of CoD Bruhs were super stoked to "finally play as the Master Chief again".

...I mean... was... was drop trooper and Reach Spartan really all that different?

So, wouldn't surprise me if there's a ton of people watching these movies that view Dom as the lynchpin that really holds it together. And, perhaps, he kind of is given that there's no "family" without Dom making a big deal about it, but... dang. Dang. I really did not like him in this movie.

That said, the chemistry of many of the other actors and their ability to pull off fun roles helped make it a far more enjoyable experience. It was also fun to see Justin Lin bring another of his Better Luck Tomorrow actors out from wherever they've been the last twenty years (actually... I must have not seen Tokyo Drift since I saw Better Luck Tomorrow, because I wasn't aware he was in that, too. Cool to see he was able to bring two of his actors from that movie in).

But it really is getting more and more difficult to ignore the sheer absurdity of it all. I mean, when the film opened and I saw the name Toretto on the helmet I couldn't help but laugh. "Oh man, we're digging into the lore!" I said to myself, and then... kind of had to reflect on the fact that these movies have lore.

I dunno. I still haven't seen Hobbes & Shaw, and while this was certainly an event, I don't feel like I'd want to rewatch it. Though, in truth, Tokyo Drift and Fast Five are the only ones I really feel the desire to go back and rewatch. The rest are sort of there for the curiosity and in case I get the chance to take someone else on the ride, but these are pretty disposable films, and I guess I just tire of that sort of thing after a while.

But, as I said, still processing. We'll see how I feel. At the very least, it's nice to have Justin Lin back in the director's chair.

Hobbs & Shaw was pretty great. They both have charisma.

Yes, with Paul Walker gone, Vin needs the Rock more than ever. Hence, the public plea to come back for Fast X to finish things.

"Oh man, we're digging into the lore!" I said to myself, and then... kind of had to reflect on the fact that these movies have lore.

What could really bake your noodle is that the entire 4-6 trilogy of films canonically happens between 2F2F and Tokyo Drift, meaning the 9 main series films were made in the machete viewing order.

Up the River
Stele wrote:

Vin needs the Rock more than ever.

Hard, hard, hard disagree. The series needed him in 2011, when, it absolutely must be noted, he really, really needed the series, he'd been given a lot of chances but none of them hit. And at the time, he was willing to play the character Luke Hobbes, but these days, he only seems willing to play The Rock.

Hobbes worked best in Five, as the antagonist, and I think people forget just how much of an antagonist he was--he's this rampaging, unthinking, unquestioning wrecking ball whose pretenses of honor and justice fail to conceal how meaningless these concepts actually are to him (Brian calls him out on this) as the bluntest weapon of American imperialism and law enforcement, swaggering into places he does not know and does not care to, threatening the locals to get his way with a big stupid gun and a big stupid pack of big stupid militarized cop CoD army men. He's a "good" cop. The rooftop chase is, frankly, perfect in this regard--while the Family runs across the roofs, Hobbes barrels through walls, literally destroying people's homes. This ends up getting his entire team of big stupid militarized cop CoD army men killed. It's a meme that he's very sweaty in Five, but I think it serves a deeper purpose--it shows just how little he belongs there. It's a very far cry from what we think of as The Rock role.

And when that's what Vin was playing against, it worked great. He worked second best in F&F6 when he was the Figure of Authority trying to wrangle the Family to achieve his ends, and then third best in F7 when he was basically not around. The time he worked the least was when they did assume he had that Brian gravity and connection to the Family in Fate. If he was willing to go back to that more antagonistic state and be more of the greasy Inspector Zenigata to Dom's rumbly Lupin, I'd agree, but I don't think The Rock is willing to be a bad guy laid low like that anymore, he seems to only play his own persona.

I enjoyed The Fast & Furious Presents: Hobbes & Shaw, saw it at the cinema pub, it was a grand old time, but I think it perfectly illustrates the issue--a better name for it would have been The Fast & Furious Presents: The Rock & The Mainstream Idea of Jason Statham. This feels like the core of the break for me, and, as I think I said here, there are plenty of places to see The Rock, but only this series has The Family, and I care about them a lot more.

I don't disagree with any of that. In fact, when I was in the seats for Fate of the Furious and it opened with The Rock, well... I was really worried about the rest of the movie. His more antagonistic role in Five is one of the reasons that film is probably my favorite of the Family movies, I guess you could call 'em (Tokyo Drift is a different kind of movie but I probably enjoy it just as much), and as things progress he just... yeah, he's The Rock.

It's kind of like Ryan Reynolds. He's never called Ryan Reynolds, but he's just Ryan Reynolds. Sometimes it works, like in The Hitman's Bodyguard because he's playing across Samuel L. Jackson being Samuel L. Jackson and what you're effectively getting is a cross-over, only of personalities rather than fictional universes. It's probably why what clips I saw of Red Notice gave me similar vibes to The Hitman's Bodyguard, because it's the same thing: actors basically playing themselves and interacting.

That said, the problem is still that Vin is a charisma vortex and needs someone with charisma, and even if he's just being himself, The Rock has charisma. But, if 9 proved anything, it's that the rest of the family has enough charisma to carry it together. Just... unfortunately, because Vin is the "heart", the movies need him to be at the core of each plot, and... that really made the opening of this one rough.

I also strong disagree on Vin lacking charisma. Granted it's from the first one, but this gif is still in circulation for a reason:

I’m dreading the Black Adam movie precisely because I think The Rock is always playing himself in movies. I don’t want to smell what Black Adam is cooking.

MrDeVil909
Posted: December 10, 9:51 AM
Will you please stop screaming

Yeah, The Rock has jumped the shark. FF doesn't need him.

I also think the movies are at their strongest when the focus is more on the ensemble than Dom. 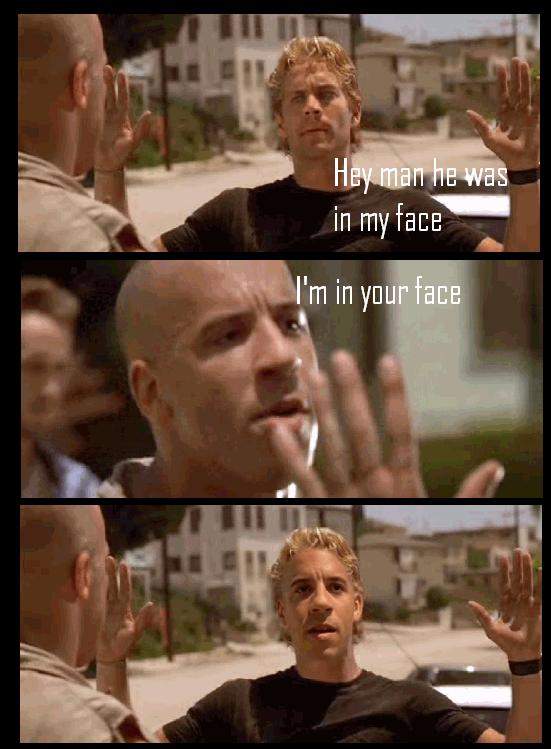