But my question is, would people rather see numbers flying out of creatures as they smack them, or a visual representation of how damaged they are?

I think it would be beneficial to see how the enemy reacts too. (knocked down, favoring one side, change stance) I don't think numbers are that important, no. There are numerous other ways to reflect status. Even the Baldur's Gate games replace hit points with unhurt, barely injured, injured, near death, and dead states. It definitely adds tension because many times the near death state can be up to 3 hits away. The player ends up hanging on every hit and miss to the point of release when the creature finally dies. (or kills you...)

I've thought a lot about this, and generally my feeling is that there should be feedback for whatever you want the player to care about. If, say, it's a Zelda style game where there are only three weapons and you acquire them at fixed story beats, then you don't need damage numbers because player choices don't really affect those numbers. But if it's a Diablo 2 style game where choosing a weapon is a big part of the game, then you kind of need numbers or else the choices aren't interesting.

The other thing is magical thinking. If the game is very low on feedback, then players will probably, say, kill a troll with a fireball and then think trolls are weak to fire even if they aren't, etc. I guess one way to put it would be, if the game has little feedback, then to some extent figuring out the game mechanics *becomes* the game. And if that mechanic-discerning game is fun, then great, but making it fun without detracting from the game game might be harder.

Not meant to discourage anything obviously -- just stuff I've thought about.

As a player, I generally like not having the numbers thrown in my face, what with it generally not being so great for immersion, but I do like them being somehow accessible 'under the hood' as it were so that I can gauge how impactful my equipment/build choices are. Part of this comes from lack of trust—I've played a great many games which give you options (e.g. perks) which seem like they might be useful, but turn out on further investigation to have mathematically insignificant effects. Even when numbers are provided (e.g. "+20% fire damage on tackle"), it can be difficult to evaluate effectiveness if you can't see how those numbers factor into the underlying gameplay calculations.

In principle though, going 'numberless' is less of a big deal if your game is sufficiently well-designed not to have 'dud' or bugged abilities/options (so I'm not actively suspicious as to what benefit a given activity/choice gives me) and provides fast and intuitive non-numerical feedback (so I don't have to play for long to get a feel for how my choices do/don't benefit me).

For some reason, I think of Sims 3 and 4 when you mention that. If you suck at dancing, for example, you just look awful when you dance. As you get better you get solid visual feedback that you're improving.

This developer (there is a video in his tweet) was playing around with UE5 adding objects into a scene and was able to add 3 million crabs with no noticeable hit to performance on his system. Sadly he wasn't able to animate them to make them all dance. It sounds like you may be somewhat limited with how you can animate objects that use the nanite system.

It will be interesting if studios design characters such that the fact they are segmented is hidden/disguised due to the fact that dynamic/deforming geometry is much more computationally intensive than static. Or segmented will become in style again. (or lots of robots, heh) You can limit the deforming geometry to cloaks, hoods and skirts to limit the amount of computational strain.

It also makes me think about the sdf tool I linked above or in the drawing thread. That has the capability of blending and bridging the geometry on the fly. So again, the non deforming parts of the character could be segmented with the joints being blended real time. I am not 100% certain but I believe UE5's Lumen has sdf style tech for its global illumination.

A very interesting Twitter Thread about open worlds and narratives:

There is a solid subset of games I play which aren't narrative at all in 90% of cases (Traditional Roguelikes in most cases, even some Action Roguelikes) as well as strategy games (e.g AI War 2, Mainframe Defenders) but I'm going into those with that mindset already in place - there is no story, no real emotional attachment like what's discussed. Outside of those though, a lot of what's talked about resonates with my experiences, both as a consumer and a creator of Video Games and I think it's something that's missed in a lot of cases.

GameMaker got a free version (sort of)

Long overdue even with its limitations.
It is essentially an indefinite free trial with no export options.

Yea I think that is a good move for them.

Friends, Space Game Junkie is turning ten next month, and to celebrate I'm hosting a game jam for devs to make fun space games that I'll stream on the day of. If you know any devs that might want to participate, please direct them here, and thank you.

Figured out how to replace the cursor in my game today and felt like a genius. Also made a key part of my game feel so much better.

After procrastinating for months, and hesitating about what I'm going to make, I think I have a good idea, and I jumped back into Godot this week to try and put together a proof of concept. Not much progress so far, but at least I can display some dialog: 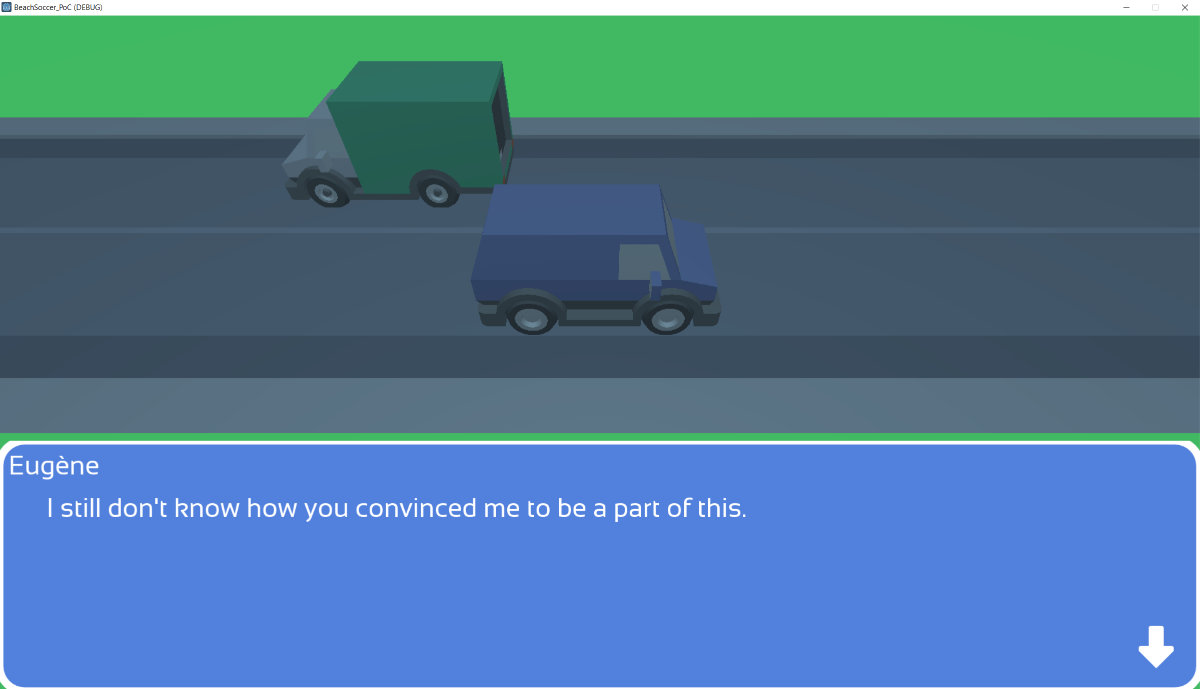 So far, the minivan can bump randomly, and a new delivery truck will spawn once in a while and will run in the other direction.

I was able to use some dialog box code I wrote back in June. This code had some significant bugs in it that I was able to fix today. There are still a few things that it should be doing but won't do (yet), but that will come in due time, once I move past the proof of concept phase.

On the menu for the rest of this week: display a portrait of the character currently speaking. Hopefully I can knock that one off tomorrow.

The main concept of the game is turn-based, grid-less beach soccer, with visual novel/dating sim elements. Probably a bit ambitious for a first game, but oh well.

Edit: That took less time than I thought... 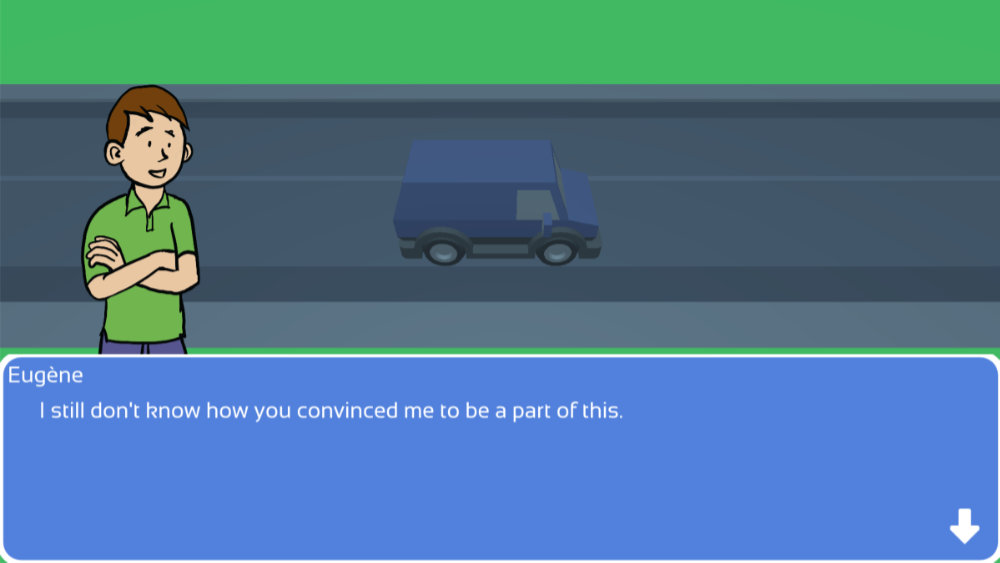 Fantastic! Keep it up.
It really amazes me how easy it is to be wholly original and creative in the indie game space. And how metrics and nepotism are killing AAA...

I'm not sure this is the right thread for this post, Rykin. Perhaps the video game business stability/instability thread?

If true, is this behaviour unethical? Probably.

If true, is this behaviour illegal? Probably not. The market isn't regulated. And no one involved in the relevant transactions was exploited.

I'm not sure this is the right thread for this post, Rykin. Perhaps the video game business stability/instability thread?

If true, is this behaviour unethical? Probably.

If true, is this behaviour illegal? Probably not. The market isn't regulated. And no one involved in the relevant transactions was exploited.

Doh this isn't the thread I meant to post it on. 12 hour work days are rough

The goal for this week is to create a locker room scene, where the player can walk around and talk to the other players. Since this will be in 3D, that means I need to figure out how to create super simple 3D models in Blender and export/import them into Godot. I won't be doing 3D characters for this game, the plan is to only use sprites, so this makes the Blender bit way less stressful. I found a sprite generator to create a few sprites I can use (though the plan is to create better ones for the final game).

Managed to get something going: 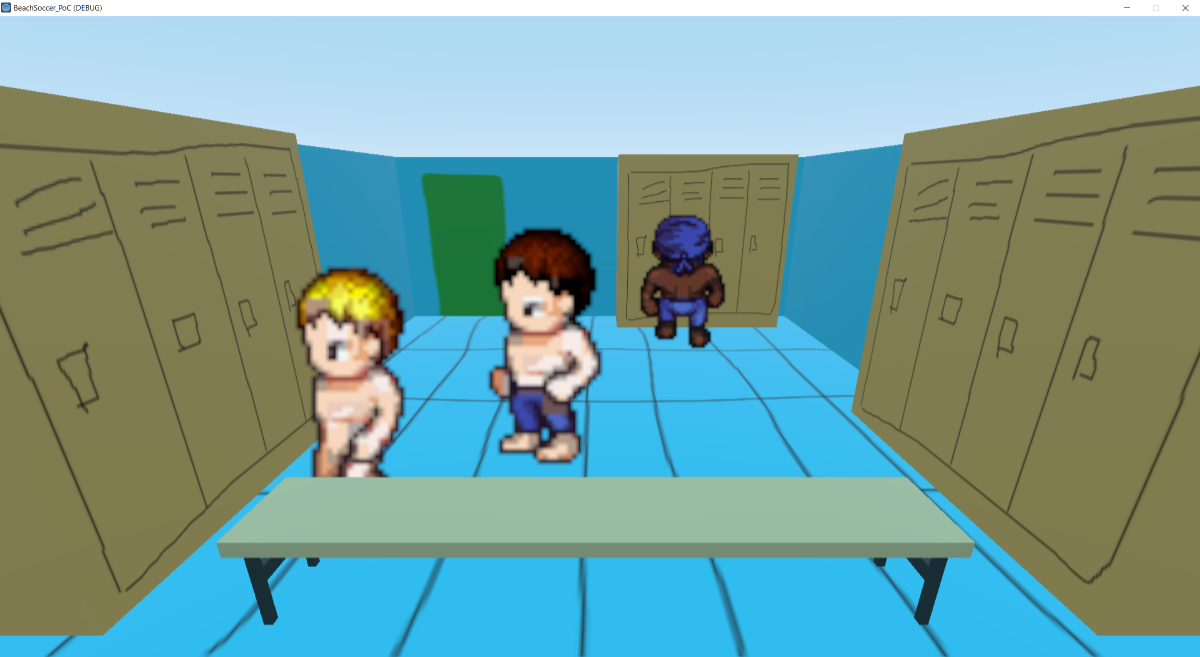 The character player (the one in the middle) can walk around the locker room. The collisions with the lockers, the NPCs, and the room work, but not with the bench, I'm not sure why yet. I haven't played with collision layers yet, so that could explain it.

Next step is to allow the main character to talk to the two NPCs, and then to exit the room via the green door in the back.

Also I know there is at least one serious bug in my dialog system. I have an idea how to fix it, I should be able to get it working before the end of the week.

I haven't played with collision layers yet, so that could explain it.

I'd wager that is the issue for sure.
Keep up the inspiring work!

I haven't played with collision layers yet, so that could explain it.

I'd wager that is the issue for sure.
Keep up the inspiring work!

It wasn't. I'm still not sure what it was, but I fixed it by making the collision box way higher than it should be. It won't matter for this game since there won't be any real-time jumping. I suspect it has something to do with the scaling of the various elements, but I won't worry about it for now. I still took the time to set up my collision layers.

One thing I will want to spend some time on after I'm done with my prototype is the organization of the asset files. Right now, it's a mess. (To be fair, so is the Documents folder on my Windows user account, but that's a different story.) I will definitely want to differentiate between the imported assets (meshes, textures, sprites, etc.) and the Godot assets (scenes and scripts, mostly). Not the most interesting aspect of the project, but it's easy to see how important it is.

Vector
Posted: September 1, 4:48 AM
Me Love You Long Time

Progress has been fantastic with my game. Just got a new menu system running tonight.

Spent a good portion of my day getting dialogs working for the locker room scene. Turns out there were issues in my dialog box and my input processing code. Things now work as expected:

Some fun bugs I encountered: 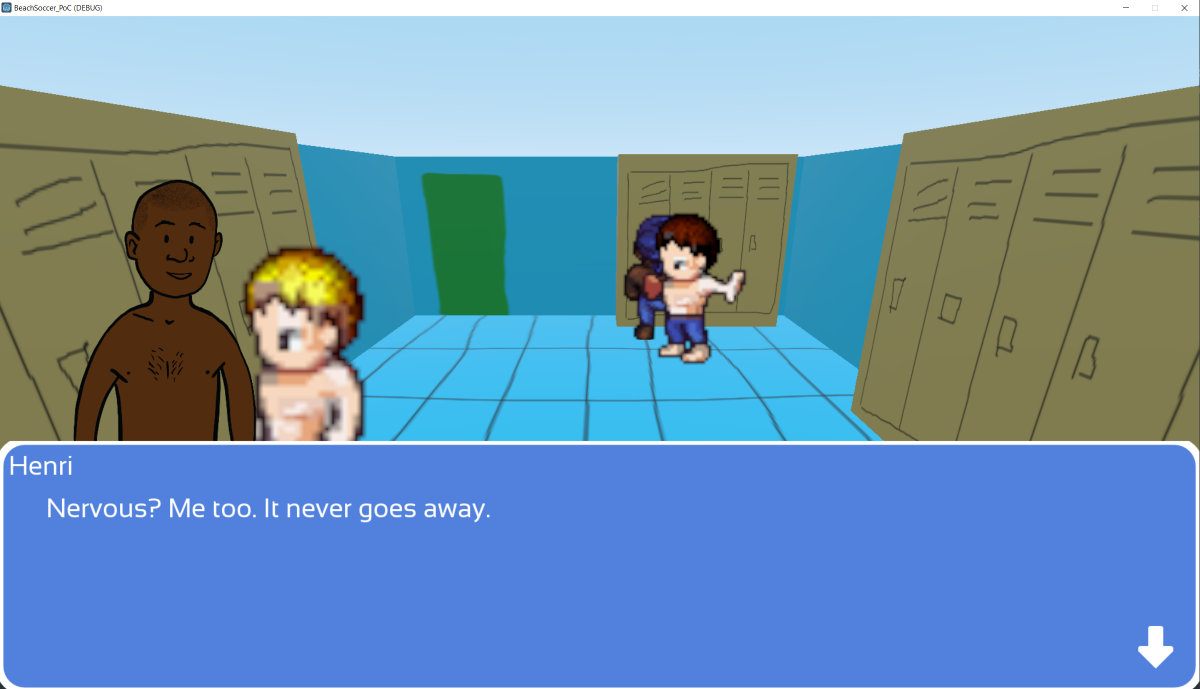 Next up: Allow the player to exit the scene via the green door, and then creating the actual playing field (which should be a simple model in Blender), add the goals (another simple Blender model), and put sprites on it in the engine. I also want to add a second character portrait on the right, but this should be relatively simple, and will wait once I'm out of the proof of concept phase.

I also started a game dev blog (linked in my signature). Right now, the plan is to just post updates on the development, but I might add some tutorials or code samples later.

Work on the actual turn-based portion has started. It doesn't do anything yet, but hopefully I can get to a point where the game can display a menu or something later this week: 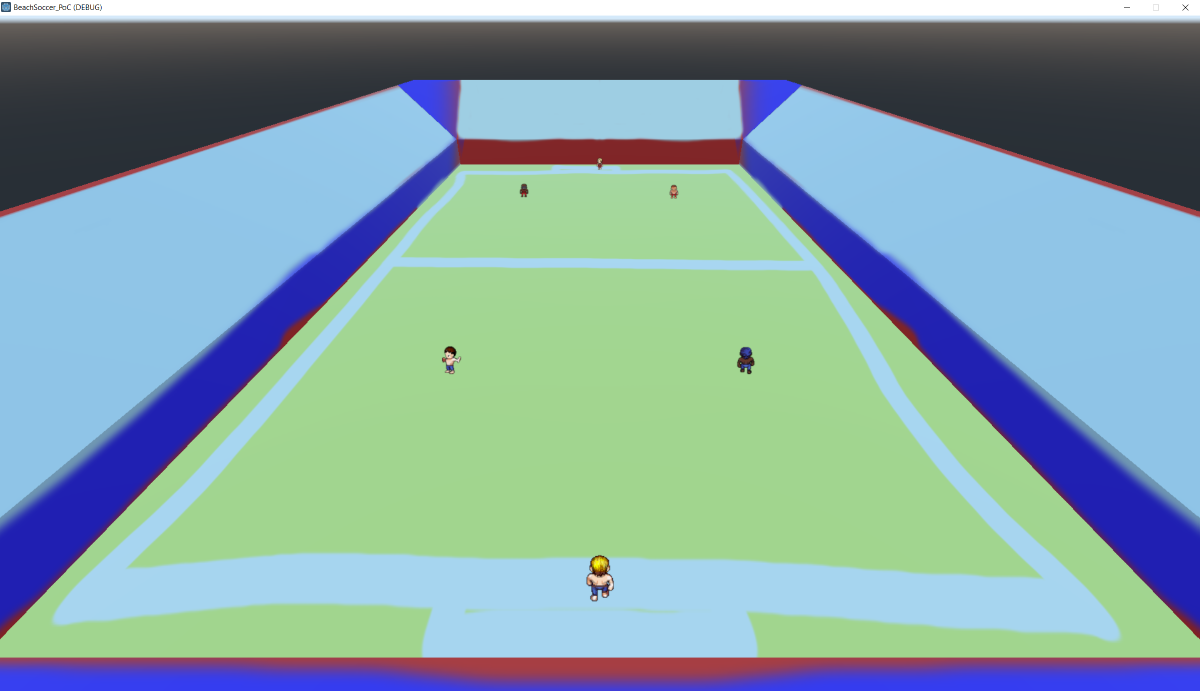 I only added 3 players per team for my prototype, but the final count should be 5 (with 4 players in reserve that can be swapped out during the actual match).

I will need to figure out a good way to do the textures (and export the UV maps from Blender).