Lots of action in FP1 & 2 today. Happy for no injuries. Some amazing photography coming out from that downpour, too!

Holy sh*t, what a f*cking race.

So, so gutted for poor Albon, but check out the post race action if you want to see what a real class act looks like in how Hamilton claimed responsibility for the incident and did everything he possibly could to buoy Albon's sprits -- as well as to genuinely express support and excitement for the collection of exceptional young drivers who performed so well today, and sincere joy at the prospect of having closer, more exciting racing challenges next year and into the future.

Speaking of which, also check out the post race action with both Gasly and Sainz if you want to inject some pure, unadulterated joy straight into your veins. The real unanswered question from this weekend is which of those two wins the "good guy who deserves it" award -- I certainly have no idea where I stand on that one.

Also very exciting to see both Red Bull/Honda and McLaren taking big wins at the end of the season. Maybe the gap to the top two will still ultimately prove insurmountable next year, but at the very least this is a great way to head into the off season (so long as neither has a terrible weekend at Yas Marina, of course).

As for Ferrari... well, that happened I guess? On the bright side, for most of the race it definitely felt like their strategy team was making good calls. But, you know, not a great argument for letting their drivers race, eh? I mean, it definitely wasn't full on clown shoes territory like many previous situations this season, but it still was their worst result of the year, and NOT a good way to go into the break on a number of fronts. Wah wah.

Yeah, that race was fan-f*cking-tastic. What fun! Those opening laps were incredibly clean, close racing. So much great midfield action too, which again, was sadly under-covered. Definitely sucks for poor Alex, yeah. I give Lewis a lot of credit though for owning it immediately, and not waiting until later when he was penalized to speak up. Good dude.

EverythingsTentative
Posted: November 18, 2:39 PM
I think I know, but I have no idea.

Stroll is terrible. One good opening lap doesn't negate his horrible quali performance, inability to manage tires, and lack of points. Hulk would be back in that seat next year if it wasn't for Stroll's dad.

Yeah, he's undeniably terrible at qualifying, but especially relative to that he makes pretty incredible things happen on race day on a regular basis.

That being said, there are certainly drivers without seats for next year (Hulkenberg, mostly) who probably would deliver better for the team if you purely looked at on track performance. But, that's not how the real world works -- Stroll brings far more money to whatever team he's on than a few extra points throughout the year would ever account for. Also, word on the street is that the main reason Hulk missed out on other seats (Grosjean's, for example) was that his salary demands were too high and he didn't bring along enough in the way of additional sponsorships. So, if he can't compete with the financial balance that Grosjean represents, he certainly can't compete with Stroll.

Yeah, he's obviously the least-accomplished driver on the grid, but even the worst driver on that grid is so many lightyears beyond anybody in this thread that I'd hesitate to call him terrible.

EverythingsTentative
Posted: November 18, 3:26 PM
I think I know, but I have no idea.

I won't hesitate. He would be the equivalent to the least accomplished person in this thread if his dad didn't buy his boy an entire racing team.

I don't necessarily dislike Stroll. I mean, he is doing a real good job of making Perez look real good, but he is just not a good F1 driver. My skill level aside.

For the next series of Drive to Survive Netflix should riff off the Ford vs Ferrari movie and call the season "Ferrari vs Ferrari."

Yas Marina supplied yet another dull race, as expected. It was almost interesting before they "fixed" the DRS server issues.

Decent mix of teams in the bottom five: 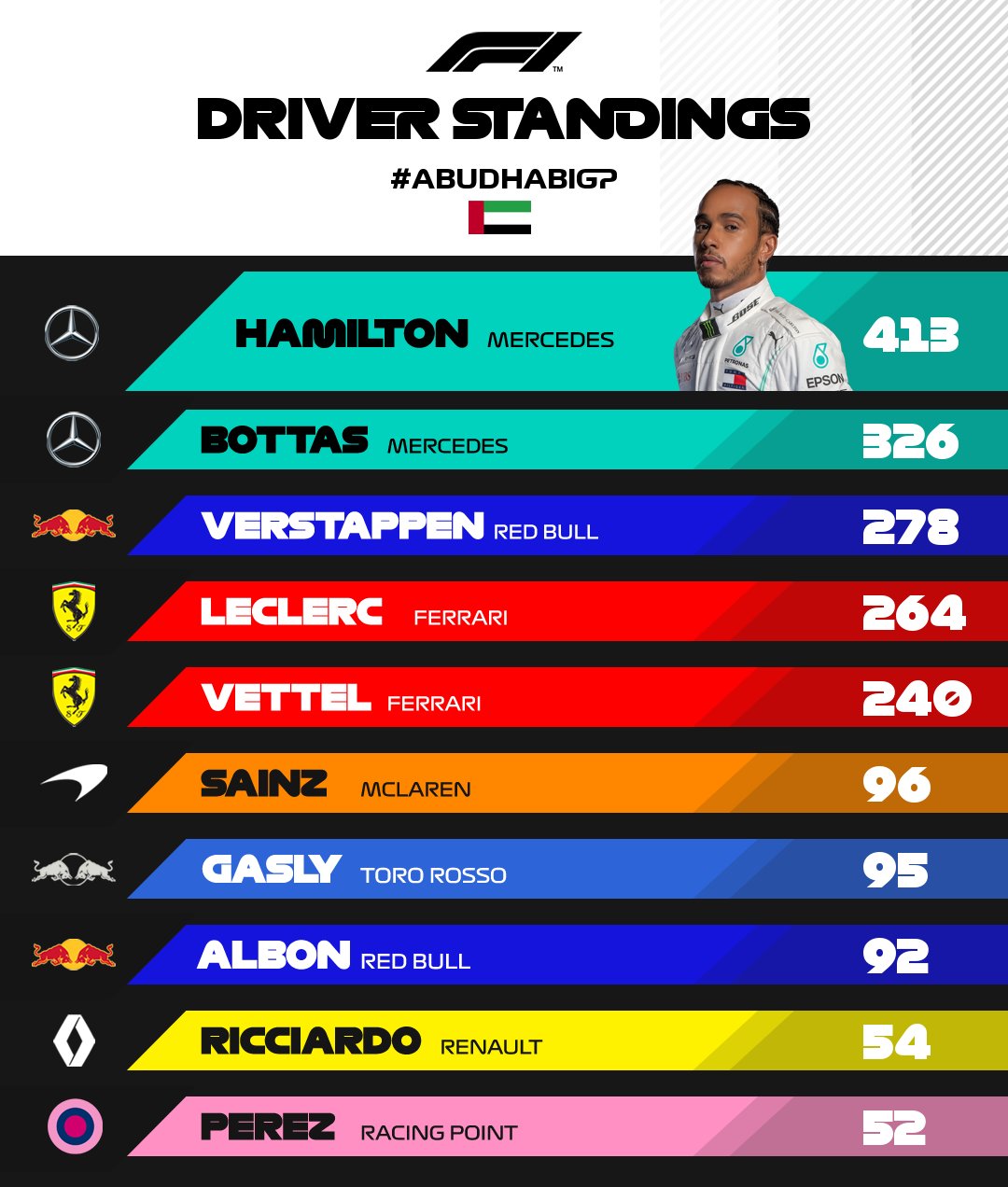