When I was a lad, my parents would take me to the Mohawk Mall and go check out the sales at Bradlees. What was a twelve-year-old boy, flush with his weekly allowance, to do? Why, hit the Dream Machine video arcade, of course.

The Dream Machine isn't there anymore. Neither is the Mohawk Mall. But I've got a Steam account packed with games that would have cost me dozens of quarters back in the day, courtesy of the generosity of the GWJ community. They may not have a lot of depth to them, but they're fun in short bursts and are well suited to playing while standing up.

So join me as I visit the Fever Dream Machine, an arcade that exists only in my fantasies. The year is 1989, I've got two whole dollars burning a hole in my pocket. Let's make it rain!

Shower with your Dad Simulator 2015
Installed by: Gravey
Playtime per quarter: 15 minutes 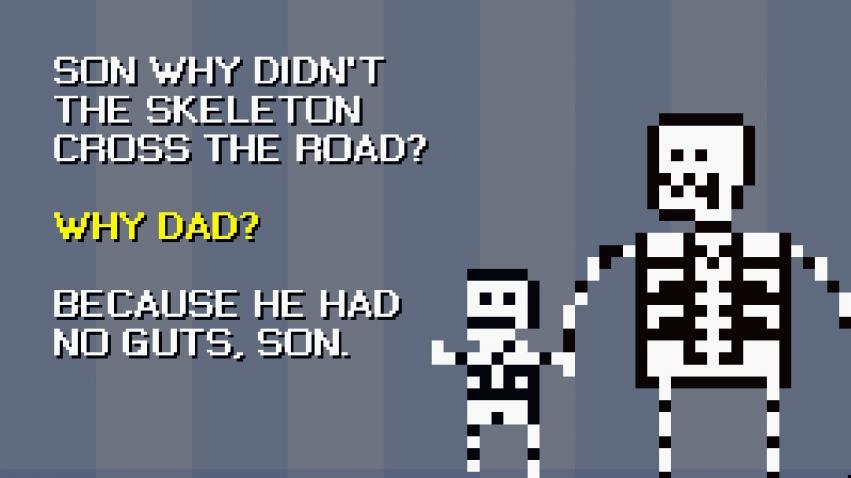 It's a fast-paced, memory-matching action game where you control a toddler in the YMCA locker room trying to get to your father in the showers. Toddle hither and yon as you avoid slippery soap puddles, stumbling wet floor signs and dads who are not yours on your way to your own progenitor, only to be rewarded with a horrible joke.

It reminds me of all those terrible Atari 2600 games where you controlled mundane things like a blocky tube of toothpaste and shot fluoride missiles at bacteria inside a gigantic mouth. It's a simple activity that nobody in their right minds would make a game out of, but I'm glad someone remembers how.

The only reason I stopped playing was my wrist started to cramp up. I'm not as young as I once was, and the arrow keys seem less ergonomic than other keys somehow. 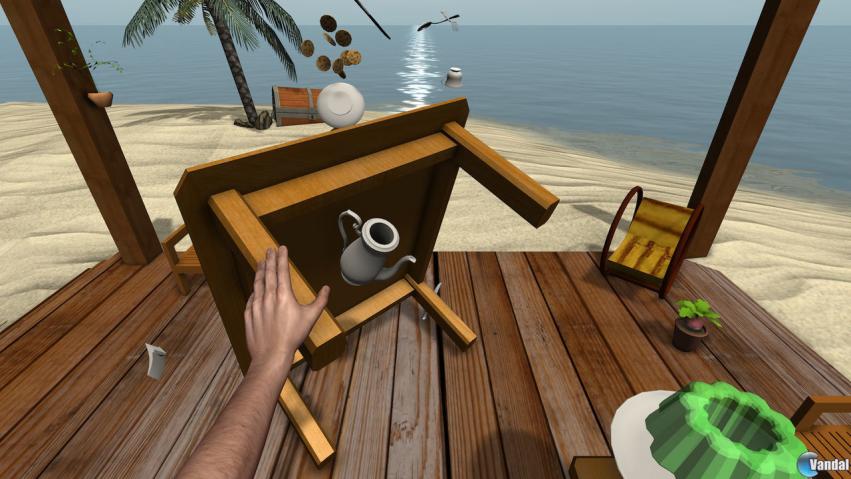 Remember Surgeon Simulator? Imagine those controls employed not in the service of rending a (soon-to-be) human corpse in twain, but rather in serving tea and biscuits to a teddy bear who insults you whenever you drop something.

Somehow, that makes it more disturbing rather than less. 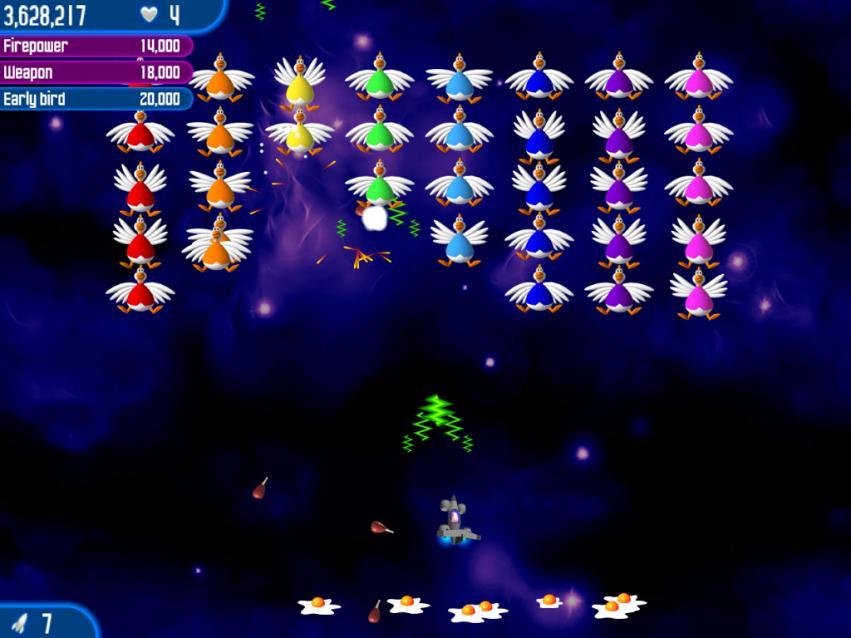 It's Galaga, but with chickens. Evil hens are befouling the solar system (get it?), and it's up to you to stop them. At the start, all you have is a ship and a paltry (get it!?) laser, but fear not, for you can collect upgrades to turn your ship into a real roaster.

This sort of game demands a trackball for the full experience, but the mouse works almost as well. No matter how you control it, Chicken Invaders 2 is real fun.

Chicken Shoot Gold
Installed By: Danopian, also known as my go-to guy for my most fowl games.
Playtime per quarter: Five minutes 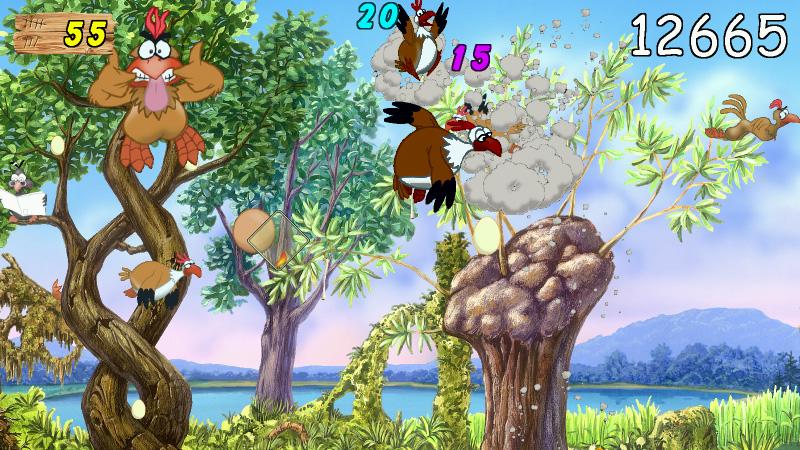 I love light-gun games. The problem with them, though, is that you need a light gun to play them. Using a mouse to click in targets is not a game; it's Windows Explorer with a score-chase mechanic.

All the while I was playing Chicken Shoot Gold I kept waiting for a prompt telling me that if I clicked enough chickens I could save fifty dollars a month on my insurance premiums, but it never happened. 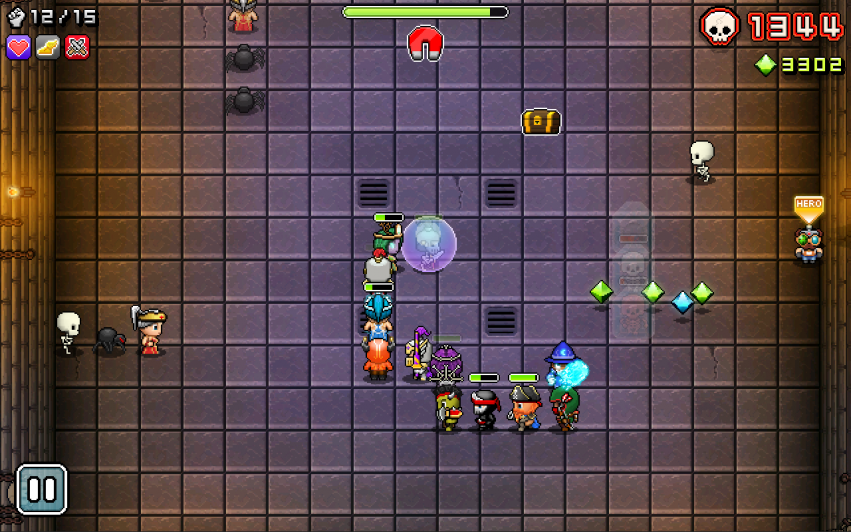 Sometimes a game in the arcade will demand multiple plays. Nimble Quest is one of them. It’s a simple, Snake-like game where you guide a band of heroes around a small dungeon until you kill enough things to move on. As you kill things, you unlock new heroes which makes your chain of heroes bigger, adding to your attack strength but increasing your vulnerability to crashing into each other and dying.

If you like Snake, and you like roguelikes, you’ll like Nimble Quest. It’s a game that looks for all the world like it should be free to play on a phone, but it’s on Steam and it’s quite good. 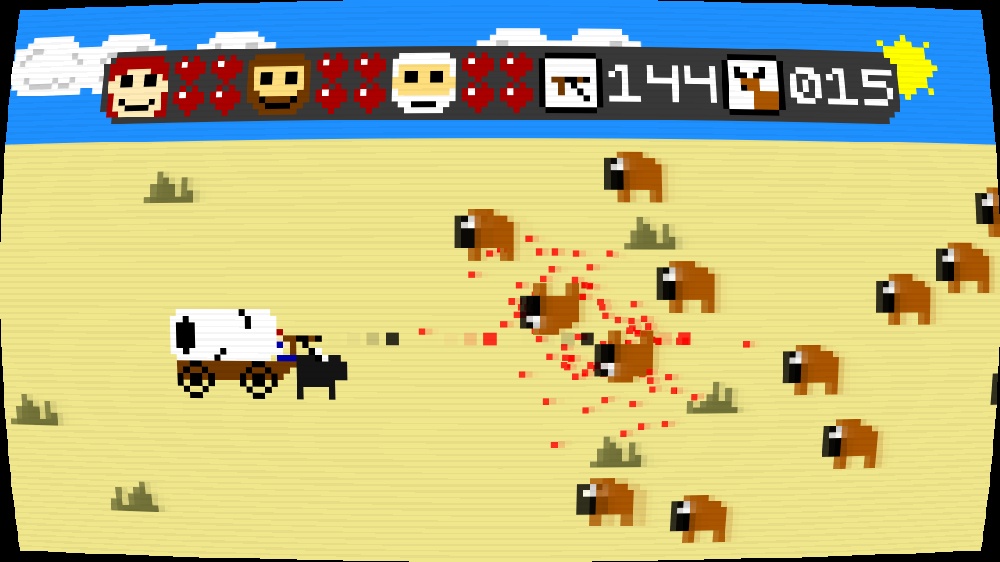 Remember back when we first played Oregon Trail and thought it would be so much better if it were Defender? So does Sparsevector, makers of Super Amazing Wagon Adventure. That about says all you need to know.

It is probably the only side-scrolling shoot-em-up where you can die of dysentery.

Well, I hope you enjoyed this quarter-fueled glimpse into my imagination. As consolation, I have an Important Announcement:

Mark your calendars, boys and girls! I’m preparing to do something wild and wacky in a month’s time.

May is going to be “DoubtingThomas, May I…” month here on Gamers With Jobs. That means that the four reviews that air in May will be selected by you, my favorite (and only) audience!

That’s right! All you have to do is pick a game from my Steam library that shows fewer than thirty minutes of playtime, and that I haven’t already reviewed here before. If there’s a game you have your heart set on that isn’t in my library, PM me anyway and we’ll see what we can do. Maybe it’ll be something that I wanted to buy myself anyway. (No gifts received after April 1st will be considered.)

Just PM me your pick (one per customer, please). I will send the list to Station Management, and the Conference Call crew for the April 20th show will select four winners by whatever means they see fit.

There are games in my library I’ve forgotten I bought. I look forward to hearing what you all come up with.

Nimble Quest. It’s a game that looks for all the world like it should be free to play on a phone

Definitely a fan of the shower sim. I'm going to check out Tea and Nimble, too, I think.

Definitely a fan of the shower sim. I'm going to check out Tea and Nimble, too, I think.

I enjoyed both, but if you have to pick one I'd go with Nimble. Tea Party Simulator is exactly like Surgeon Simulator in the sense that it doesn't actually appear to be possible to complete the objectives, and trashing a tiny tea set is only fun so many times. Nimble Quest, on the other hand, has more legs than a human centipede.

Okay, so we have enough entries to make a go of the contest at this point, which is a relief. I was worried I'd have to stuff the ballot box to get enough suggestions for four weeks.

Looks like the iOS version of Nimble also has online competition ("Arena") with what it at least calls "guild" play.

So, any Goodjers want in?

Looks like the iOS version of Nimble also has online competition ("Arena") with what it at least calls "guild" play.

So, any Goodjers want in?

Huh. Not sure how much I'll play, but I won't mind dragging down the guild with my usual ineptitude.

I am also greatly amused that "Right-handed" is an option instead of left handed.

Nimble Quest. It’s a game that looks for all the world like it should be free to play on a phone

Ended up restoring my phone, and lost all my unlocking progress on Nimble Quest. I think that ends it for me.