Yeah I've been enjoying all the star wars comics.

Interesting. Probably good thread to talk about comics, books, and toys, since each movie and show already has their own thread. Anyone else read Bloodlines? Liking it a LOT, though it feels a bit hemmed in by the constraints of where it needs to go at times... just a couple lurches from point A to point B that didn't ring quite true or plausibly for me. Still some very clever set up for TFA and a great character in Casterfo.

A Malaysian Star Wars fan applies a traditional form of Malay shadow puppetry to SW and the results are pretty spectacular.

I mean I had a shelf full of the expanded universe novels and watched the movies probably hundreds of times and even convinced myself that the prequels weren't that bad (they absolutely are that bad) for a long while...

But even with all of that it still seems to pale pretty significantly next to people that are actually really into Star Wars.

I don't understand that reference.

I thought this was worthy of a bit of thought. 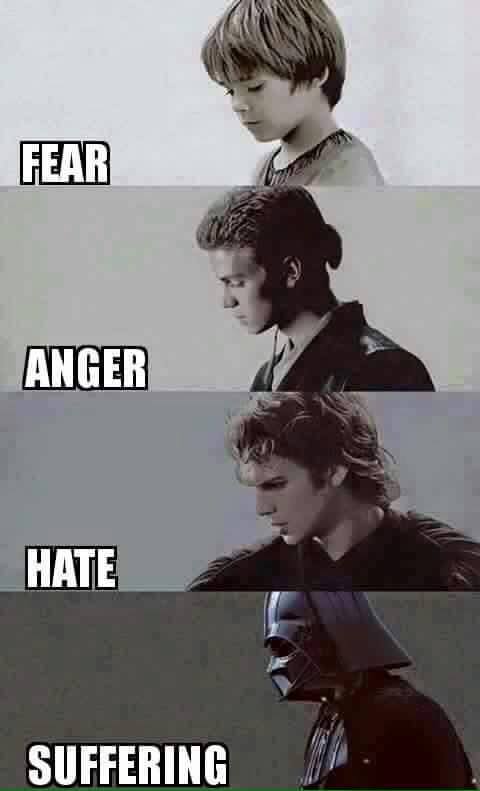 Nobody said he couldn't storyboard. It's script writing skills he lacks.

I'm fine with his overall arcs but the details should be left to others. I'm hoping we get some more nuanced stories out of some of the non-episode character films. I can only handle the "and this one person saves the galaxy" story so many times.

I have a question about this title at Amazon. It sounds like a MMO, but then it doesn't. I thought the on-line Stars Wars game was close down. bit I see some recent nibbles at this game. Can someone clue me in.
'
Star Wars: The Old Republic - Knights of the Fallen Empire Starter Pack - Amazon Bundle [Online Game Code] by Electronic Arts
Overview
This starter pack includes the Star Wars: The Old Republic (“SWTOR”) game and features the new story-driven expansion from BioWare, Knights of the Fallen Empire, launching on October 27, 2015.

Knights of the Fallen Empire includes the first nine chapters of an evolving story which continues with chapters releasing on an ongoing basis; when you apply this code to your account you will receive access to every chapter released as of redemption date and all future chapters released while you are a Subscriber.

You also receive 90 days of Prepaid Subscription Game Time and 2,400 Cartel Coins to ensure you start with all the gear and equipment you need to get off to a fast start.

Get it all in one bundle for $39.99 USD and save more than 35%† off the retail price of each bought separately.

This special Starter Pack offers the Star Wars RPG gamer awesome benefits including 3 months of unlimited prepaid subscription level access to all of the exciting game features and an unparalleled story-driven experience all the way to Level 65.

Plus we’ve included 2400 Cartel Coins you can use to purchase boosts, special gear and collectible items from the in-game Cartel Market – all for $39.99, a savings of over 35%†!

This Starter Pack is your path to becoming the Legendary Hero or Epic Villain at the Center of Your Own Star Wars story – so choose your path and join the battle today!

This Starter Pack is also a great way to gift the fun of exciting RPG gameplay to a friend!

Play through exciting story-driven action starting at level 1 or jump directly into the Knights of the Fallen Empire storyline at Level 60 as you become the Outlander and lead Companions in your own heroic Star Wars adventure.

Get unlimited access to PvP Warzones, PvE Flashpoints and Operations

As a Subscriber, receive monthly complimentary Cartel Coins to use in the Cartel Market for Gear, Boosts, Mounts, Decorations to customize your Galactic Strongholds of personal luxury, and more in-game!

Get unlimited access to the Galactic Starfighter Digital Expansion, featuring intense 12v12 free flight PvP dogfighting in space. Receive 2,400 Cartel Coins to spend in the Cartel Market where you will find great New Player Packs with Experience Boosts, Gear and Weapons plus your choice of Cool Mounts, Speeders and Pets – all just a click away inside the in-game Cartel Market.

Get the Amazon Starter Pack exclusive pet, the Juvenile War Rancor. This mini-pet is big on intimidation and sports a big tooth-filled maw even at this size and will try to ward off the fiercest of enemies, as he runs by your side ensuring you are never alone as you embark on adventures across the galaxy.

Plus, redeem the Starter Pack by September 30, 2015 and receive the Nico Okarr’s impressive Duster Coat and redeem by October 19, 2015 to receive the Star Wars: Knights of the Old Republic – Inspired Swoop Bike! Conditions and restrictions apply. See http://www.swtor.com/fallen-empire/r... for details.

That's the new MMO. Galaxies was shut down.

TOR is, I believe, F2P now if you haven't tried it. That looks like a paid expansion for it.

Star Wars: The Old Republic is a F2P game, you don't need to buy anything to get started. It is indeed an MMO. (Our thread is here.)

Star Wars: Knights of the Old Republic (1 and 2) are sp RPGs.

Star Wars Galaxies shut down years ago, if that's what you mean.

Thanks folks. I realized I posted this in the wrong forum and posted it over in the 'Heroes' on, (which is probably an off topic...).

Is this any good? Worth it?

Only for that package from Amazon. Go to the SWTOR site and download the game, it doesn't cost a penny to start. The pay for stuff is a subscription (which you don't have to buy) and expansion content. You won't get to the expansion content for a while, so no sense in buying it now.

I agree with Garion. I played it to max level at launch. It's a nice little game and I guess it's seen some vast improvements. Worth trying out to see if it's your thing before getting a paid expansion.

The subscription gives you lots of extra swag/leveling benefits/access to the more recently released content. It's normally $15/month, if I remember correctly. This bundle is also throwing in about $10-$20 worth of the Cartel Coin currency, which can be used to buy a variety of things in the in-game store. That said, no subscription is required to play the game, and if you want to give it a try, very little of the content is gated behind a subscription, and I believe you're looking at dozens of hours of playing before you get to any of it.

O.k. Thanks again. And I reduce that post over in 'Heroes' as you asked Oily':)

Thank you =) We're in the middle of a raid right now.

I liked The Old Republic, but it didn't run very well on my Surface. I'd have played more if I had a proper PC.

Donald Glover is our young Lando in the young Han movie.