About halfway through Season 3. Some thoughts...

-Hey, I care about the people now! In spite of how the crew of the Rocinante feels like a b-tier powerless Fantastic 4, and everyone else feels like a scumbag (except Bobbie) I can at least name each character, I know their unique struggles and motivations, and I generally am interested to see how they interact with one another.

-I am interested in the protomolecule and what its deal is, and am looking forward to it being more than just the Cold War nuke analogy. And I feel like that is coming with what just happened.

-I enjoy that anyone who isn't one of the top tier cast doesn't have plot armor. I know that there are maybe 8-10 people who are going to make it all the way through, but anyone else feels like they can eat it at any time.

-I know the Roci crew is supposed to be the audience in to the world, but these are the luckiest, most un-earned competent space miners possible.

-I am still surprised how much the Miller noir plot from Season 1 still colors what I think of the world. Even without that plot anymore, everything seems more dirty and grounded than I think it would be otherwise.

-I think I have about 6-7 SyFy episodes left, and I will be interested to see if/how the show changes when it goes to Prime production.

When Amazon takes over it's mostly more cursing

Is the extra content in X-Ray being discussed here just the behind the scenes videos? It kind of sounded like it was like minisodes or something.

So how do I find it exactly? I only see photos and behind the scenes in X-Ray.

deftly
Posted: January 6, 3:59 AM
It Burns When I Everything

So how do I find it exactly? I only see photos and behind the scenes in X-Ray.

I ran into the same problem. It turns out the bonus scenes are not yet available on TV platforms (or at least most smart TV apps and Roku). Currently, you need to watch the episodes from a browser or the Prime video app for the Bonus Scenes section to show up in X-ray.

Ah it's probably that. I'm using my smart TV to watch in UHD. I'll check the android app and browser.

I think this might have been my favorite episode of the show.

Also, it was startling to see Holden in the bonus scene without 6 seasons of beard growth.

They’ll be able to wrap up the Marco storyline in the next episode at least, they’ve laid down all the necessary story elements to get there.
It seems like they might try to continue in some form, though. The Cara & Xan stuff that has been opening each episode is from one of the short stories they write between the novels and wouldn’t have been relevant to the overarching story for at least two more seasons- it’s weird that they would dedicate precious time to it this season unless they think there’s a chance to keep things going.

I'm also really confused by the Laconia scenes. Or, more specifically, why they're there at all.

Since the first five episodes were excruciatingly boring, the Law of Averages says that the finale must be amazing, right? (Right...?)

I believe the authors said the final episode would be more like an episode and a half.

It really feels like they wrote this finale not knowing if they would get to make more. The two arcs really seem to wrap everything up. The Martians, the Earthlings, and the OPA all worked together to peacefully solve a common threat, the mad scientist who manipulated the protomolecule is in prison, everyone is back on the Rosi, and the Aliens are long extinct but they left a big thing for us humans to play with. Good on the Protheans.

Seriously, I feel like I just saw the end of the expanse, and I am not really sure where they will go from here.

P.S.: Amos is my spirit animal.

Season 3 was the final season on Syfy, they knew the show had been cancelled before they finished filming so they tweaked the ending to also function as a series finale in case they weren’t able to continue elsewhere.

Oddly enough the larger story of the Expanse sort of falls into three arcs and both times they’ve been cancelled have happened to be at the ending of one of the arcs. At the end of the current story there’s a 30 year time jump so a gap in production would ironically be appropriate.

Then again, the crew of the Roci and the rest of society didn't go into stasis for those 30 years, so, knowing creatives, perhaps they're all jumping at the chance to write new stories between books 6 and 7.

Really enjoyed S6:Episode 5. I think this kind of story telling must be most beneficial to people who have gotten to love the characters. Watching drunken, beglittered Amos half-proposition Bobby after working out why it's right to stay instead of give up was the highlight of my week. That scene is meaningless without a love for those characters and an understanding of where they've been.

And now it's over. I wouldn't be surprised if in the coming weeks Amazon announces a follow-up series to cover the remainder of the novels.

I thought for sure we’d see one of Laconia’s Magnetar-class ships in a flash-forward or coming through the gate at the end, considering one has been in the opening credits all season.
Still, it was a good finale. I think this has been my favorite season, even if a couple things felt rushed. Still sad that we might never get to see Amos’ “Final Form.”

I thought for sure we’d see one of Laconia’s Magnetar-class ships in a flash-forward or coming through the gate at the end, considering one has been in the opening credits all season.
Still, it was a good finale. I think this has been my favorite season, even if a couple things felt rushed. Still sad that we might never get to see Amos’ “Final Form.”

Watch the end credits, gate flips red and there is a Laconian ship highlighted. Small teaser, but teaser nonetheless.

In case you missed all the Easter eggs from that graphic: 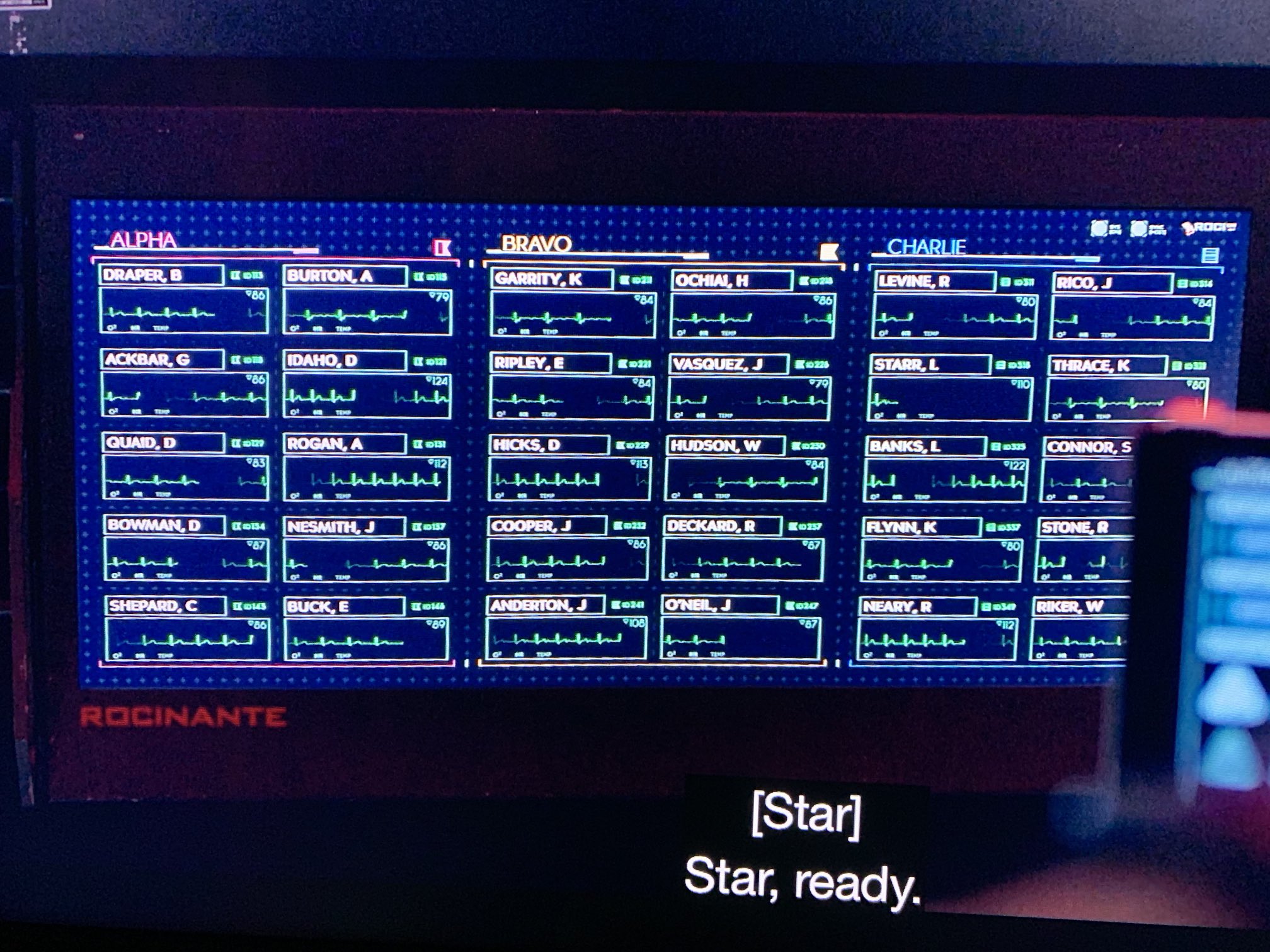 So how are the books?

Really good, and the final book just recently released. While I would recommend starting from the beginning, the show is close enough to the books that you could start with book 7, Persepolis Rising, without much confusion. The only major differences that you would need to know is that Alex is still alive and that show Drummer is a hybrid of several book characters and pretty much everything she did in the last 3 seasons happened to Michio Pa instead in the books.

The third book (?) where they get to the slow zone is quite a bit different from the show.

I meant more in terms of story consequences. There are a lot of individual differences but it all ends in the same place and the what is different doesn’t really effect the overarching plot, especially with the 30 year time jump after Babylon’s Ashes/season 6. How the show ends would make it easy to just continue with the books (though I still recommend reading all the books).

Stealthpizza
Posted: January 15, 3:20 AM
If I pick a tag then the mods will be able to see me

That was the most Holden thing Holden could have done.

This season felt a bit underwhelming to me, but I still liked it.

Those initial scenes from every episode were just useless. Even if they're a prelude to a new season that may or may not happen, I don't think not having them would hurt it at all.

Yeah not sure they were needed, I get it, because they wanted a bit of a set up but didn't really make sense given they knew going into this season it was the last and they could have just released them as a mini episode if a film or something did get made.

I'm suprised they didn't change the ending of the war, having the Free Navy Dutchman into the gate is there to make it clear the force that killed the gatemakers is still knocking about and getting a bit annoyed. I think if I hadn't have listened to the books, I would just be thinking "huh bit lame" right now.
That said, I loved the final assault on the railguns and the reveal the Pella was hidden.