I couldn't find a thread for Syfy's new show The Expanse, so here it is. Is anyone else watching it? If so, discuss!

I just finished episode 2 and it still feels like it's trying to set up the universe, so the plot and characters are still a bit thin. The jumping between multiple disjointed storylines does feel GoT, but it hasn't hit that "Suitably Epic" feel yet that I think it was trying for. A better analog to copy would have been Battlestar Galactica's first few episodes.

So far, the only moments of tension have come from the survivors aboard the shuttle, Knight. It's got the right mix of the mystery of Lost and the drama of Apollo 13 that I've found myself much more interested in these characters than any back on Earth or Ceres.

Plus, I love that they're keeping the Mars faction off screen for now. Like not revealing the monster in a horror movie, I really hope this continues because it adds to their buildup as the antagonists, especially if there's a major twist later on.

It's the first Syfy series I've watched in a long while (since the Dune remake, actually) and I'm really glad to see them back in form. Now if they'd only drop the goofy name and go back to being "The SciFi channel".

I watched the 1st episode and enjoyed it. I like space stuff. I'll be watching the other 3 episodes in the next few days since they are available online.

The first episode showed promise. The books, of which I've read all, are some of the best science fiction I've read in a while.

Episodes 3 & 4 is where everything starts hitting the fan.

Oh yay, I didn't know this was out yet! I've read and loved all the books so far, so I'm pretty interested in checking out the show. I'm happy to see SyFy finally getting away from reality TV and back to science fiction.

Now I just need to remember to set my DVR....

I binged episodes two through four last night. I'm very pleased with how well the show is tracking with the books, which were absolutely brilliant.

I always pictured Miller like Columbo, but with a hat.

To be fair to SyFy, the books' authors are very close to GRRM and share some of his style. It's no surprise that this carries over into the show, especially since they are writing at least some of the episodes.

And I'm surprised that you didn't like it, it seems to be right up your alley. As mentioned above, episode 3 and 4, sh*t starts to get real.

Oh, I'm gonna keep watching it, I just felt like Miller was the only part they really got right. Hopefully I'm wrong.

The only casting decision I felt was off was Amos, but I've since come around on him. He just didn't have much to do in the first episode and a half.

Miller is spot-on though. I always pictured him as Tom Waits, and that seems to be exactly who Thomas Jane is channeling.

I watched the first 3 episodes last night and enjoyed it.

I would have liked the sequence on the Donnager to have been longer, it felt more fleshed out in the books. Also, I love the flight suits and armor for the MCRN.

Love this show. Loved the books, so I was a bit weary when I first heard the announcement. Especially with it being on SyFy (at the time of the announcement they were still in their WWE/Sharknado phase). But after the first episode, I was hooked. My first impression of the actors were that they were a bit young, Amos being the worst offender. However, the actor has done a really good job with the character in the first 4 episodes. I like the actor playing Miller as well. Now all we need is for Bobbie to make here entrance...which I don't think will be until next season, though.

I always pictured Miller being much older. And as mentioned above, I found the Amos casting odd as well. Neither has impacted my enjoyment of the series thus far, though.

My daughter, the MCRN Engineer. So proud. 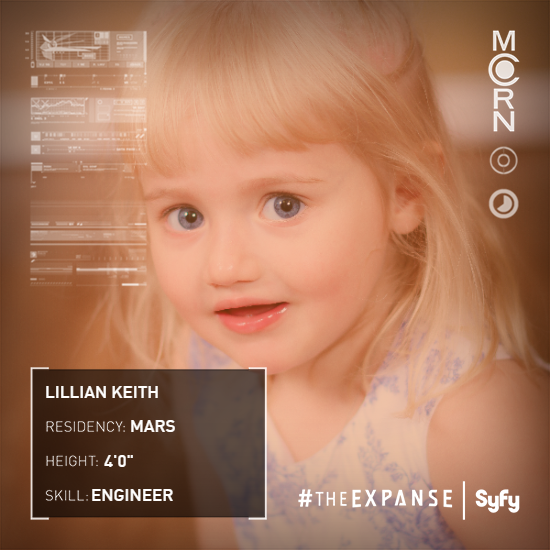 I may be in a little deep on this.

I read through and enjoyed the books well enough. I haven't gotten around to any episode after 1 but the first was a little bit halty.

We'll see how the casting turns out; Holden is not at all as I would have imagined him.

Holden: kind of bland overall, but Holden has always been pretty much the least interesting part of the series. If anything, I think the actor's a slight improvement over the guy in the book. Also had me checking to see if he was related to Paul Blackthorne.

Alex: A little bit uneven acting, but when he's on, he's perfect. I know, I know, Alex in the novel is middle-aged, paunchy, has a bald spot. Things were going to get sexier on tv, and I think they've got the spirit of him dead on.

Naomi: awesome. The British accent threw me at first, but it's a quick adjustment. She's a good actress and is perfect for the role.

Amos: Yeah, something's off about Amos in this show. I think it's because Amos in the books is always confident, and doesn't dwell very much on what happened at any point in the near to distant past. That gave him a confidence that show-Amos doesn't seem to have. Amos should make you slightly nervous, and should react to violence as if it were something he was expecting the whole time. I don't really recognize the guy in the show. Then again, book-Amos took a little while to get going as well.

Fred: Completely not what I was expecting. I had pictured an older, super-skinny, sharp angled gentleman. Sort of like Lance Reddick with gray hair. This Fred looks and acts more like a forklift driver. There's nothing wrong with his portrayal, it's just not how I'd pictured him.

Just saw the first episode last night. I have not read the books in a year or so, so the details have faded, and I'm very pleased with the story elements they have included. This is space opera done right.

I just finished rereading the series, in part because of the show, but also because it's become one of my favorite series.

I like the show a lot too, but there are things I wish they hadn't changed. Think the biggest one so far was all the time they spent fixing the antenna on the Knight. I don't think that served the story any better than the events in the book.

I agree that Amos seems too young, though the actor is growing on me.

And I like the actress that plays Naomi, but her hair is too short; her character's biggest quirk is letting her hair fall in front of her eyes whenever she wants to "hide" from situations or emotions or whatever, and that hairstyle isn't going to enable that. Small thing but it's a quirk that I found endearing in the books.

Haven't read the books, but this show is good.

Also not a book reader, but I caught the first two episodes yesterday. Definitely has my interest.

Really enjoyed the first 4 eps and I didn't think I would. It is hard SCIENCE fiction and it works really well. It kind of proves a point I've made for years which is that compelling fiction and real science are not mutually exclusive. It's solidly on my must watch list now. Can't wait for more.

I've only read the first book (and really liked it) but this is on my radar. Will be checking it out this week.