I've recently gotten hooked on playing Diplomacy online at BackStabber. It's wholly online with various options around timing and communication's restrictions. I usually play Daily and have tended towards Gunboat (No communication allowed) just to learn the mechanics of the game.

If anyone is interested in playing, learning or even just comparing notes around the game, please chime in.

I would play a game of diplomacy, but only with a group of other Goodjers. My normal rule is only with people I know, but in this community, I could comfortably relax that.

Also joining the conversation here because I'm interested in principle but absolutely can't commit to a scheduled turn based game right now. This is why I stopped playing Planets.

Oh heck yes! I love Diplomacy!!! My local game group has a couple of people who won't play it sadly.

I still have my old PlayDiplomacy.com account somewhere. We can play over there really easily.

Good to see a few responses. Granted, this game has a reputation for being very contentious, even among friends. Hopefully, this is a good environment for learning and experimenting with it. The board game itself requires a commitment of several people for several hours. With a game that includes player elimination, this is a very high bar to meet outside of conventions. PBEM style (Daily or Weekly) online play suits the 'casual' player and I kind of enjoy getting that 2pm email on my phone with a proposition.

I totally recognize this. I guess I'm thinking more in terms of learning the ropes around how the units move and opening strategies without being distracted by 'advice' from players inside the game who understandably have ulterior motives. Your poker analogy is spot on though and the real meat (and thrill) of this game is in the communications between the moves and the inevitable betrayals.

I'm open to however people want to play and learn. I figure this would be a safe(r) environment for learning a simple yet intimidating game. The Backstabbr site I linked allows for private invite-only games, although I we might need to open it up to the public if we can't get a quorum. I haven't played anywhere else but am open to whatever the other GWJers want to try.

Set up a board and play through the top 3 openings for each nation, play the moves off against each other, see how they interact and how the board looks at Fall 1901 with various combinations. Take an afternoon. That will set you up perfectly.

I'd be interested. i used to play a bit and it got rather intense. I'll second what maq said about communication, you really aren't playing unless you are talking to people.

Here you go, this used to be my light reading when i was playing^^

Good to see some additional interest.

Looks like we might be a bit short of a quorum for now but let's see if we can get a GWJ-only game going. If having a longer turn cadence (weekly instead of daily) might help those with time crunches, I think we can accomodate.

I started an account at PlayDiplomacy in order to support a password protected game. Backstabbr supports Private games but you'd have to provide an IRL email to the game creator. PlayDiplomacy also looks like it's a more mature site with a busier community and shinier interface.

Backstabbr does support a Sandbox option for those that don't own a copy of the game and might like to run through various board scenarios. PlayDiplomacy has an 'Order Solver' but it looks a little less friendly to me.

Here's how I see the game setup (I believe this is the default settings but am open to any suggestions):

Please do offer any feedback on the setup or interest either here or in PM. (Even an 'I'm In' to this thread will work) I'll also add useful links to the OP as they're added.

I can ask on the Idle Thumbs forums if you like? THere was a little talk a while back about playing a game but there wasn't enough people to make it work.

I'm totally in. I love PBEM Diplomacy. The couple of games that I've played had 2 or 3 day turn cycles, and then 1 day for builds/retreats. Worked really well - enough time to plan nefarious things, but not too drawn out.

EDIT: Communication was unfettered, which I think is appropriate.

When playing with friends or strangers just be ready for the sudden but inevitable betrayal.

I count 5 interested GWJers. Looks like PlayDiplomacy offers options for 5-6 player games (Italy or Italy/Germany will be idle).

I'm open to inviting people from outside the forums but we have at least one member here indicate they wanted a GWJ-only game. I can either create a 5-player game and post the info here or create a full game and see if we can fill the empty slots with invitations.

I can also extend the turn cadence to 2-days and leave communication completely open (Looks like that's the default option anyway without a Premium account).

Thanks again for the interest. Looking forward to getting under way!

I love how the dynamics change in PBEM. In face to face, Germany is one of the harder countries to win with, in PBEM it's one of the easiest.

I didn't see any additional feedback on the number of players so I've created a 5-player game on PlayDiplomacy.com. Game info as follows:

I only created a 5-player game since that was the total number of players in the thread who were interested. If anyone would rather play a full game, I can either create an additional game or recreate this one.

Let me know if there are any questions. Thanks for joining!

I've never not played a 7 game. Does it break it somehow?

I've never not played a 7 game. Does it break it somehow?

I've never played one either. But it will change the basic flow since Italy and Austria will sit in civil disorder until conquered. This may give certain powers unexpected advantages.

If the group would rather do a standard 7-player game and wait on a full quorum, I can create one.

Back in high school we could rarely get 7 people together to play it so we mostly played with 6. Italy just sits out. 5 is a bit less balanced.

I think opening up a game to non-GWJ players may be necessary but want to accommodate those that would like to keep it within this forum. Given the choice, to me playing is far superior to not playing.

I've gone ahead and created a second game open to all players. Details are below:

Hi guys! Sorry I haven't applied to the playdiplo games! Work has really picked up for me until the end of the year and I don't have the time necessary to enjoy a pbforum game.

Hi guys! Sorry I haven't applied to the playdiplo games! Work has really picked up for me until the end of the year and I don't have the time necessary to enjoy a pbforum game.

No worries. I'm sure we'd expected this would be a challenging one to pull off but I'm still glad to see some interest. If we get a regular game or two going then I'm sure we'll catch you next time around.

I've kept the games up but it doesn't look like there are many takers. It doesn't cost anything to leave them up so maybe they'll fill up at some future date.

Thanks to all who chimed in and offered suggestions. Hopefully, we'll get a game going one of these days.

I've signed up for the game, looking forward to playing with y'all.

Diplomats, I've just discovered an absolutely brilliant youtube series covering the Top Board (the final championship match) at the World Diplomacy Championships last year. The series features conversations of the world powers as they transpire. Watching these experts maneuver and negotiate in real-time is incredibly eye-opening.

The series really hits its stride in episode 3 when he adds subtitles to the player conversations. It's a brilliant playthrough that I binged watched hardcore, including the big interview with all the players 6 months after the event.

The first video covers the game setup and has minor winner spoilers:

Some of the best gaming memories of my life come from Diplomacy.

I would totally be up for a game if other people were interested. Thinking something along the lines of a 72hr cycle so as not to pressure replies should life get in the way. Thoughts/interest?

I'm interested, since I've never been able to dedicate the time for a full game of Diplomacy. I'm also a bit busy, though, so it depends on when we'd start!

I'm also intrigued. I've heard of, but never played diplomacy. What kind of a time commitment would it be for each 72 hrs?

It would require you writing letters to the other players with whom you are coordinating. I'd say, for every 72 hours, you'll probably spend 1-2 hours reading/writing letters to your opponents. That does not however include the 20 hours you'll spend parsing your opponent's words trying to glean their actual plans and motivations.

Arise thread! It is time for Diplomats with Jobs: Quarantine Edition!

Fellow Gamers with Jobs, come join in on the backstabbing fun! I'll be hosting a new-player friendly game of Diplomacy for the coming weeks. At 48 hours for orders and 24 hours to build and retreat, the game will have a measured pace with plenty of time for correspondence and intrigue!

What is Diplomacy you might be asking? Good question!

Diplomacy is a wargame based heavily on player negotiation that has no random elements. The game is incredibly fun, deceptively deep, and surprisingly stressful.

Set in Europe in the years leading to the Great War, Diplomacy is played by two to seven players, each controlling the armed forces of a major European power (or, with fewer players, multiple powers). Each player aims to move his or her few starting units and defeat those of others to win possession of a majority of strategic cities and provinces marked as "supply centers" on the map; these supply centers allow players who control them to produce more units. Following each round of player negotiations, each player can issue attack and support orders, which are then executed during the movement phase. A player takes control of a province when the number of provinces that are given orders to support the attacking province exceeds the number of provinces given orders to support the defending province. 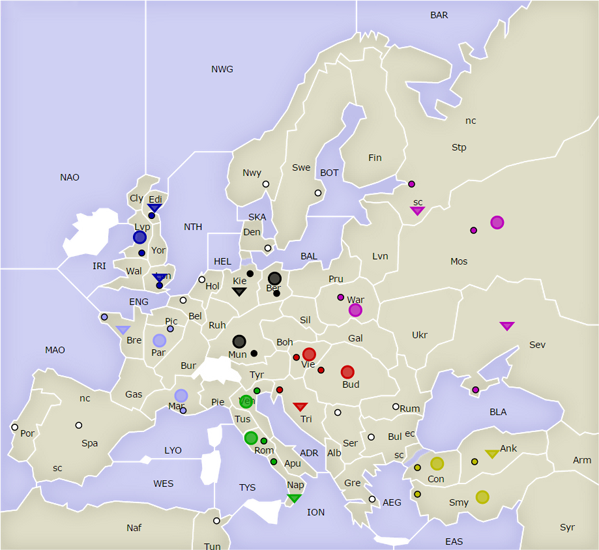 Depending on the preference and number of our players, we'll use either Backstabbr or PlayDiplomacy. I am comfortable with both, but for new players in a fun setting, I'm hoping to use Backstabbr. The interface is a bit easier to understand, and the custom sandbox gives you the opportunity to see how different moves will resolve.

Either way, as moderator to the game, I'll be available to answer any questions you may have along the way. With the player's consent, I'll be writing up a yearly or bi-yearly AARs for the forums with the headlines from the front.

Definitely in, thanks for the offer Kronen!