God I hate the Penguins. I don't know if it hurts less that they beat the Capitals, so at least we lost to the eventual champs, but... UGGGGGGGGGH.

Tonight I hope to eat a delicious meal for dinner and then afterwards for dessert dine on the salty tears of Sharks fans.

I will enjoy Game of Thrones tonight, drinking from a chalice filled to the brim with Sharks tears!

2 measly shots on goal in the 3rd period with their Cup lives on the line.

Congrats to the Pens and to the Phil! 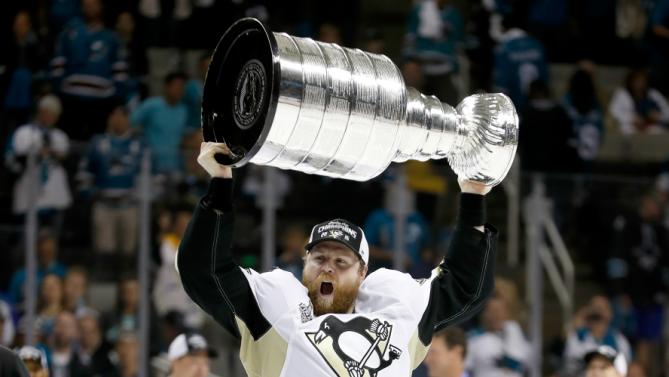 Was a good run for the Sharks. Looking forward to next year.

Congrats to the Pens. Glad to see Kessel get one.

Calgary's new coach is Glen Gulutzan, best known for his work as player/assistant-coach of the Taylor Cup champion Fresno Falcons, for which he was immortalized in bobblehead form:

What a shambolic organization:

#Habs MB: "(Shaw) is a proven winner. I know he can help our room. I don't know exactly what he's going to cost us, we had to make some room

Plus they gave up value to downgrade from Eller to Shaw, and likely pay more in salary for the privilege of doing so.

Of course, the Habs' issues are ironically a problem with leadership. They need new head coaches (AHL and NHL), a new General Manager, and a new President.

can't believe Logan Brown slid to 11th... so happy we could grab him

Oh that's full on ridiculous. Habs traded Subban for Weber. One for one trade.

Wow. Weber is good, but Subban is just way better.

And according to Bob McKenzie, Stamkos has decided to return to Tampa Bay. That's a decision that I can make sense of, at least.

Subban for Weber.
Hall for Larrson.

The Oilers, the Habs and the Canucks are all trying to out dumb each other.

edit: the Habs should have traded Subban for Hall.

I thought Marc Bergevin was a bad GM, but I never thought he would outdo the Patrick Roy trade.

Edmonton and Montreal should have engineered a three-way trade with New Jersey. Without adding anything they both would have been better off.

Oh that's full on ridiculous. Habs traded Subban for Weber. One for one trade.

Wow. Weber is good, but Subban is just way better.

And this Bruins fan! Chiarelli being in charge in Edmonton is just the icing on the cake.

Hall for Subban would have made a lot more sense for both teams.

Kinda wouldn't of minded Toronto landing Stamkos on some albatross of a contract because he could of easily exploded and become a huge liability.

The Subban trade? Whats the devils advocate angle on this? I don't want to bring up up that his character (race) doesn't fit but its such a bad trade some people are actually going to think this. Did he beat up Price? Did the GMs wife seduce him? like wtf.

The Subban trade? Whats the devils advocate angle on this? I don't want to bring up up that his character (race) doesn't fit but its such a bad trade some people are actually going to think this. Did he beat up Price? Did the GMs wife seduce him? like wtf.

Bergevin arrived, didn't recognize that Subban at 22 was already as good as Shea Weber, and didn't get the ill-concieved bridge contract done until the season had started.

Then Subban's in Therrien's hands and Therrien spends over a month playing him as a 3rd-pairing defenseman with Bouillion, and didn't use him at all on the penalty kill (which are high-leverage minutes and he's pretty damn good there too). Therrien's system really reigns in Subban's ability and limit his rushing and puck-handling more than he should.

So Subban wins the Norris on the basis of ridiculous points totals to go with decent play (in easier minutes), plays well the next year as well (while still being underused), and his contract is up. Now that Bergevin's bridge gamble collapsed it's time to pay the piper but it's like pulling teeth, Subban goes to an arbitration hearing that is apparently quite contentious, and a long-term contract is handed out only after the owner intervenes.

Subban keeps playing well but under the weight of terrible coaching the Habs only get results when they have a superhuman goaltender, that goaltender gets injured this year, the GM doesn't even bring in a goaltender better than replacement-level to compensate, and the team collapses. Subban makes some comments along the lines as he thought the team could have used more help.

And Subban dares to have personality, to show exuberance on the ice, to have fun playing the game, to enjoy being the centre of attention. The antithesis of Bergevin and Therrien's old-school CHaracter obsession (except for their penchant for wearing awful, loud suits).

His no-trade/movement clause kicks in July 1st so like Jeff Carter in Philly (or was it Mike Richards?) this is the last chance to trade him anywhere.

Oh, and Subban's black too.

So Bergevin's press conference, for all he tried to focus on how awesome Weber is, ignored the elephant in the room, which is that you don't trade a franchise player like Subban unless there is a damn good reason. In this case, at absolute best, you could argue that you traded Subban for an equivalently skilled but older player who is going to get a lot worse a lot faster. So what reason could you possibly have to do that?

Either Subban was a A) Hated by coaches and management because he didn't fit in with the system they wanted to implement, or B) Was a cancer in the locker room.

A lot of the media I've been consuming today (in my final day of allowing myself to care about this nonsense sport) has been pointing towards B), pointing to how Subban was miffed he wasn't voted as captain, not nominated for the Community Service award or whatever. If that's true, I can see why you might want to trade him, but if that's the case, I hate the sport even more, because I can't understand how someone whose personality and talent I love as much as Subban's would be hated so much in the locker room. If hockey players can't deal with teammates who dare to exhibit a bunch of personality, then I have no problem ignoring them as much as possible, and why not the team and the whole sport while I'm at it.

And if the trade was driven by option A), then the entire team is so mismanaged and dysfunctional that they don't deserve paying customers.

Of course, the evidence over the past few years likely suggests a little from column A), a little from column B). Regardless, the fact that the habs have doubled-down on the "character > talent" trope this offseason just amplifies my disgust for that team. I realized today that if I didn't grow up cheering for them, I would absolutely hate them. So I'm done.

Been busy all night and just now getting a chance to post about the trade.

Let me sum up my feelings about it...

Nashville managed to trade Seth Jones and Shea Weber for Ryan Johansen and PK Subban. That is an outstanding return for them. Terrible for the Canadiens and pretty good for the Blue Jackets.

Really glad the Canucks GM isn't the worst in the league for at least a season. His body of work is worst than Chiarelli and Bergevin but hasn't made a singular trade that bad (Kesler trade was horrible but at least got something of value in that...too bad the only player left on the roster from that deal is Sbisa).

the weirdest thing about the trade is that even though Nashville is the obvious winner in the short and medium term... that cap recapture penalty clause is a huge ticking time bomb.

what are the odds that he doesn't retire before he turns 40?

James Mirtle has a nice summary of yesterday: Mismanagement and a lack of vision plague Canada’s NHL teams

Choice quote:
"Why this is happening isn’t complicated, either. It’s not the pressure of the market, the media, the league conspiring against [Canadian NHL teams] or the fact that players don’t want to play here. (Hall and Subban certainly did.)

The Canadian NHL teams have been, by and large, horribly mismanaged. They are, generally speaking, not progressive organizations, not adept at change and not finding ways to outmanoeuvre their competition. Most are well behind in areas such as analytics."

Canucks used to be league leading in analytics as well. They had a private contract with the Coyotes new GM before then. New regime didn't see the value and every other team stepped in. So frustrating.

Don't know if that's a good thing, or not. I'm hoping GMBM does another great "....and we have Oshie now, apparently" trade.

As a 'Fire Bergevin'/'Bergevin isn't a good GM' hipster the Subban trade and all the press and quotes from Habs management since the trade have been great. This is my favourite:

A source told Sportsnet that Matt Pfeffer, who was hired as an analytics consultant at the beginning of the 2015-16 season, made an impassioned and elaborate presentation to management to dissuade them from following through on this trade.

Ignoring Pfeffer’s advice only served to reinforce the notion that Bergevin was following different criteria in his evaluation of both players, said the source, who also suggested Pfeffer’s vehemence on the matter might have ultimately cost him the job (he was told on Wednesday that his contract won’t be renewed). The Canadiens would not comment on why they aren’t renewing his contract, but they did say that they are looking into other analytics solutions.

..other analytics solutions that support whatever decisions they've made previously

Patrick Roy quits as Colorado Avalanche coach. Who here thought he was going to fire himself this summer? Or easier question maybe, how many predicted Roy was going to leave the team on bad terms?

Sucks for the Avalanche, not a whole lot of options to fill the gap this time of year.

Seems like there was a bit of a power struggle in Colorado and given how the Barrie contract worked out I guess Roy lost.

Good news if you're a Colorado fan. Roy's an abysmal coach so another roll of the dice in the coaching market is better than sticking with what's known to be bad.