How accessible is this game? I'm a bit of a luddite when it comes to strategy games, but I'm intrigued with the setting.

The tutorial is .....ok, not great, but gives you the bare minimum. I'd say it's a little less accessible than yer modern-day XCOMs, but not by that much. It's certainly a lot more approachable than your average Paradox game....

I can play X-Com, but I bounced off of Total Warhammer 2.

I have it on XBOX Gamepass for PC but it keeps crashing.

Are the DLC must haves? I'd feel better about springing for the base game at 10 bucks on Steam.

Are the DLC must haves? I'd feel better about springing for the base game at 10 bucks on Steam.

Nope, vanilla game is great, DLC is very much optional.

Ok, I feel ok about a 10 spot. The little bit I played of the gamepass version had me interested.

Does this game freeze on quit for anyone else? It won't let me quit but stops everything. I can't end the process via task manager. The only thing that works is a full restart.

No, I have not seen that Maverickz. Maybe check the files in the Steam properties?

What should I be looking for? 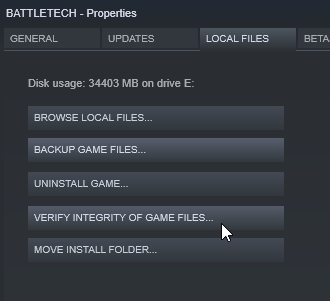 Hmm, apparently 4 files were not well, and were redownloaded. That seems to have fixed it.

I think I had that problem when I first bought it.

Glad it worked. (And props to merphle who actually got the info while I was working lol.)

Hey, I was working too. Technically.

I was on a set of back to back Teams calls...

I'd say go vanilla until you get about 30-50 hours in. If you are hooked on the stompy pew pew robot action, you can either keep going with the DLC or try a completely revamped game system through one of two major mods (Battletech Advanced or RogueTech).

Once you go RogueTech I daresay you won't go back to vanilla. It's got the ability to drop 8 mechs (double the base game), tons of new mechs and vehicles, revised AI, revised evasion mechanics (lighter tonnage is more feasible for far longer), a more complex electronic warfare system, exponentially more weapons and therefore more tactical combinations.

Fair warning though, it's much harder than vanilla because it can be horribly broken in balance. You can easily create 500+ damage per round monstrosities but so too can the AI. I had one mission (a double duel so 2 v 2) where my Assault mechs with max skill pilots were cored in single alpha strikes. The culprit was a tricked out Atlas that vomited high damage rockets with stupendous accuracy and missile clustering. I loaded the pre-mission save slot and ran away from that one.

Ef me, why is this game so hard?
Am I the only one who feels like it shows you a middling of success before punching you in the nuts?

Pilots dying and near wipes on the second mission? Missing on punching a tank?

I just don't get it. I got the season pass on sales for $22 at fanatical. I started a new career after watching hours of Baradul play Roguetech. So I know what some of the advanced tactics are. But its the same result as at launch with nut punching galore.

Ef me, why is this game so hard?
Am I the only one who feels like it shows you a middling of success before punching you in the nuts?

Pilots dying and near wipes on the second mission? Missing on punching a tank?

I just don't get it. I got the season pass on sales for $22 at fanatical. I started a new career after watching hours of Baradul play Roguetech. So I know what some of the advanced tactics are. But its the same result as at launch with nut punching galore.

It can be frustrating, particularly early when you’ve got a blackjack and three mechs you have scrapped together that don’t really fit too well tactically. You’ll likely chew through a couple pilots early before you get them experienced up and you’ll be paying a ton in repair costs each and every fight. I’m assuming you’re doing a career mode - I stuck to doing every single half-star and some of the easier full star scenarios early, building up a good number of terrible mechs that I could grind through. Once I got a couple of decent mediums with punch, namely a hunchback or two, and a couple of wolverines, I started to really shine and begin rolling through the flashpoint missions that netted me some really nice mechs and money. I also became really
Good friends with the pirates and used that to get the super sweet black market equipment and mechs. Once you get your first bull shark or highlander it’s all but over for anything not top tier.

Yes. Then turn it back up once you've got your feet under you.

Baradul makes it look effortless in how he builds Inferno LRM boats and shuts down every threat on the map but personally I could never approach his level of skill and I doubt most players will, either. It's also highly dependent on loot rolls - it's not easy to get the right ammo and weapon + mech loadout to suit that playstyle.

That said, this is what I suggest if you want to get back into it:

1. Save scum. It's very easy to make a mis-click and stuff things up by accident. No point regretting it in an Ironman playthrough unless that's your cup of tea.

2. Make your starting conditions easier. Who cares if it lowers the score of your career - it's a single player game anyway.

3. Don't install Roguetech unless you are willing to suffer. It adds a lot of content, much of which is ridiculously imbalanced. E.g. light mechs with ECM - they're almost impossible to kill low tier (<20% to-hit chance and it's even worse in night-time engagements), but they'll come armed to the teeth with Star League weapons that deliver a one-sided beatdown unless you get a lucky roll or two and neutralise the threat. E.g.2 fighting the clans and their superheavy mechs and they're fielding 4-5 lances of Heavy-Assault mechs when you are scraping the barrel with a few looted heavies/Assaults which aren't even optimised.

4. If you do install Roguetech, don't be afraid to keep restarting new games until you get a starter lineup that includes two or more decent mechs. For example, one commander setting gives you a guaranteed Bushwacker - but it can be a random one that is jammed with Star League tech or a more humble model. Similarly, you can get a good roll and some light mechs can match or exceed medium mechs. Or even vehicles (such as the Ferret which comes with a snubnose PPC and a ton of MGs which absolutely shred anything from the rear).

5. If you do install Roguetech, and want to try Baradul's missile boat strategies, have a look at the Thunder ammo - it lays mines that can leg enemy mechs pretty easily at the start of your career - it takes too long by the time you start encountering heavy mechs but it does help a lot at the start with the pesky light mechs which build high evasion pips.

Yeah I was lured by Baradul's laying mines and ground targeted inferno ammo. (and AMS that kills like 50 missiles per attack)

FWIW I am having a ton of fun with the MW5 Mechcommander mod.

I tried MW5 but found I sucked at targeting and twisting my torso to tank shots. That mod might be worth a look into!

I struggled with it too. More that your newb lancemates constantly bankrupt you.
This mod seems to even things out a bit as you are controlling 4 AI but they are much better at fighting.
Plus you have career mode so you can run half skull missions to your hearts content.

I'd say give it a try if you have the Heroes of the Inner Sphere expansion. (I'm pretty sure it requires it, at least to have career mode) I've put about 25+ hours in so far after only putting about 7.5 hours at launch.

You also get things like chem lasers, short burst lasers and rifles pretty early which helps you get unstuck if you find that missions just give you enough to pay for repairs. Cantina missions are great for breaking out of a rut too.

I have a lance full of heavies now and am about to acquire my first assault. (archer, grasshopper, thunderbolt, and 2x ppc catapult)

Yeah I only have it on Game Pass which you can't mod.

Instead, as my boy took over my Steam account I bought a fresh copy of Battletech on GOG (75% off) and installed Roguetech. Good old half to one star grinding for me!

I found MW5 to be a bit soul-less. I only got half-way through the game before I found better things to do. Meanwhile I've played through BattleTech three or four times.

Roguetech never ceases to provide entertainment: a new career and in my second half star mission, the AI launched a nuke and obliterated my Lance and a nearby allied Lance on turn 1! I'd never seen a nuke before but to spawn one so early was hilarious.