Apparently you can still buy them (for a crazy amount of money). The IP was sold off and eventually landed with a STEM company plus the old kits are still available on Amazon and Ebay.

I enjoyed Zoids as a kid, take em apart & put em back together.

WeiJiang was busted in China. He made lots of KO OS transformers. I'm shocked he was arrested considering he has been going on for years and his operation was large. Maybe he forgot to pay someone for protection.

Hasbro Haslab department is making 26 inch Sentinel that is very poseable and lights up. I'm considering buying it but have to check out how Haslab works. I think it is like kick stater which might mean I could give them $400 and end up with no Sentinel when they cut and run.

Probably buy a KO of Devastator called Gravity Diver which oddly enough has a KO. The KO and the KO of the KO both seem to be good quality. Maybe I'll just wait and see if there is a KO of the KO of the KO. Well it really isn't 1 for 1 KO. The figure or figures have a different style to them. I actually think they look much better than the G1 versions.

I watched a video review of Earthrise Arcee and canceled my preorder after watching it. Looks like the worse version of Arcee to date to me. Basically it is a robot with a car on her back. Granted many transformers are like that but this has to be one of the worse cases of it. The cyberverse version looks better.

Walmart is the worse for exclusive anything. Most of the stuff gets bought up by employees and put on ebay. It is a miracle if anything is up for more than a minute online and might not even hit the shelf in stores. It was funny watching a video on neca for the City Demon when they stated you could by it on Walmart. The thing was sold out before the video went live.

Hot Toys has some new Wonder Woman figures coming out. One seems to be exactly the same as the old version but with sculpted hair. The other one is her in her gold Hawkwoman KO armor which does look pretty good. I have to see the movie before considering it though. Might be another Phasma situation.

Recently bought a baby yoda, ko hardhead, and a ko blackarachnia. Also got a Black Window just for the stuff she came with. Not really digging the white outfit but that could change after the movie. Thinking about painting the body black.

Gamestop has Gear of Wars Storm Collectible figures for $20 and $25 dollars. Never played the game just picked one up because it looked cool and I needed some more black figures. Would be nice If I could get a cool black lady around the same scale. Got a lady from HACKS but she is a lot smaller like orginal gi joe size. Mythic Legends had some black females but I couldn't find any now.

Preordered a Arcee KO and picked up a real one but neither look like the original. Have Domino from the deadpool movie on preorder. She looks cool and will increase my black lady count.

Just got this lady also. Dollies for the win. 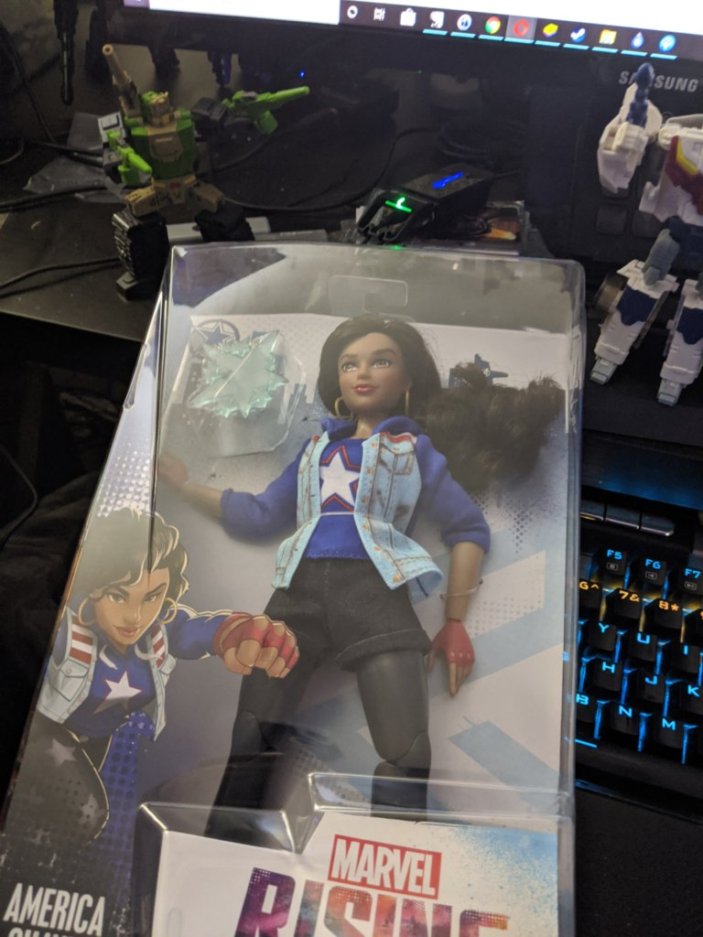 I went to Walmart today for something completely unrelated to toys, and yet I found myself in the Toy section... and ended up buying the first two Transformers I've bought in over 25 years. I am so excited! 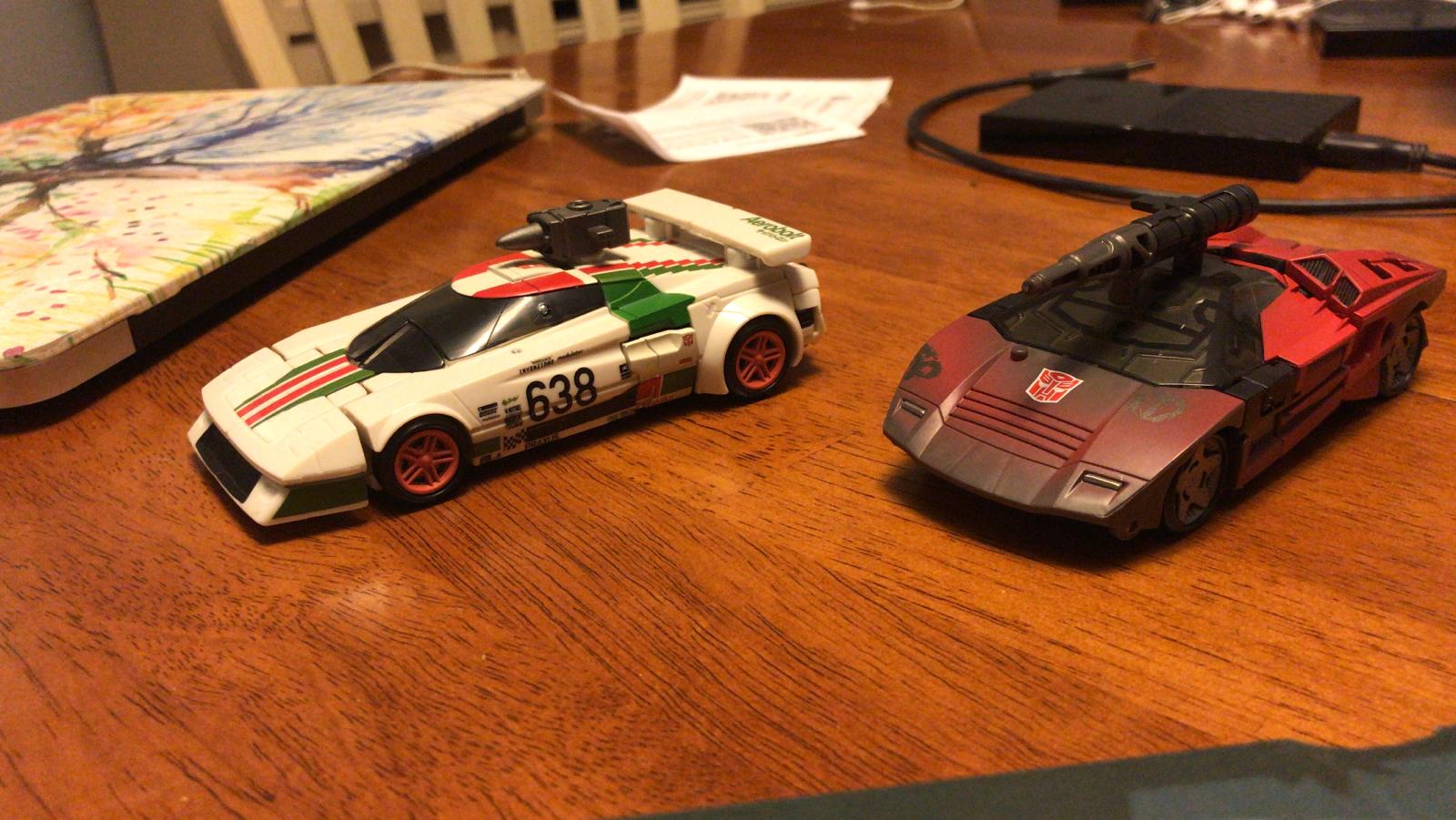 Looks like it is played liked the star wars game.

Looks like it is played liked the star wars game.

X-Wing you mean? Yeah there are similarities like the movement templates. In X-Wing you reveal the movements simultaneously and in this it's sequential, which makes it quite a bit different tactically.

Yeah I meant the x-wing game.

KO Devastator. This one is a KO of a KO. 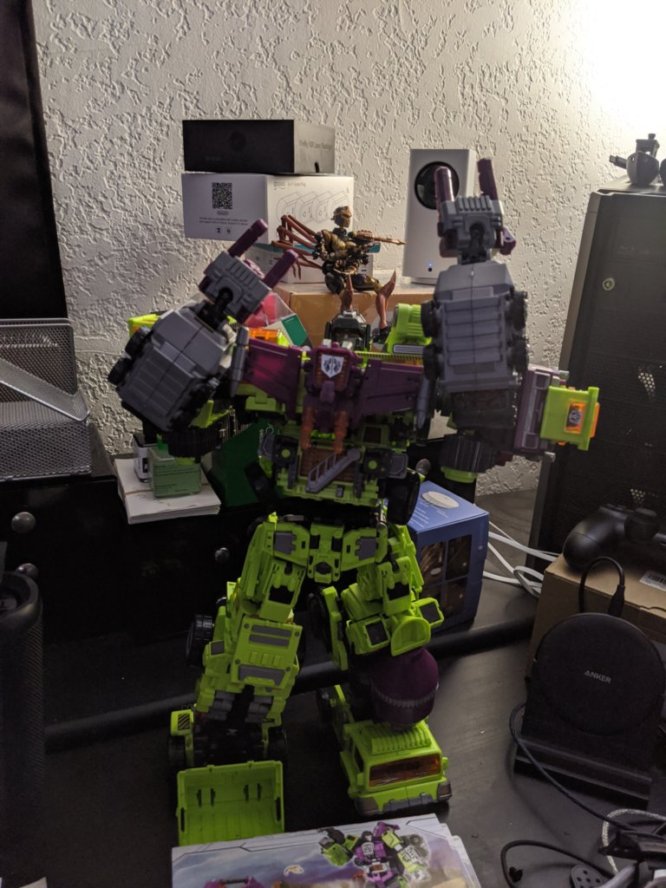 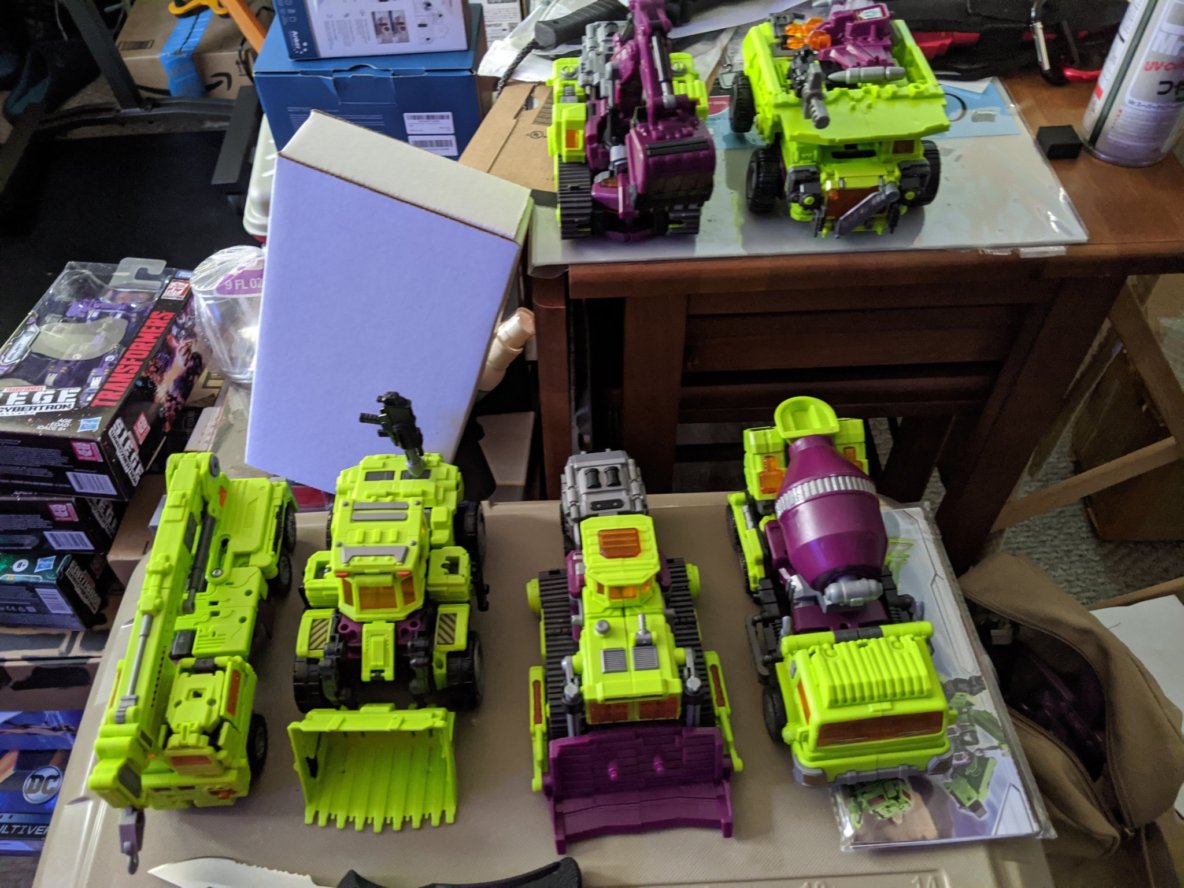 Easy transformation, cleat instructions, nice build. Head isn't G1 enough. Limbs don't lock in but it doesn't on the real one either.

Also, anyone know when holiday toys release? Been wondering about the new Transformers and Imaginext for the holiday season.

Had the original one when I was a kid, that looks amazing the detail on the new version.

Also, anyone know when holiday toys release? Been wondering about the new Transformers and Imaginext for the holiday season.

$100 on Amazon. I usually get KOs off of show.z and ami ami but they were sold out.

Not really an action figure, but the 1812 DRD went back into production for the Farscape 20th anniversary; so I was finally able to pick one up. 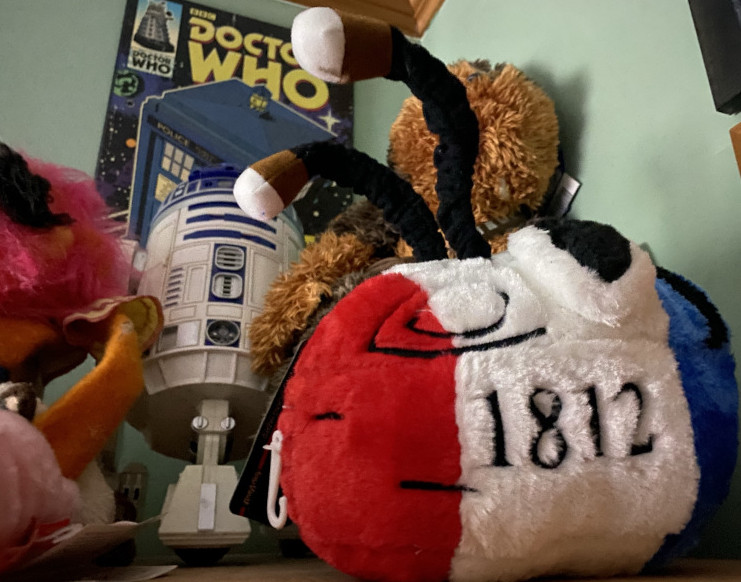 Anyone come across a gi joe confidential baroness target exclusive and is willing to sell it to me at cost + shipping let me know. It would be much better to sell it on ebay for insane prices though.

Got a Rin because I love Rin. 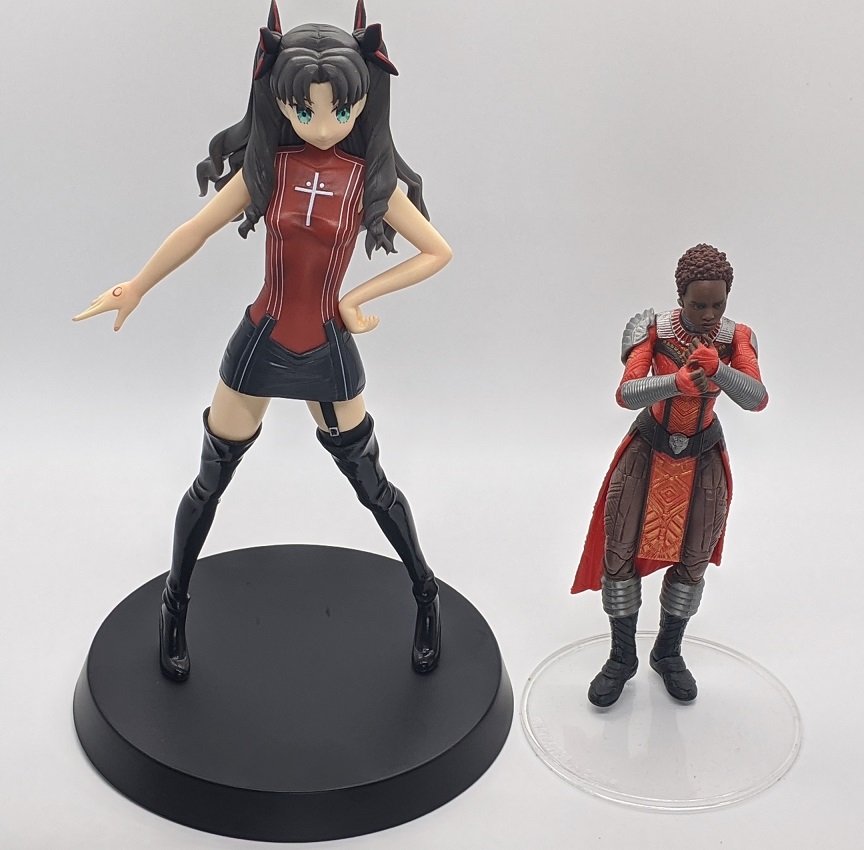 Here she is next to Nakia. They are dating on my shelf. Their love goes beyond size 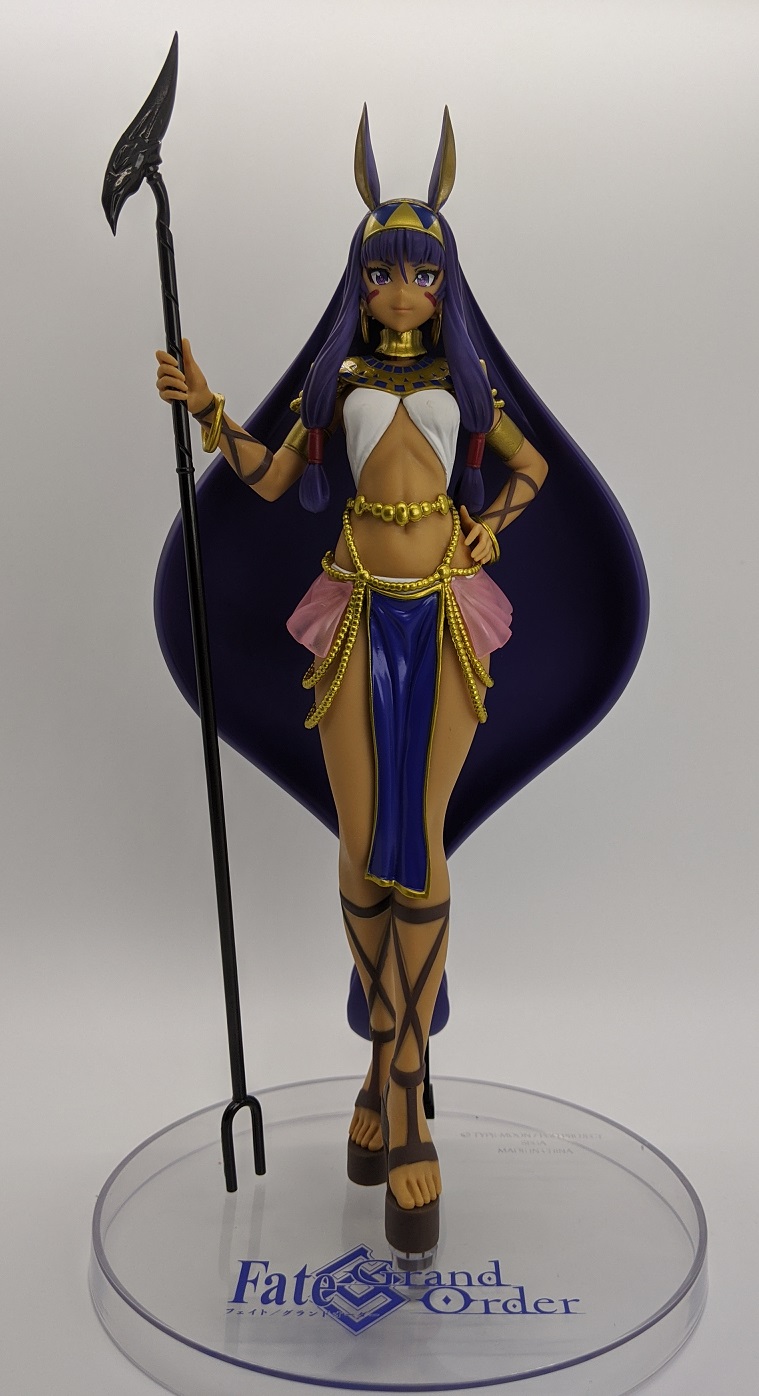 She is from the Fate series but I don't know who she is. I haven't watched the season or played a game with her in it yet. I'm way behind on my Fate stuff. I found the look interesting. The weakest part is the hair, its like a bland big chunk of plastic. No details or shading in the hair at all. I mean the back hair that goes to her feet. Doesn't look bad from a distant and the front.

Here is a back shot. 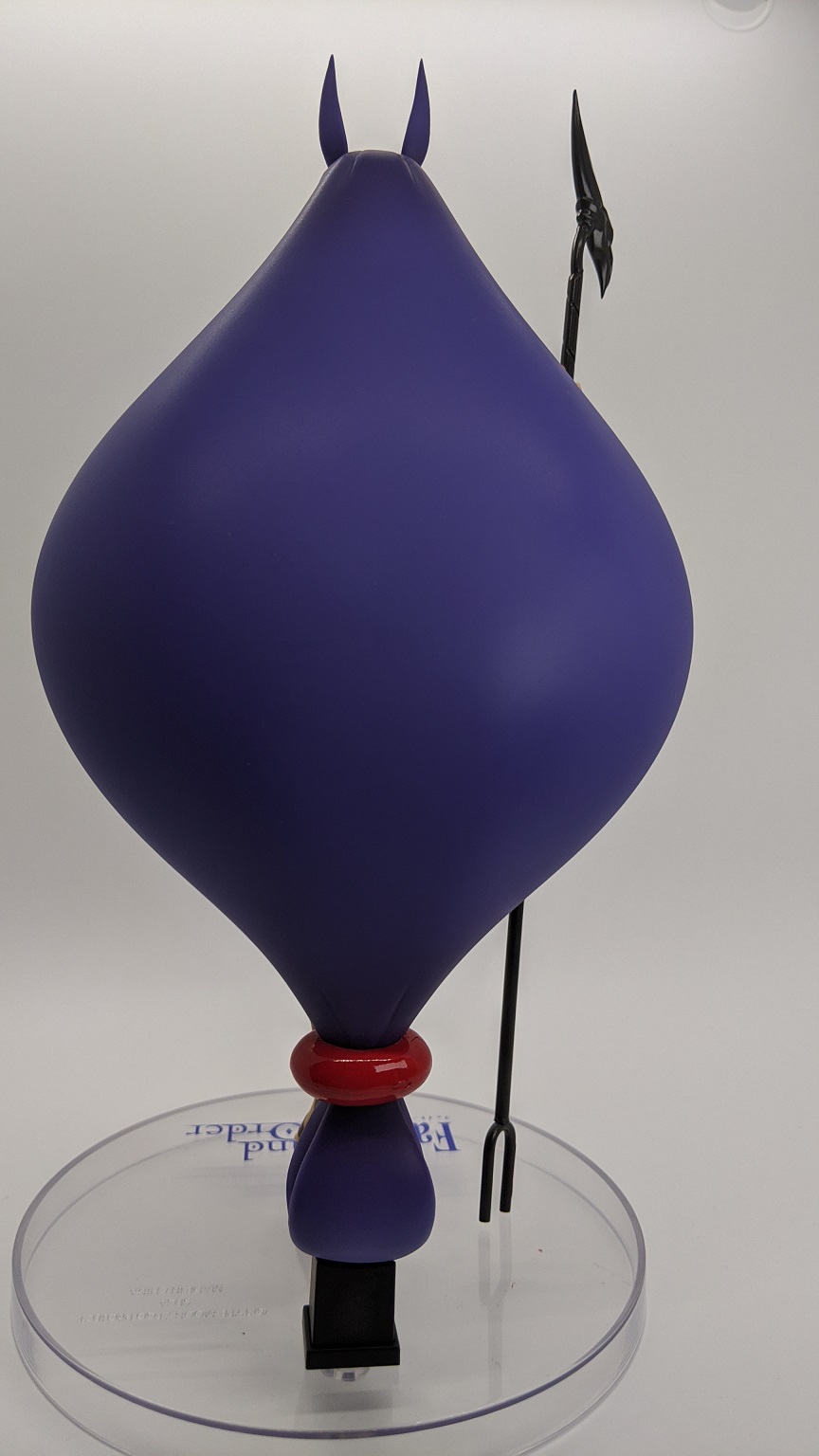 Oh yeah and she is also the brownish character I have seen on the show.

She sits among my favorites characters in the franchise 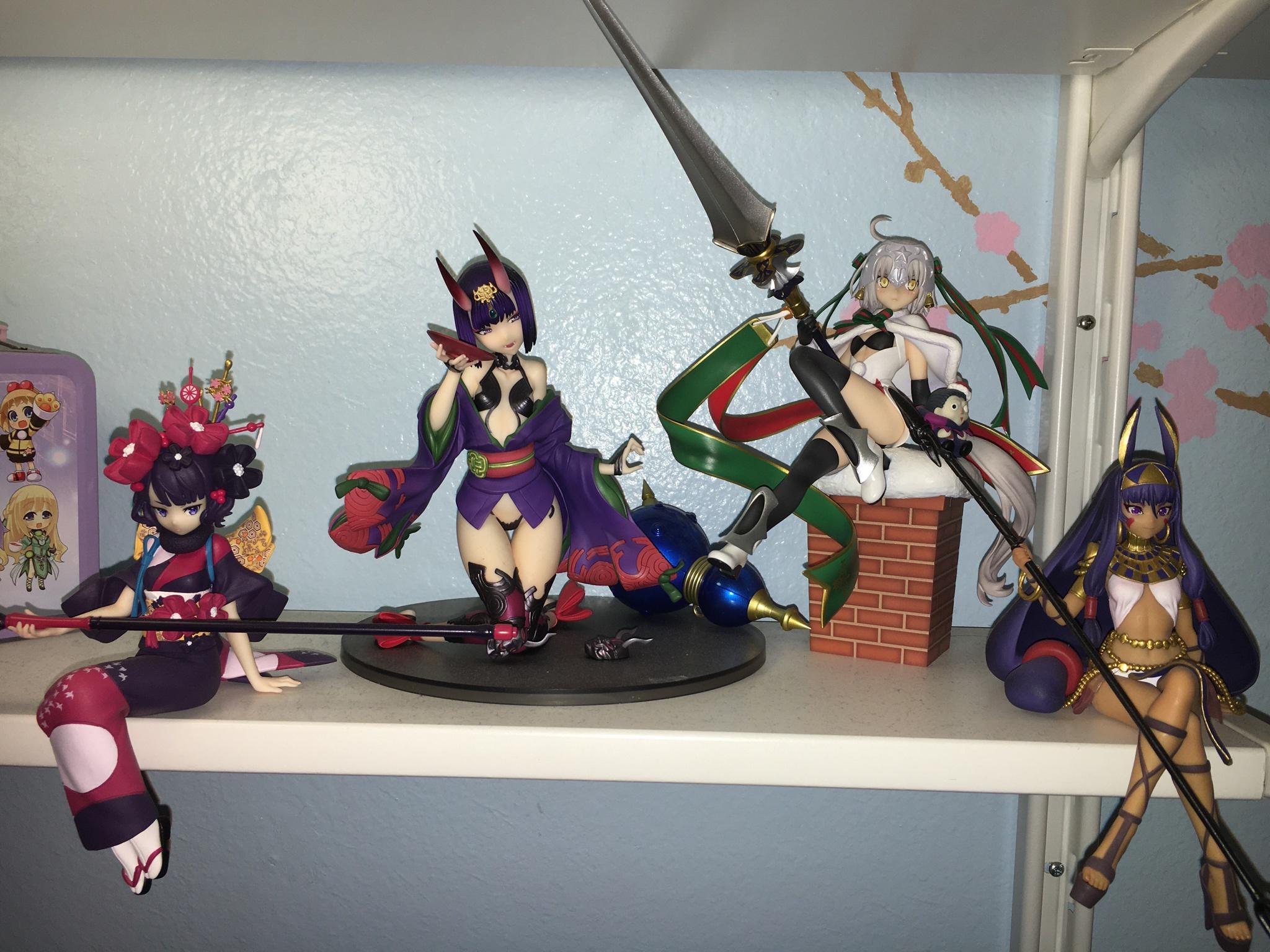 Those aren’t recent, however. Yesterday I received my fourth (large) Holo however, so she qualifies (the second to the right, holding the apples in her dress) 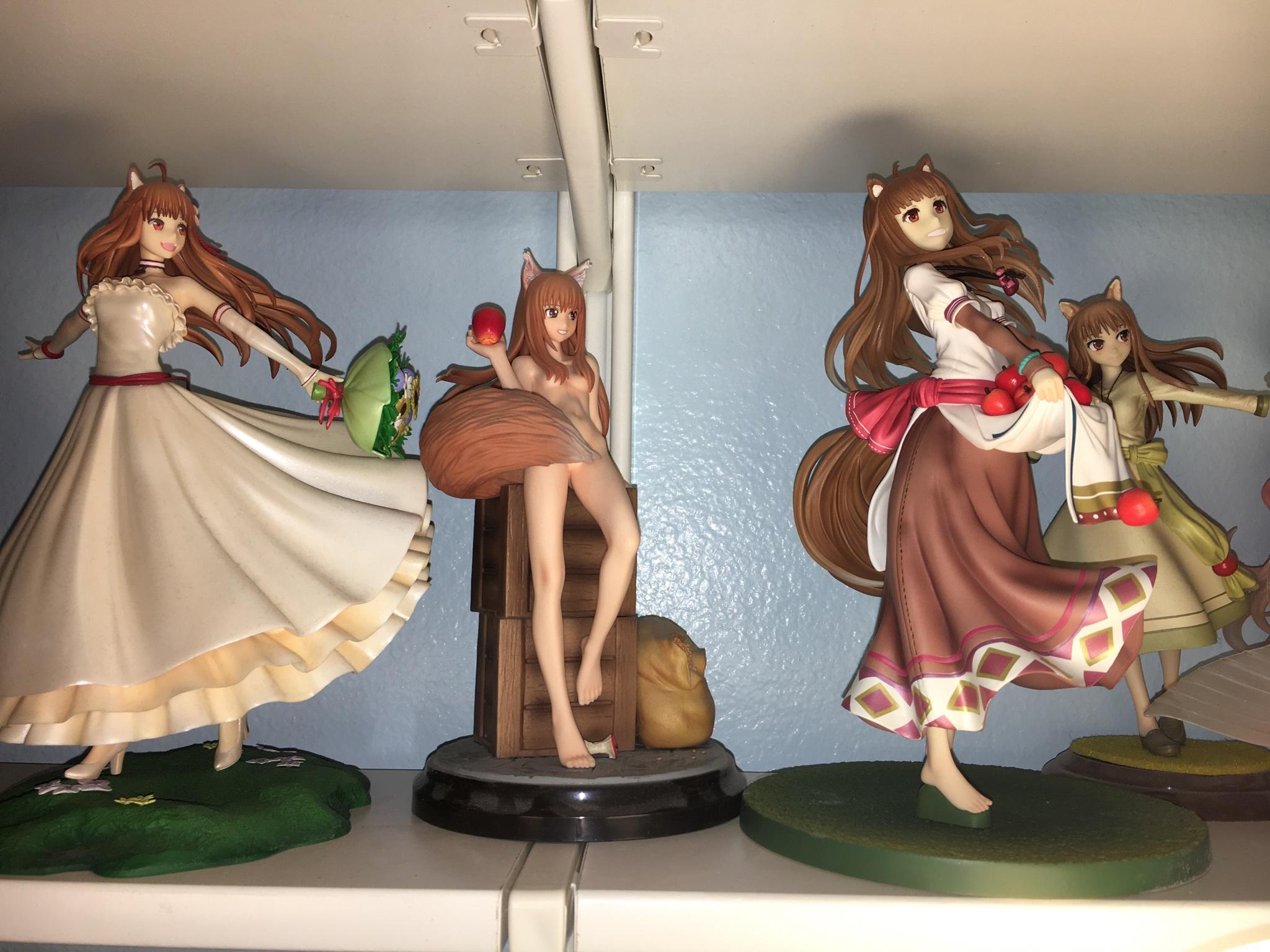 Looking for a good Darth Vader Fig to replace the one that was destroyed in the move. Anyone have any recommendations?

Looking for a good Darth Vader Fig to replace the one that was destroyed in the move. Anyone have any recommendations?

There is a new black series version coming out Oct 15. The one that came out this year is suppose to be good also. I have no idea why they are releasing two in the same year. Maybe he is the batman of star wars.

And here is my other favorite lady, Froppy. I have two more of these things on the way. 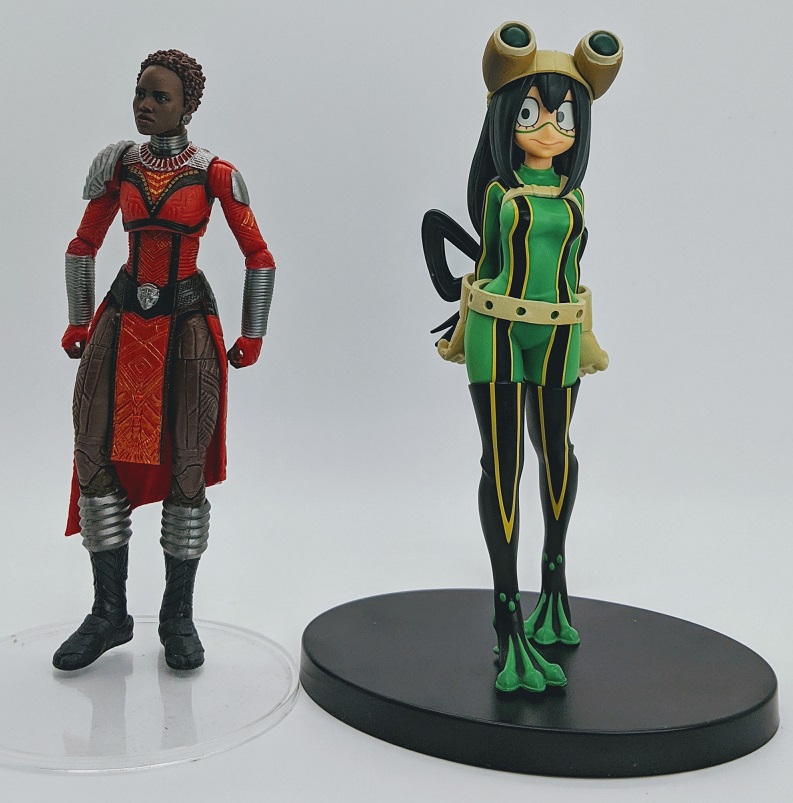 Not to many options are out for the frog girl. Most lady figures of MHA is of the floating girl. Then there are hundreds of deku. I get that he is the main character but give some love to the others.

I do like the figure but it was bit over priced for how small she is. Also would have like if she was shaped more like the cartoon. At least they didn't go super sexy with her. This is probably just a place holder until a better one comes out at a good price. There is one out now that I like but it is way over priced at over $150 and around the same size as this one. Just give me toon accurate one at around $30 is that to much to ask for? I hope I don't have to get another waifu.

Last of prize figures I got.

Here we have Rider and Rider of Black. I don't recall either of their actual names but Rider of Black is Best Boy and my favorite character on Fate. He is what got me buying these things. I was going to get the figma version but it cost a lot and I'm not really into figmas now. I don't think they are good for the price. Buying these figures were around the same price of buying one figma of him. So I opted to get four figures instead of one figma.

My new light box I have been using to take pictures in as of late. Best Boy is on top. 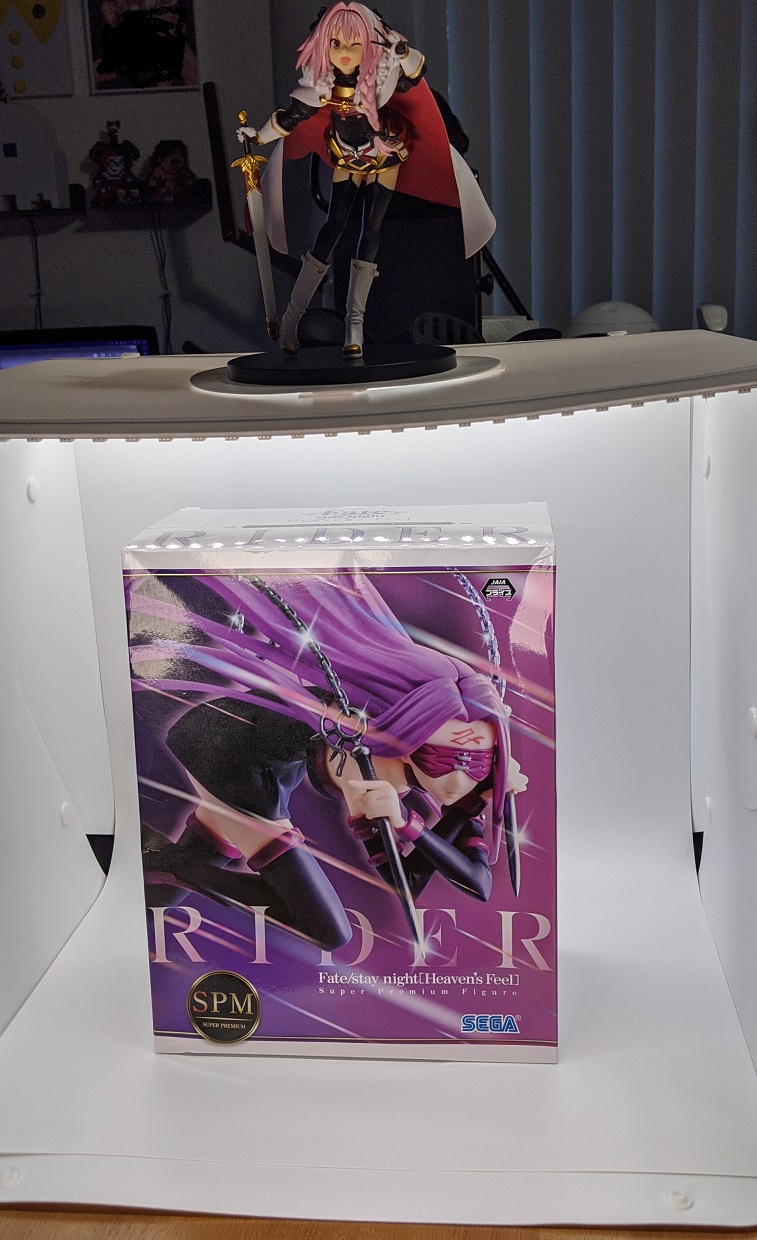 Here is a comparison shot. Rider takes up a lot of space with her pose and metal chains and hair flying all over the place. I love this way than I thought I would. She is bigger than the other figures yet around the same price. 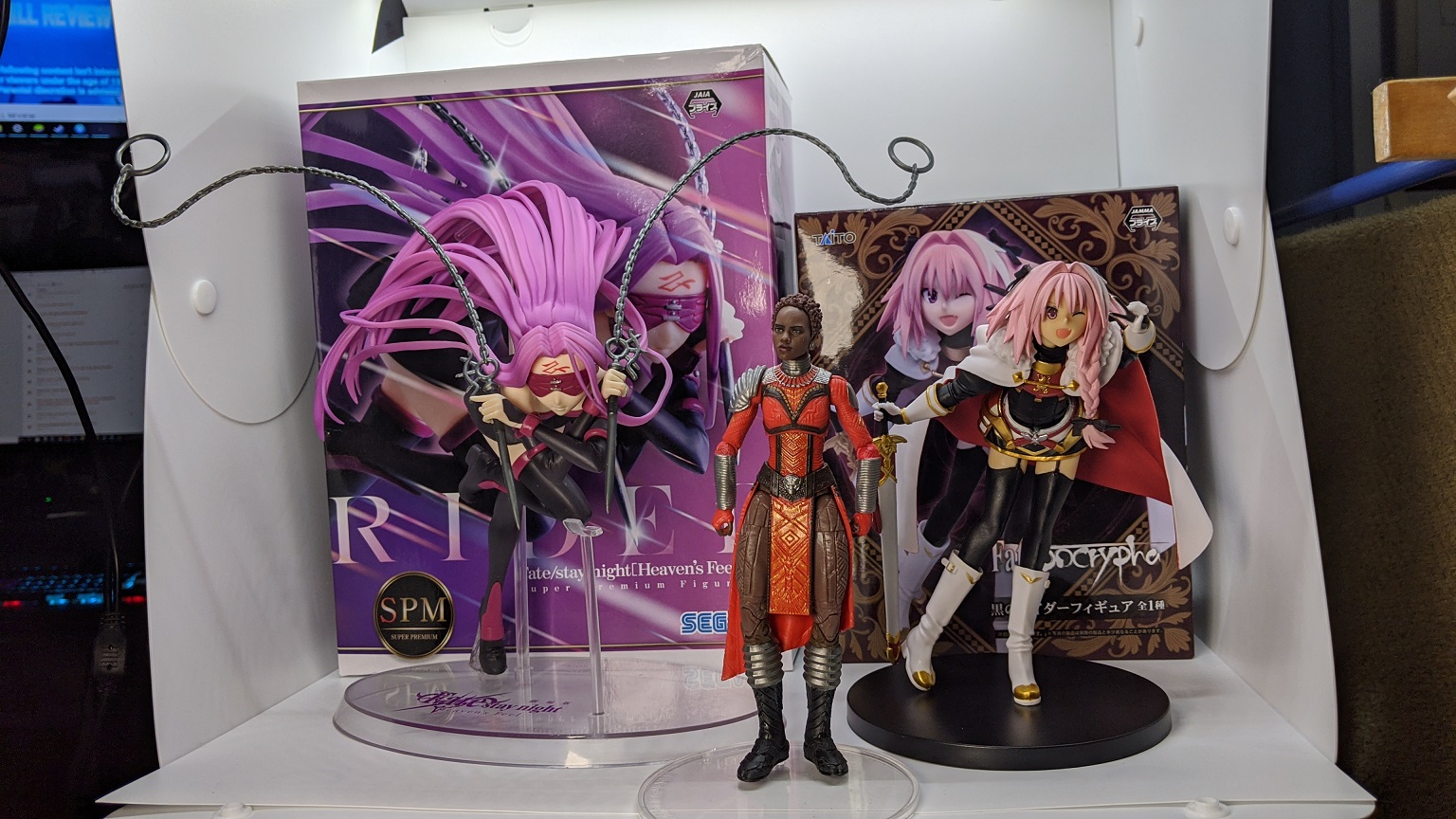 Close up of best boy, Rider of Black. 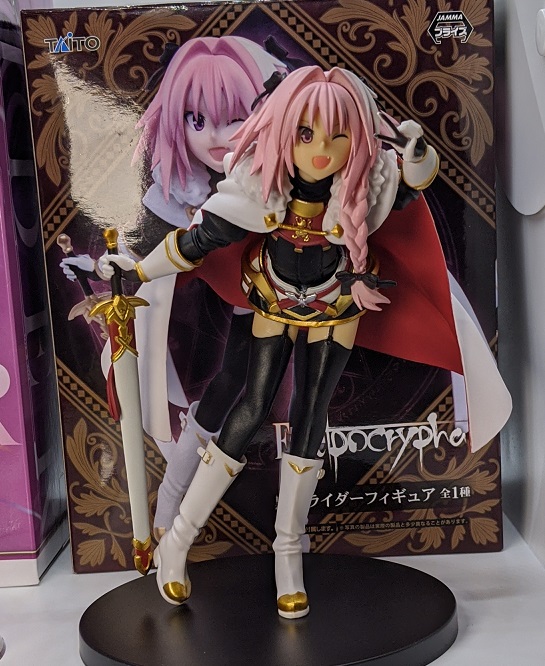 Close up of rider 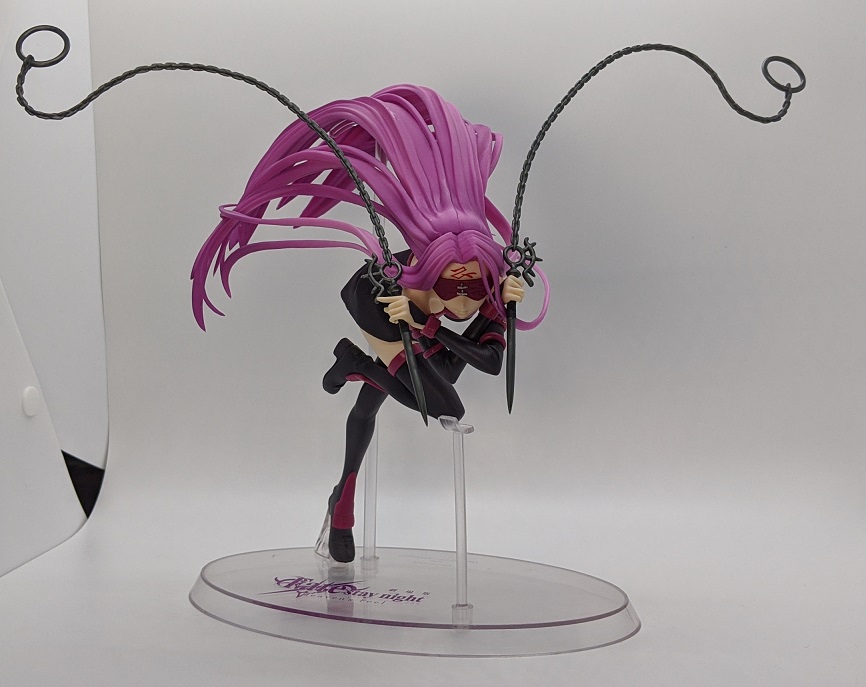 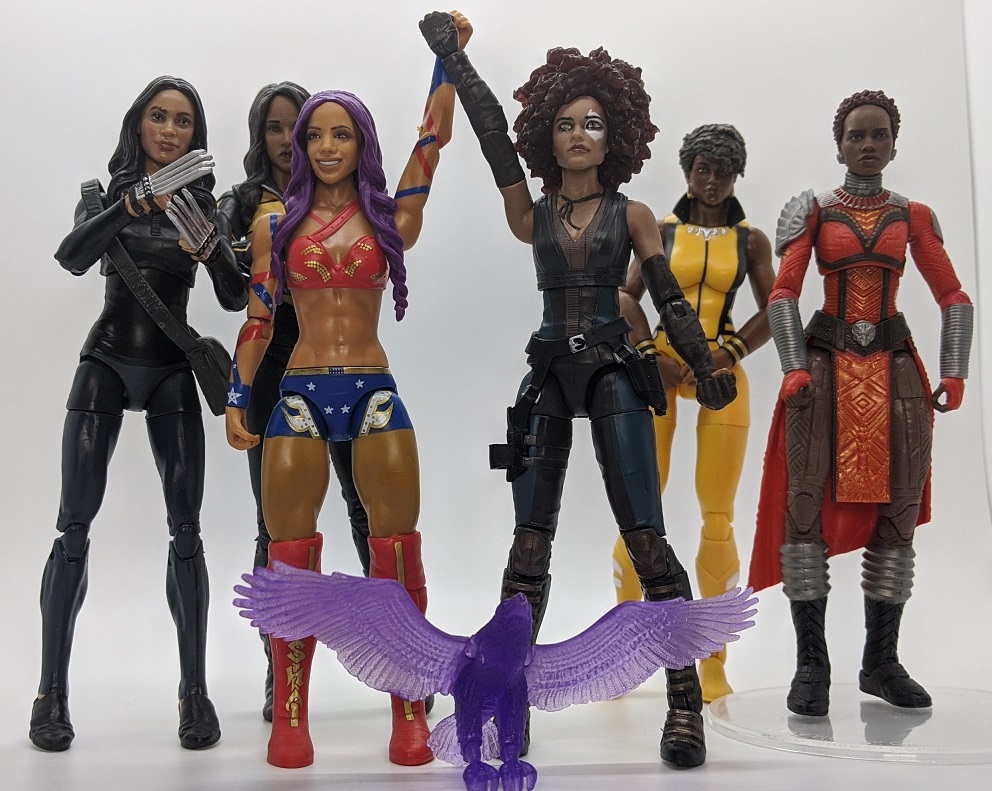 Interestingly I didn't know Sasha Banks was black. I bought the figure because of the wonder woman look. I didn't know much about her. Her toy is a lot darker than she is in real life. So I looked her up and she is german and black.

Oh wait you can't really see arow vixen. Her is another picture. 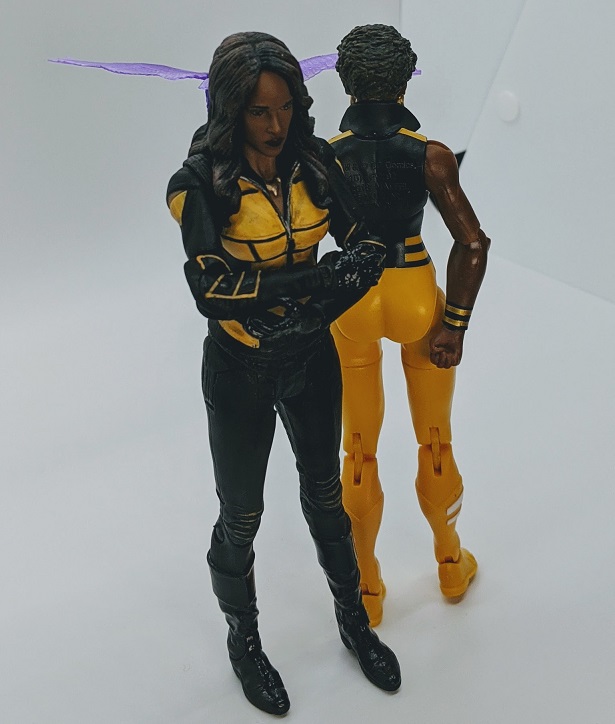 I think they really got the actress in this figure. Domino also looks like Zize Beetz.