It became a little less overwhelming when I decided to avoid doing all of the DLC exploration at once.

Woo! Glad it worked out for you.

Yes, I tend to play the DLC regions in bursts - I'll do a bit in one, reach an equilibrium, and then shift my focus to a different part of the world.

A demo of Against the Storm was released on the Epic Game Store a few days ago. It's billed as a "roguelite city-builder". It has at least two (tutorial-ey) levels available; I played through the first one, then poked a bit into the second before quitting - maybe 1.5-2 hours in total. It looks very promising, and scratched a bit of that good ol' The Settlers itch. The Steam page lists a 2022 release date, so not soon, but maybe worth keeping an eye on. 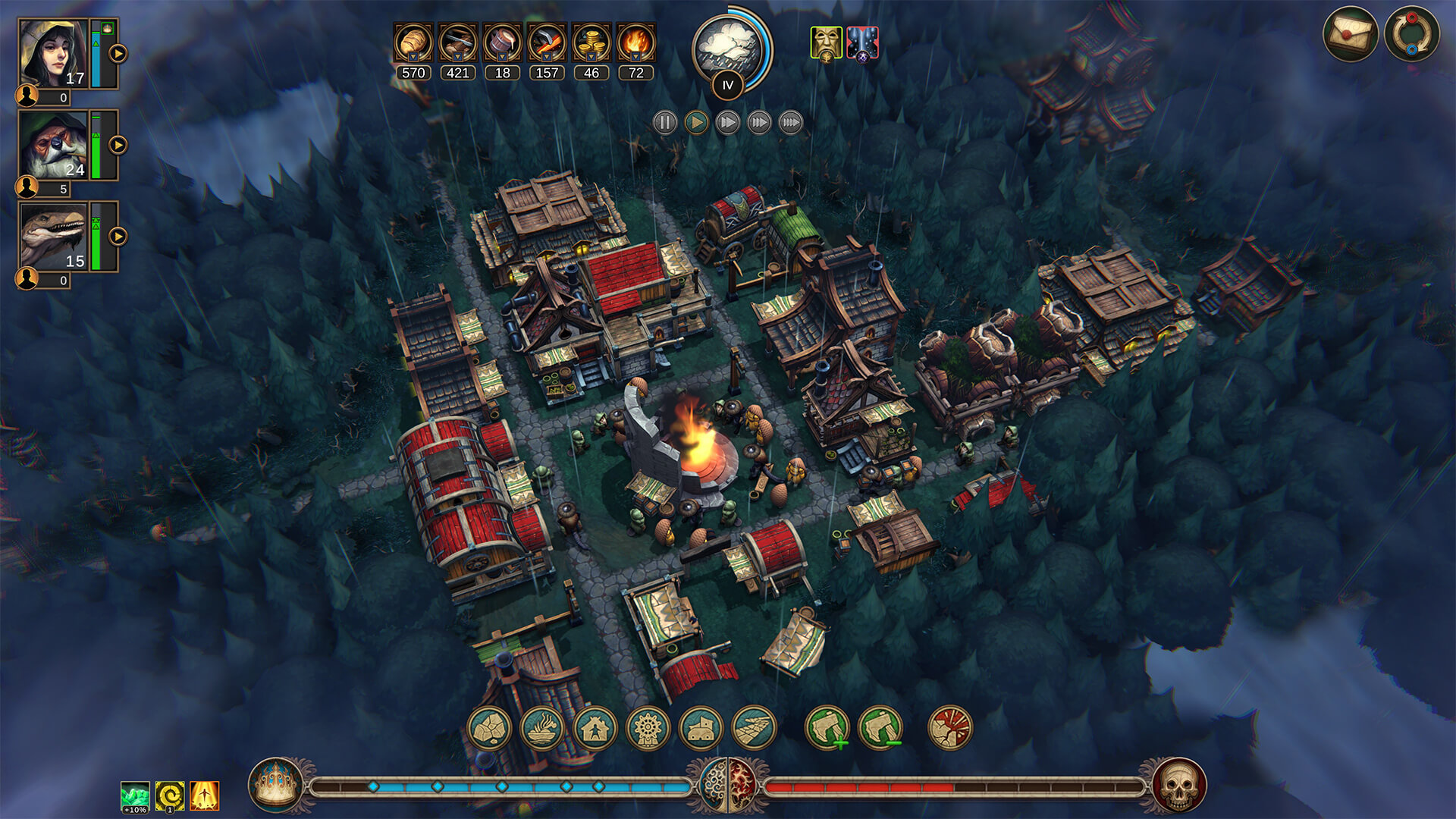 The Settlers is available for preorder from Ubisoft and Epic, and has a release date: March 17, 2022. I’m still cautiously optimistic.

At some point in the past, I was too. After videos and threads like the following, it has basically dropped off my wishlist entirely. Perhaps at best onto the "hopefully free at some point" list.

I went into that video thinking (hoping!) that maybe it was going to be a return to the original gameplay style of Settlers 1 and 2 which I liked, and expecting the reviewer to crap on the game because it's not similar to the recent Settlers, but no. No, no, noooooo. Thank you for saving me some cash.

Played the beta, and it was horrible

Was one of my most anticipated game for the last few years. But something happened to the game they showed off at announcement years ago (which looked like a return to Settlers 2-3). This is not the same, at all.

You guys need to settle down.

You guys need to settle down.

From the streams I saw, the Settlers reboot might be similar to say Northgard? More in the RTS style than the slower paced Settlers 2 gameplay from the late 90s. I bought Settlers 3 when it came out and I recall disliking that trend towards competitive RTS as well.

I think what people want from Settlers is something more zen like and calm (old Anno) rather than fast paced click per minute stuff.

I was really, really hoping for the old original slow Settlers design to come back. However, there are a few survival games that scratch that itch so I'll just stick with them.

For me, it's Rise to Ruins. Same slow build with resource gathering and such.

I’m subbed to several YT streamers who focus on city building / mgmt genres and it feels like the one with the most staying power over the past couple years is Timberborn.

Looking forward to trying it out for myself in the near future when I’m itching for a city builder.

I’m subbed to several YT streamers who focus on city building / mgmt genres and it feels like the one with the most staying power over the past couple years is Timberborn.

Looking forward to trying it out for myself in the near future when I’m itching for a city builder.

But that's like 5 months old. The genre does feel a bit stale though. I loved Oxygen Not Included but I burned out. Hammerting was a cheap knockoff of ONI

I really like Universim, but it's not as Settlers-like as, say Foundation.

What I've found with a whole raft of modern (but indie) city builders, is that they are trying to do something different, rather than the-inventing an older game. Normally I'd be happy with this if a genre is stale and repetitive, but there's been a real dearth of this kind of game for a good while.

There are a bunch 'coming soon' that are more akin to Caesar or Pharaoh, and a couple of really Indie modern-city builders, but Foundation is the closest that comes to actual Settlers.

At some point in the past, I was too. After videos and threads like the following, it has basically dropped off my wishlist entirely. Perhaps at best onto the "hopefully free at some point" list.

I saved my allowance for months, to get the 512KB to 1MB RAM upgrade for my Amiga 500, just so I could play Settlers 1 (and Geoff Hammond's Grand Prix)

I fully agree with the reviewer that Settlers is about building the strongest possible economy, the military part was when that economy was put through the test. Those battles always were the boring part though, and bolting a mediocre RTS onto a cutesy city builder like in Settlers 3 -> 6 just didn't work.

I would love for the new Settlers to integrate the logistical side of war into the endgame showdown: who can get their armies where they need to be the quickest, who can keep them fed, pay their wages, etc.? I am not seeing that in this reboot, which is disappointing.

But the reviewer just goes on a "they dumbed down my favorite childhood game" rant, even rambling about how "all game designers are dumb" which is... yikes. Dumbing down for me is reducing strategic flexibility through cutting game mechanics, streamlining is where you cut mechanics because they add more overhead than fun - in Settlers the zen expand/optimize loop. Just a few examples:

- Removing water as a resource was a solid decision. It was an infinite resource anyway and a cheap one at that. It put a very slight strain on your transportation network in the old games, and maybe some fun in positioning your wells in the right place, but didn't add much.

- Mines having infinite resources now, I'm not sure about. Expiring mines make for interesting optimization vs expansion decisions. But food providing a boost to miners' productivity instead of a requirement for production is a solid decision, as it fits within the paradigm of optimizing the economy better than your opponent's.

- I remember having to make different tools for each profession to be more of a slog, so I won't mourn its streamlining.

That said, this doesn't look like a 60EUR game to me... just that reviewer will not be getting any more views or clicks from me

If anyone is looking for some upcoming Indie-level city builders, the currently running Steam Next Fest is a great way to get a taster. The games are, in most cases, pre-Early Access, but have to be playable and offer a free demo to take part in the Festival. There have been a few of these in recent times, and I absolutely love them for trying out games, even just to confirm they aren't for me.

I plan to have a much better dig through this tomorrow, but the first few hat caught my eye were:

As I mentioned previously, a new take on a classic -

And a couple that are probably more Colony Sim than City Builder:

Looking forward to Pharaoh remaster. Still one of the best games in the genre imo.

Builders of Egypt looks nice. But worrisome that it seems to have some combat focus in the trailer.
Wandering Village has been on my steam wishlist since it was announced.

Settlers has been delayed again, due to feedback from the beta.

If they make it more like a Settlers game and less like a simplistic RTS then I'm quite happy to let them give it some more time in the oven.

Interesting news. I am all in favor of a delay. It would be hard to make it worse at least (no, I am not offering a challenge Ubisoft).

I spent some time yesterday playing the demos for these three.

Fata Deum:
I think this one needs the most work. It reminds me of Black & White, which I thought was fun, but didn't live up to the hype. Maybe these devs can do better, but they still have a ways to go.

IXION:
This was fun. It reminded me a little of Startopia, if you could move your station around. I will definitely be keeping an eye on this.

The Wandering Village:
I almost didn't bother with this one based on the trailer. Then I played it and was annoyed when the demo ended. Then I played it again this morning. If it were available in early access, I would buy it right now. It's definitely the most polished so far. There's a lot about that game that's simplistic compared to other city-builders, but that's not necessarily negative to me. Sometimes simple is fun, and this has a "cozy" feel to it. The care and feeding of the Onbu, along with directing its path through the map, were compelling to me.