Loved shutting down McCree as support and still surviving the Dragon

As I was playing today, I was reminiscing about random historic things from Overwatch.

The one that immediately came to mind for me was when the Brig Kill Participation calculation was messed up and she got credit for any time she threw an armour pack on anyone in the entire match. The end results was Kill Participation levels of 95% and above routinely.

So what are the first 5 "random thing that used to be in Overwatch" moments that come to your mind?

That time after the first Mercy rez changes where you could revive someone, use your ult, revive someone again, then be off cool down at the end of your ult to get in a 3rd revive.

That time when the game first came out and not every hero had some sort of stun/knockback ability, and you could play the game without getting juggled all over the place

Stacking Torb armor pack with Sym shield gen so you could have four 300-health Tracer tanks running around. 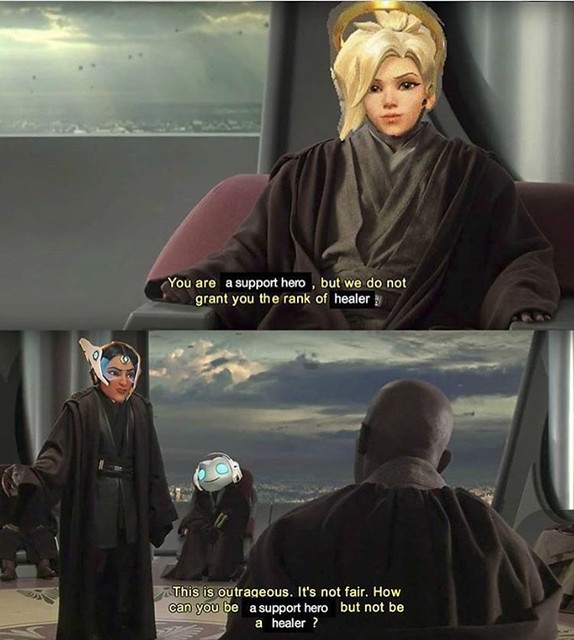 Sym is so much more fun and useful after her re-work.

That said, I do wish there was a way to play old versions of characters in custom games.

Remember when Blizzard had "Offense" and "Defense" categories to try to disguise the fact that they loaded the game with twice as many DPS characters as any other class?

Junks grenades used to hurt him.

Pharah used to have to spend half her time on the ground because she couldn't fly all the time. IMO the best change in the entire game was when they reworked this to the current form.

You could hook someone from around 2 corners with hog. Plus you had to stand still to huff your stuff.

Mcree stuck out like a sore thumb and couldn't move when he used his ult. Then, his shots would go out gradually and miss targets that were available when he hit the button. Good thing they changed that... (Oh wait...)

Edit: I'm really not salty about this like some people were, but there were times I understood the rage.

I get killed by enough McCree ults that I feel it is ok as-is. The recent buff was good enough to make it viable, I think.

bhchrist
Posted: February 14, 10:21 PM
Chances are I have something to say about this...

When you could look at a anyone's player profile to get a feel for what they play to select heroes that compliment them and you would not see a dark screen with private on it.

So what are the first 5 "random thing that used to be in Overwatch" moments that come to your mind?

Although i never played the beta, i saw videos of a time where Bastion had a small 800 HP Reinhardt style shield protecting him

A friend of mine has been working at Akshon esports for a while now they've been putting out some pretty awesome OW content. I particularly liked the last video breaking down the match where a bunch of gravs were eaten. Akshon's videos always feel polished and not overly complicated which i like.

They also put together a lot of great educational videos about different aspects of OW gameplay.

It's funny since my friend is not a big OW fan and doesn't really play the game, but it's his job to fly out to all of the big OW events and cover them.

bhchrist
Posted: February 17, 3:08 AM
Chances are I have something to say about this...

Had a heck of a night on Rein, Friday. Three PotGs out of 5 or 6 games. That is 3 more than most weeks. On top of it, there was a quad kill and a sextuple. Healers were pretty darn great.

Couple of vids from past week. Nothing Serious.

And Stay trying to do I Don't what and paying for it with his life.

One of our recent rolls

Staygold shows us the proper use of a tire

I do a poor imitation

No one backs Junkrat into a corner!

I love it when this happens

the sleep on the phara was dope, nice!

They really are pushing that 1-3-2 idea. I don’t want to accuse Jeff of a biased opinion, but I’m confused how it can be both “very fun and very controversial.”

Also off tanks should freak out! :p

The Experimental Card should be up tomorrow on all platforms. First card is 1 tank, 3 damage, 2 healers. Off tanks will see a number of balance changes for this card only. You still earn XP, loot boxes, and event rewards from games in Experimental Mode.

Jeff hints there may be other surprises and rewards.

He also really doesn’t want anyone to freak out.

Even if it's experimental (which seems unlikely since Jeff seems to be about as guilty as a guy who gets caught in bed with another woman - no baby, it's not what you think) it won't fix the issue. Sure, you might lower the que times for dps but you still are short healers. Healing que is roughly the same as tank. So what's next 1-4-1? Make healing and tanking more enjoyable. Make them feel like they have an impact on the game directly. That was, and always will be why people prefer dps.

Healing and tanking don't feel very impactful any more. They seem to nerf support whenever one is meta. I don't know when the last actual, impactful support buff was. With DPS they buff the weak ones. Tanks lately have just been nerfed significantly. Then blizzard is like, we don't know why people want to play dps. Really? Because they feel like you can make a difference as a dps rather than just attach your damage boost to a pharah and hope she does something.

I don't know. I feel like I often get gold damage and/or elims as tank. I did so tonight as Zarya and Wrecking Ball. I felt like I was having an impact. Heck playing Rein with a good healer is one of the best feelings in the game, IMO.

There are twice as many DPS heroes as either of the other two roles. The problem with tanks and supports is variety, pure and simple.

After getting pushed to checkpoint 3 on defense on Dorado rather quickly, Here is our 7 min hold inside on last checkpoint.

which seems unlikely since Jeff seems to be about as guilty as a guy who gets caught in bed with another woman - no baby, it's not what you think

To be fair I think every video he's ever made has had that tone. I think he's (very sensibly) hyperaware of the fact that virtually everyone hates virtually every change to start with, and if he comes across as anything other than abjectly apologetic then the fan reaction will be "omg blizzard is ramming X down our throats!1!!1".

(I mean the fan reaction is always that anyway, but..

Off tanks will see a number of balance changes for this card only.

This is the bit I'm widgety about. Are there more details here? Having multiple comp modes sounds fine to me, but if they each have slightly different rules... yech

I don't think the plan is to have multiple comp modes in the end. If they like 1-3-2 then they'd implement it and make changes. If they don't then it just goes away after the experiment.

Wow, I like those tank changes for the Experimental Card!

I’m guessing I’m not the only one. Current wait times have tanks at >10 mins while DPS and Support are 3 and 2...

They look interesting but the Zarya and Roadhog don't look like enough on paper to make them solo tanks.. Time will tell.

Didn't see any changes for ball either in the list above or on the experimental card. Ball will need changes.

Zarya bubbles 3 people at a time. Cooldown is too long and bubbling 3 people at once is weird and doesn't really work well with triple dps comps which are often more spread out than 222. Seems like it would work better being done like brig armor. Give them 3 and put it on a countdown. When you are the MT you are leading the team. You can't bubble effectively in front of your team and bubble works best from behind. If they make it 3 separate bubbles it might be okay.

Rein is overtuned compared to the rest of the tanks. He shreds everything. 2 hammers and someone else breaths on someone and they're dead. In rein vs rein duels it feels like out playing the rein is a lot harder unless you have better support. Played another rein who yolo charged over and over but had a pocket and just kept swinging. As Orisa I couldn't do a thing. Had to swap to rein. Even at that, it was very difficult to kill him. Honestly, the only tank that feels good is Rein.

Orisa and sigma are essentially pre-nerf. Undertuned for this IMO. DVa is as well.

Hog has lots of survivability but typically people playing hog don't play him like a tank. Got a hog when I played support and all he did was sit at the choke, hiding on the side and try to hook people. Essentially, we had no tank. With 2 tanks at least one of them likely would have played a role that resembled a tank. People can't play off tanks as a dps now but I'm sure that will continue. They'll just use their extra health pool to live longer leaving the team without a dps.

Overall, the changes to the tanks are pretty underwhelming and this mode feels way too much like pre-role-lock. Tanks are slightly more durable but damage has gone up a lot. Tank ques are running >10 minutes, dps 4, and support 1. Sure, people are messing with tanks right now but if the times continue there will be even less tank players than there are now. So far it feels like there's a lot of work left to do, especially with all the nerfs and buffs that happened when they tried to stomp out GOATS and double shield.

So, long story short they buffed offtanks by making Rein do 20% more damage and Hog/Zarya do 20% less? Hot damn where do I sign up.

Though to be fair, raising the cost of Whole Hog is a buff, since Hog usually dies from it

(Jokes aside: does Zarya's "all allies within 8 meters" include Zarya?)

bhchrist
Posted: February 26, 3:38 PM
Chances are I have something to say about this...

So, long story short they buffed offtanks by making Rein do 20% more damage and Hog/Zarya do 20% less? Hot damn where do I sign up.

Though to be fair, raising the cost of Whole Hog is a buff, since Hog usually dies from it

(Jokes aside: does Zarya's "all allies within 8 meters" include Zarya?)

No, only her allies. Her personal shield is separate.

To Homer's point of Roadhog, it was the first few hours. If you expect a pubbie not communicating to play Roadhog is a totally different manner than he has been used, well, you know what you get. I think you need some time to see how he works in a 1-3-2. My guess it he works better on KotH, where you may have have more teammates clustered to benefit from the pig farts, but who knows. I like the fact that they are trying some things at least that can get a larger test base than the PTR had and they are willing to tweak more often.