Looks like we've got another round of balance changes on PTR.

Baptiste's lamp lasts 5s instead of 8 and cooldown is 25s, up from 20. His ult also charges 20% more slowly. I like this one; he's still got insane healing so he still gives value, but you'll have to be a lot more careful with timing lamp or risk wasting it.. I would've liked to see at least a small damage nerf; it's a little ridiculous that a top-tier healer can DPS as well as the, y'know, DPSes.

Hanjo's primary fire projectile speed gets reverted to pre-rework levels. Short of actually deleting him from the game, this is pretty good too. People always focus on Storm Arrows, but I've always maintained that having a relatively easy-to-hit instakill available on demand was the real problem.

The slow effect from Mei's primary fire wears off half a second sooner, giving a little more opportunity for counterplay before her victims are fully frozen.

Orisa gets a small nerf to Fortify's damage reduction. Doesn't seem likely to make much difference-- oh, so now she dies slightly sooner when she dies last-- but then, I never found her nearly as oppressive at my level as she supposedly is at higher levels.

Finally, Dva gets a big cooldown reduction on her boosters from 5s all the way to 3s, putting her up there with Hammond as one of the most mobile heroes in the game. This could make her more viable at hunting down snipers and chasing down flankers to confirm a kill, although I don't think it quite brings dive roaring back to prominence.

It does start to make Winston's 6s jump cooldown look positively sluggish, although at least Winston can actually, y'know, tank for his teammates a little.

It’s partly why I don’t play DPS in comp anymore. It’s just not worth the wait times.

I bet they left almost as fast after that win.

I initially thought: “man, I was a useless Lucio on this map” (and I definitely was), but in that replay my contribution was to run to the second point and touch it, thus having them all group up on the point (and pay for that with my life) so that Chavyn could shatter and swing all over them.

The replay system is cool. Blizzard should patent and license whatever tech they use to make that happen.

RomanTaz gets his x3 Dva ult kill then dances killing my Mercy as I am asking him to fly so I could flee the Hog. He gets his punishment in the end lol..

90s of OT to win on Rialto. Seemed like an eternity..

So Lunar New Year event starts tomorrow. Wonder what the theme will be this year (2017 was Journey to the West, 2018 was the Four Symbols, and 2019 was the Three Kingdoms).

The theme will be a free Hong Kong.

The skins I saw for this event were very lackluster. Nothing really made me move and say I want that.

Looking at the forums it appears Blizz or Jeff tossed out an idea of 1-3-2 role que (tank-dps-heal). First I had heard of it so wondering if anyone else had.

Haven't heard it. Don't want it. 222 is the best thing that happened to comp. This just brings back 3 dps and a hog. Ugh. If they reclassify off tanks as dps then I might be okay with it. Otherwise make playing tank more appealing instead of appeasing DPS who only complain about their tanks anyway.

Man DPS are whinny in comp, at least in high silver low gold.

Blizzard: Releases literally twice as many heroes in the DPS category as in either of the others.

Also Blizzard: Durr, I wonder why everyone's playing DPS and the queue times are high?

If they really want to fix the problem, release four new tanks and four new supports with Overwatch 2, and don't release any new DPS heroes until the other two roles reach parity.

I love playing tank, but when there are an average of two viable main tanks to choose from in any given meta, the lack of variety wears on me after a while. Removing off-tanks from the game (either by making them de facto unpickable in a 1-tank-only 3-2-1 role queue or by nerfing their tanking ability and making them DPSes) doesn't fix that problem, it makes it worse.

Toying with some added effects in the videos.
Team chases a Dva in orderly line.

LOL "now i want to know what being in this hole is like, OH GOD IT'S TERRIBLE! IS THIS WHERE WE'RE SENDING PEOPLE?"

Twice in a row today. Sat down to play an hour ago and haven't had a match yet.

dang that sucks. Definitely could use a rework for things like that in comp.

Bringing the test server patches to a new live server mode is a good change. Will get more people testing it out that way.

Not sure I like the plan to "target the meta"... a moving target can be frustrating in a different way than a stale meta.

Not sure how I feel about Hero Pools.

* Blizz are going to be rolling out balance changes more quickly, similar to the last couple patches. Blizz is going to try to be more aggressive about targeting the meta, while not being as afraid of straight up reverting changes that don't work.
* There's going to be a new "experimental" game mode in the main client that's sort of a PTR-lite. It will be available on console as well.
* In the next season of competitive, every week will have a fresh "hero pool" chosen by Blizzard. Around four heroes at a time will be not included in the pool. Jeff says they might futz with the number of not-included heroes and the timeframes for the pools until they get it right, or just drop the idea altogether after the next comp season if it turns out to be a sh*tshow.
* j/k, just seeing if you were paying attention.

I don't play competitive, so the hero pools don't directly affect me, but it will be interesting to see what the knock-on effects on Quick Play are. Will we get a fresh influx of one-tricks every week streaming in from Comp when their preferred hero gets banned?

* In the next season of competitive, every week will have a fresh "hero pool" chosen by Blizzard.

* In the next season of competitive, every week will have a fresh "hero pool" chosen by Blizzard.

Enemy Ana and their other healer teabags Chav while he's sleeping, but both pay with it their lives and they end up losing the round because of it.

The Vancouver Titans have arrived and started settling into the city before the start of the season next weekend.

The team had a meet & greet today where they had autograph signing along with some PC's for players to play QP games with fans. There was a fairly large crowd and it was great seeing a lot of younger kids excited to the meet the team and play a few games with them. With all of the talk about Overwatch being a "dead game" it was reassuring to see the next group of players still interested in it.

Along with some autographs I got a pictures with the team's Genji main Haksal and D.Va main Jjanu

We played a few minutes of deathmatch during queuing where I got obliterated by the team's new main tank Fissure as he played Tracer and I flailed around uselessly as Hanzo. To keep the flow of players in and out of the PC's smooth, 6 new generic accounts (named Titans1 to Titans6) were created for the event. Unfortunately since these accounts were new, that meant the matchmaker was matching us against similarly low level teams. 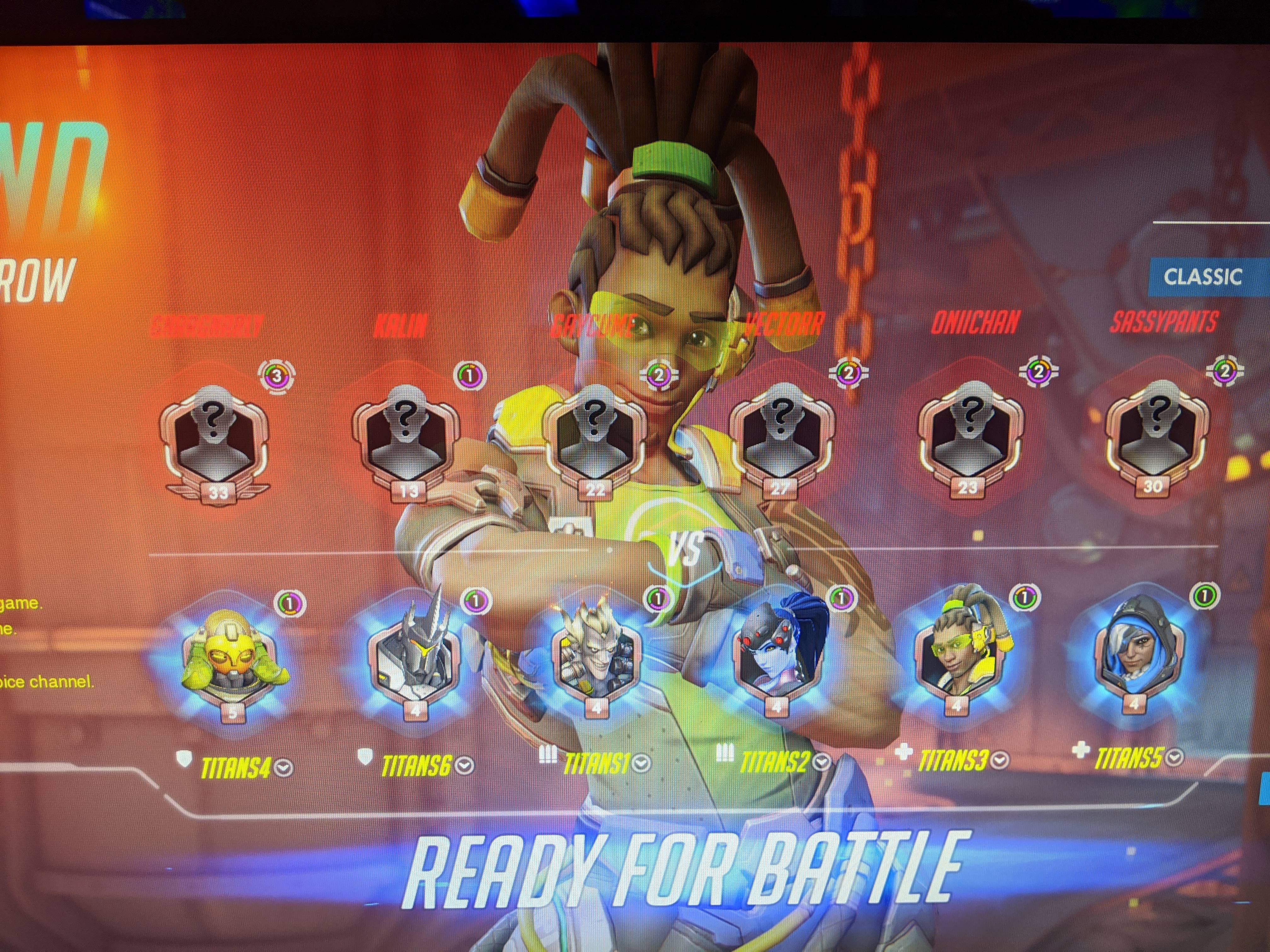 The enemy team quickly realized their bad luck being matched against us. 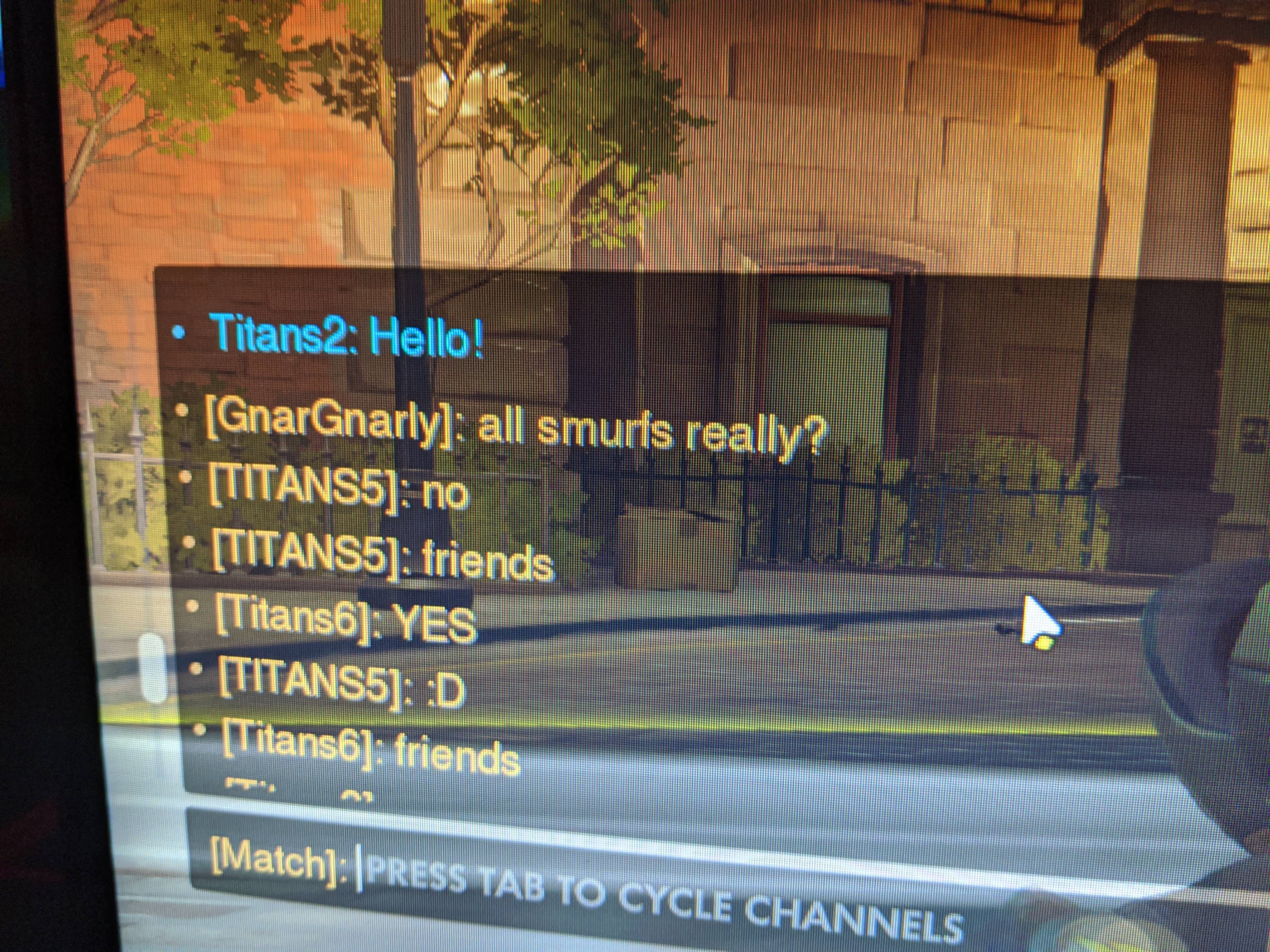 Ended up with gold elim/healing as Lucio which is always a great feeling. 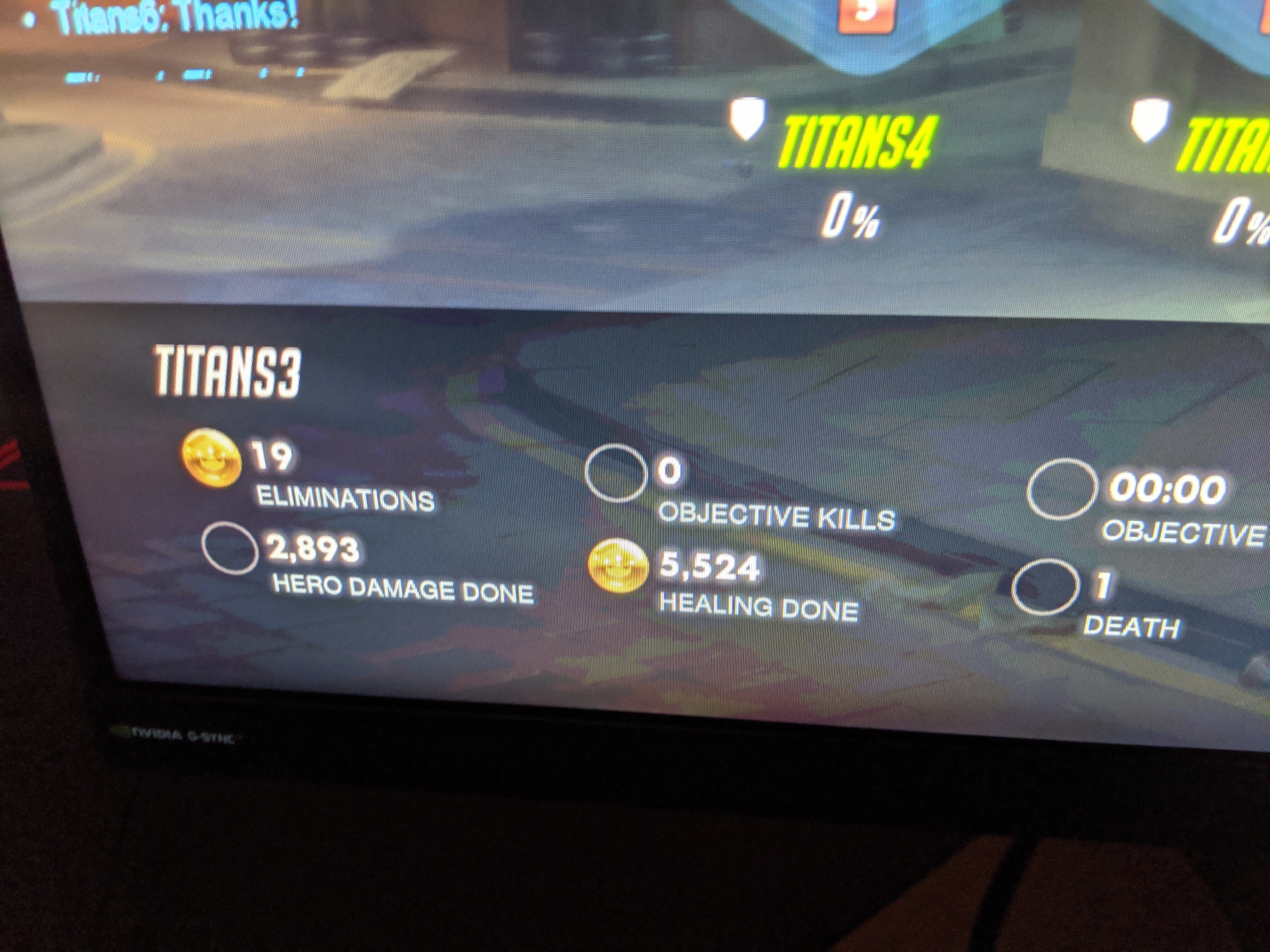 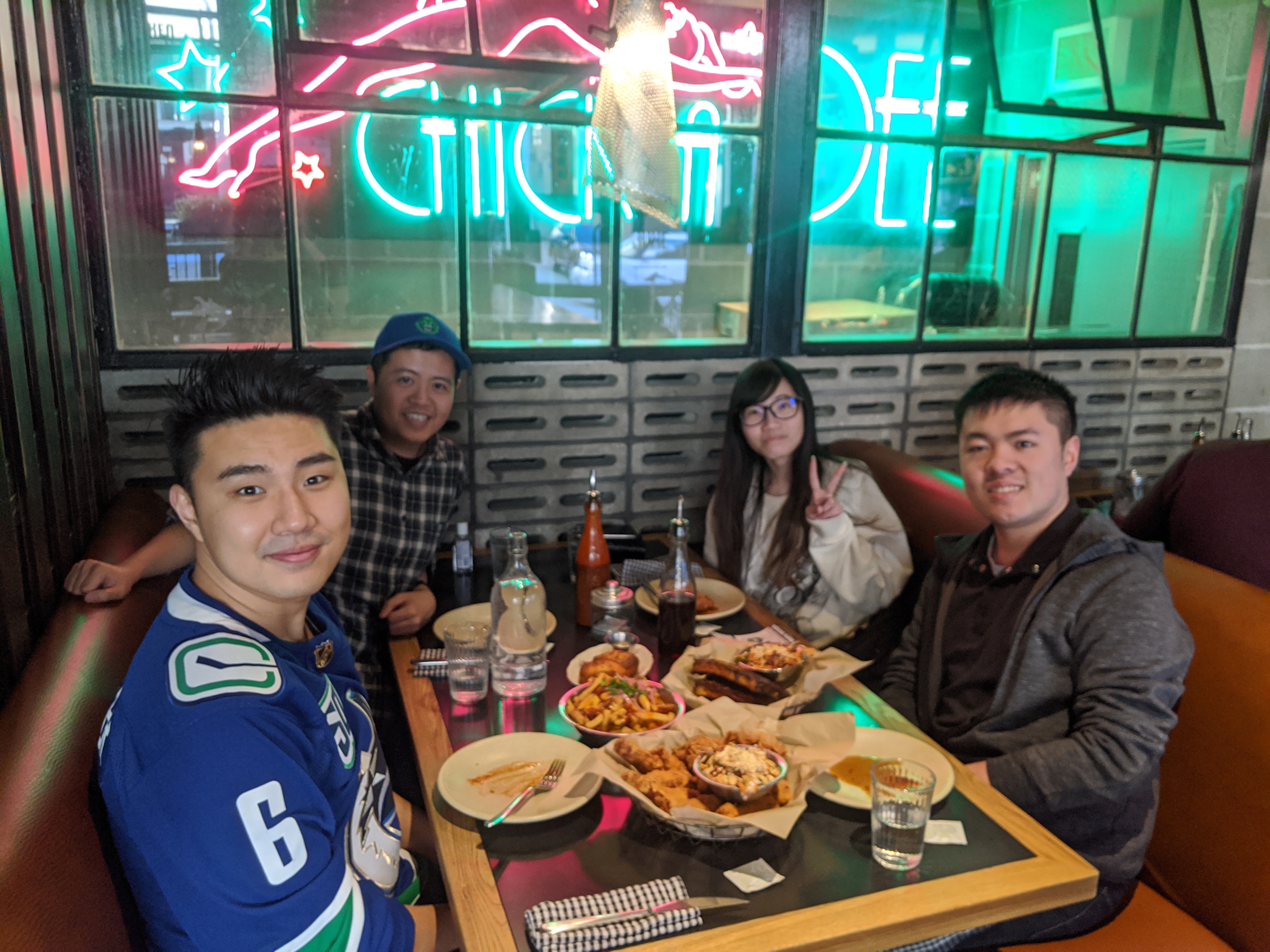 "Ended up with gold elim/healing as Lucio which is always a great feeling."