DLC/Expansion - The Reaper's Due is free on steam now. I'm not sure if it is free forever or a limited time.

Thanks for mentioning this Baron, I picked it up.

I should probably take some time away from OOTP and get back into CK2 for a bit.

Well, we now have a release date for CK3. Whoever had September 1st in the pool is the big winner.
https://www.strategygamer.com/articl...

The previews look amazing! Just curious - anyone else trying to work their way through the Monarchs Journey challenges to unlock extras in CK 3? I’m enjoying them but they are hard. Not sure the extra effort is worth it.

Best. Day. Ever! I figured it'd be much later than September 1. Time for a new thread?

- I really have to get busy on those CK2 challenges. I think I'll start in June.

Wait. I thought the object was to *collect* all the iterations of Crusader Kings and DLC but never really play them. Have I been doing it wrong? I thought my Achievement score was through the roof!

Nope that's how I've been playing it

What is your coolest crusader kings two story?

I’m considering taking the day off of crusader kings three’s release just so that I can really learn how to play the game. Does anyone know what time of the day paradox games are released?

I'd take the following day. Sometimes releases get delayed at the last moment by digital paperwork or missed submission deadlines.

I don't recall the time of day when they released the Rome game.

Taking the day after release off would probably be the better idea.

I've still had that plan fail, but at least then, you're not waiting the whole day only to be disappointed...

I’m working from home these days so if I take the second off and have to change it it shouldn’t be much of a problem.

Surely you want to take the day after the hotfix gets released off? It’s still Paradox game (or do you intentionally want to get in on the most outrageous mechanic exploitation)

Those horses aren't going to crown themselves Emperor.

I played imperator when it came out and barely manage to create a decent size empire. I went back recently and had no idea how to function and ended up losing the game in a Civil War pretty quickly.

I seem to have no idea what I'm doing... 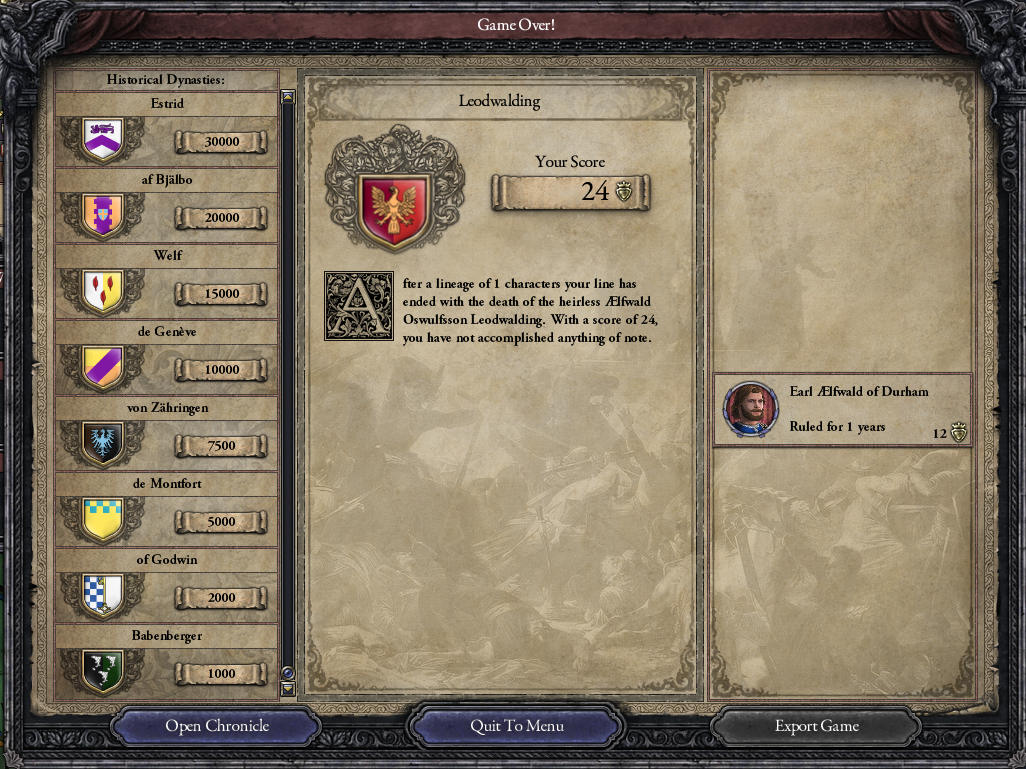 I started with a kid, then had twins. Then I got dysentery and died. Apparently, my three kids weren't of my dynasty or something?

Were you married matrilineally? If so, the kids go to the mother's line. Also, the game should have warned you that you were heirless.

Starting up you have to really dig in and find out as much as you can about your character. Looking at any spouse and kids you may have on start is one of the first things to do. After all, the only way to prematurely end a game (aside from just quitting of course

Well, it did warn me that I was heirless, but that didn't help me do anything about it. My oldest seemed to be of a different dynasty, but I couldn't figure out why. He was the child of my wife and I, but didn't have the same dynasty as either of us. Then I had twins, and they were of my dynasty, but weren't qualified heirs, apparently.

I figured maybe I could wait until my oldest came of age and then murder him or something, but then I died within a year. So ended my first attempt to figure it out as I go. I'll probably try another, but maybe the random character button isn't the way to go. All of the suggested characters were kings and stuff, but I figured playing a count would give me a chance to figure things out with fewer variables.

Also, I took the earliest start date (769 I think) based on my experience in EU4 and HOI4, but maybe this wasn't the best plan either?

Depending on where you start is more important in my opinion. Ireland is a good place to learn - you don't have to watch your back since the only big entity that can gobble you up easily is whatever is in England. In 769, even England has a bunch of smaller entities that would have a hard time conquering Ireland. If you start somewhere in, say, the Francias, you always have to be watching 360 around you: slightly bigger fish will come along and snipe you all the time. Further east is even worse in my experience.

Starting out, I recommend looking at your marriage if there is one to see if it is matrilineal. If so, need to get that sorted quick. This can be hard because the wife's family may be too big to anger by making the wife go away. Also check the succession laws for your desmense. It is probably gavelkind: most start of that way. Then check your heir. If you don't have one, need to figure that out ASAP as you are at risk of losing the game to the next disease/war/assassin. The game will tell you that you have a problem but will not help you fix it.

Take all this with a huge grain of salt, I have not played in a while. I wish I had more concrete advice on where to start these days but I don't. Even my Ireland suggestion may be totally incorrect. YMMV, no warranty implicit or otherwise, etc.

Playing a count, and starting as early as possible are both great ideas, but I would probably avoid the random character generator if it can give you heirs that aren't your line. The community generally refers to the Ireland and Scotland regions as "noob island" because it is relatively calm and simple compared to other areas. It's a good place to pick a count or duke with a small domain and expand from there if possible while learning the game. Good luck!

Yeah. The Random Character button is for bored experienced players looking for a challenge.

The standard advice that I found helpful was "start in Ireland." I found it was a simpler and forgiving place to get started in.

It's true. By the time you've figured out how to subvert and conquer the island, you've gone through a generation or two and used a good percentage of the tools the game has.

I think my first game was in Iberia, which probably says something about me.

The game gives you a lot of tools to fix problems but doesn't really tell you where they are. For a non-dynasty heir, you can: change the rules of succession, assassinate them, send them to the church (order to take vows, grant temple, investiture, send them to a holy order), send them to the front line of a war and hope they get, designate an heir (if succession laws allow), win the election (if elective gavelkind, feudal elective, etc.), casterate them (if Byzantine), blind them (if Byzantine), egg them into a duel, execute them while imprisoned, conduct a dark sacrifice,, have them judged by the sun, let them catch the plague, etc.

Most of these are difficult to pull off at the start of the game, and probably impossible if you die in under a year, so I'd chalk that run up to extraordinarily bad luck. 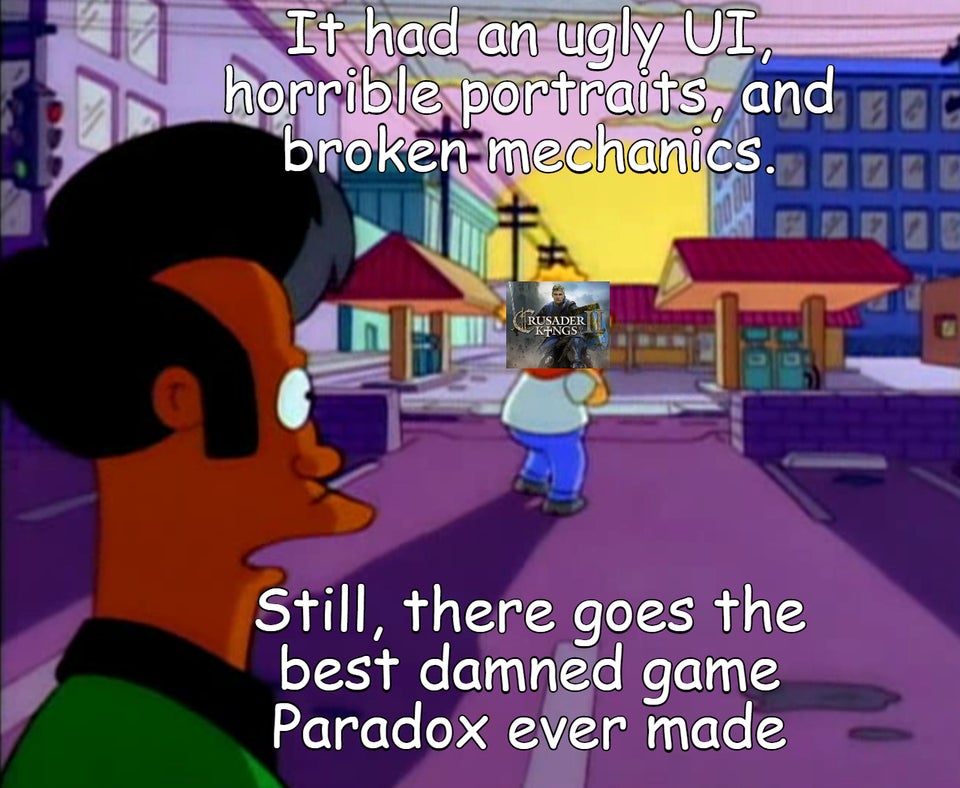 I bounced off Crusader Kings 2 after my first attempt (base game) a while back. After playing I knew there was a good game somewhere under that hud, but I got frustrated floundering around and then distracted by other games - I kept meaning to go back!

I did pick up all that DLC from the Humble deal earlier this year so perhaps now is the time to jump in? I guess it will be a year or two (or three?) before CK3 is fully formed with content and at a (semi) reasonable price. I may as well take my time with CK2 and hopefully get to enjoy a game that so many people put at the top of their favourite game lists