Those may still be coming. These are clearly labeled as *personal* fleet carriers.

My biggest curiosity is whether the fuel resource will be a "fill up the meter to jump" thing or "use x amount from your stash" thing.
If we can store up fuel for multiple jumps it could be fantastic, but i can't say I'm trusting they'll make the player friendly decision.
Also i wonder if perhaps the mining support ship will let us store mined goods so it starts being more effective to mine outside of the bubble.

Whatever it is expect to have to grind for it.

Yeah, I've only got a few hundred mill to spare, and we'll probably need a couple billion at least.
Anyone on pc want to do a meet up sometime to do tandem mining?

I'm about 19K LY from home know, 80K LY from Beagle Point. There is nothing but black void beyond me. 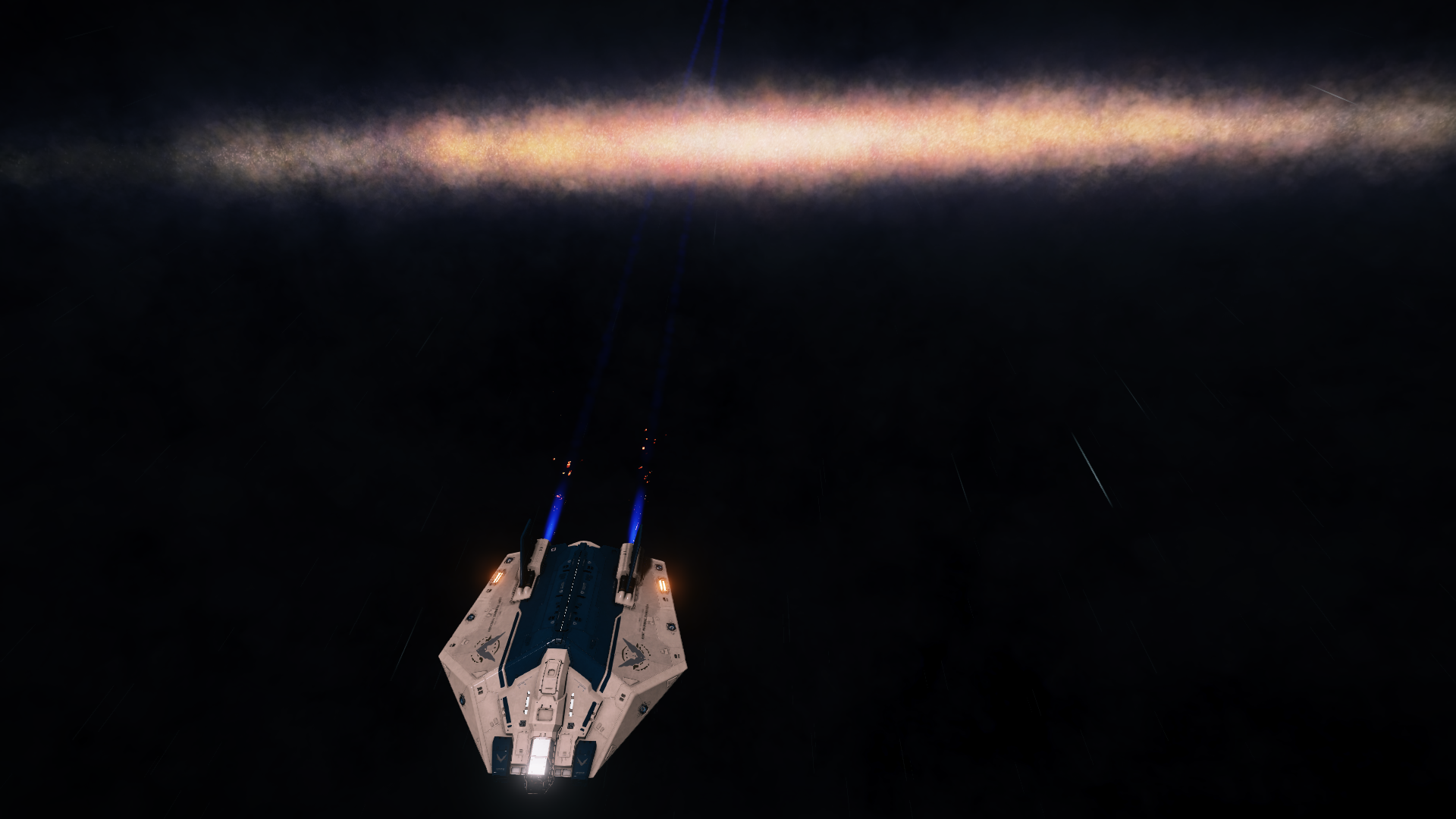 Mama i'm comin home! It's a longer trip than expected though. I forgot I'd just left my conda out where Frontier's practical joke stranded it and not gone back since

Well i managed to work my way back to the bubble, had to go the long weay round by california and there was a moment where i was seriously concerned i was completely hemmed in by the permit zone.

Tried out core mining for the first tine, and i have to say it is FUN. theres a bit of tedium finding appropriate rocks, but the activitity of setting charges and getting them charged corectly and them blasting chunks from inside the asteroid is really compelling, quite a bit more fun tham laser mining.

Finally got back into the game after a 2 year break.
My god, but its SO MUCH BETTER than I remember.

Going bucknuts on exploration for a while, then gonna try my hand at this "Void Opal Mining" thing.
Groovy!

Exploring is MUCH more lucrative. Your honk now gets you the payout that spending an hour tagging a system used to, and actually going and tagging individual planets like earth likes and terriforming candidates is really profitable.

Someone 3D printed the entire Elite fleet, with a few other objects for scale... 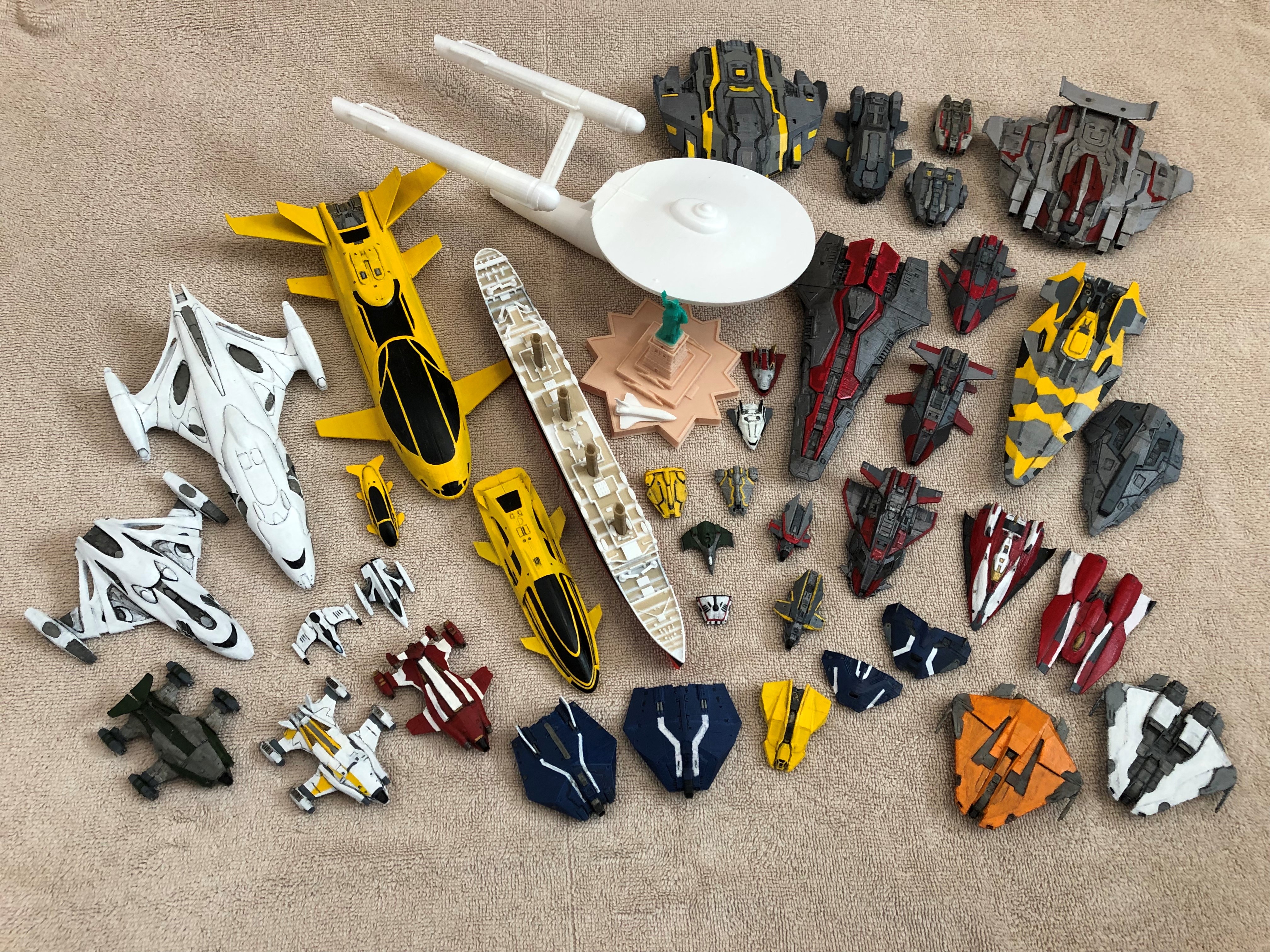 Oh. I might have to figure out which of my friends has access to a 3d printer...

I can't get my head around how small the Dolphin is relative to the Orca (even though I've seen those "Elite Ships to Scale" videos.

Oh. I might have to figure out which of my friends has access to a 3d printer...

This could be just the thing that makes you decide to become that friend.

I can't get my head around how small the Dolphin is relative to the Orca (even though I've seen those "Elite Ships to Scale" videos.

Or when you realize the Dolphin could fit inside the observation deck of the Beluga.

There's a Space Shuttle sitting on the base of the Statue of Liberty; the Dolphin is somewhat bigger.

Orphu
Posted: September 9, 12:01 AM
Could be fourth declension neuter...

So, will they print a fleet carrier?

Hi everyone! On a whim, I started playing again this weekend after literally years away! Is everyone that's still playing in the Veloxi group, or has it spread out?

Hi everyone! On a whim, I started playing again this weekend after literally years away! Is everyone that's still playing in the Veloxi group, or has it spread out?

When I do see GWJ friends online at the same time, I mostly see them in open play, not the Veloxi private group.

I put in a request to join the Veloxi group awhile ago but haven’t had any luck with that yet.

I put in a request to join the Veloxi group awhile ago but haven’t had any luck with that yet.

Unfortunately, the only way to add people to the group is to have Veloxi personally click the button, and I think he hasn't logged into Elite lately.

I so badly want to invest more time in this game but I fear that I have created too many barriers for myself. I have multiple starts in this game on both PC and XBOX. I have a VR headset I have hooked up, and purchased the LogiX5Pro Hotas. All which cause me to stare at this game literally confused as to how to begin.

This game caused me to pick up a VR set and HOTAS as well. I'm far from an expert, but might suggest getting used to the HOTAS setup before spending much time in VR. Trying to learn how to deal with both at the same time was too much for me, but once I got a basic handle on how I wanted my HOTAS configuration to be, VR became fun instead of challenging.

Is there any news on when the update that should smooth the start is coming?

I thought that was the last major update? The new area for beginners is definitely in the game now.

I think that the next update (18 September) also is focused on newer players.

Here's the video they posted yesterday. "Content reveal" for the update supposedly starts at about 12 minutes. I haven't watched it yet.

According to their forum thread:

We've introduced a new starting experience meaning that it's easier to pick up Elite Dangerous than ever before!

Under the tutelage of Pilots Federation instructor, Theo Acosta, new Commanders will be led through a fully-voiced experience before being left to pilot their own starter ship, the Sidewinder! Throughout the experience, Commanders will learn the basics of space flight, scanning and combat as listed below:

Basic flight controls and scanning.
Supercruise and navigation.
A combat exercise around a megaship.
Completing one's first Hyperspace jump.
Docking at a starport.
All of the training will include voiceover across our supported languages.

This new starter experience will also be added to the existing list of training simulations, found on the internal panel of the Commander's cockpit, meaning even the most veteran of pilot can still experience it.

Revamped the livery UI for applying cosmetic items and Game Extras to your ships.
Commanders will be able to access their ship livery from the main menu, so even if their ship is not docked at a starport, they will be able to change up the ship's appearance on the fly!
The new store will allow for even more detailed previews of available customisation options across all ships, as well as giving Commanders the choice of purchasing individual items, as opposed to being limited to bundles of customisation options

ARX can be purchased, as well as earned by simply playing the game, to acquire Game Extras such as Paint Jobs, Ship Kits, Bobbleheads and more!
Commanders can earn a total of 400 ARX per week, which get added to their account there and then. These can be saved for later or spent right away!
You will no longer be able to purchase Game Extras using current payment methods and instead will require ARX, available in a number of packs (listed here.)
We've posted up an important notice about ARX and Frontier Points which you can find more information about here.

Tried to give this another shot, but interface is too dense. Just replacing my note about looking for peeps.

I've been making a push to finally get my first Elite rank, after basically 5 years in game and about 940 hours now. I did a lot of exploration before they revamped the system, so a lot of that time was making pennies doing what would now make me millions.

Anyway, when I started last week I was at about 20% Pioneer. I've been making short trips here and there, with the last one just doing some of the ELW's on the R2R circuit. I just sold the last bit of data with my fingers crossed, only to find that it put me at 98%. Grrr.... Out again I go, but at least this should only take a few systems. 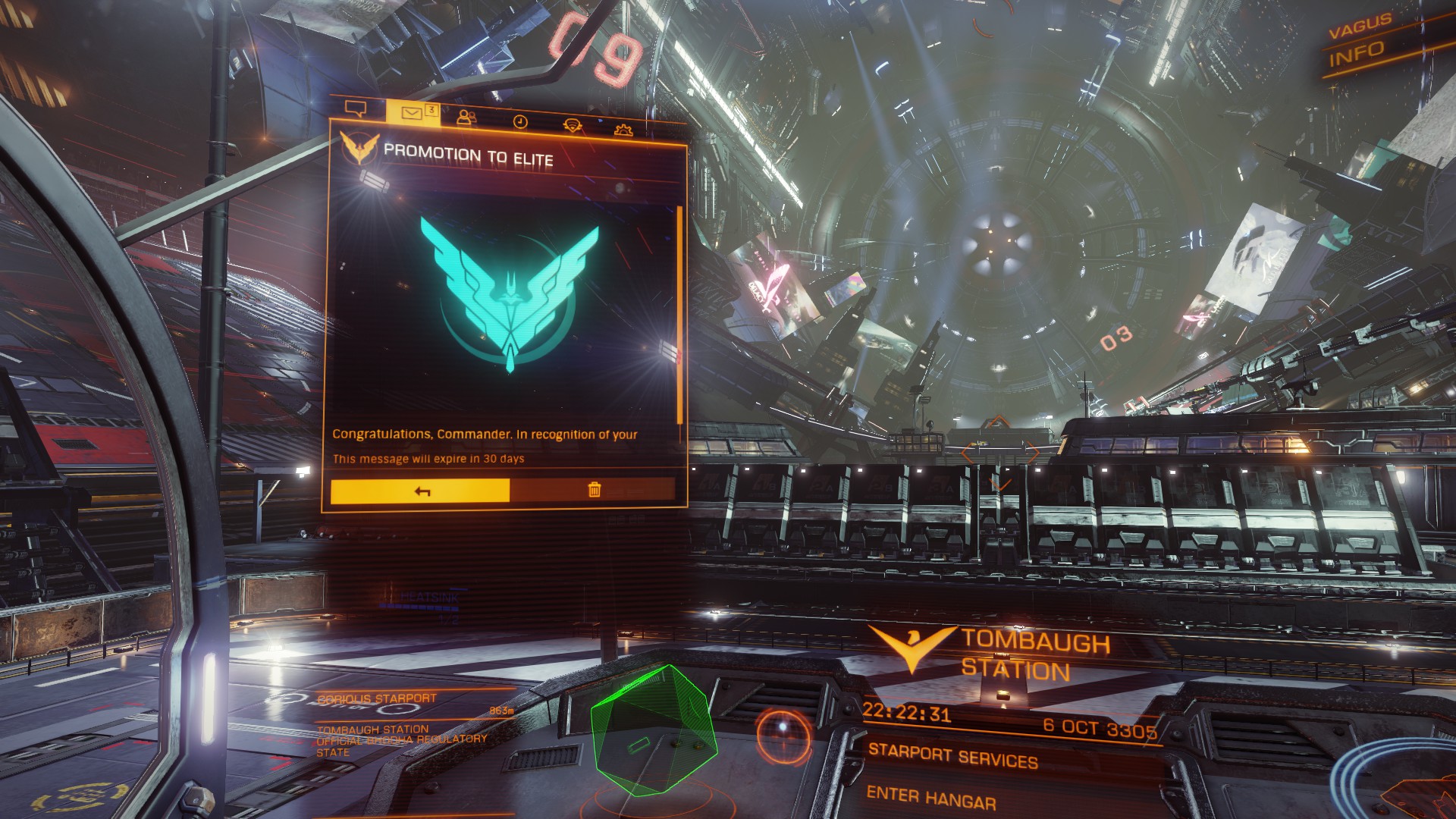