I just think these images need to be on every page of this thread.

I had this disease, especially after the SImCity5 debacle, but after a few cities in Skylines, there's just SO MUCH SPACE that you don't have to worry about maxing land use, you might just be able to fill the entire area available before your PC melts, especially if you use the mods that unlock 25 tile cities. Lets not get into the mods that unlock 81 tiles (does not increase max # of buildings etc, so would just be -very- spread out).

Pretty outstanding to look back and compare: 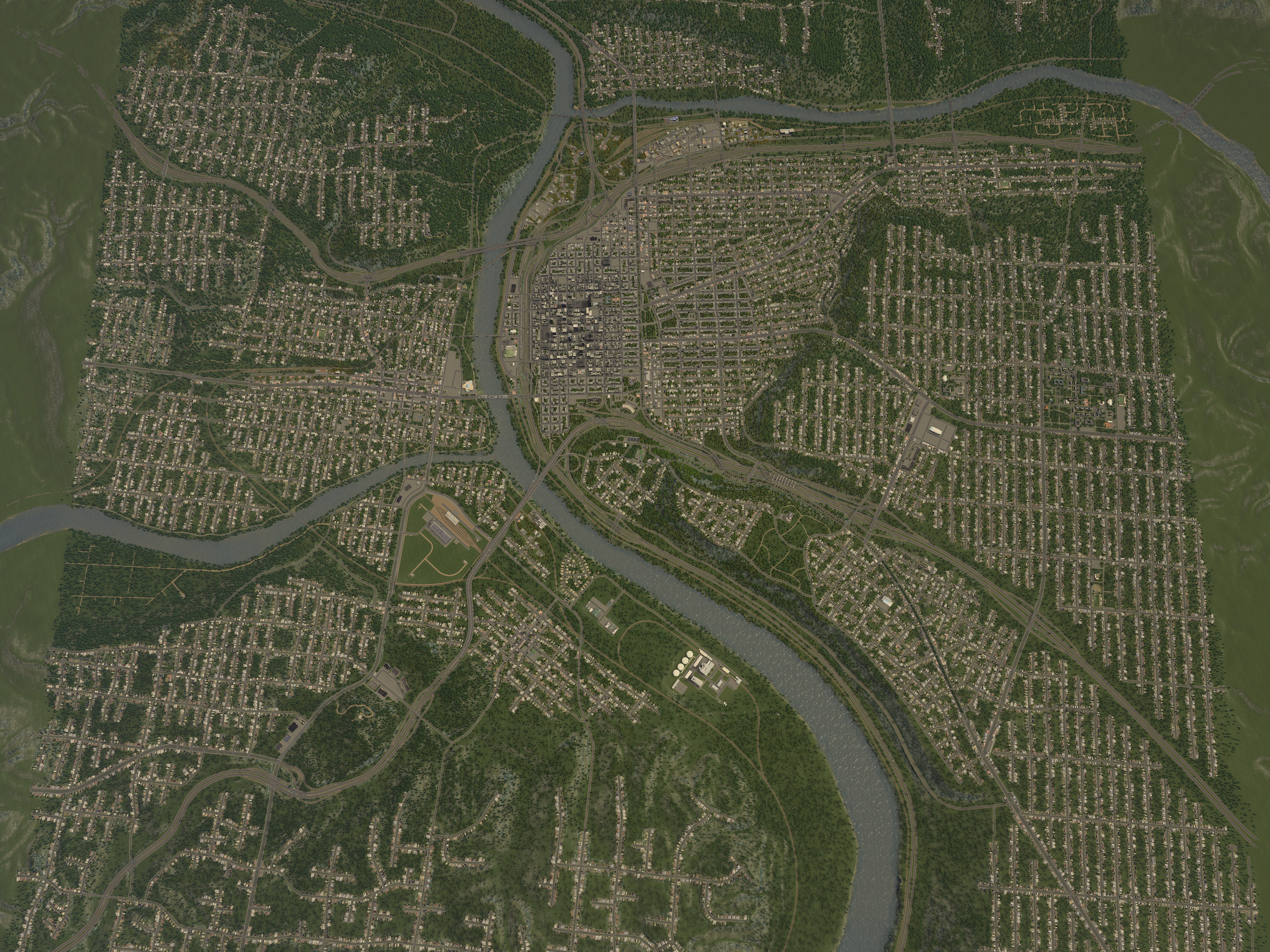 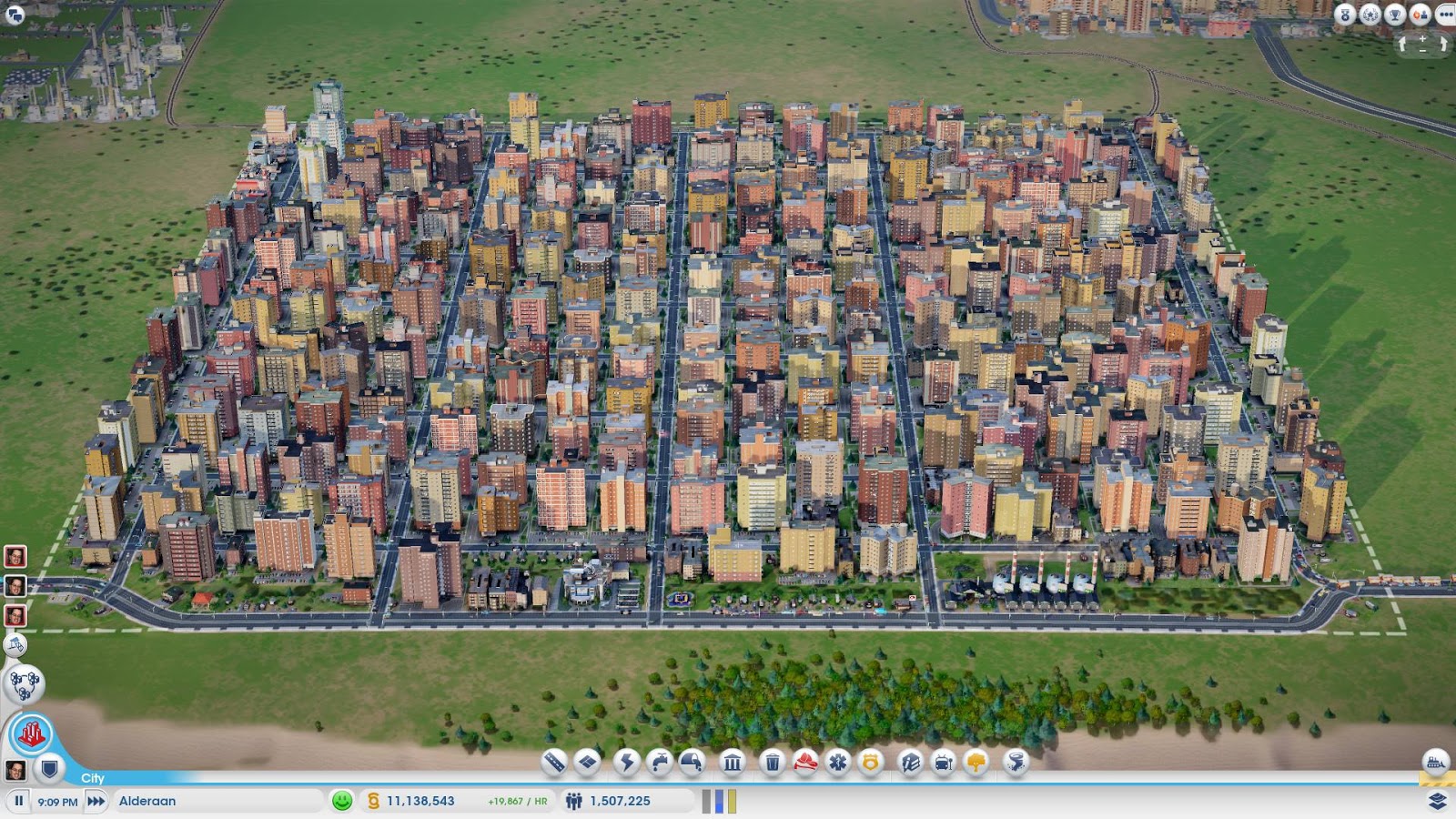 The Edge of Reality

Yeah that’s pretty much what killed the game for me. I remember having fun until I ran out of space, then I felt kind of dumbfounded like I couldn’t believe it happened so fast and I didn’t know what to do from there. The really terrible part is before I hit that point I was enjoying myself enough to buy the expansion. I don’t think I ever played it more than five minutes after that.

The idea of trying to make a massive-scale agent sim was hideously bad. The original Simcity approach of modeling blocks and projecting traffic needs based on them, and doing those calculations asychronously from the main control loop, was far better. And, because it doesn't matter if traffic updates run right now or thirty seconds from now, this approach scales to a fairly ridiculous degree.

To the degree that Skylines used agents, it was kinda messed up. The whole traffic situation in that game really sucks. The mods improve things quite a bit, but the traffic engine is just bad. Using agents for massive simulations is a bad idea. Stick with math and models.

I'm sure I was saying this a year or two ago, but it seems to me that using the kind of algorithms they used in SC4 and earlier, they could scale up to absolutely massive cities. The monster machines we're building these days, with eight cores and 64+ gigs of RAM, could handle running algorithms like that over a truly vast map.

Ever wanted to build the entire San Francisco Bay Area? You could probably do a substantial chunk of it on a modern machine, running algorithms from the 1990s.

I'm sure I was saying this a year or two ago, but it seems to me that using the kind of algorithms they used in SC4 and earlier, they could scale up to absolutely massive cities. The monster machines we're building these days, with eight cores and 64+ gigs of RAM, could handle running algorithms like that over a truly vast map.

Even threading the game such that the graphics/automata rendering of SC4 happened on a different thread than the simulation would go a long way.

Absolutely. If they could put all the various systems on their own individual threads (water, power, traffic, police, fire, sewer, garbage, like that), then it would automatically scale as core counts got bigger. If they were really smart, they could set it up to subthread as the load got higher; split, say, the water calculations into two threads, and then four, and so on, depending on the core count in the host.

Of course, writing those algorithms to be amenable to multithreading would probably be quite difficult. There'd be a lot of global state in a city-wide network, so keeping multiple threads in sync, without stomping on each other, would require a seriously talented programming team.