15 miles from the border.

I got out of the LEGO game and sold off 90% of my sets because I'm a baby-man with no self control.

I don't like that Lego NES set. It makes me feel gross and icky. I wish companies would stop trying to sell me my childhood constantly.

I don't like that Lego NES set. It makes me feel gross and icky. I wish companies would stop trying to sell me my childhood constantly.

I agree there is something squicky about how nostalgia has become a market category. And yet...

Statue of Liberty is a pretty fun build. The base has a lot of repetition, but it's easy to get into a groove while building it. The statue is very interesting how they basically build a center column with studs on the side, then build the figure around it. It's also very clever to see how they made it sturdy enough that you can actually pick up the whole thing by the statue and not worry that the base is going to snap off.

I think I like my alternative for the face. Instead of the shield piece, I used a 1x2 cheese slope for the brow, and a right and left 1x2 angled and curved piece for the face. I also made the neck one plate shorter, like they did in the video. 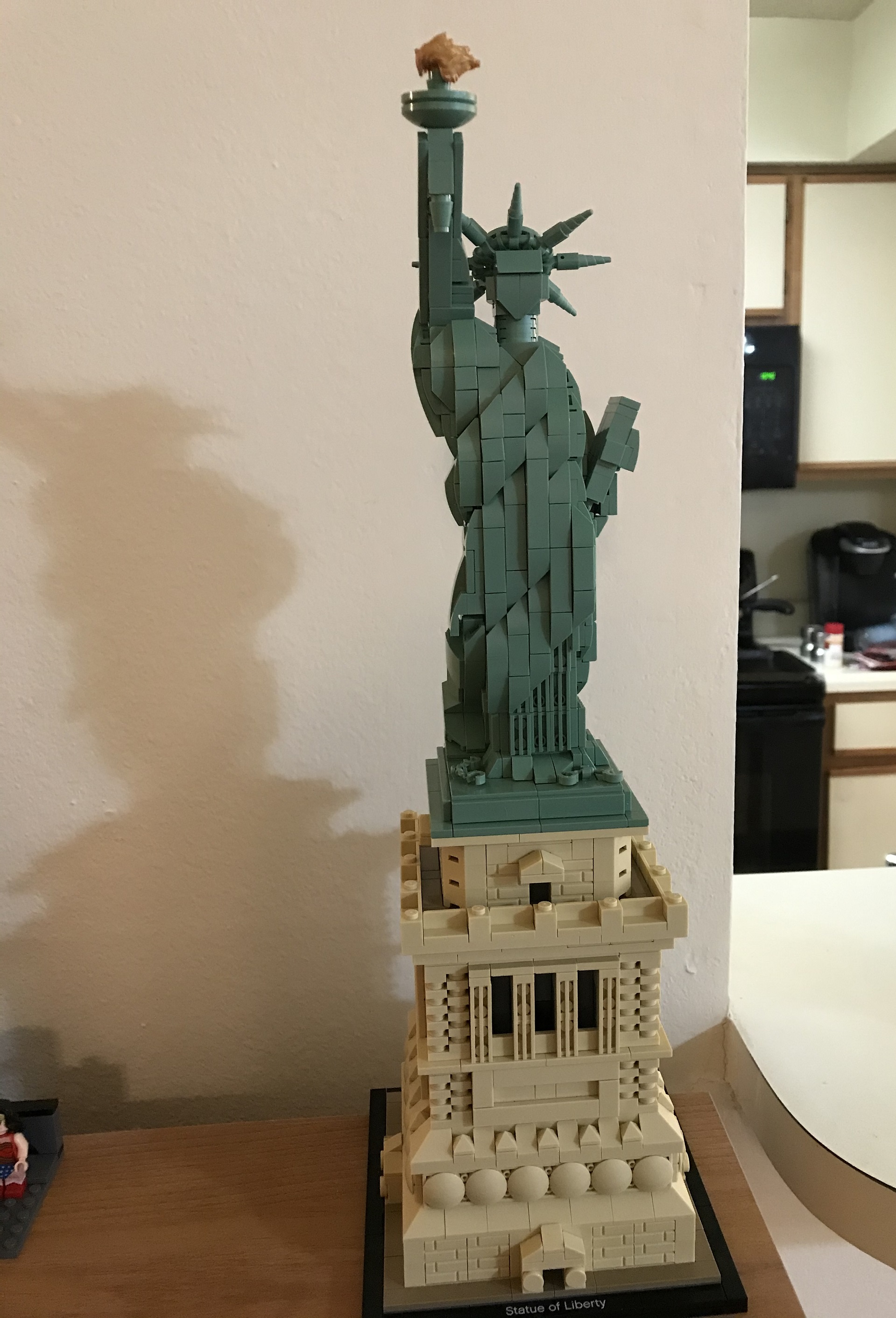 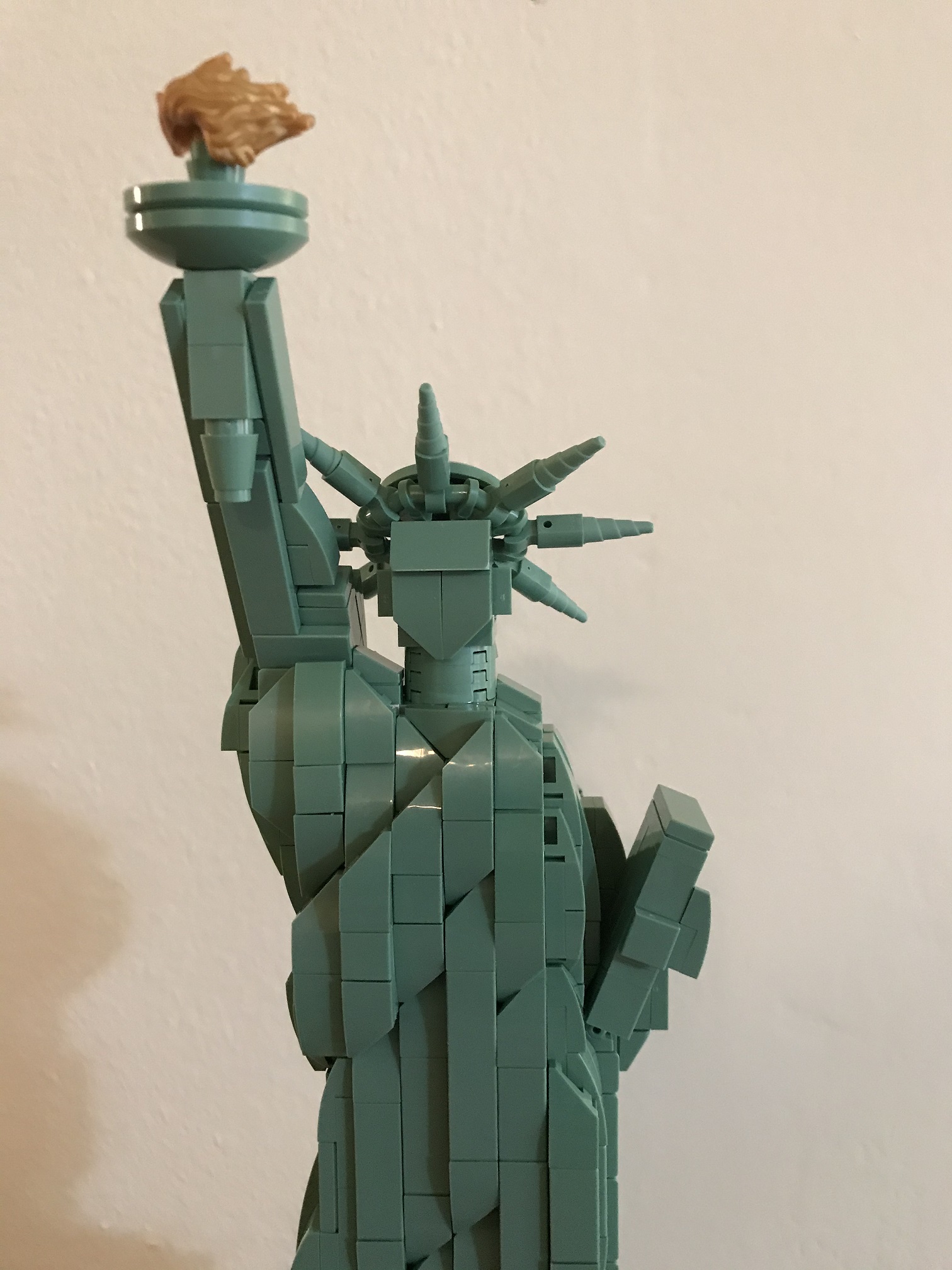 I dig, but in the bottom pic she comes off as all sorts of fed up with folks.

I dig, but in the bottom pic she comes off as all sorts of fed up with folks.

I see where you're coming from (and yes, perhaps that's appropriate). I think I misspoke when I said the cheese slope was the 'brow'. The way I'm picturing it in my mind is that's where the hair and the crown come together and the "face" is the 2x2 area below with the curved/angled pieces.

I wonder one 2 - 1 x1 quarter tiles would look like instead of the 1x2 slope.

edit: dang looks like that piece does not come in sand green but that would have ben the best I bet. Round 1 x 1 quarter is the piece name.

A couple more attempts to improve this: 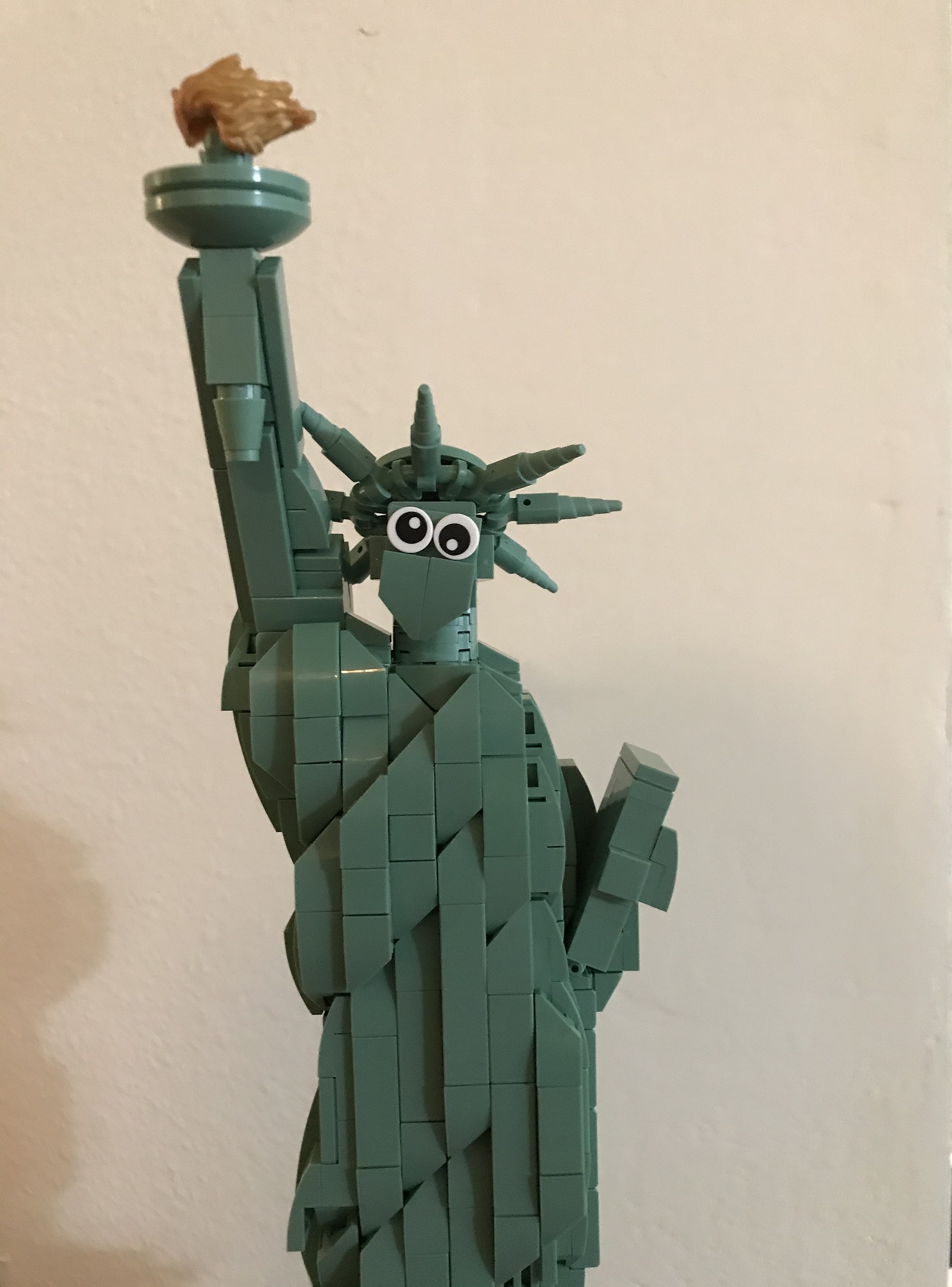 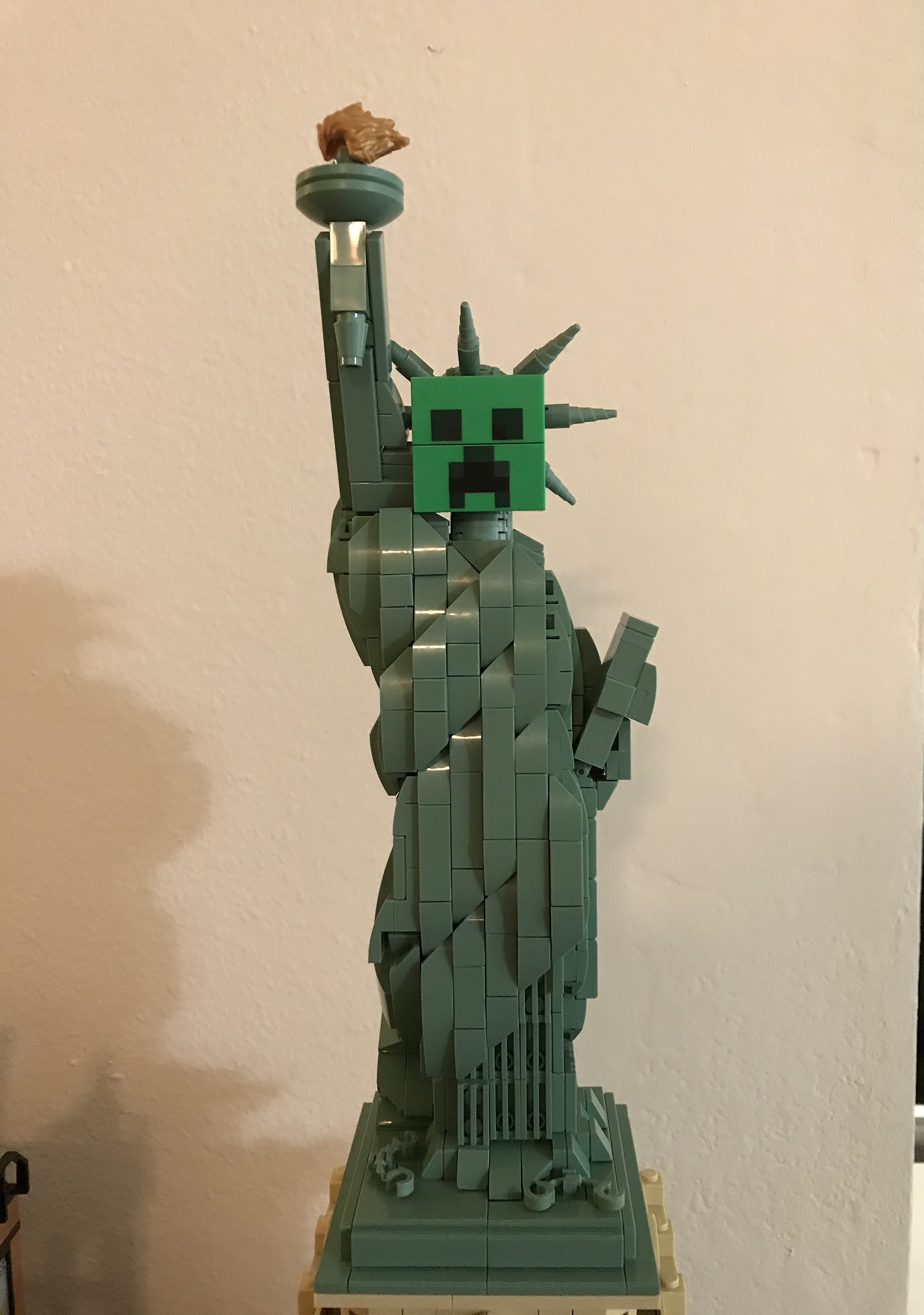 The googly eyes are amazing!

The creeper one does it for me.

We're all fine until she starts hissing.

It took him a month and a half, but my four-year-old finished up the ISS kit I got for Father's Day. I sat with him whenever he was working on it, but my role was basically helping him interpret the instructions, make sure he got the right pieces (he mostly did), and have him double check if he finished a step with a mistake. I also put together half of the big solar arrays and the rotating arm they go on, because it was a "do twice/eight times" situation, and I wanted to get him through this so he could start on the mound of age-appropriate kits he's getting for his birthday. 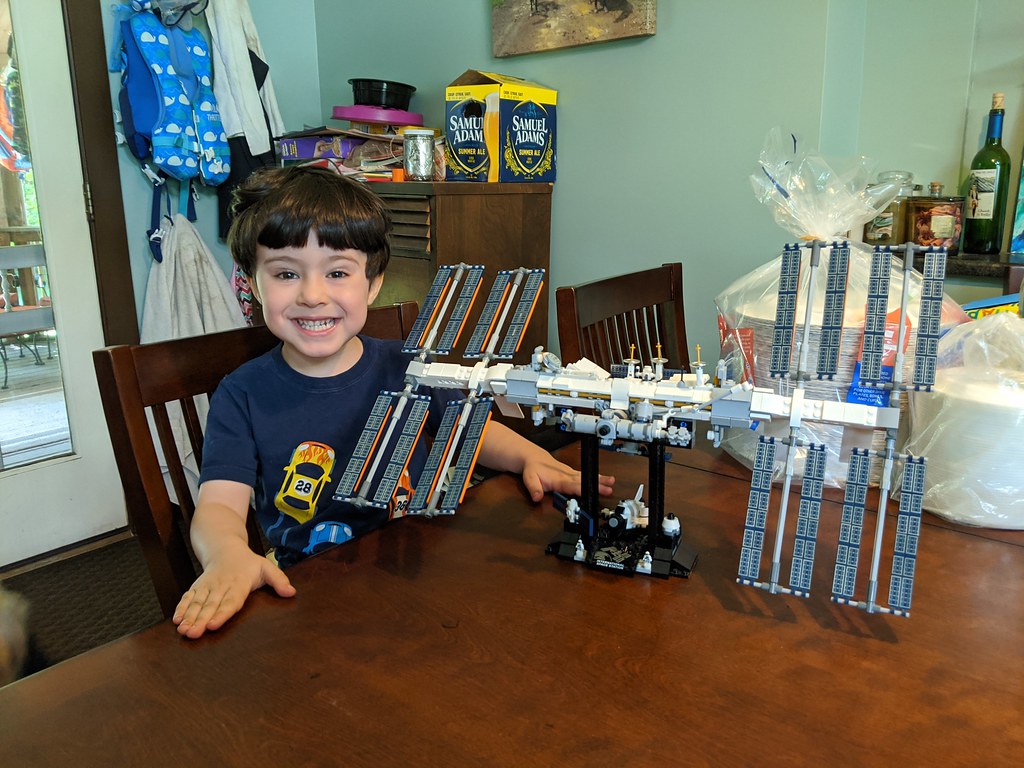 I like the finished product, but some of the assemblies were kind of awkward to get on, even for me. Also, who thought it was a good idea that the only attachment to the stand is four studs and two 1x2 grill plates? I might go back and add in some pin connections, because it's real flimsy as-is.

For his birthday, he's getting/got two of the smaller Hidden Side vehicle sets, and three or four of the 3in1 creator sets. He put together one of the Hidden Side ones already, and was able to do that one even more independently. We messed around with the AR app too. He likes it, but I wish there was a bit more interaction with the set itself in the app. Maybe there is if you keep using it. He liked shooting the ghost.

Next week, I get the haunted mansion for my birthday, and I'm definitely ordering the NES set as soon as it's up. Plus, I finally got around to sorting out the disassembled Bugatti. Now I need to decide if I'm more in the mood to just put it back together, mess around with the bits on my own to see what I can build, or look up some basic technics builds. I think I need to see some smaller things just to get a sense of techniques and possibilities. I'll also need to sort the pieces a little more too, I think. Right now, I've got all the gray and black beams separated by color and in two of the boxes, but that makes it real hard to find the pieces I need.

This makes me sad.

"The LEGO Technic Set 42113 Bell-Boeing V-22 Osprey was developed by us in relation to the aircraft's operations in rescue operations. The aircraft is mainly used for military purposes. We have long followed the principle of not designing sets with military vehicles. In this case, we have not strictly followed our own guidelines and high standards and will therefore review the plans to launch the product on August 1st."

So rename it the AW609, keep the rescue colors and call it a day...

I think the issue is they have a business relationship with Bell from this.

But my AT-ST is a military vehicle!

I realized I never posted this here. I did another RC mod, this time of the racing truck.

Dammit! I need to have that.

mortalgroove
Posted: July 23, 9:03 PM
For a limited time only

Oh yeah, I am super excited for the piano. And the typewriter. And the NES.

I'm excited about all these technical sets that aren't cars.

I love the complex Technic sets, and that looks like it has honorary membership.

I'm working on putting together the new Haunted House set, and this is the first set that I've really wanted to get a light kit for. Of course, the one I like best, that lights all the candles individually and doesn't use big green and purple lights everywhere, is $120.

The UX of LEGO Interface Panels

Jesus. I went to the LEGO store with my wife intent on buying the NES for my big Christmas present. But when I got there and saw it displayed, it didn’t call out to me. It wasn’t visually engaging enough other than the crank function and that alone just didn’t make me feel good about the price.

Ended up buying this instead:

Pirate LEGO have been my favorite since I can remember, and the fact that they’re making a return at all is very exciting. Dunno where I’ll display it.

We also got my daughter $90 of 2+ Duplo for her second birthday. Exciting LEGO times around our place.

mortalgroove
Posted: August 27, 10:26 PM
For a limited time only

Do you. That looks like a really fun set! And there is nothing like passing along the love of LEGO.