It was Father's Day last Sunday here in Australia. I finished putting together my gift tonight. Pretty happy with this one! 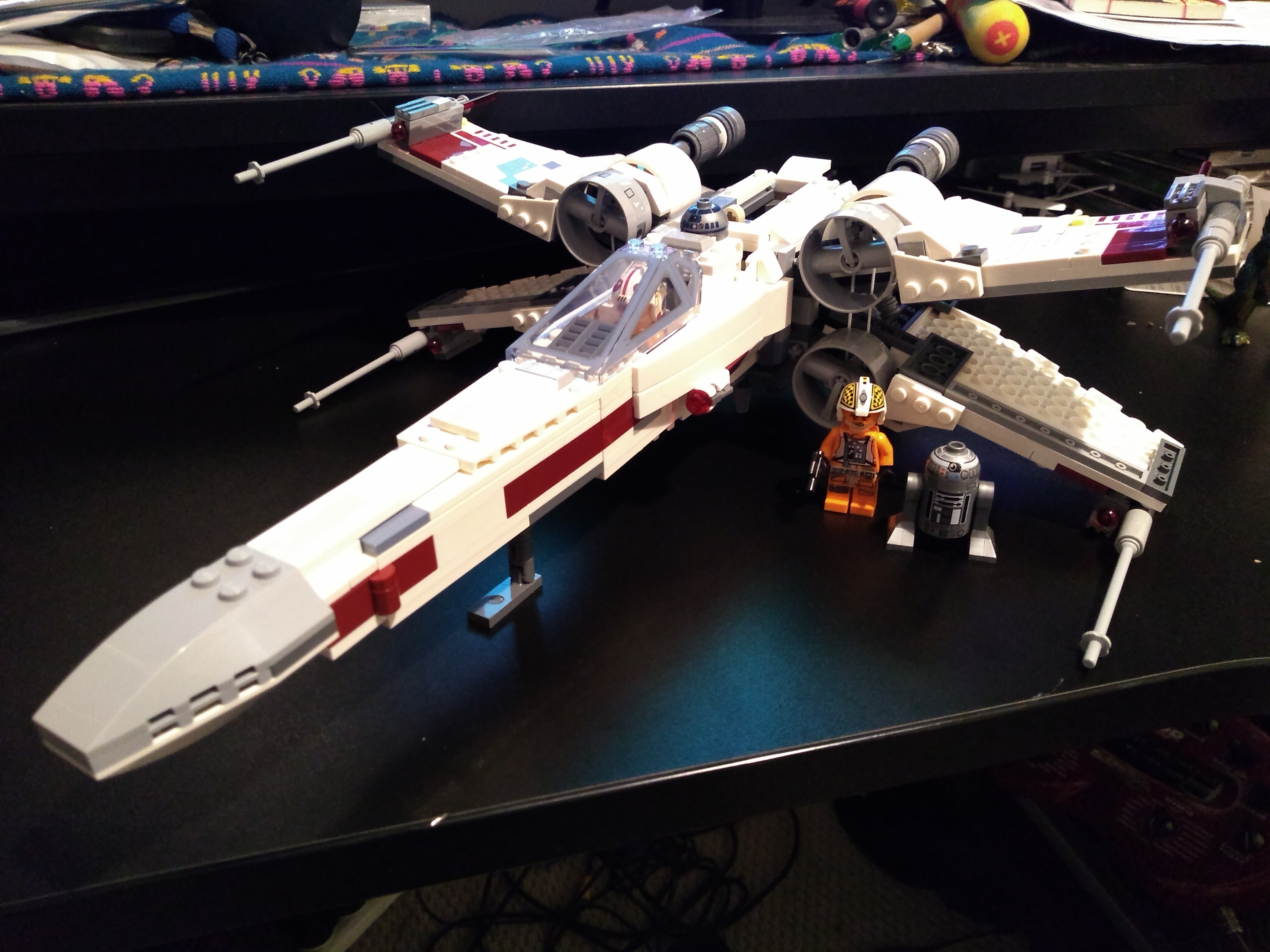 My favourite part of the Star Wars universe has always been the military aspect (unlike most people who love the Jedi/the Force), and I've always wanted to get into tabletop wargaming (although I've never had the time/money to do so).

Over the past couple of years I've been building up my collection to make my own Lego Rebel Alliance tabletop army.

It's about an company sized unit consisting of a mix of infantry and fast-attack vehicles. 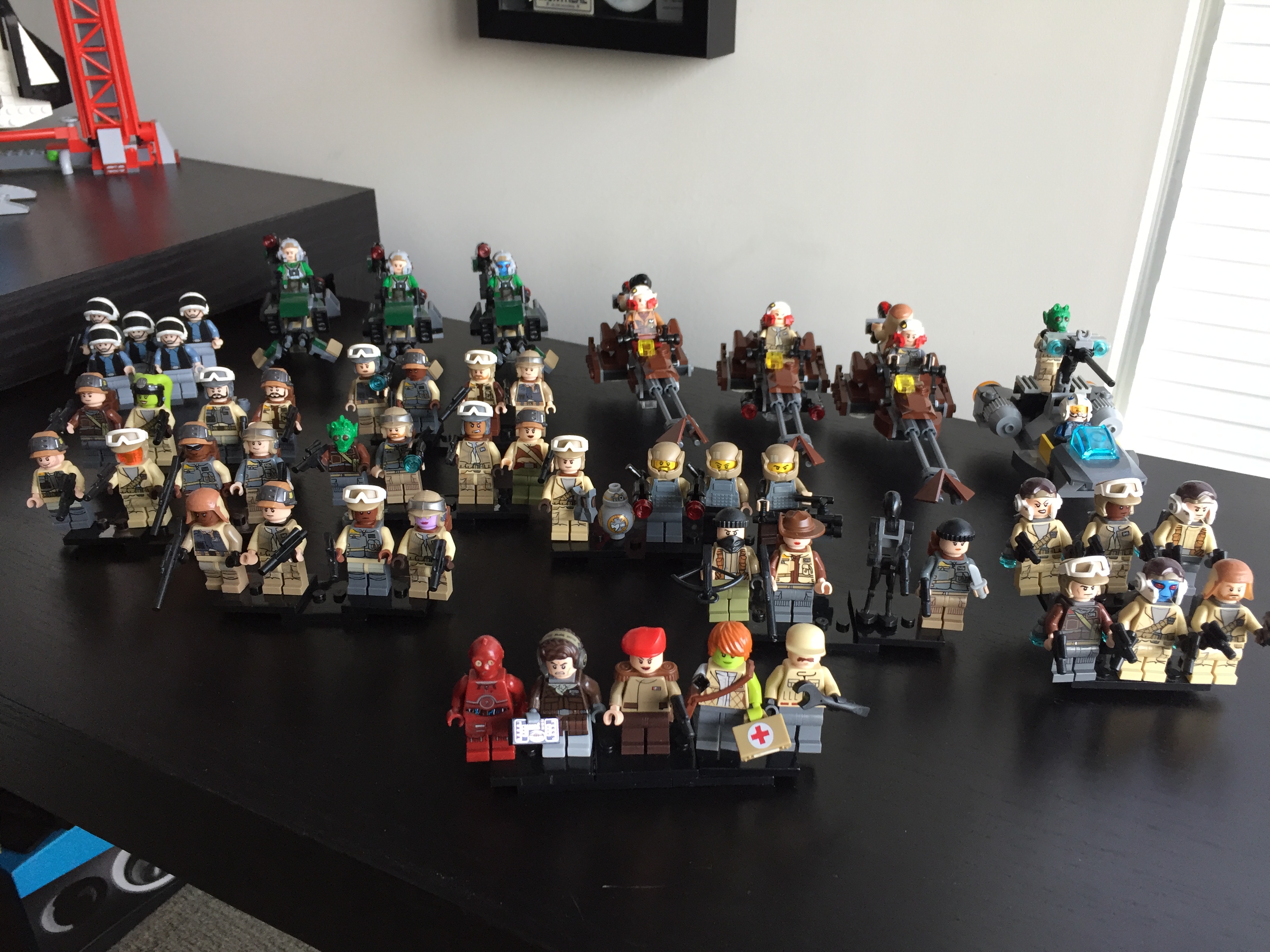 Each 4 man fireteam is made up of 3 rifleman and 1 specialist. Each rifleman is armed with a A280 semi-automatic blaster rifle and the specialist is armed with either a E-17d sniper rifle (designated marksman) or PLX-1 missile launcher (anti-armour)

The heavy weapons team utilizes some of the most advanced prototype technology the Alliance has to offer. Consisting of 3 heavy weapons specialists armed with 2 PLX-1 missile launcher's and a heavy repeating blaster rifle to lay down suppressing fire. Each heavy weapons specialist has heavy body armour and early-prototype blast helmets that would later be worn by Resistance infantryman over 30 years later.

Along with the specialists the team also consists of an spotter and an early prototype BB droid used for acquiring targets and triangulating trajectories. 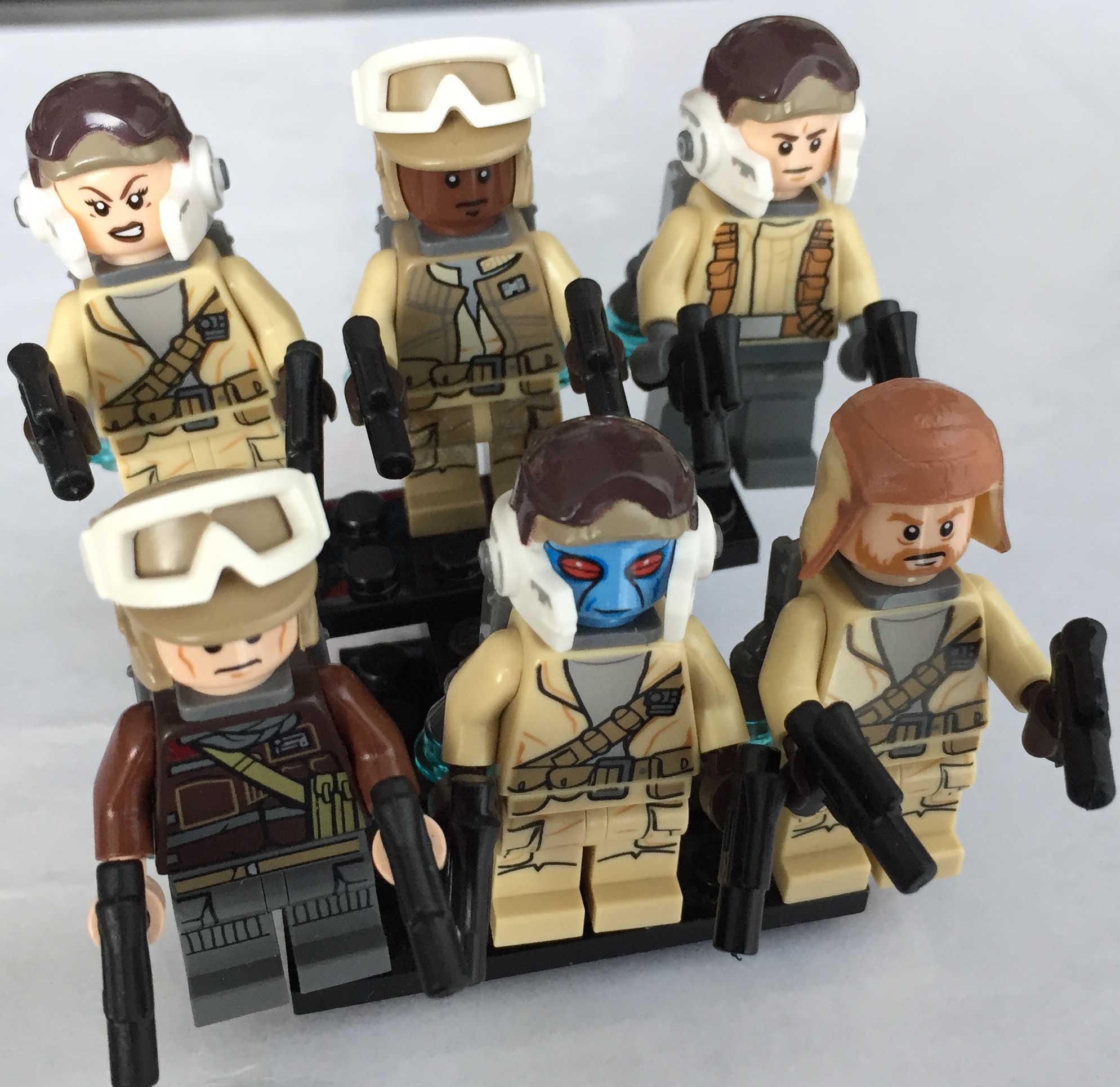 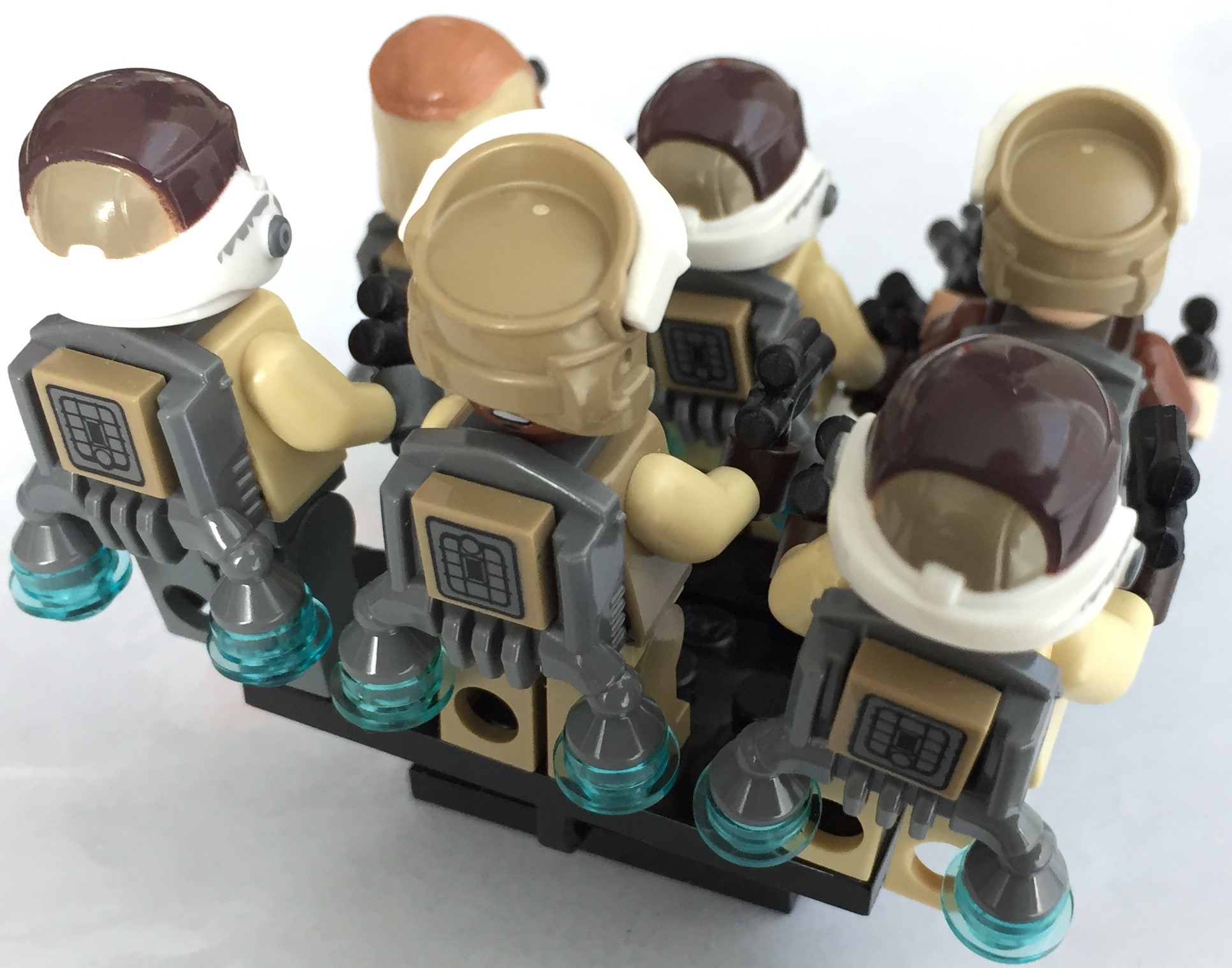 A team of 3 heavy swoop bikes. Two of them are twin-seaters with a rare facing heavy blaster cannon while another is a single seater with twin forward facing canons

A team of 3 armed speeder bikes. Each are armed with a single blaster to take on enemy infantry

The Rebel Alliance is always pressed to find armoured support, so the technical is the perfect stop-gap. It can't take on an AT-AT but it is cheap & speedy which is perfect for Alliance hit-and-fade tactics. A civilian speeder with a rear mounted repeating blaster. 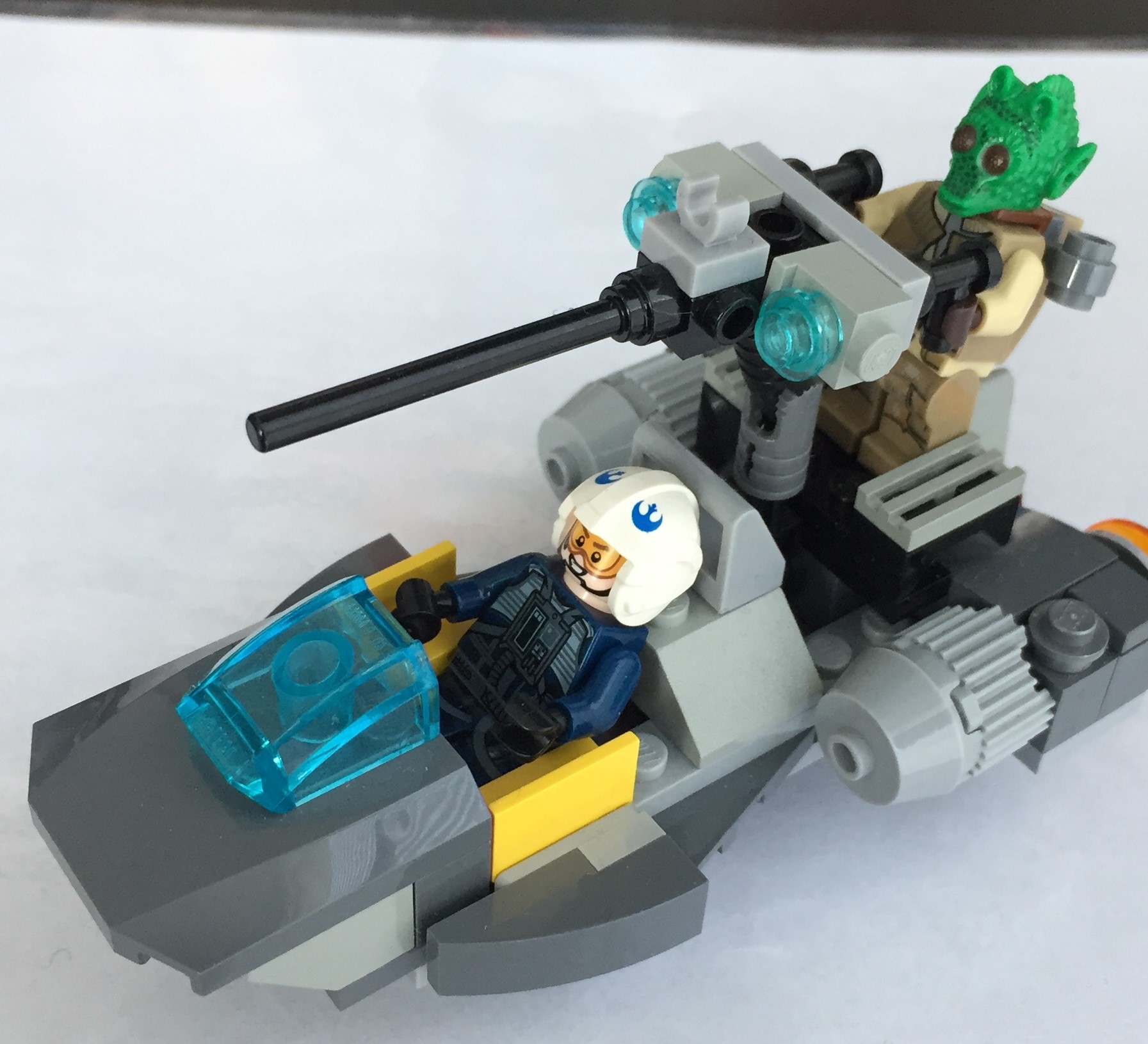 Security troopers attached to the Alliance Navy meant for security duties when the company is in transit and to act as MP's as the need arises. They are all armed with standard DH-17 blaster pistols 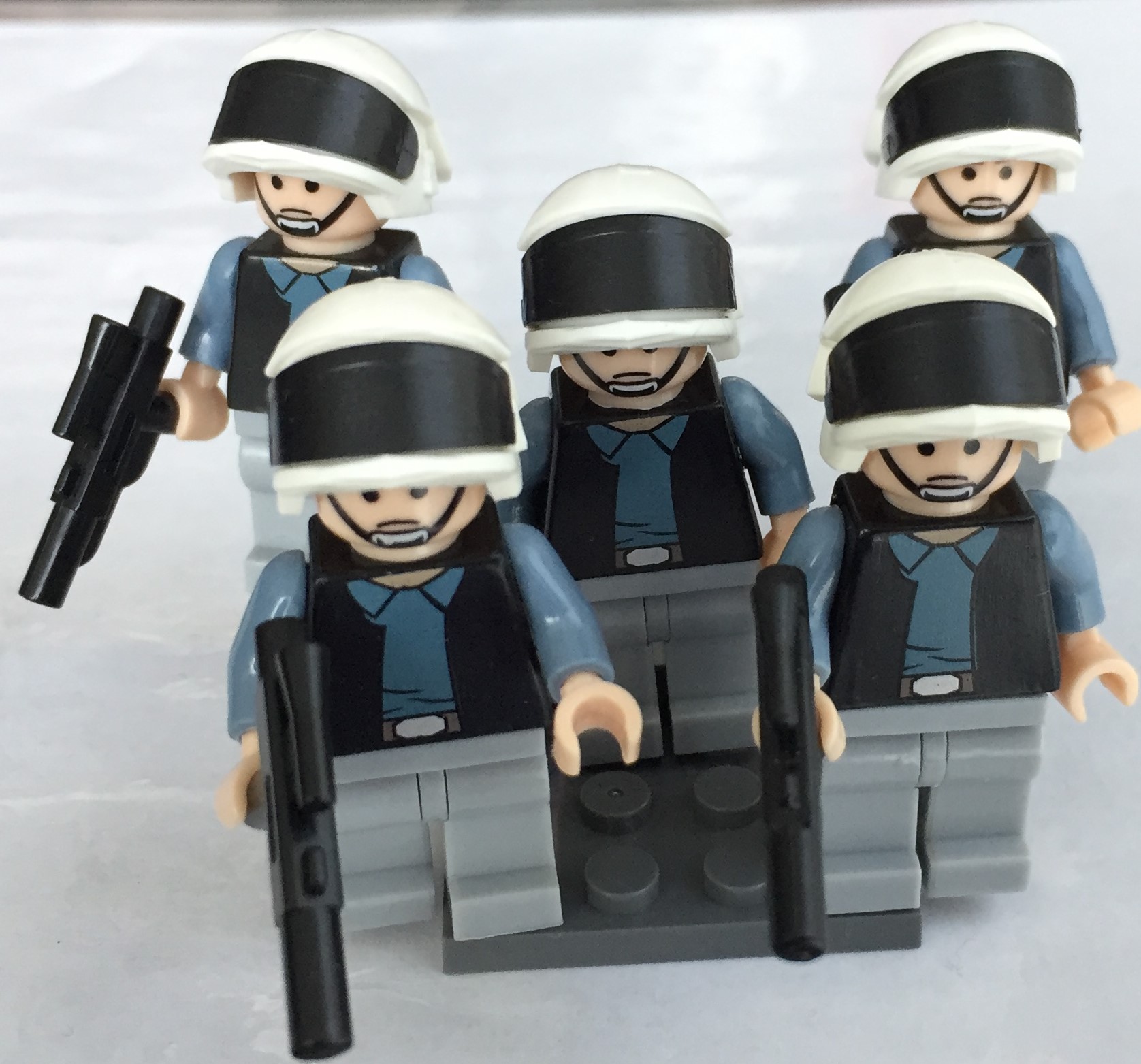 That's awesome! Are they all actual Lego parts? There are some helmets in there I feel like I haven't seen before, but I haven't seen everything Lego has released.

Does Mega Construx replace missing parts for free like lego does?

Does Mega Construx replace missing parts for free like lego does?

I found the request page. Unfortunately the part I need isn't listed. I guess they aren't as good with getting missing parts as lego is.

I always use Lego minifigs in tabletop RPG games also!

Random thing I learned tonight. LEGO redesigned the Las Vegas skyline set because it originally contained the Mandalay Bay hotel. They redesigned it following the gun massacre there.

I love this set, actually. I like the Architecture skyline sets in general and I think this one in particular has a beautiful characterization of the Bellagio.

On a slightly D&D note it also highlights a random way we accept gun violence as normal and move on.

Review of the Bellagio set here.

EDIT: Nothing to see here. Just a desperate race to finish the Saturn V after it has been mangled.

I was up to bag 6 of 13 when a deep inside piece fell inside the rocket, and I had to pull off quite a bit of exterior while trying to extract it.

I don't know where the errant piece came from or where it is supposed to go, but it was rattling around in there and I just couldn't have that.

I thought I could keep track of the exterior pieces, but it got weird, fast.

A little mangled, but we can rebuild.

I had a problem with a piece that was oriented wrong, in the first stage. It did not show itself until I was assembling the engine sections, so I had to kind of tear a hole in the side panels and pinch and pull to get it out and reorient it. Scary moment after when I realized I still had a handful of parts and no instructions as such, but I was able to get everything back into place by looking at the other armatures nearby.

Glad you got it sorted.

It is an amazing build, and with a few modifications, it would be a super technical Technic.

I don't know how to strip out the gif and post it directly. But it's about a guy creating audio and braille Lego instructions for blind kids. Super cool.

I picked up instructions for the Alien Xenomorph from BuildBetterBricks.com and the results were great. It's the first time I've tried non-Lego-made instructions. It worked out pretty well - there were a couple confusing parts in there but mostly it was as easy as regular Lego instructions. The worst part of the whole thing was actually using Bricklink to purchase the parts I didn't already have. I had to go through four different sellers, all in wildly different locations (one in Switzerland!), and the site itself is really confusing. In the end though it's an awesome model!

Wow, $12 for the instructions? How much did the parts cost you?

I like the acid hole in the floor. It’s a nice touch.

Daaaang! That's beautiful. I want it.

The parts I needed for this ended up costing about $50, including shipping (keep in mind I also already had about half the parts in my Big Lego Bin of Old Parts). Total spent was a little more than that too since I had to pad a couple part orders to reach the minimum limits on specific bricklink sellers. I'd say it was a bit more expensive in total than a regular Lego model from a box for its size, but that's probably due to the number of bricklink sellers I had to go through for the parts I needed, and all that separate shipping.

It ended up larger than I thought it would be, so that's cool. I love the acid hole in the floor too, it's such a great little detail!

Here is a video of the big excavator coming out next week.

The piano is definitely clever. I'm really excited, though, for the Sesame Street set.

Has anyone gone to a Bricks and Minifigs store before? We have one locally and I’m debating selling a couple of sets. I was curious what the process is like.

I have two Harry Potter sets where I’d rather have an Architecture set instead.