Man, I loved me some LEGO growing up.

Forestmen were my favorite range, particularly this set:

But my favorite single set was this one:

What were your favorite sets?

Oh man, I had a friend with 6276. That was the first and last time I saw the firing canons. I've always wanted them.

I used garage sale LEGOs. My mom and dad would by the occasional box at Child World, usually the space sets with the cool "clear color" pieces, but they found great bargains at garage sales, like $5 for a huge bucket or a random box of pieces. I made weird cars and buildings with odd colors, but I had so many pieces, along with Girder & Panel and Transformers and Matchbox cars. Insanity!

Made really tall buildings with that stuff, that always fell over.

I thought this might be a thread for some actual nostalgia. Those Legos were for that generation of kids born without imaginations.

Yeah, I'm just bitter the Legos when I was a kid were just Legos.

I had that set pictured up top, and a black castle too, and yes, they were bad ass.

The medieval (Castle, Wolfpack, Forestmen, etc) and pirate sets from the early 90's were getting pretty awesome but that's when I was getting out of Lego. The current Castle stuff is f*cking HOT though. I've bought a couple $30 Star Wars sets in the last few years (for decoration), but would love to have the money, room, and understanding spouse, to build some of those new sets.

The two castles I had were the Black Knight's Castle (thanks, QS, for triggering that memory):

And the Black Monarch's Castle, probably the most impressive big set I owned:

Everything else from those lines I had were small sets. I would have loved to have owned some of those big pirate sets too, like Haakon's 6276: that one looks awesome.

Here are a couple of my still-favourite City sets (that I recently re-built and then disassembled and put in separate ziplocks):

And just was I was growing out of Lego (ha!) I had gotten a couple of the expensive Model Team sets:

Browsing around sets from the 80's, here were a few of mine:

I'd better stop there.

Now that I think about it, my childhood was inseparable from Lego. My brother and I didn't have the tendency to keep sets distinct. We tore down the pieces and threw everything into six separate drawers in our rooms (The only exception was Haakon's favorite set. Yeah, it was pretty awesome.). From the pieces, we created an entire kingdom of senseless architectures. We filled it with heroes and villains, and rapidly switched our room's light on and off when a particularly epic battle between good and evil occurred. Our heroes went on increasingly ridiculous adventures in search of one obscure artifact after another. The villains always knew, and they always laid out sophisticated traps for the heroes, and they always lost.

When I was 8, my family went on a trip to Europe. A stewardess on the flight to Austria handed me and my brother a mini Lego set each, similar to the ones listed by tuffalobuffalo. We quickly assembled the vehicles according to instruction, and proceeded to tear them down to figure out cooler ways to use the pieces. We pooled our pieces together and constructed a sorry excuse of a mecha scorpion, and continued to find ways to "improve" upon the concept. The two little Lego sets ended up occupying a significant chunk of our time on that trip, until I accidentally dropped the whole thing on a train station platform. Its pieces scattered, some of which landed on the train track. My father looked at me, and said "Don't even think about it." I spent the rest of the trip wondering what happened to the lost Lego pieces.

I was a maniac for legos as a child, but only the castle sets for some reason. I never really became interested in the futuristic or present-day scenarios. Also, the castle sets often came with a glow in the dark ghost!

We never got one of those!

Franken-legos was definitely the way I mainly played with legos as a kid. My favorite things to make were gigantic land-crawlers with tons of wheels, rooms for people, and a huge window (made from lots of little ones) on the front.

I think we may have had some additional town sets from the same era, although none of the fancier ones.

Built some great stuff with those legos.

I almost went to Legoland in San Diego last year. I was really jazzed to go, picturing all the Lego I was going to buy, until we saw the price of admission, and that it's more geared towards being a rides-type theme park. So we went to the Zoo instead, and I got my photo taken with a gorilla!

The podcast "Stuff You Should Know" from howstuffworks.com did a great episode on LEGOS and their history.

My favorite were the Technics line of LEGO. I had several sets with pneumatic pumps and springs and eventually I created a small Mechwarrior 2 style Mech and the legs moved using the pneumatics plus springs as resistance so it would stand in any orientation. The top swiveled, had room for a LEGO guy and below the swiveling top was a space for a second guy with one of those green see-through shields that swiveled down so he could get out. I wish I still had that!

Slacker! I have those! They were my favorite. This thread is like drooling over the LEGO booklet as a kid all over again.

This thread is like drooling over the LEGO booklet as a kid all over again.

No kidding. I used to pour over the booklet that came with new sets when I was a kid. Honestly, legos were about my only toy as a kid. I had a few Ninja Turtles, but everything else was lego.

Just a few of the space sets I had - there were a fair number of the smaller sets. This isn't even beginning into all the castle, pirate, and technic sets. For the most part, I would build from the instructions once or twice, then disassemble and combine things into my own monstrosities, disassemble again into Monstrosity v2, v3, etc... or build elaborate bases, hidden outdoor forts, castles, pirate ships...

Yes, this was literally one of the first sets we owned:

This was my first Technic kit, or whatever that line was called:

Once the castles started coming out, we stopped getting any space stuff.

We used to have Lego wars with hit point charts, levels, dice, and arrow attacks were done by shooting rubber bands.

No kidding. Back before even the creepy articulated-arm Lego figures.

Here's a photo of where my poor Legos have taken refuge: 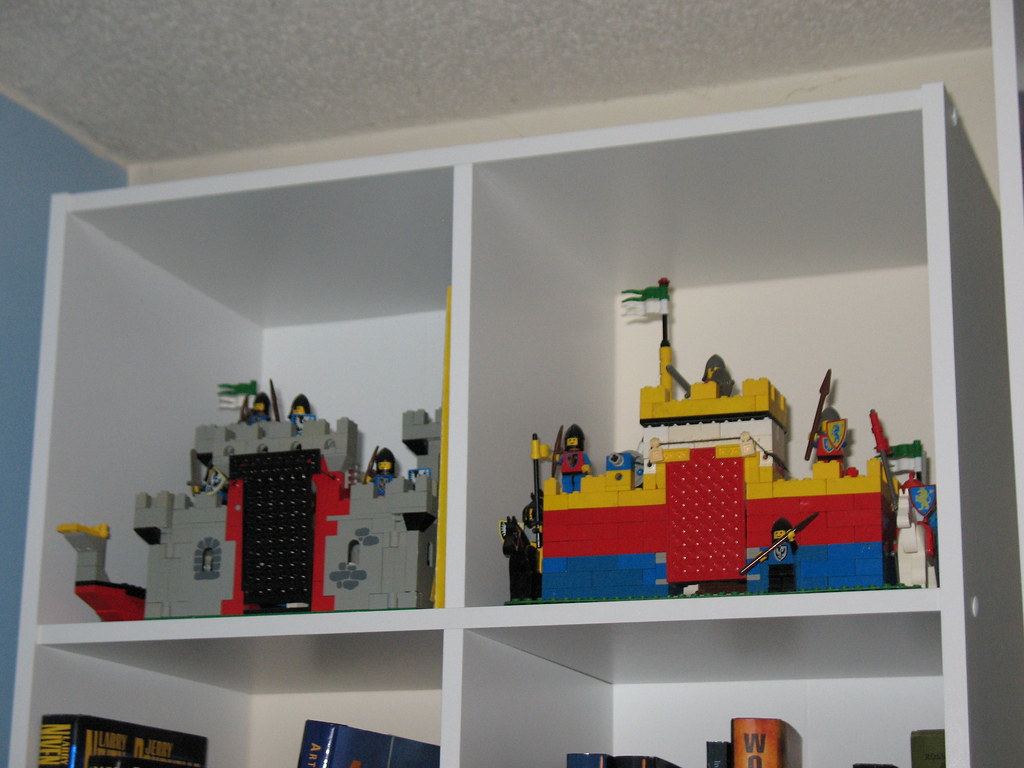 Oh man, so many of these (especially the older sets) are bringing back memories!

Like Quintin I also had the Knight's Castle. That was my first large Castle set.

My first set ever was the pic below and I remember getting it on Christmas at my grandparents. It was never one of my favorites.

I had plenty of other sets, but Castle stuff was my favorite ... and I still have everything.

Garion, my 12-year-old self wants to be best friends with you and come over every day after school and play with your copy of 6086 (possibly taking pieces of it home in his pockets each time).

Legos were just about the only "toy" I really liked as a kid. While my brother was hyped on the flavor of the year action figure, I was poised over catalogs for the newest and biggest Lego kits. Probably my fondest were the Space exploration lego kits, some of which people managed to drag up pictures of. All of the NEON parts were very iconic of the 80's and early 90's when they came out. More importantly, they combined the badassery of astronauts with Lego.

I was also fond of the large ships.

I know... it's the last great ship for all we know.

I enjoyed the old legoland town sets, with the shell station being a favorite. Mom & Dad bought me a few of the road tiles and that's all I really needed.

But my All-time favorite set was Forbidden Island and the Renegade Runner.

I loved the pirate sets...

That thing taught me patience, frugality, and the proper weaponization of gears. You can use the gear bar thing to spin one of the giant wheels so fast the centripetal force makes it fly off at little sister bruising speeds.

I love the bare-bones fiction implied by the various iterations of the figures. There's not really a lot there besides a name and a color scheme, and that is so perfect. Blacktron I's and II's, M-trons, Futurons, and Space Police. Beautiful. The imagined power struggles between the generations of old and new became my archetype for history.

I didn't get many super fancy sets, and I would usually only build the picture on the box once before getting creative. Space-ships and multi-wheeled crawlers were my standard go to constructions.

My parents found the few remains of my Lego a year ago and gave it to my 4 year old cousin. Part of me was heartbroken, the other is thrilled that she is apparently loving them.

The majority of our legos growing up were conglomerations of bricks for being creative, but I do have faint memories of knights and forest men. I believe that a friend of mine even had one of the large ships, which was very cool.

Other than various small sets as stocking stuffers through the years my last Lego set was the Victory Cup Racers set. I did something extremely crazy with it. After completing it, I placed on a shelf in its original form and did not proceed to come up with creative ways to destroy it.

AHH! I had that! I loved it! The launch rails and the prison, and the communication array. It was awesome.

Legos were just about the only "toy" I really liked as a kid.

Seriously, between Legos and books, I was some kind of addict.
I remember the Christmas that I got 6276 and it was definitely together before lunch.

Huh, those were my favourites too!

That's the other racer set I had, I couldn't find it last night! Just thinking about all of the sets brings back such good memories. The coolest part is my parents just brought out my giant lego tub... for my kids... yeah, for them