Malor
Posted: October 24, 4:02 PM
Discretion is not the better part of

Any amount of fuel they have left was expensive to get way out there, meaning they brought as little as they could get away with. They need to get back to Earth, but they can't just blast straight here. Even if they had oodles of delta-V (fuel) and could afford that, they'd arrive moving so fast that the probe would pretty much pancake against the atmosphere and vaporize. They'd need even more fuel (and mass) to slow back down again before attempting re-entry.

So not only do they have to get back to Earth, they must also get back to Earth at roughly the same speed Earth is traveling. They generally will do that with a specific kind of orbit called a Hohmann transfer, which is generally the lowest-energy orbit to move between bodies orbiting in the same plane around the same center point. (in this case, the Sun.) Their major downside is that they're quite slow.

Once it arrives in Earth's reference frame, it will start falling toward the core of the planet. It will fall for something like a half-million miles, very slowly at first, but faster and faster as it gets deeper in the gravity well. When it hits atmosphere, it will be going at least 17,500 miles per hour, and all that speed has to be shed. Any residual speed from the solar orbit arrival gets added to that total; it must also be bled away safely. If the probe arrived in Earth's gravitational field at a relative velocity of 2,000 miles an hour, re-entry will now be ~19,500mph, meaning the heat shield will get much hotter, meaning it needs to be both better and thicker. (second edit: they can use any residual fuel to slow the approach a little, and tune their re-entry angle to match their heat shield capacity, but they definitely won't have 17,500 mph of delta-v left.)

A slow return orbit, in other words, means two things. They save a ton of fuel, and arrive moving slower. That means the final re-entry is slower, which saves on heat shield cost and weight.

edit: as Hrdina points out, if the orbits aren't in the same plane, that adds more complexity. They're probably not going to change the probe's orbital plane (which takes oodles of fuel), they'll be trying to intersect Earth just as it's crossing their orbit, meaning that the timing has to be exact. Transfers between same-plane orbits can be quite sloppy, but different planes mean they have to merge right at the crossing point. If they're early or late, they miss, and lose the probe.

Possibly because Bennu's orbit is tilted 6 degrees from the ecliptic relative to Earth's. From watching this video of the return trajectory, it looks like it's a matter of timing to catch Earth just as its orbital plane crosses the plane of Bennu/OSIRIS REx.

The return window to Earth also doesn't open until March 2021, so there's going to be a bit of waiting before the journey home even begins.

And when it does OSIRIS-REx isn't exactly going to be lighting off a massive rocket engine. It's going to fire four tiny hydrazine rockets, each of which is only capable of generating a couple hundred Newtons of force. And it will have a very limited amount of fuel left. It launched with about 2,800 pounds of hydrazine and burned through quite a bit getting into position around Bennu and maneuvering.

Possibly because Bennu's orbit is tilted 6 degrees from the ecliptic relative to Earth's. From watching this video of the return trajectory, it looks like it's a matter of timing to catch Earth just as its orbital plane crosses the plane of Bennu/OSIRIS REx.

The return window to Earth also doesn't open until March 2021, so there's going to be a bit of waiting before the journey home even begins.

That makes sense, since they left open the possibility of making two more attempts to collect samples.

Also, here's an image of the sampler head from this article on Spaceflight Now.

I've been following the journey of OSIRIS-REx and watched the live stream of the landing and collection. It's concerning news reading the reports of sample loss but after reading the in-depth article on Spaceflight Now, I'm more confident the spacecraft will return with the goods. Thanks Hrdina for the link!

mortalgroove
Posted: October 24, 5:46 PM
For a limited time only

Cool video! Thanks for posting that Hrdina.

Thanks Hrdina for the link!

Cool video! Thanks for posting that Hrdina.

Here's some more information from Scott Manley. He has a couple of things in this video that I hadn't seen anywhere else.

1. There is some concern that they will have difficulty stowing the sample container into the re-entry vehicle because of the excess material.
2. They didn't feel as much resistance from the asteroid as expected, possibly indicating that the probe just plunged a half meter into the surface!

Nothing weird about finding a new molecule near the outer reaches of our solar system. That's never been the central element in a work of science fiction.

I think they should just start calling it by its true name: protomolecule.

Nothing weird about finding a new molecule near the outer reaches of our solar system. That's never been the central element in a work of science fiction.

I think they should just start calling it by its true name: protomolecule.

It's not new, but it is pretty interesting. Nice. There was concern about this because of the large quantity of sample causing leakage, yes?

Signed, sealed, and now we wait for delivery! Provided anyone is alive on the planet to open it.

We will probably become the Eloi and the Murlocks if things keep on trend by the time the capsule returns.

Happy Holidays from the NASA Galaxy of Horrors. 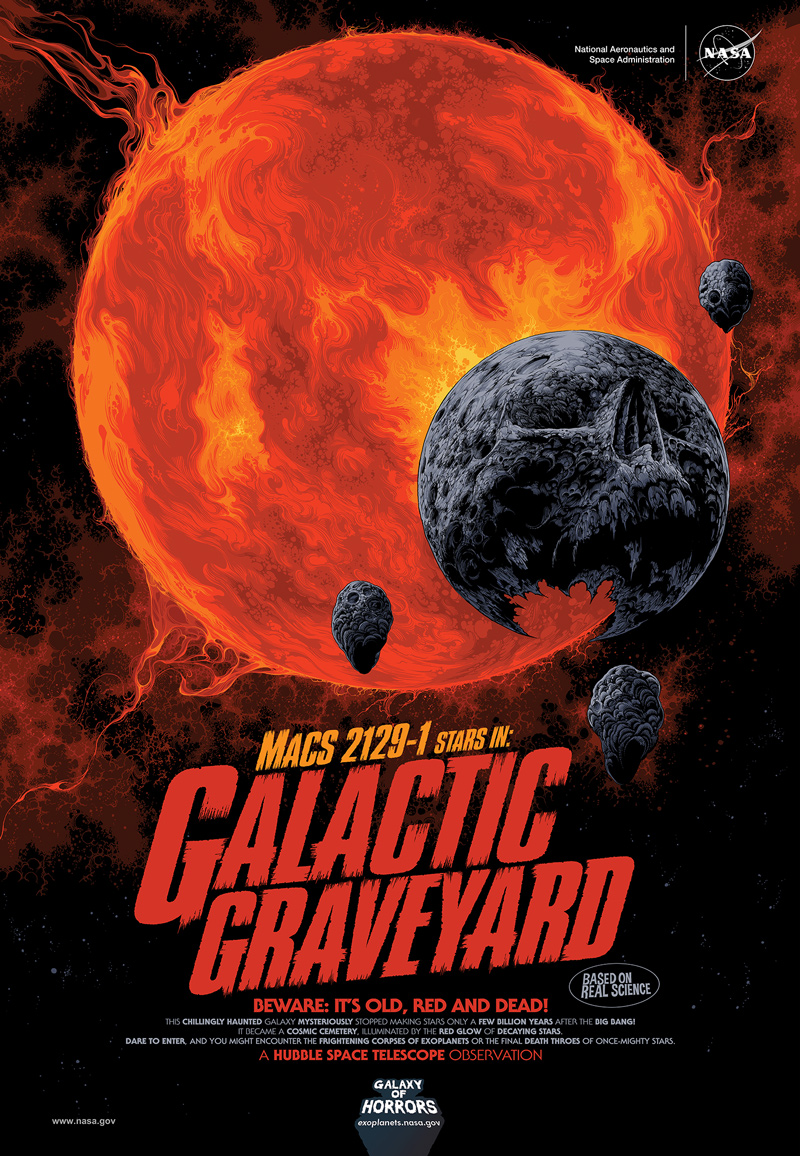 (more at the site)

These are AWESOME. I'm going to see about getting some printed for my kid. 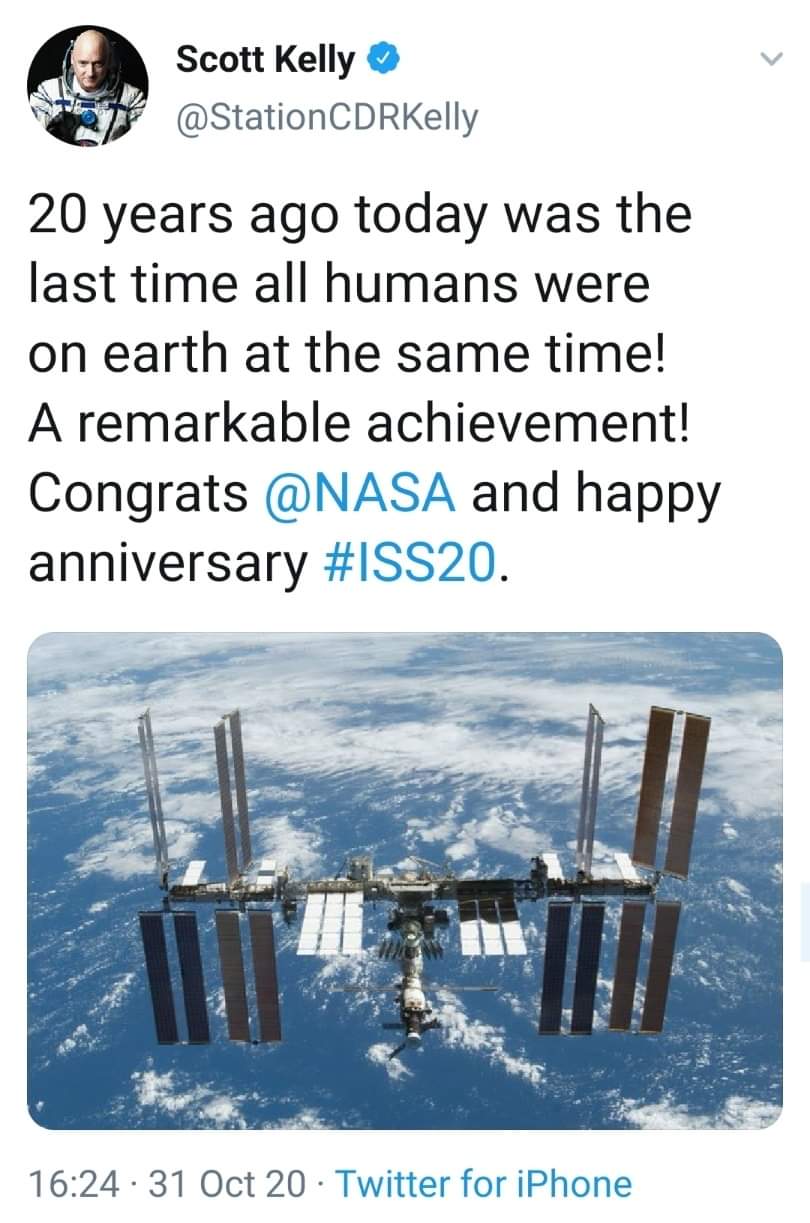 Here is a different view of the TAG sample acquisition (from Bad Astronomy).

mortalgroove
Posted: November 4, 6:04 AM
For a limited time only

A perfect distraction. Thank you!

Malor
Posted: November 15, 9:57 PM
Discretion is not the better part of

Note that's the first actual, routine crew launch to the station: the first one was officially an experiment. Now they're starting production.

They made a few changes since the last time; they found more burn-through of the heat shield than expected in one area, so that section has been thickened a little. And they've updated or replaced the barometric sensors that trigger the chutes.

They've also found and fixed a separate 'lacquer' problem, where a supplier had left just a tiny, tiny bit of lacquer on a metal part that stuck a valve open inside the engine and caused a launch abort. Several new engines needed to be fixed; all the used ones were fine.

I imagine Words Were Had with the supplier.

It was a very cool launch! I'm glad everything so far seems right on target. Wooo!

NSMike
Posted: November 16, 1:46 AM
NS Stands for Not Straight

So glad it went well. I am way anxious about commercial spaceflight with people on it.

Since they are contracting for NASA, they have to meet or exceed NASA human flight standards, so really, it's no more dangerous than NASA flights will be. And possibly safer, given the reuse of proven boosters.

If anyone sees this in the next few minutes, Dragon is now attached to ISS and Kate Rubins is working to open up the hatches.

deftly
Posted: November 21, 3:52 AM
It Burns When I Everything

In 2020 news, the iconic Arecibo radio telescope is to be decommissioned. One of the support cables over the dish detached, and a second one later snapped, making it too hazardous to repair.

I just started reading Contact a few days ago, too.

Very cool launch of Copernicus Sentinel-6 (Michael Freilich) from Vandenburg AFB in California, including the booster returning to land at the launch site.

If you don't follow the ESA channel, they have a weekly series "Earth from Space" that features images from earlier Sentinel spacecraft.

Okay, so apparently the CNO fusion cycle has been confirmed by a solar research satellite as the source of the sun’s energy. Does this finally put the stake in the chest of the Electric Sun theory?

The “Electric Sun” and “Electric Universe” hypotheses hold that instead of long-running nuclear fusion, energy in the universe is primarily electric in nature, having to do with the interaction of magnetic fields, plasmas and such. Because neutrinos from the sun are hard to capture, there was always the possibility that this could be true.

Why do people argue this? Well, outside of a few plasma physicists who are willing to speculate in astrophysics, if the sun and stars don’t have to spend billions of years developing fusion processes, then universe could be a lot younger than it seems. Like, it could all have been created, I dunno, a few thousand years ago, with the *appearance* of age. This matters to some people who want to make their beliefs into “science”.

I’m hoping that this and some other recent advances will finally kick this misinformation in the head, once and for all. But these “theories” are notoriously hard to kill. I’m wondering what our physicists and astrophysicists think.