If you guys want this consolidated into the catch-all then that's fine. I have seen some awesome things so far in GW2 and thought it deserved it's own thread.

After falling off a cliff and ended up in a level 15 area (at level 10) I saw an enormous ... thing ... in the background. I get up close, and this is what I start fighting!

Now granted I am only level 10, but if at lower levels you hit cool stuff like this then I'm extremely excited to see what's to come! After it died (probably 15 minutes or so) this is the chest that remained. Lots of good loot too!

My favorite BAM (to borrow from TERA) is the giant shark event in the Asura newb area.

Screens will be forthcoming of my characters and the scenery eye candy.

My favorite BAM (to borrow from TERA) is the giant shark event in the Asura newb area.

Screens will be forthcoming of my characters and the scenery eye candy.

Heh... I had my back to that when it first appeared and it scared the crap out of me. Thank you Jaws for the shark phobia.

I'm on the lowest settings (what my laptop can handle), but I still find the game gorgeous. Also a fan of the sylvari mesmer look and greatsword so far.

That's pretty cool how your skin blends in with the sky Aeazel.

Here's one of me on top of the pyramid at the Rata Sum docks. I love trying to get places I'm not supposed to be

Just hit 40 so I thought I'd celebrate with buying some Ebon Vanguard weapons with Karma. Below are the pics.

No fair! I had to go back to work!

My run in with the swamp encounter

My problem is that I usually forget to take a screenshot when I see something cool. 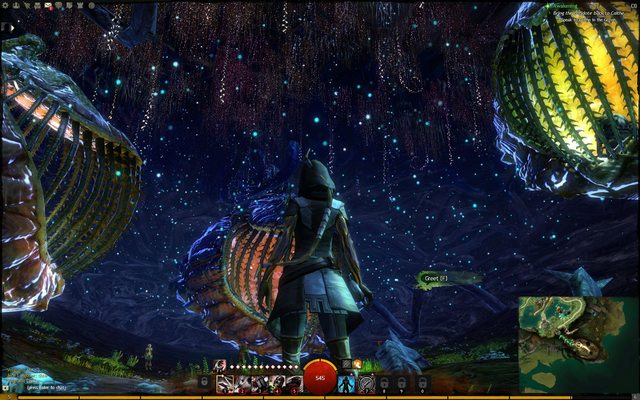 Thought this area was pretty cool in the Sylvari home city. Those are cages ... I think.

I did the swamp encounter as well. was my first big group encounter and loot chest at the end. Lots of fun!
I also forget the whole screenshot thing.

My first loot chest encounter was an enormous worm in the Sylvari starting area. I didn't grab any screenshots but it looked like all the other worms, except really, really, big. The funny part was that nobody in the area seemed to be expecting it, so we were just happily killing some big Nightmare Court bad guys and suddenly this monster worm bursts out of the ground and everyone starts freaking out in chat.

Thought this area was pretty cool in the Sylvari home city. Those are cages ... I think.

If I weren't already playing I think that screenshot alone would get me on board.

After hitting 40 and picking up my racial weapons and armor:

Taking my necro out for a hike with some guildies: 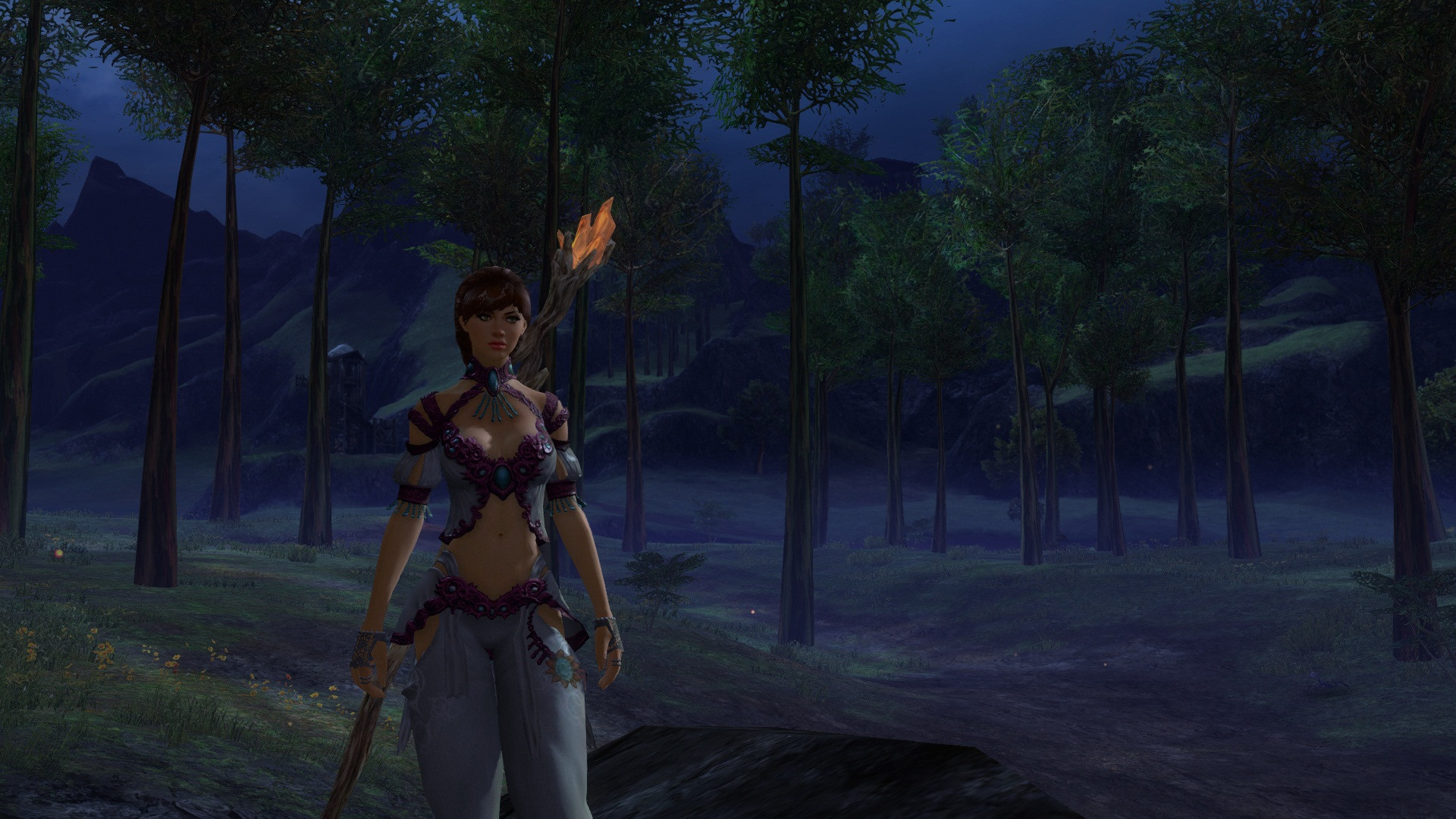 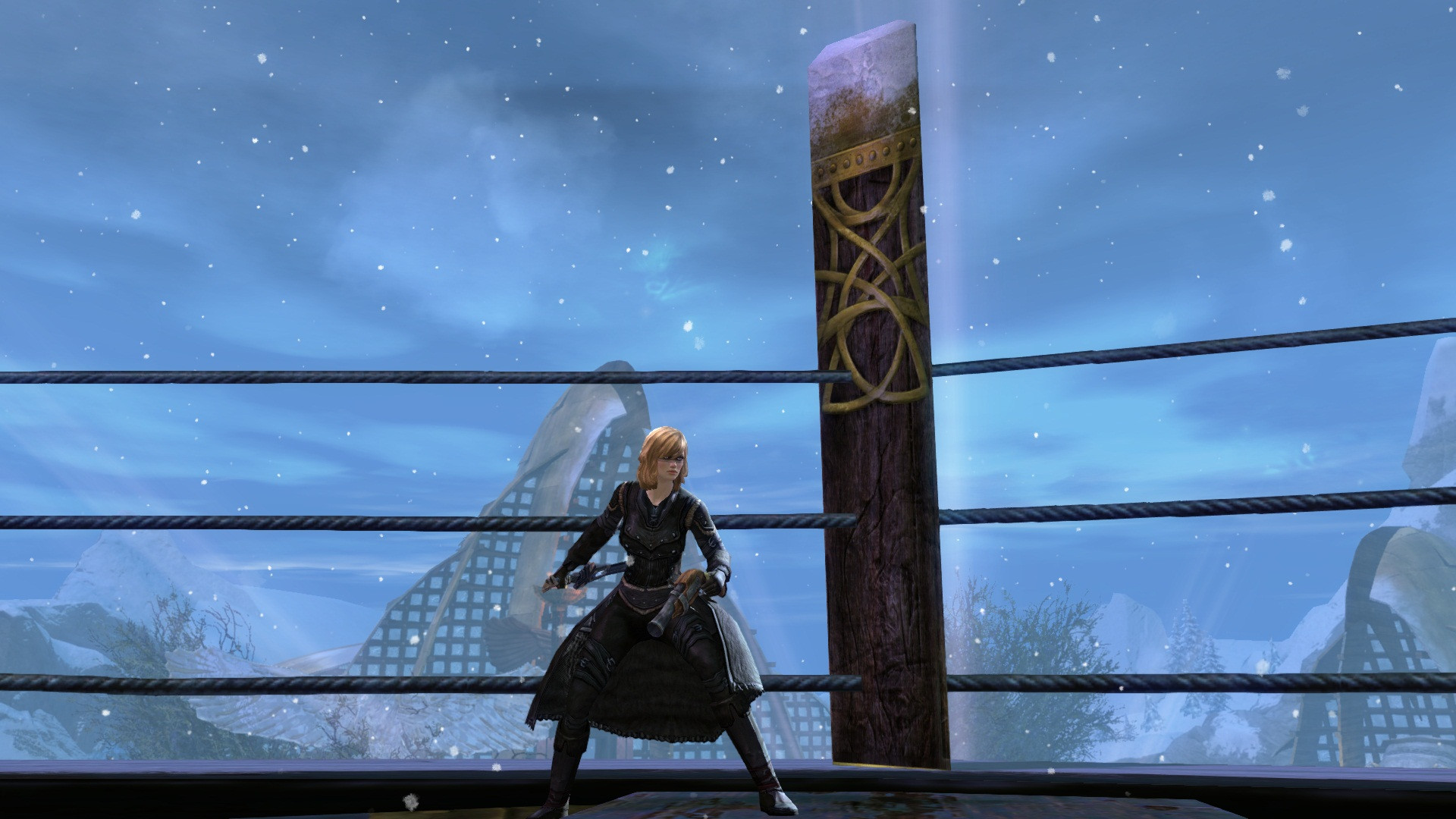 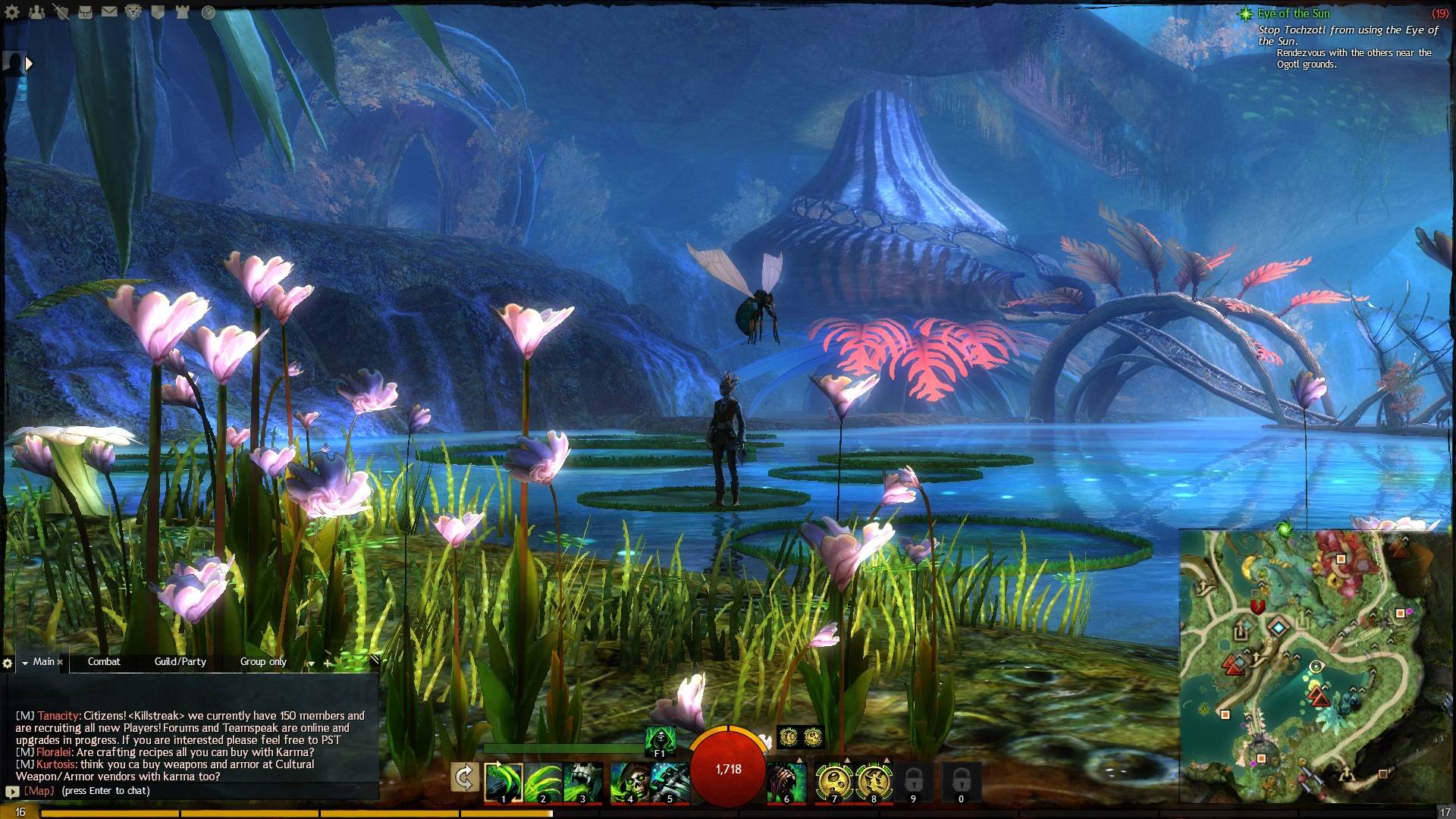 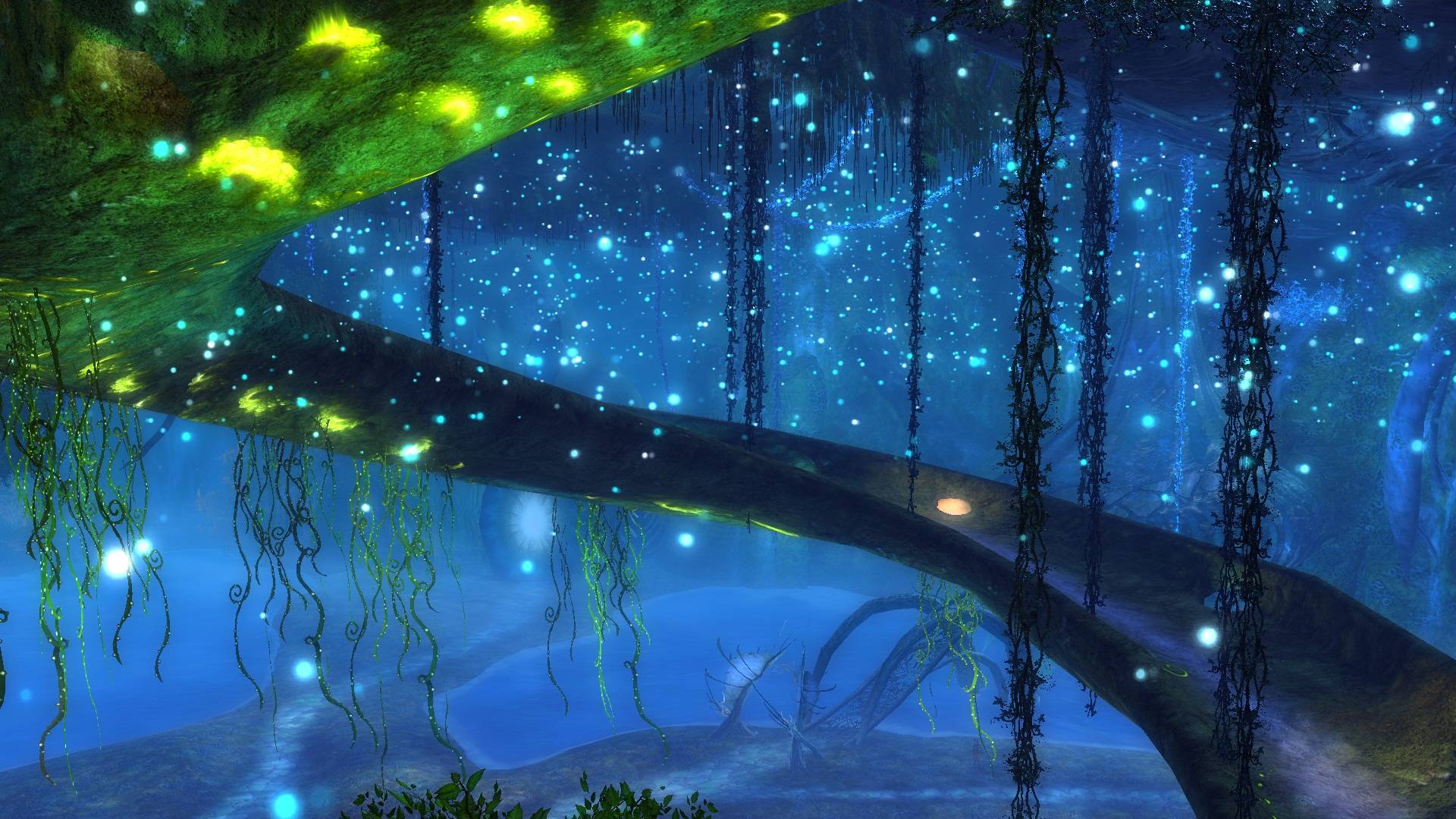 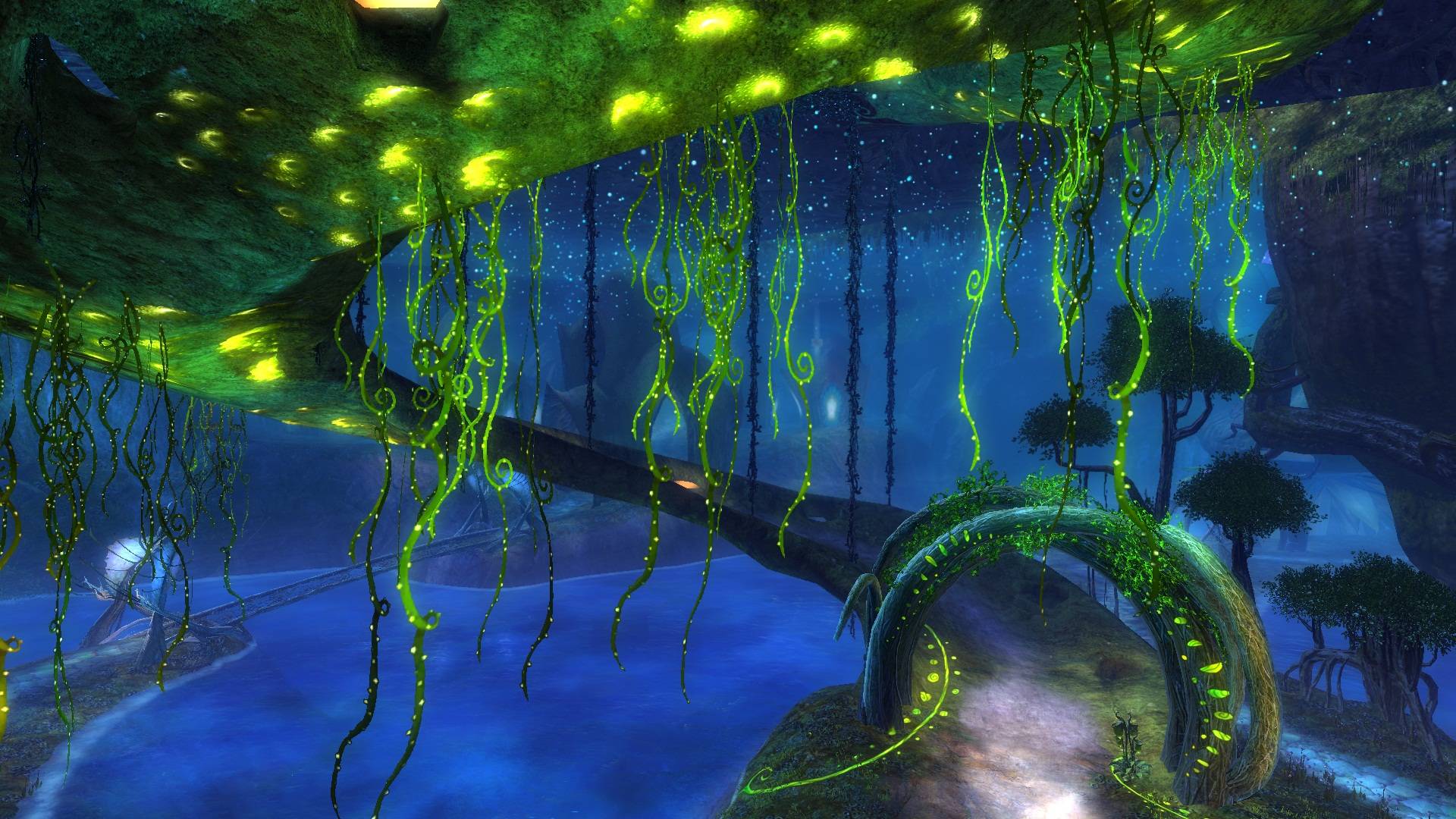 And finally, goofing around up high. 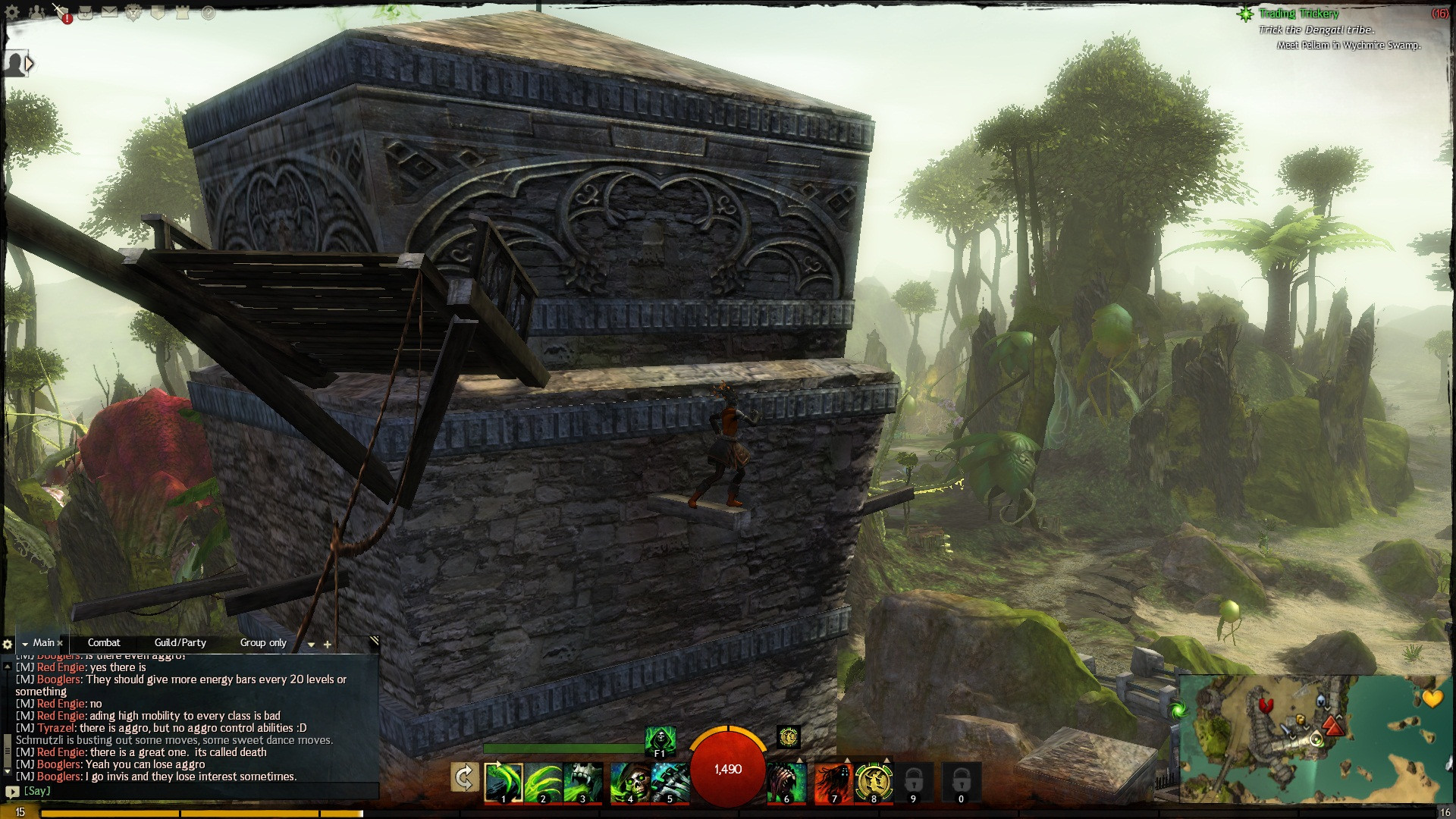 I received a nifty-looking temp sword during part of my personal quest. Unfortunately, it didn't have any way for me to create phantasms, which is a large part of what my mesmer build is based on (being able to create an army that is constantly shattering, tanking, DPSing, etc.). Was a little frustrating, but so pretty.

WARNING: Spoiler ahead. What follows is my journey through a random dungeon found in the world. There are no story spoilers but if you prefer to experience it for yourself, don't read this post.

So I was wandering around a zone, trying to 100% it when I stumbled upon an interesting cave. What follows is a little journal of the resulting escapade.

So the journey started off with finding a little path nestled on the side of a cliff across from a little lake. You'll notice on the mini-map that there is nothing indicating that there should be anything of interest up that path.

At the top of the path was a gate with a single torch.

After opening the gate, I entered into a cave.

In the cave I found 3 stone panels that I had to weight down with boulders.

Once this was done, torches lit up leading towards a gate that was now open.

Ahead was a floor of extremely shaky rocks that would fall down as soon as you touched them.

Needless to say, I died several times. Ouch, that hurts!

After the falling rocks, I had to battle my way through ghost pirates and spike traps.

After defeating the initial few ghosts and spike traps, I enter a much larger cave with a Pirate Boat!

A couple of plank to plank jumps later, I was standing above the boat.

Once on deck, I had to fight some more ghost pirates before I was able to head below deck.

Once below deck, treasure awaited! I was greeted by a decaying skeleton of the pirate captain and a chest full of booty!

With the treasure recovered, I just had to exit the cave by a conveniently constructed path up to a hole in the side of the cliff.

This game is definitely scratching my exploration itch that so many "modern" MMOs have failed to do.

There's another pirate themed one off of one of the main cities. Also very cool.

I fixed it, linking to Picasa didn't work as well as I planned

Level 39 in the cave, does that scale? If they truly are 39 then I'm not ready for the place yet

You mean good backgrounds for a flip phone?

OK, you edited your post...I'm leaving it!

Level 39 in the cave, does that scale? If they truly are 39 then I'm not ready for the place yet

Some hectic WvW with guildies:

A very cool mural that was almost missed inside the explorer version of AC:

Norn woman are kind of big...

A two time champion of the gladiator arena

Norn woman are kind of big... 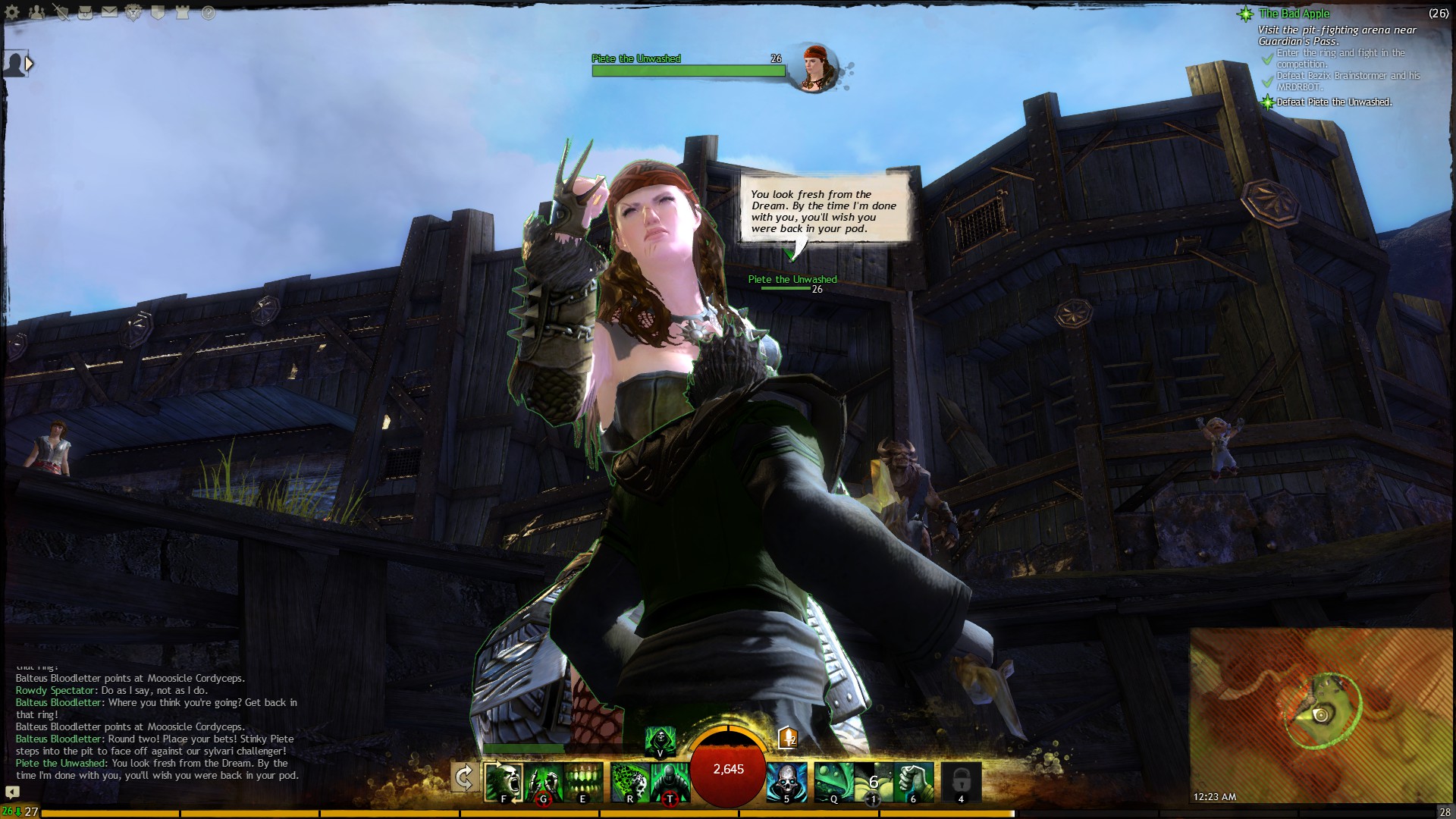 A two time champion of the gladiator arena 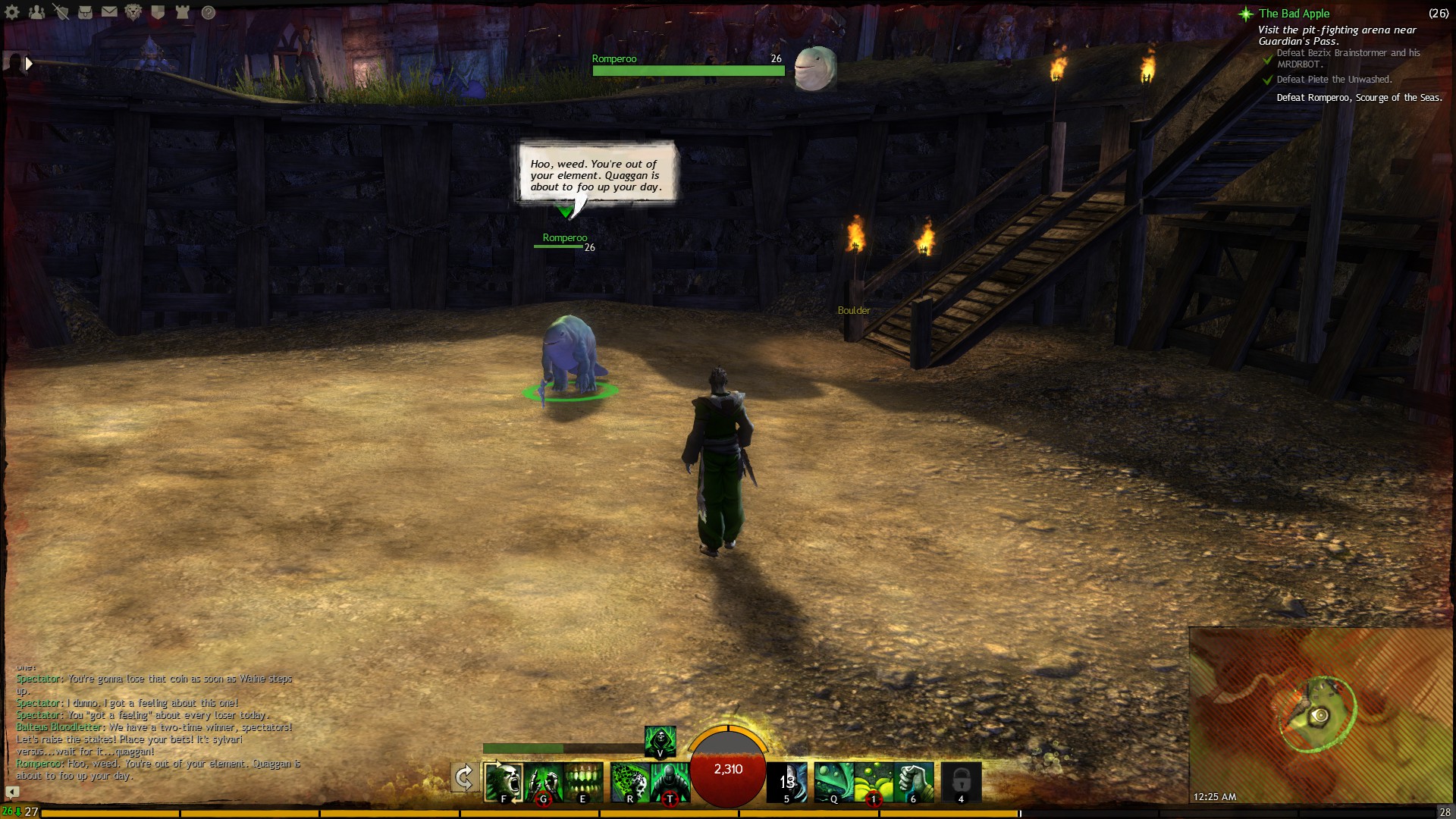 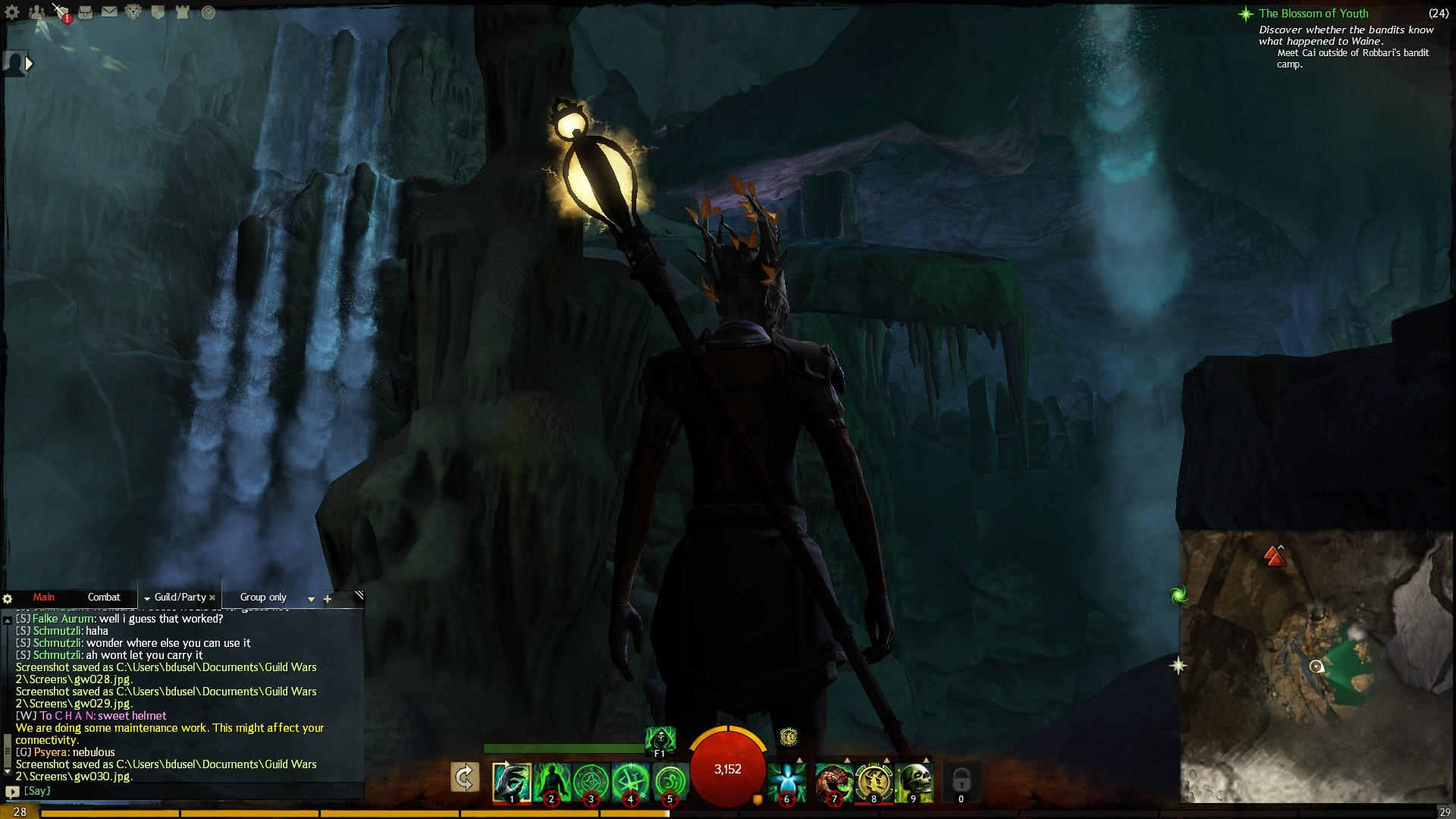 Seeing the XP on your screen reminded me about my attack on a doe last night.
So there I was, jsut added some new traits/skills and wanted to try a new loadout.

On my thief I had a skill that when in stealth would do a ton of damage if I was behind my target.
Well I wanted to test it out and this doe was lookign at me sideways as i was adjusting my corset.

I says "whatchulookinat" i says.

So I did what any thief would do. Slap him with a Cloak and Dagger to stealt and before he falls Backstab him for 6400 Damage!

It flew by pretty fast so I couldnt get a screenshot but I verified it in my log and sure enough I did over 6400 damage.

Ya unfortunately i got there just as the event ended so that one was all i got.

So what accomplishment am I most proud of so far in GW2? 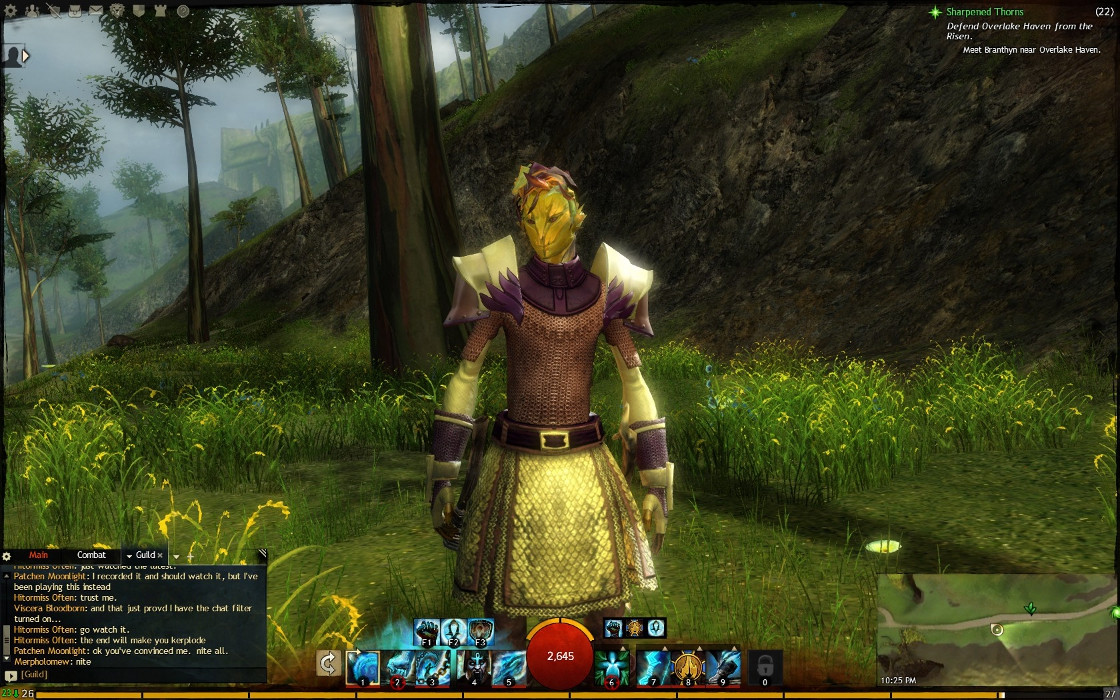 Getting my armor to match my leaves.