I grabbed it, played until the first battle. I can already tell I'm going to love this.
Gonna leave it until release though.

I've created a very arrogant but inept High Elf Noble Wizard (is that even a thing in D&D??) who appears to critically miss every spell he uses, but the environments so far (I've only played about 30 minutes) are spectacular, and the combat feels fairly intuitive. I think it expects you to think outside the box a little as well, I need to experiment more with manipulating the environment to my advantage.

Too early tell on it's nascent "Baldurs Gateness" but it will be Larian's Baldur's Gate, not Biowares. What it isn't, even 30 minutes in, is Divinity: Original Sin 3.

I've had no crashes to report on (playing on PC) and it looks gorgeous, as I may have already mentioned. I did lose my first fight though (1 on 1 encounter with an ambulatory brain. See early comment about critical missing) so it's certainly not holding your hand in early access.

So far, 30 minutes in, it's what I was hoping, not expecting.

EDIT: Oh, and I do hope you all read that EULA you agreed to when you started playing the game: 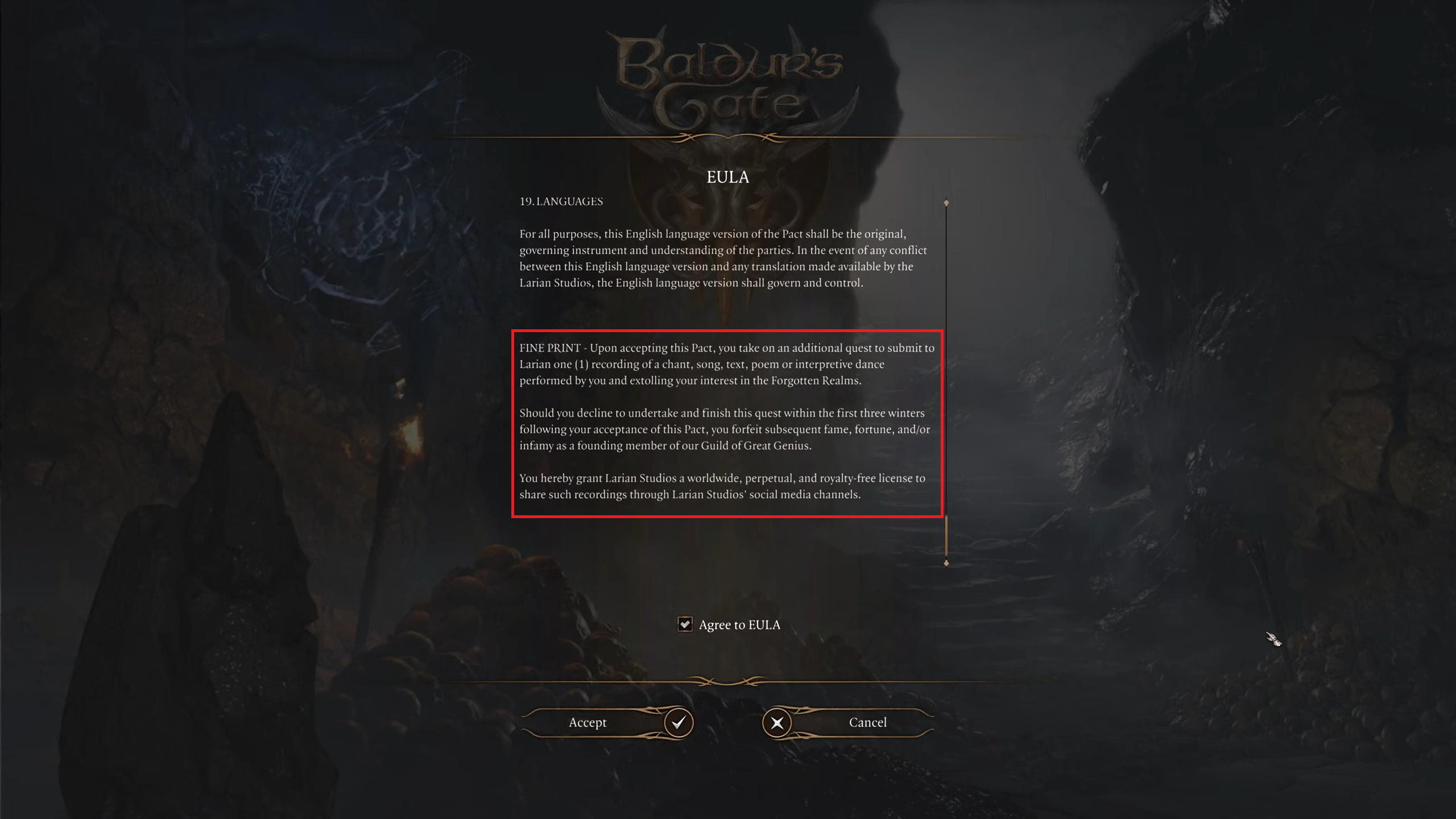 What does it say? Way too small for me to read.

The real question to me is how much fun is it to make your character?

What does it say? Way too small for me to read.

FINE PRINT - Upon accepting this Pact, you take on an additional quest to submit to Larian one (1) recording of a chant, song, text, poem or interpretive dance performed by you and extolling your interest in the Forgotten Realms.

Should you decline to undertake and finish this quest within the first three winters following your acceptance of this Pact, you forfeit subsequent fame, fortune, and/or infamy as a founding member of our Guild of Great Genius.

It is fun to make characters but only a fraction of the possibilities are implemented.
So it isn't as fun as it could (will) be.

There are some subraces. Clerics get three domains to choose from that I guess count as their sub class? I have heard that other classes get their subclasses at level 3.

I think a real area of power in this system are the abilities: throw, jump, dash, shove, dip and more.

Well I missed the cleric by clicking on the door and not her. Hope I can get her later.

I am most pleased with my purchase. Thoroughly enjoying my Drow Ranger.

Anyone else find the whole ‘and who do you dream of at night?’ A little, well, icky?

I hope that’s folded into the plot well enough for it to make sense. It felt completely out of context to be honest.

I assume it is for mindflayer stuff. You see them as your perfect romantic partner and everyone else tries super hard not to judge as you profess your love to a squid person.

If I see my romantic partner in game I am stabbing first, casting talk to dead after.

Baldur's Gate was one of the first games I purchased on my first computer that I had purchased myself. It was on 1 DVD which I thought was just amazing at the time.

I do wish there was an "AI" setting to have your character auto path around ground hazards.

Yes, I crave the dark and dramatic duo of Minsc and Boo from the original Baldur's Gate and not this new, shiny, happy Larian claptrap that involves intellect devourers and illithids!

I don't know how to explain it, but Minsc still feels like he fits within the world he lives in, whereas every time Larian decides to inflict their humour on me, it instantly destroys any sense of immersion or wonder or joy I was experiencing. The humour was better in the second game, but it still sucked. Aside from that, in general it feels like Larian are immune to subtlety, I really hope they've learned for BG3.

Also, perhaps this belongs in the Hot Takes thread, Minsc still annoys the hell out of me and was totally one of the worst parts of the first two Baldur's Gate games. I always ditched him the moment I could survive without his tankiness.

I assume it is for mindflayer stuff. You see them as your perfect romantic partner and everyone else tries super hard not to judge as you profess your love to a squid person.

If I see my romantic partner in game I am stabbing first, casting talk to dead after.

*throws away engagement ring and runs*

Played a while last night, really good so far. Only a couple of things that remind me it's early access, like Profiles not working yet. The Stadia controller scheme will take some getting used to. Haven't tried KBM yet. Can't wait to dig in.

Here my half drow is killing everything even squid related and y'all wanna get down with it?

Ok you can be in my party.

Judge not, lest ye yourself be squidified.

This image was posted in the gaming subreddit and the post was deleted.

At least you only download it once and then just have it until you're done with it. You could end up transferring a hell of a lot more than 150 gigs to play it on Stadia.

One thing I'm really hoping for is brightly-drawn companions like the originals had. An awful lot of modern games have gone to 'grimdark' NPCs, or ones that are more like coworkers than friends.

I've realized, over time, that this was one of the real draws of the original game, that the companions were all kind of over-the-top in their different ways. They were almost cartoon sketches of people, and that was part of what made them fun.

The thing is, I'm not sure if I remember them so clearly because they were bright, cartoony, and excellently voiced, or if it's just because I was young.

I may pick this up sometime in the alpha, but I'm gonna give it awhile to settle. These games are such time sinks that I'd hate to end up stuck.

Not in the least uptight about it being turn-based. D&D is turn-based. The real-time BG1 and 2 were the weird outliers.

Not in the least uptight about it being turn-based. D&D is turn-based. The real-time BG1 and 2 were the weird outliers. :)

Totally fair. But I dont particularly care about pnp D&D. I have never tried it.
BG3 is clearly a game that sells itself as a sequel to BG1 and 2, so the connection there is quite a bit stronger.

I doubt BG3 will be bad due to turnbased gameplay. D:OS2 is one of the best CRPGs ever made, and its combat was great as well.

Of course, the main reason I want RTwP is that I think it is a better system. In a world where a turn-based BG2 was going RTwP in BG3, I'd likely be quite fine with it, so it makes sense that people who prefer TB likes the change.

My second character is a half drow rogue. I have to say that I wish HBS Battletech's combat was like this. Imagine converting the abilities into mech actions (kick, punch, melee, shove or even throw [perhaps even blind by throwing dirt or somehow obscuring your target's vision) That would really put a wrinkle in mech choice if you have options other than missile or laser boats with no arms! Also the attack then move or move attack move or attack move shove is much more streamlined gameplay and no less tactical.

Favorite bug so far. I spoke to some lady she gave me a thing. Then before the conversation ends the camera jumps from my character to a party member and starts over. Do all the same choices and rolls. Get the same results. But she no longer has the item because she already gave it to me. When I get to the line about giving me the item she instead freaks out that someone robbed her.

Second favorite bug. Kill an enemy watch the body ragdoll all over the place.

This image was posted in the gaming subreddit and the post was deleted.

At least you only download it once and then just have it until you're done with it. You could end up transferring a hell of a lot more than 150 gigs to play it on Stadia.

The point is not the bits. The point is the time saved. No downloads, no updates, quick loading.

Admittedly, Stadia will be more feasible for more people once something like Starlink is in place.

Enable me people! Is it worth buying now or wait?

It's not the whole game, so it's better to wait.

Seriously, once this gets a full release, I'm all over it. I love Larian's games, and what I've seen of this has me very interested.

I have played for 5 hours. Assuming you know this is not the final game it has been very useful to learn the mechanics.

I kind of know my party for the real game now. I would have been annoyed to learn this while trying to actual play the story.

I will continue to mess around doing stuff I would normally not do so lots of mages in my squad right now.

Pence has a fly in his hair.

Is he undead? America wants to know!

Does it hang at a black screen with music? Try alt-enter to switch between full screen and windowed mode. That, weirdly, got me past that problem.

I've uninstalled for now. It runs too badly on my laptop to be fun. Going to give it a few big patches before trying again.