I have a similarly love-hate relationship with CC3+. Some of the tools are just incredibly handy for doing fantasy cartography stuff, but manipulating anything after you’ve put it down is just awful.

I will very much agree with that; as somebody who's creative process is very iterative and requires constant revisions, I don't think I'll ever be able to use this thing all that seriously because revising stuff is such a pain. I wind up just deleting big swaths of stuff and re-doing it just because it's so much easier than trying to select the individual items I want to mess with.

Finished creating world map for my own homebrew world(!) With the currently known/referenced locations added. Now i just need to sit down and write up a proper reference document so i don't keep forgetting everything 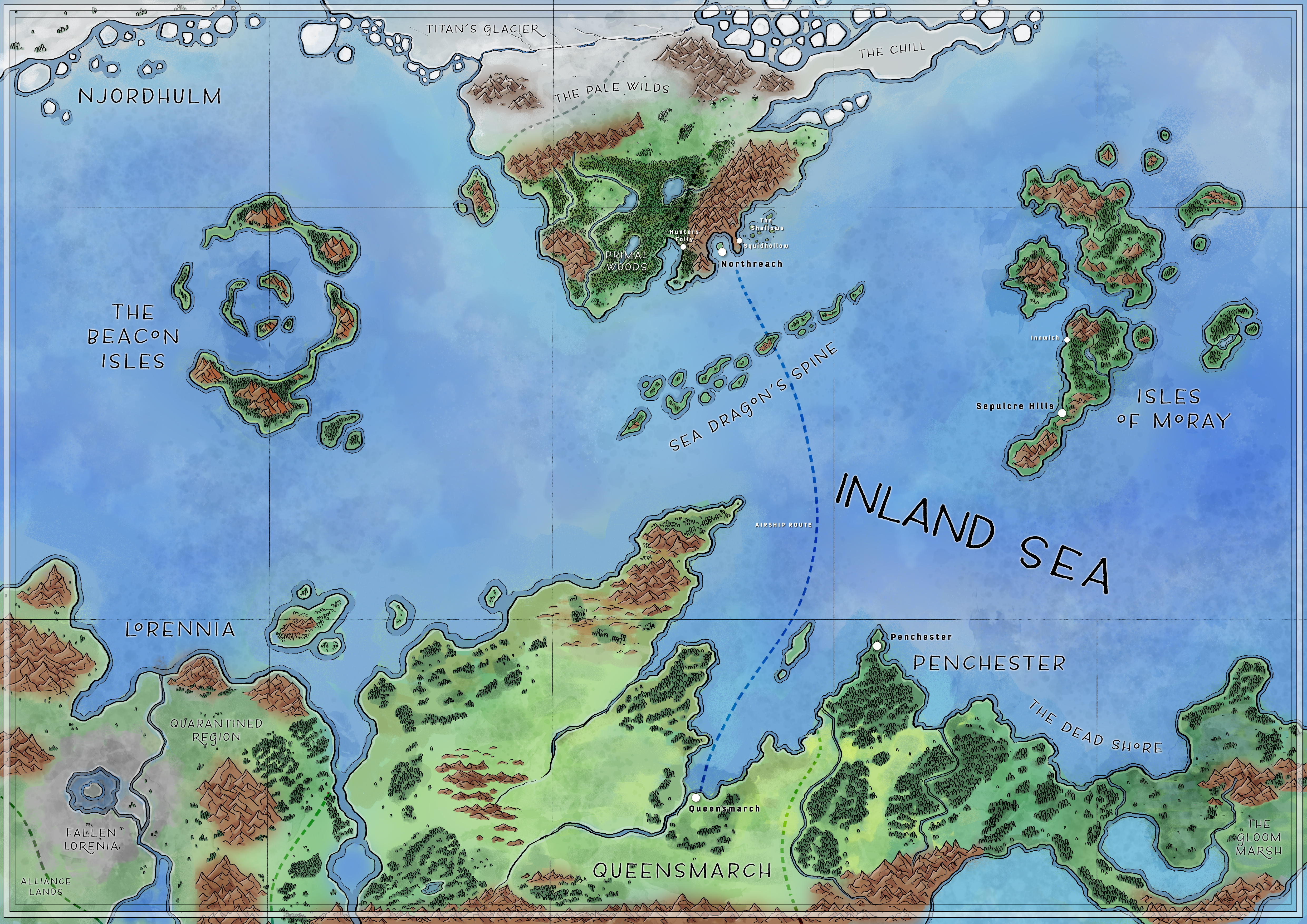 It's pretty big, might need to open in a new window and zoom in.

I already got in trouble with my fiance once for running too many games haha! But I met up with some people through GeeklyInc and we play weekly. If I get another running I'll let you know. Or maybe if we do some small one shots. Find me on Discord if you like! Ted the Pegasus#7223

I bought the bundle too, which got me thinking about playing and GMing again (though I've only ever done that for D&D). So, just tagging in here to note my interest and follow the discussion!

Pyxi, I love that battlemap.

Let me know if you are up to it. It has been a while since I have played, so I would like to get my feet wet before running a campaign.

Finished my map of Northreach, the city in my current homebrew campaign. Next up - the megadungeon city ruins that lie beneath!

hey also, go check out this cool thing that all the cool people will want to buy because it's for a good cause. (I have some minor involvement in the form of a couple of maps & illustrations)

"And I must say tonight that a riot is the language of the uneheard."
- Martin Luther King Jr.

What has the city of Shoalpeak failed to hear?

For far too long, the city has been split into layered districts which jump in wealth as they rise in elevation. From the safety of the upper district, under the protection of vaguely-humanoid guard contstucts, The Council of Pearls enjoy a lavish quality of life—one built by exploiting the lower districts. The less fortunate citizens of Shoalpeak have been pushed to the brink of despair, but every day is a new opportunity to fight back.
Will you fight back?

The city is hoarse, but it still calls out to you.

Fight to the Top provides two entry points into the adventure, to accomodate for parties of Shoalpeak locals or outsiders. Four such locals are included as pre-generated characters for this adventure, using the two new subclasses: the Bardic College of Protest, and the Paladin Oath of Resistance. Two new backgrounds are also included, mirroring the adventurer's themes of organizing and revealing the cities secrets: the Organizer, and the Source. Also included are eight new magic items, and 11 new statblocks—everything from guard constructs to mini money mimics.
With 15 encounters spread throughout the four districts of Shoalpeak—including a dungeon crawl through the sewers—Fight to the Top offers multiple ways to aid the people's resistance and naviagate the adventure. The party's actions as they travel through the districts of the city can have major impacts on the final encounter, and ultimately determine the success of the resistance's march.

All profits from the sale of this adventure will be donated to the NAACP Legal Defense and Educational Fund.

here is the dungeon layer that goes with the city map above. Positioned 1:1 with the surface city (superimposed in the background)

Pyxistyx, I am always impressed by your work. These maps are pretty amazing. I love the scale of it, then to double up with the full dungeon map under the city. Awesome.

Got a little story to tell ya, GWJ!

Two sessions ago, we had an epic confrontation during our coronavirus-inspired D&D game. We were literally storming a castle where someone we've been trying to rescue for months was being held. The castle encounters took two sessions; this was the second. One of our members had missed the first one, and as the DM explained that he was just showing up out of nowhere, I summarized the fight we were engaged in as being against at least three bad guys that one would imagine to be a boss, plus minions. It wasn't looking great.

Somehow, we chipped away at them until it started to appear that victory would be ours. However, on his turn, the Big Bad raised his axe above the head of his unconscious captive, the object of our quest, and threatened to cave his head in if we continued attacking. One of my best friends, playing an Elvish Ranger named Gorfnod, was up next. He nocked an arrow, pointed it at the Bad Man, and dramatically said "If he dies, you die."

And then, for some reason, he fired.

I assume he didn't quite understand the implications of both the Bad Guy's threat and his own? Still not really clear on what happened. We've negotiated our way out of similar spots in the past, when more Charismatic characters were calling the shots.

In any event, the shot went wide, and the Evil Dude made good on his threat, pulping his captive's cranium. Obviously, we killed him for that, but it was a hollow victory - although it was a pretty awesome demonstration of how every move counts, and how actions in the game have consequences.

Anyway, the following session, my friend showed up (on camera, this is a Roll20 campaign) with a brand new t-shirt reading "Gorfnod Shot First".

Sell Gorfnod to pay for a resurrection at your local temple!

I don't know that we could get very much for him.

Was holding off on posting this until the project was properly announced, but here's a map i did last week for Vorpal Dice Press, covering the layout within an active Warforged Colossus (less a dungeon, more a mythic monster encounter). This was SUPER fun to work on

You can hear the wider project being discussed on the Making a Monster podcast here.

Also, Song of the Mountain, my first "professional" written adventure will be up live on the DMs Guild next, Tuesday i reckon

So that's cool. And I finally finished the first draft of that other project i'm writing on as well, so last/this week has been quite productive thus far, for once

That's awesome! Now I just have to convince my DM to let me play him.

The second of my homebrew D&D setting's city maps. This time the graveyard town of Sepulchre Hills. not a lot of annotations right now because i've barely got any details fleshed out of this place right now, and the players probably wont get to it in this current short campaign i'm running.

I asked my patrons for what city i should draw next and they seem to be leaning towards the ruins of Fallen Lorrenia - capital city of the elves, now rendered a haunted ruin after a recent disaster wiped out the entire population in a single terrible morning....

If they do, don't join the dance.

Do you know what that sound is, Highness? Those are the Shrieking Eels — if you don't believe me, just wait. They always grow louder when they're about to feed on human flesh. If you swim back now, I promise, no harm will come to you. I doubt you will get such an offer from the Eels.

And that is how a good GM works!

One of my favorite things to hear when DMing or playing is when someone says "Stop! Stop feeding the DM!"

My hovercraft is full of eels.

And that is how a good GM works!

One of my favorite things to hear when DMing or playing is when someone says "Stop! Stop feeding the DM!"

With every careless statement and off-handedly voiced suspicion, my power only grows...

Song of the Mountain is now LIVE on the DMs Guild!

Welcome to Icewind Dale. One of the harshest environments on the planet, it is nevertheless remarkably beautiful. In Lonleywood, smallest of the towns of Ten-Towns, a haunting, mournful song carries across the tundra winds. Local legend claims the song is the spirit of the wild commemorating the success of two bounty hunters, Melody and Brigde, over a vicious remorhaz years ago.

But is that the truth? Lyra is desperate to discover, a quest that has made their recent disappearance news. Adventurers are tasked to follow Lyra's trail, where they will face the worst of Icewind Dale and discover the secret history of Melody and Brigde.

Song of the Mountain tells a haunting and memorable story of love, loss, and betrayal set against the harsh beauty of Icewind Dale. This one-shot adventure is designed to introduce players to several of Icewind Dale's threats and themes as well as provide hooks for an ongoing campaign. With your purchase, you will receive: 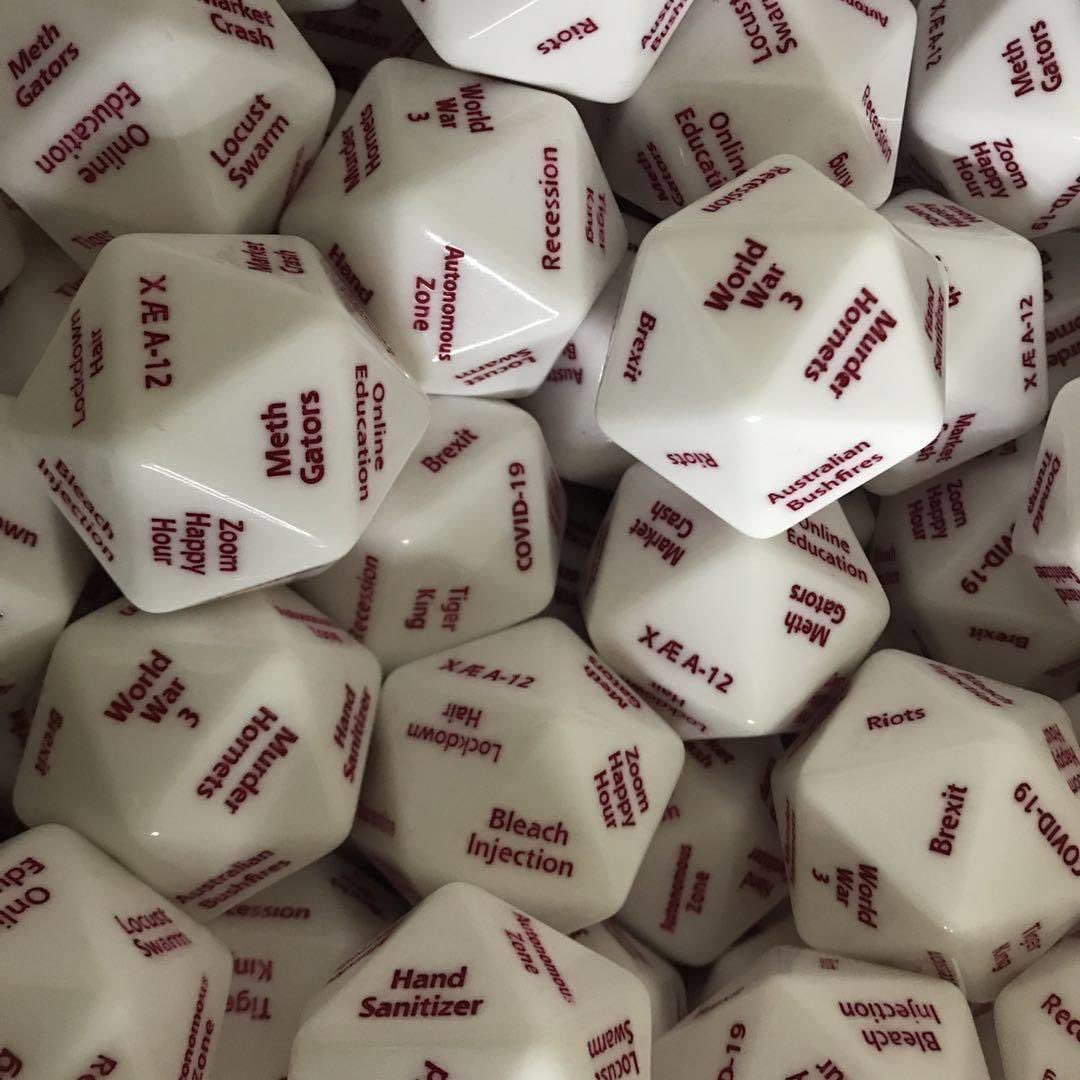 Oh yeah, meant to say, Song of the Mountain reached it's first "Best Seller" milestone within a week and a half, which was great! So it is now a copper best seller and well on its way (70/101 copies) of reaching Silver.

If you know anyone who might be interested in more Icewind Dale content with the release of Rime next week, do please send 'em my way

So I finally found a game!

It's a Mythic Odysseys of Theros and I decided to write up a pansexual satyr bard. I could tell it made one of the other players a little uncomfortable (she's a bit conservative), but I figure that's probably a good thing.

This will be my second game of 5e ever, so I am pretty nervous that I won't have the mechanics down terribly well, but I am fairly confident that my role playing will make up for it.

Oh, and I didn't realize how powerful that combination was particularly if I go College of Eloquence. By third level, it practically breaks the game.

Song of the Mountain is now a SILVER Bestseller on the Guild!

Next stop : the metal everyone loves to hate! Electrum! I hit that at 251 copies though so...it'll probably take a while (Silver is 101)

Song of the Mountain is now a SILVER Bestseller on the Guild!

Next stop : the metal everyone loves to hate! Electrum! I hit that at 251 copies though so...it'll probably take a while (Silver is 101)

One of these days my kids will be old enough I can make them play on my schedule... then maybe I can keep a regular game going so I can play more than just at conventions... lol. This is the exact type of content I want. Thank you for making it.

yay! good to hear that, thanks