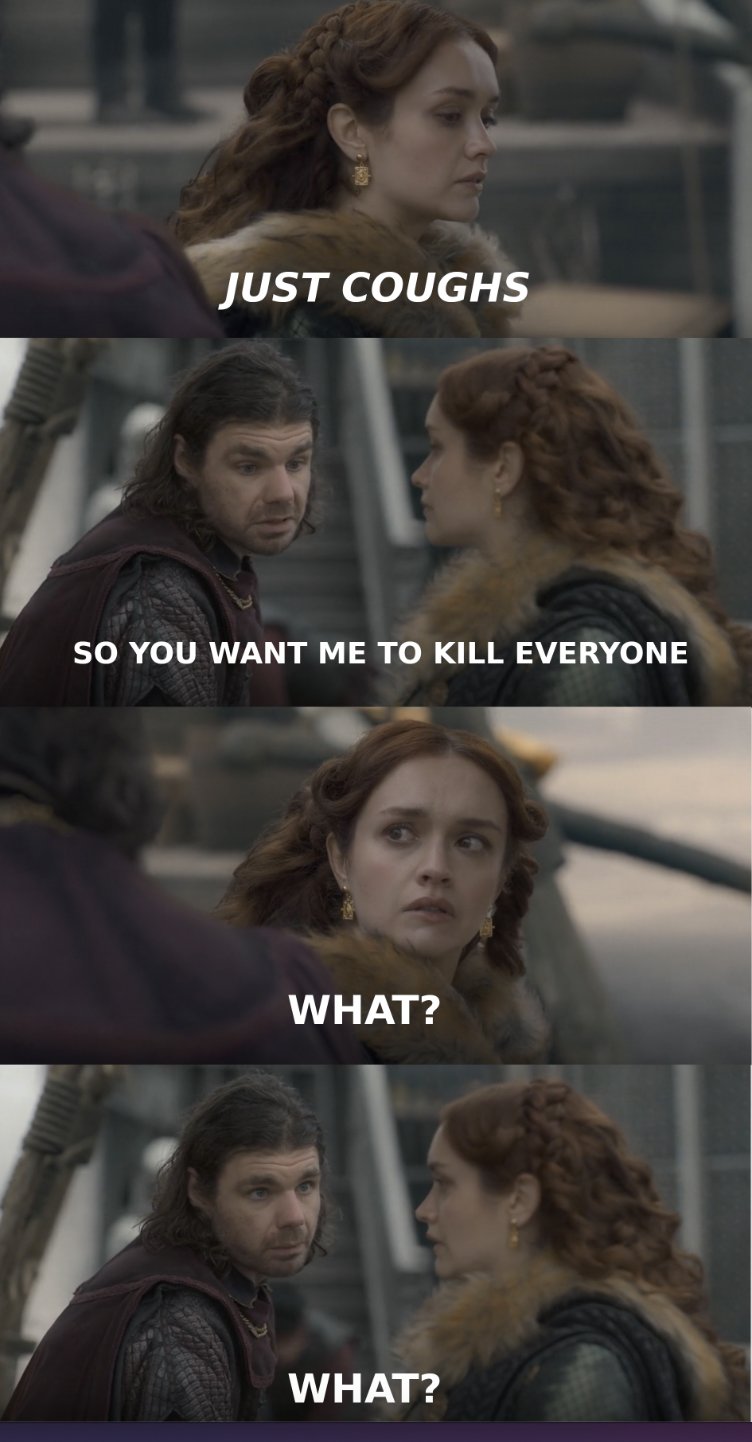 Larys to Alicent, virtually every time they share a scene:

So the Dance of Dragons basically started with Viserys thinking he was talking with Rhaenyra on his death bed but was in fact talking to Alicent and Alicent had zero clue what he was on about.

Cripes, this show is just a bunch of tell tell tell and no show. Too many characters and names getting thrown around with little context. Too many children that aren’t clear who they are because the time jumps makes it too difficult to remember who’s who. (“Wait, how many children do they have?!)

And the final scene was so incomprehensible that we needed the post-show recap to explain.

Also, why did the sea snake just disappear with a huge plot point happening off screen? With all the early setup he should’ve been the one to challenge the throne. Instead it was his brother who we just met! (Maybe?)

I didn’t read the book, but I feel like this whole season is all just table setting for later seasons. We'll probably finish this season off but, hoo boy, what a slog. If this season doesn’t end strong and the next season takes three years to air, I doubt we'll jump back in.

As someone who has read the book and doesn't mind doing some homework to keep up, it's still a bit of a mixed bag. One minute you've got genuinely effective stuff like Viserys painstakingly hobbling his way up to the Iron Throne and allowing no one but his estranged brother to help him. The next minute it goes just a little too big and broad and it crosses over into camp, like when he insists on giving his big "let's everybody be friends" speech with his empty eye socket staring directly at the camera. And then in a third minute you've got absolute stupidity like Alicent being all ready to declare peace until she changes her mind again over a stupid misunderstanding. "Prince? Aegon? Well, those certainly are words that can only mean one thing and admit to no other interpretations."

Also, why did the sea snake just disappear with a huge plot point happening off screen? With all the early setup he should’ve been the one to challenge the throne. Instead it was his brother who we just met! (Maybe?)

Don't understand this. What do you mean by Corlys challenging the throne? The point was to decide on who should replace him. (His brother did appear earlier but he hasn't been in many scenes. I only remember a discussion between the brothers during the triarchy war.)

Agree. They're trying to soften up Alicent to give some reasons for what she's about to do. Trying to make her more gray. But that's kind of a sloppy way of doing it IMO.

I haven't watched the after show commentary yet, so maybe I'm misreading what they wanted there.

I think thematically, it's a lot stronger if the civil war happens solely because of the enmity between Aemond / Aegon and Jace / Luke. The adults can decide to make peace, but that doesn't erase the fact that they've been raising these boys to hate each other, and so the generational conflict continues even after the ones who instigated it regret doing so.

I like that a lot better than a Three's Company-esque misunderstanding that convinces Alicent that Viserys actually DID want Aegon to inherit after all.

I like that a lot better than a Three's Company-esque misunderstanding that convinces Alicent that Viserys actually DID want Aegon to inherit after all.

Yeah, I continue to feel that the addition of this "prophecy" has cheapened the show and the events it portrays. If they wanted to have a cheesy easter egg for the previous show, fine. But making it so events of this show are directly driven by it makes it feel like none of this interpersonal drama really matters. I'm kind of baffled as to why they thought it was a good addition/change from the books.

Also rolled my eyes so hard at Ser Criston just casually murdering a member of the Small Council and nobody saying anything about it. Just hammers home that this is not a show that should be watched with my brain turned on.

All that said, these last two episodes have been the most outright entertaining of the season, which makes me hopeful for the finale. Good music, cool plot points, good dragon scenes. Just give me more of that and i'll be happy.

Oof. This show has had its rough moments, but that was the first time I got to the end of an episode thinking, "is it just me, or was that whole thing... not good?"

I don't have enough of a handle on Aegon as a character to make much out of his "I don't want to be king, but not badly enough to formally abdicate in favor of any of the people who do actually want it or pull a Laenor and quietly slip away to the Free Cities weeks or months or years ago, only just enough to get drunk and hide when the day comes but then go along with it after they find me and yell 'olly olly oxen free.'" That whole thing was clumsy.

The split between Otto and Alicent was similarly clumsy. Alicent wants to counsel Aegon to send Rhaenyra terms, Otto wants to counsel him to skip straight to open war, okay, fair enough... but why do they assume that whoever finds him first gets their way? The whole episode hinges on that assumption, which just... doesn't seem warranted. At all.

Nor did Rhaenys Big Dumb Moment(tm) hold together at all. Roast the Greens or leave, but don't do this big dumb presentation. "I could roast you, but I'm not gonna. But I could. But I won't. Nor will I spare a thought for the hundreds of smallfolk I just killed making this statement. 'Kay bye."

I'm kind of ok with Aegon. He's a nasty little coward that in the end does what he's told, even if he doesn't want to... until being crowned king, I think. After that moment, I got a "I can do everything I want now" (Joffrey Baratheon approves).

Rhaenys, I just... I have no idea what was the decision process there. Maybe she wants to see both families kill themselves? Watch the world burn vibes? But that would put her granddaughters in the way too. I really have no idea. Maybe the next episode will clear it up.

I'm kind of ok with Aegon. He's a nasty little coward that in the end does what he's told, even if he doesn't want to... until being crowned king, I think. After that moment, I got a "I can do everything I want now" (Joffrey Baratheon approves).

He could do everything he wanted before, considering that all he really wants to do is get drunk and f*ck girls (consent optional). I think it's more like, "well, a crowd of cheering peasants isn't quite the unconditional love and support I never got from mom and dad growing up, but it's a start."

(You forgot about sponsoring cockfights between feral children.)
One of the things he really wanted or seemed to was to not be king. 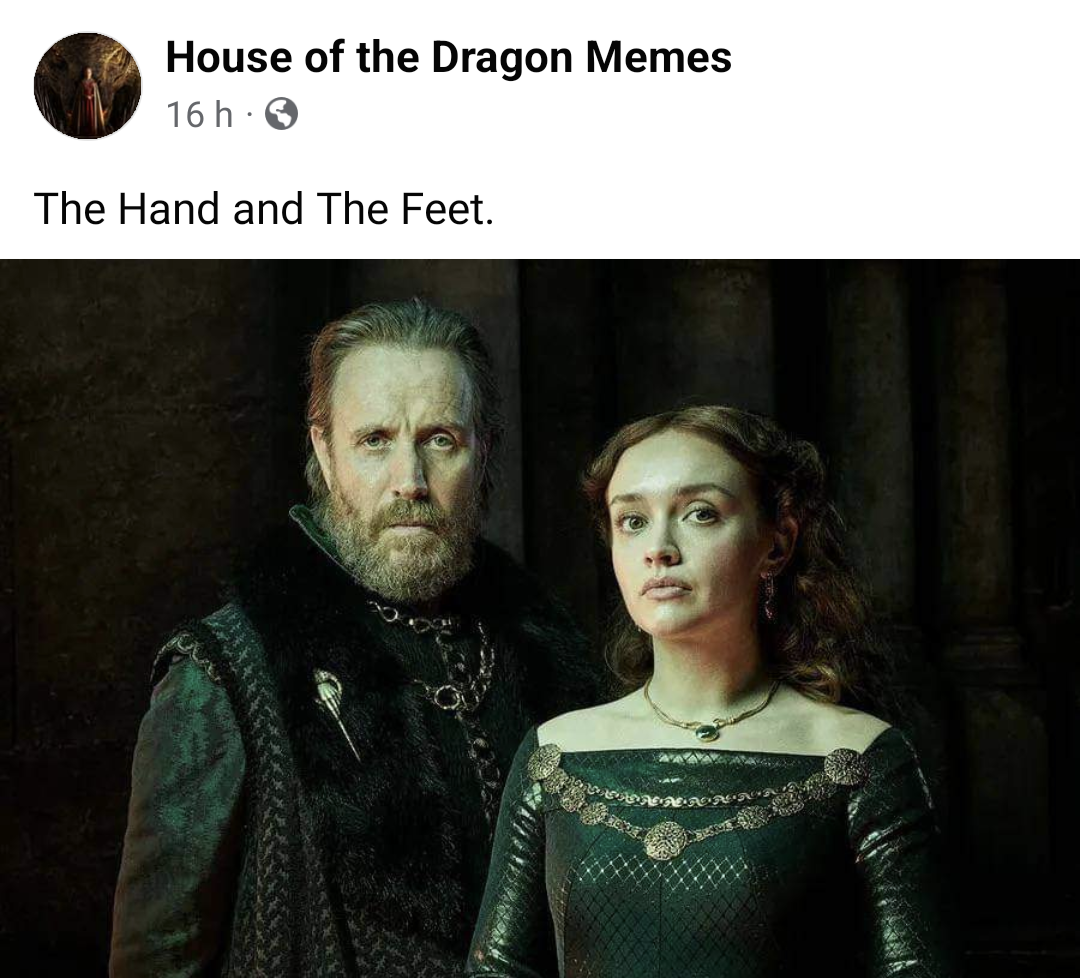 I think I'm just hate watching at this point.

Hoping everyone dies which is a high probability.

I think I'm just hate watching at this point.

Hoping everyone dies which is a high probability.

We have met the only two characters who live, ever so briefly.

The rest start dropping like flies starting next episode. 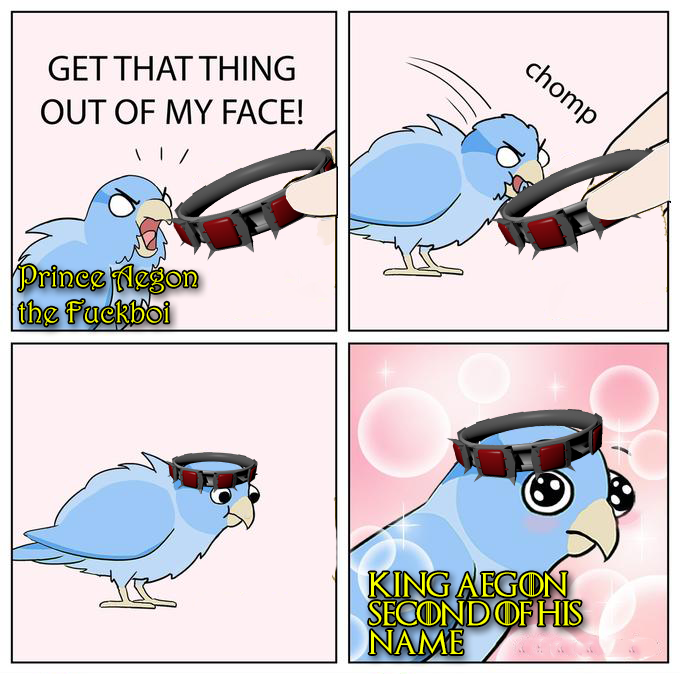 I guess they recovered Arrax's black box from the ocean to find out what happened.

Presumably Aemond got back to King's Landing, gave a version of what happened (probably one that makes him look a little better than, "I was mostly just f*cking with the little sh*t that cut my eye, and then his dragon did an oopsie which made my dragon do an oopsie and long story short I did an accidental murder of negligence"), and word got to Dragonstone, but it was more economical storytelling-wise for the show to skip straight to the aftermath. 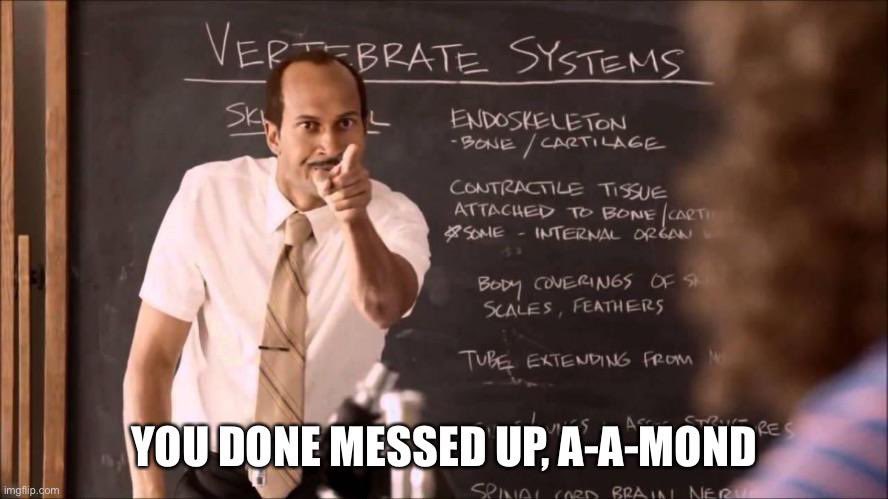 Just finished House of the Dragon and really liked it. My only problem were the dragons. So unbelievable to have flying snakes that can breath fire. Almost as unbelievable as having brown people. I've been on this planet for nearly half a century and haven't seen a single brown person.

Okay, seriously I liked the show. There were some odd moments I didn't get. Littlefinger want to be pleasuring himself to the queen's fee. That one guy allowing the knight to live after he killed his lover. Pulling the baby out by it's head, gross. The king and no one else commented on Dr. Who and Not Khaleesi getting married. It was such a scandal that they might be doing the nasty then nothing when they tie the knot.

I liked the acting. Liked most the special effects. Some of the cgi was bad. Liked the overall story. Also having black actors really worked for the bastards situation.

I think more story was needed from the princes. The original series did a better job juggling a big cast. Many people were just sort of there with no presence.

I do like how most people aren't cartoon evil. The only one that seems completely bad is bad foot man.

The Land of Mosquito Twisters
Baron Of Hell wrote:

Littlefinger want to be pleasuring himself to the queen's fee.

Is there anyone who isn't turned on by a fee?

Also having black actors really worked for the bastards situation.

It would have worked either way. In the books Velaryons look like Targaryens, so having children with black hair would still be a scandal.

It's not quite so clearcut in the books, where Laenor's mother Rhaenys has jet-black hair from her Baratheon mother, so it's conceivable that the black hair just skipped a generation. The book also describes a strong facial resemblance between Rhaenyra's kids and Harwin Strong, but that's a tough thing to cast for in a live action show.

Yeah, that makes sense and the Baratheon seed is strong as we already know.
Please consider my comment rollbacked.