I picked up a Yamazaki 12 year the other day and plan on giving that a try. Never had it before, but have heard good things.

I had it a ways back as part of a Japanese whisky flight and do recall it being a very nice. I haven't looked recently but from what I understand there's not much Japanese whisky left thanks to Bill Murray. Were you able to get it at a reasonable cost or did it come at a premium?

I got it from the store for ~$80, which is pretty low from what I hear.

My access to the spreadsheet has been cut off. I sent a request to get permission again but figured it would not hurt to post here as well.

I did go back and get that bottle of Oban 14 that I was eyeing last time. After one glass, I think this bottle will do nicely when I'm not in the mood for something peaty like my favorites (Lagavulin and Ardbeg). I've only had a little bit, though, and hope it will improve with more tasting.

On a whim, I also picked up a bottle of Knob Creek Smoked Maple bourbon. I've had Knob Creek straight bourbon once before ("OK" IIRC), and I'm not usually a fan of flavored spirits. I'm in the middle of my first glass right now, and I'm not sure what to think. Most of the reviews I read (like this one) said that the KC actually tastes like bourbon with maple flavor, as opposed to some others (like Jim Beam Maple) which more resemble maple syrup with alcohol. I haven't tried the others, but to me this definitely hits strong with the maple, and feels a little thicker in my mouth; maybe that's my brain trying to interpret the maple flavor as syrup.

Usually I sip my scotch or bourbon in the evening, while I read GWJ and/or game, so something that tastes like a dessert isn't entirely out-of-place.

My wife will like it. I'm not sure whether that's a good thing.

Then I decided that I'd rather have something a little more peaty, so went home with a bottle of Ardbeg An Oa. I've had a glass-and-a-half so far and I'm pretty happy with this purchase. Maybe next time, Oban!

I saw this on the shelf the other day and was really tempted, but it was on the highest shelf and I was too short to safely reach (no comment), and the cashier was busy selling 40s of malt beverage to a bunch of construction workers. So I got something a little lower down.

Next time ask for a hand. I'll think you'll find it worth it (if you like Islays).

I found an unusual liqueur last night, while waiting for a table at the local KBBQ place. It's called "Tiffin Tea Liqueur", and it's a 24 proof aperitif that is made from Darjeeling tea extract, as well as some other essences that are a bit floral/citrus-y. It's unique! It smells like good tea, it tastes like a very mild herbal liqueur with maybe some floral overtones, but the finish is that of a perfect cup of tea. Slightly sweet, with a tannic mouthfeel that just lingers for a moment. Very pleasant with ice.

I'm going to try it with a little soy milk, and also with a bit of lemon and sugar (well, Demerara simple syrup). With all the hit-you-in-the-face liqueurs around, this is a nice change, a drink that clearly aspires to pleasantry rather than exceptionality.

A mix of store lemonade three parts, and one part Tiffin, yields an Arnold Palmer taste-alike with about 6% alcohol. This will be a perfect summer drink.

I am intrigued by that description. Looked around here and it is a bit hard to get. Will keep looking.

I won't say it's changed my life, but it's something I never would have guessed existed. So it's fun to play around with, and the novelty alone is entertaining, at my age.

That is why I am intrigued. Not really close to my usual drink. Straight whisk(e)y is my normal jam.

It's got all the taste of a Long Island Ice Tea, but like 1/4 the alcohol. About as much as a wine cooler. Highly refreshing. I'm going to lay in a few bottles for the summer.

I just picked up a bottle of Teeling Irish whiskey. We don't talk a lot about Irish in here, but I really enjoy it. This is a bit more than Bushmill's(my regular Irish go-to) but I really like it - is super smooth(just like me).

A gift from my mom. The most wonderful time of the year.

Nothing came thru on the pic for me. Borked?

I just picked up a bottle of Teeling Irish whiskey. We don't talk a lot about Irish in here, but I really enjoy it. This is a bit more than Bushmill's(my regular Irish go-to) but I really like it - is super smooth(just like me).

I just tried that recently - my girlfriend got a bottle as a gift. Really really enjoyed it, and felt a cut above your run of the mill Irish

I saw it okay on my desktop, but it doesn't seem to be working when I look on my phone.

Top 20 whisky releases of the year

My haul this Christmas: 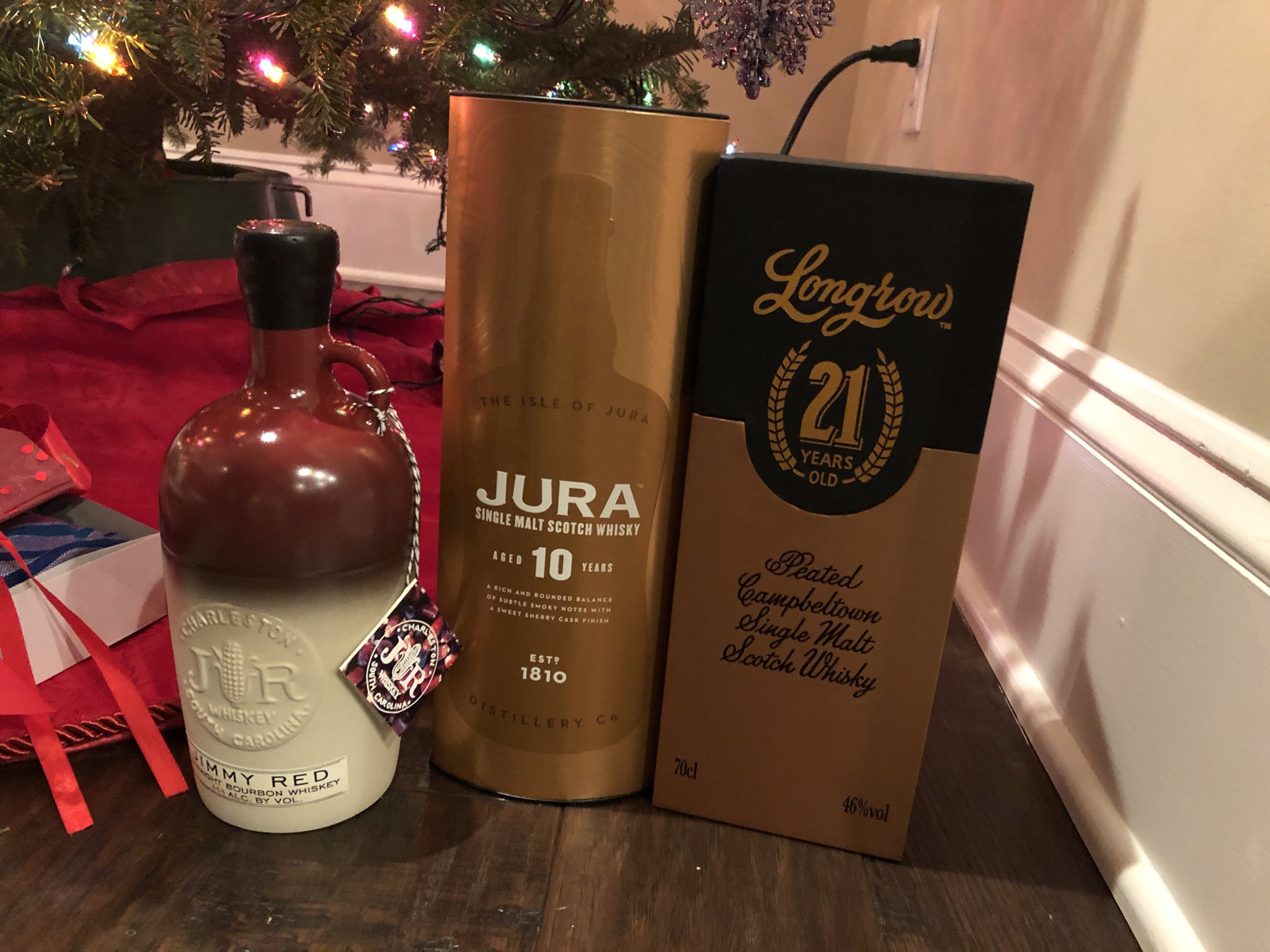 (Also not shown: a bottle of the James Henry rye from Moonrise Distillery in Georgia.)

Definitely liking getting the reputation as a whisk[e]y drinker and getting it as a gift.

I posted about this in slack too, but the one on the left is a whiskey made from Jimmy Red corn. NPR did a cool story about the revival of that corn a while back and I was super excited to try some.

It's extremely smooth, sweet with a hint of spice, and has a super thick mouthfeel. Liked it a lot.

Tell me more about that Longrow. The description checks all my boxes.

All of the Longrow expressions I've tried have been a nice balance of flavors with a touch of peat. This one's no exception, but it's so very smooth and... deep? It definitely has something over the others I've tried. Sweet and a little smokey and a bit of spice.

Anyone here buy whiskey online? I am wondering how the bottles would survive shipping.

It is also my favorite stop that I have done so far on the Bourbon Trail. The distillery and its grounds are BEAUTIFUL.

I love 101 as well - is super easy to sip, especially considering the proof!

Anyone here buy whiskey online? I am wondering how the bottles would survive shipping.

I have bought lots of wine from here in the States with no issue. Properly packed it is very safe. If you are looking to order from overseas there are other issues. Packing is the same as here from any legit vendor. legality OTH is the issue. You can still get stuff here but you are gambling the customs agent does not like what you ordered more than you.

I love OGD bonded but the 114 isn't my cup of tea. The alcohol is just a bit too prominent for me. But the bonded is one of the best values on the market.

Yeah, I have had to recalibrate myself since I first got into whisky. As someone who has developed a taste for finding "interesting" stuff I poo-poo'd the Jack Daniels and Wild Turkeys of the world for a long time, but there's a reason they're some of the most popular whiskeys in the world. Their base models are actually generally decent, and they're jumping on the more special bottlings like every other distiller and make some pretty great stuff at reasonable prices in their mid-lines like the Wild Turkey 101.

I'm still working my way through my whisky advent calendar for the year, and I've been pleasantly surprised by a couple of the supposedly more "boring" ones. (If you're interested, here's my thread for this year.)

Wow, I haven't posted anything new here since October. I probably won't remember everything I've tried since then.

The Oban 14 that I bought turned out nicely. It's not at the top of my list, but will probably show up at my house again.

Over holidays (I think) I bought a bottle of Redbreast Lustau Edition (Irish) and Talisker 10 (Isle of Skye Scotch).

The Redbreast was pretty decent, but didn't really live up to the high praise I've heard about it. I'll probably try one of their standard expressions one day.

The Talisker, on the other hand, I approached with modest expectations and was pleasantly surprised. It was really rich and nicely peated for a Scotch that didn't come from Islay. I'll definitely try this again.

The next trip to the store netted me a bottle of Michter's Straight Rye and a bottle of Bruichladdich Port Charlotte Scottish Barley "Heavily Peated" (Islay Scotch).

I'm not sure what to make of the Michter's. I like it, but I like their bourbon more, and I like the Angel's Envy Rye more. It's a fine drink that ends up second-best in two different dimensions.

While the Port Charlotte did not seem to me to be "heavily peated", it's a damned fine delicious drink. It's the second bottle of Bruichladdich I've tried and I will definitely drink more from these guys.

Since my wife asked me to stop at the wine store on the way home tonight, I took advantage of the situation and picked up a bottle of Green Spot (Irish pot still) and GlenDronach 12 (Highland Scotch).

I picked up the Green Spot because I ran across a review for it recently (while looking for something else) and it seems like an appropriate season for me to celebrate my Irish heritage.

I've had a few sips so far, but already can tell that this is a fantastic choice for whenever I'm in the mood for something on the sweeter side. If the only Irish you've tasted is Jameson, give this a try.

The GlenDronach is still on my shelf un-opened. I'll probably give that a try over the weekend.

Hrdina, Oban 14 is basically my favorite. If I feel like I can afford it I go for that. Do you have any recommendations for similar scotches (similar flavor/character) that are both cheaper and more expensive? What I get on the cheaper end tends to be Bowmore and it's fine, doesnt have a ton in common with Oban 14 but I'd like to try some others.
I don't know of a finer/more expensive one on the same spectrum.