We'd qualified for the Champions League a couple times by finishing top four and found the group stages quite easy, but then kept getting dumped out in the quarter finals. PSG ran us over without noticing we were there one year and then the next year we won 1-0 in Munich, then lost 3-0 at home.

The next year we cruised through a group featuring Juventus and Porto, then immediately ran into an Atleti stonewall in the first knockout round for 0-0 and 0-0 before losing on penalties.

So... about that Champions League. The following year I had what looked like an easier group but I got myself into real trouble.

We drew the home opener with Levekusen and then lost the next game away to Lyon to immediately put ourselves in a hole. Despite bouncing back from that we still needed to beat Porto in our final game to guarantee progress.

We only managed a draw, but it proved to be enough to scrape through in second.

In the first knockout round we smash Schalke 7-2 yadda yadda and then it's on to the Quarter Finals where Atleti are waiting for us yet again.

We lost 1-0 in Madrid to about the dumbest goal I've ever seen, meaning we'd have to get a result at home but in that home leg we immediately fall behind 2-0 in the first half hour.

That's 3-0 on aggregate and Atleti's two away goals mean we have to score four times in an hour. f*ck.

Riiiight at the end of the half Ben Brereton sneaks onto a through ball at the edge of the Madrid area and fires across the keeper into the far corner to make it 1-2(1-3) and it's not much, but it is a tiny sliver of hope.

Which turns into my best comeback ever.

In the semi-finals we get Barca and that game turns out to be much easier than Atleti, thankfully. Once again we lose 1-0 in Spain, but then we're ahead 3-0 at half time of the home leg and that's the final score, putting us into the final where we'll meet... Real Madrid.

Madrid have got Mbappe now and he sprints away from my midfield right before half time and gets yanked down by a defender about an inch inside the area. Mbappe stands up and takes the penalty himself for 1-0.

On 70 minutes he scores again, latching onto the rebound from a fantastic save to tap into an empty net for 2-0.

I don't really have too much to do here now. My regular second striker behind Brereton is injured, so I have to throw on squad player Thomas Olivier Amang who has a lot of pace and not much else.

He immediately scores with his first touch.

The remainder of the game turns into the Amang show, as the tired Spanish defenders can't handle his speed and he could have four goals in 15 minutes.

Ultimately he only gets two, but that's all I need to force the game into extra time where youth product Euan Wilson, who might be the slowest winger the world has ever seen, is left completely unmarked for a long punt upfield, dribbles in from the left and slots home near post for 3-2 AET. 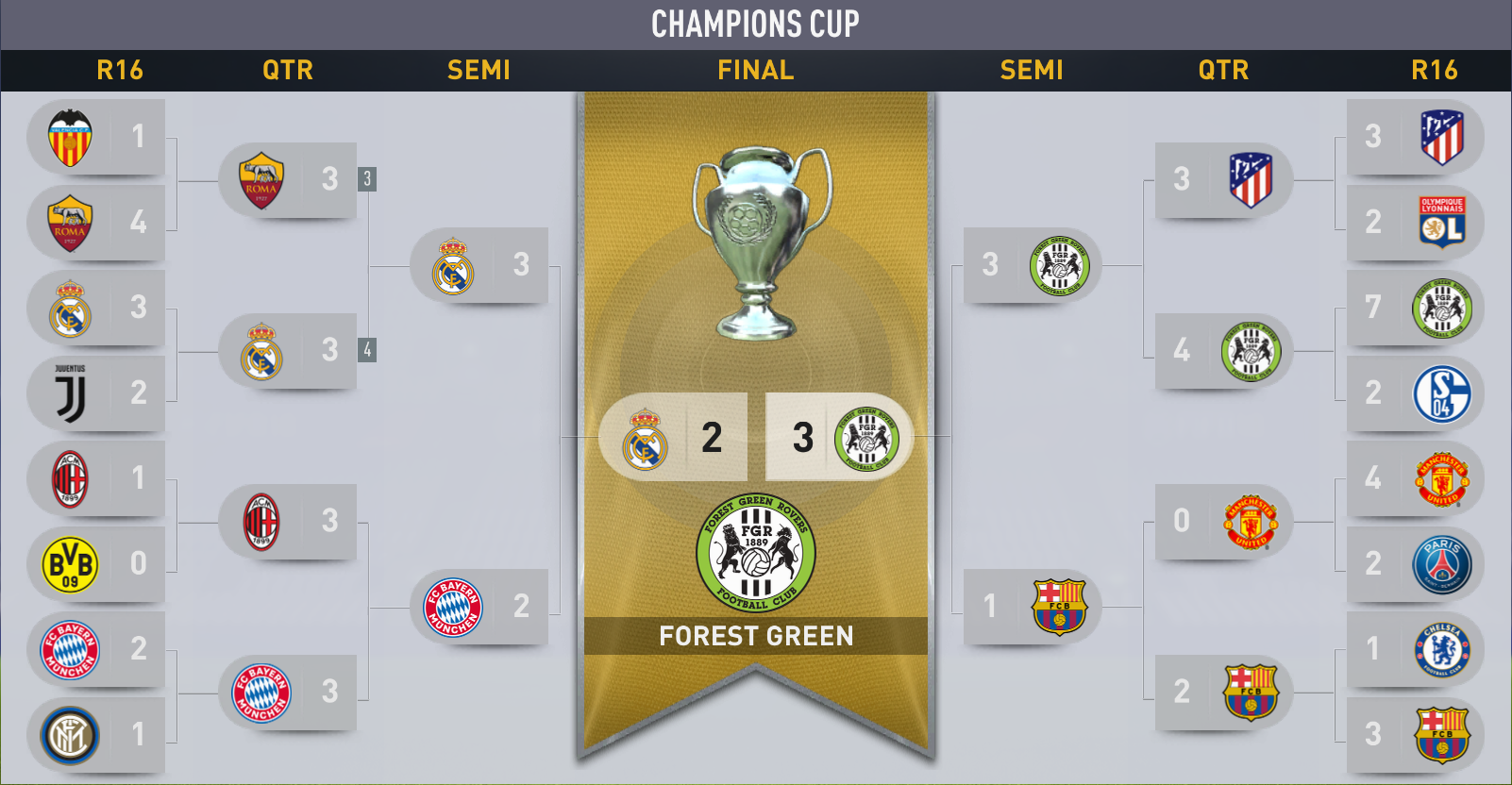 The perfect time for FIFA20 to go on deep sale.

Just the dumbest sh*t to get mad about.

I saw some PES 2021 Youtube content pass by, went on Amazon and saw that the game was already discounted from 30EUR to 20EUR. Delivery is scheduled for Friday

(honestly, I never got the outrage on Konami skipping this year. It seems like a far more honest approach than the usual sports games schtick of promising REVOLUTIONARY improvements and then charging full price for a roster update and Ultimate Team/ MyClub reset)

So the SpoonyPizza review I posted above is 100% correct, except for that fact that the refereeing against AI still stinks.

So yes, the players are more responsive when dribbling or performing skill moves, and shielding the ball has been nerfed a bit. Which are definitely improvements. That nerfing has highlighted the bad refereeing even more though: you lose the ball more easily to the AI, but you get a foul when trying to steal the ball from them.

The roster updates are a joke for the smaller competitions by the way, as in NOTHING has changed since last season for the Belgian league. I mean, it's nice that I can still play with Kompany and Chadli at Anderlecht, but come on Konami!

All that said, I'm hooked again because PES.

Oh and Football Manager 2020 is still available for FREE on the Epic Game Store, until 24 September.

I'm still tootling around with the FIFA 20 realism mod. I've been a total PES partisan for years now, but I got so annoyed with PES late in my experience, I wonder if I'll give this year a miss. Not that FIFA avoids all of the same issue that frustrates me, but having the sliders available to me feels like it allows me some flexibility.

I just fin it amazing that in 2020, I can't get a game that just puts out a difficulty level that can fairly be described as "You vs. the AI, the ratings are the ratings, thazzit." If that means I win every game 14-0, I'm okay with it.

If I never have to play another one of these games where Crawley Town plays as well as Bayern Munich just because of the difficulty level, it'll be too soon.

It's just funny how both of these games do a few things better than the other, but neither does enough better to really claim the crown. Crossing in PES is better, the GK's are just infinitely better, but I think FIFA's on the ball game is slightly better, if hampered by the fact that pace still makes way too much of a difference. FIFA 20's AI defenders can be tweaked to feel less insanely psychic than PES's and because of the sliders, I haven't encoutered any of the rage-inducing moments I found in PES when a tired fullback with 70 speed ran down a fresh substitute with 90+ speed. I don't know if I could answer which game has better defending, as neither title seems particularly great at it (although on any reasonable difficulty level, I've noticed FIFA's AI teammates are genuinely useless in defense).

FIFA has a bad case of feast or famine AI passing, I've noticed, as some very minor slider tweaks seem to end with the AI either robopassing at a 90%+ rate (related to the terrible teammate defensive AI) or literally kicking a 20-yard backpass 5 yards.

And yet, I keep buying these things every year. Honestly, I can't make fun of Madden fans.

(Also, I'd argue that Spoony's example of "Bad Arsenal AI" is actually 100% realistic.

With the COVID situation I should probably let go of my console-only policy for soccer games. It's been 6 months since we last got together and played some local couch matches now, with no sign of things getting better soon. Next year, if they don't have a vaccine, I'll get it on PC and finally get to spend more time installing mods and add-ons than actually playing the game

EDIT: Alright, my early review. I am now very bad at this game and the AI is still way too timely in the tackle in a manner that means the actual quality of defenders appears to be pointless.

But dear GOD, I am bad. That video review said "step a level up" and I might have to step a level down. I am genuinely terrible at this, cannot break the AI down at all. I'm 2-0-1 in three games, and it should probably be 1-1-1.

Give yourself a break though. You're coming not just from PES 2020, but from The Other Franchise. Creating chances is all about feeling how far you can dribble/pass without losing the ball, and that takes a while to grock.

Well, we'll see. Version 3.1 of the FIFA 20 realism mod is coming out soon, and honestly, just the ability to adjust sliders to make the game more of what I want really is a huge sell for FIFA. I'd love it if I had some rudimentary ability to edit how PES plays, so I could address some of these frustrations better.

EDIT: Genuinely shocked at how terrible I am at PES now. I guess I'm a Regular-level player now, because Amateur is absolutely brain-dead AI. The borderline-psychic defenders, no matter their actual ability are consistently infuriating though.

Oh, and the timers in practice are just stupid. There needs to be a non-challenge way to learn some of these mechanics.

I may just be getting old, because PES 2021 feels like SF:V felt for me: A game where if you're not going to invest 60+ hours of practice learning all the little intricacies and what not, you have no chance of even basic competence.

It also feels like SF:V in the sense that the skill moves only have any chance of working if executed in a specific window of time and place, down to the frame. And I have no idea how people have made Manual shooting and Advanced Through balls work.

I will say though, the AI passing in PES is 10,000,000x better, and more realistic than FIFA. Although it does rely on the "lump it up to a big striker" gameplan a LOT.

I will say though, the AI passing in PES is 10,000,000x better, and more realistic than FIFA. Although it does rely on the "lump it up to a big striker" gameplan a LOT.

I played Manchester City today on Regular, and this was their primary attacking gameplan. With Raheem Sterling. This does not bode well.

Alright, I played a lot tonight, and I'll describe the issues like this:

PES has plenty of issues. But so does FIFA.

I was playing Liverpool in the Carabao Cup Final, and they had Dejan Lovren get sent off for a terrible tackle. They didn't make a sub, and moved Mo Salah to center back, with no noticeable impact on gameplay.

This is what I f*cking mean when I say I'm so tired of playing a difficulty level, and not a team. By his ratings doing that should have been suicide. Instead, because Salah is fast, he made several solid defensive plays before we barely managed to win the game 3-2 (I also forgot to mention that another major FIFA problem is that players you're not directly controlling basically do not defend, while all 11 AI players will defend the ball).

My choice isn't "which game is better?" it's "which game's obvious horsesh*t is less infuriating?"