Actually, I've dipped my toe back in for a bit. It's quite the same: one of my very favorite designs coupled with an absolutely crap community. Basically, every game in three is satisfying, and that's actually giving it too much credit. I play Blind Draft, and most players can't handle champ select. Or once you get in game, some players simply start wandering off. It's like many of them have never played before, and then the vitriol starts. Since I usually play supports, it's really depressing, since I can't make up for loose cannons with kills.

I've dipped into other MOBAs since playing League and they all have that in common. Essentially, if you queue up solo you're rolling the "am i gonna have fun" dice every time.

I haven't played League in 3-4 years now but I occasionally reflect on how much game/champ knowledge I still retain.

This might sound weird, but does anyone still have me on their friends list? I'm almost positive I'm Hobbes2099, but I haven't played in over 5 years, it would make sense for my user to get deleted

I uninstalled a while back.

Looks like an older thread, but anyone still playing?

I threw in the towel years ago when it came to MOBAs. I played thousands of hours of Dota, loved it, but it poisoned me. I'd get so angry, and people sh*t talking would tilt me so hard.

I reluctantly installed LoL to play with some friends who were really chill and loved the game. I've logged about 200 hours since then, and through the ups and downs, eventually came to really love the game. I love the characters, and the brighter visuals. The mechanics feel so much broader than Dota, with champions having really cool playstyles that you don't see elsewhere (my favourite is Bard).

I do feel like I'm a bit better than bronze, which I seem to be stuck in. I love to play support, but it's a roll of the dice whether I get a competent laner at this rank. I've started experimenting a bit more with jungle, as I feel I can make good calls about who is winning and where to apply pressure. Nunu is my absolute favourite here, because it's just so fun zooming around with snowballs!

Not much else to say, I'm just surprised I'm having so much fun despite swearing off these sorts of games years ago. Keen to learn more.

I've linked my account to Prime gaming for rewards a few times. But I still haven't reinstalled or played in years. Very little time for games I can't pause with 2 kids now

I used to play. A LOT.
But just like you, A_U, I got in too deep and decided to cut off cold turkey.
Fast forward about 7 or 8 years and I've dipped my toe once again.

I can tell you guys that my button smashing prowess has aged poorly.
My brain hasn't re-clicked completely yet, so I still play blind-pick, unranked; where bad or mediocre players are called out almost not at all.
I play a few games late in the evenings (11ish or so); look me up, hobbes9999 (my original account hobbes2099 is somewhere limbo).

Small update, I'm solidifying my "main" role as support (with a sprinkling of top, because I LOVE Sett and Nasus).

I've been playing a lot of Senna. While she doesn't feel as consistent as some of the other supports in the game (Leona, Morgana, Alistair, Lux...), I love her theming and ability to scale hard into the lategame. It's like having another ADC!

I've also started playing Maokai support. He's interesting, he didn't appeal to me at all to start with but I think he's a bit of a sleeper hit. All of his abilities slow, so grabbing an early imperial mandate is just ridiculous value. His seed toss can deal 20% max HP, and it's on a 6-7 second cooldown. His stun also has a near-infinite range - it has a pretty tight engage range, but once you're on, he'll follow through flashes and displacements no matter how far they may move away (you're also un-targettable during it!). It's impossible for enemies to dodge it.

Last but not least, I pulled this wonderful skin for one of my supp mains. I was saving up for it with the event pass, but now I guess I'll put those points onto a Senna prestige skin!!! 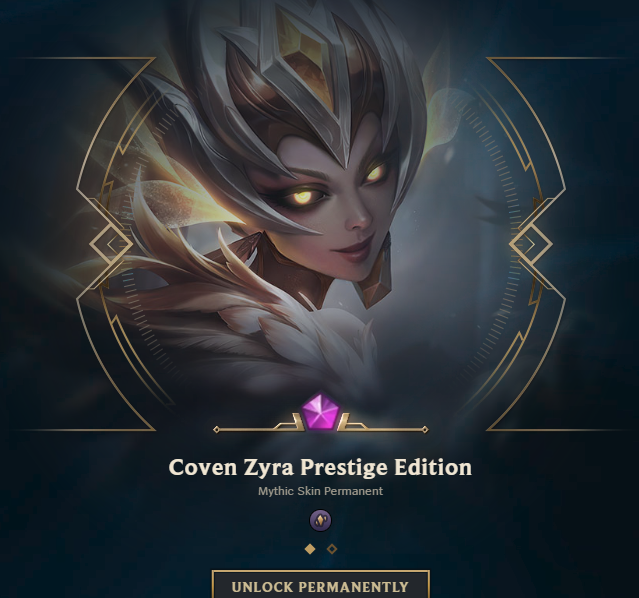 I installed Wild Rift this week. Since prime gaming was giving rewards for that too.

Still working my way through the tutorial quests, which have a couple of vs AI games. My comp stomp skills are still good. Got Ahri as my first unlock and it's like riding a foxy bike.

I did install the desktop game a few months ago too. Never really had time for a match but I opened all my prime gaming stuff and tried to figure out the weird skin currency thing. Traded in some duplicates and unlocked some new stuff. Still have 3 super chest things with 30 day boosters on them. Maybe some weekend I'll open one and play a bit.

But so far Wild Rift seems much quicker and maybe manageable to play from time to time.

I really love the mirrored lanes thing. Is that an option in the main game now too?

I don't suppose we have a guild for mobile? Anybody else playing?

I need to mix it up and try some other champs. But I've just been going through those starter missions which keep having me do PvP matches. And I keep winning mid and keep getting on the right team I guess. 18-1-17 through 3 matches for me. But 2 of those were 48-1 and 59-1 as team. Had some carry from duo and solo lanes, wow. Other one was like 31-11 so still we were in control.

I was convinced to play again last weekend. My first two games in nine years...

Not sure how much I'll play, but it's installed at least if a group does get together.

Yeah I installed it and got all the Prime Gaming goodies the last few months. But I haven't played an actual game yet. Don't think I can really devote time to a game that takes 30+ minutes a match with no pause, with two young kids.

Oh, I forgot about the Prime Gaming goodies!

I haven't played too much recently, but I was playing regularly six months ago. I ought to dive back in and see how they've improved things.

i was thinking about logging in tonight. im not sure if i played with many goojers or not, but my username is hattrick22. I think it's been about 4 years since i've played so it will be interesting!