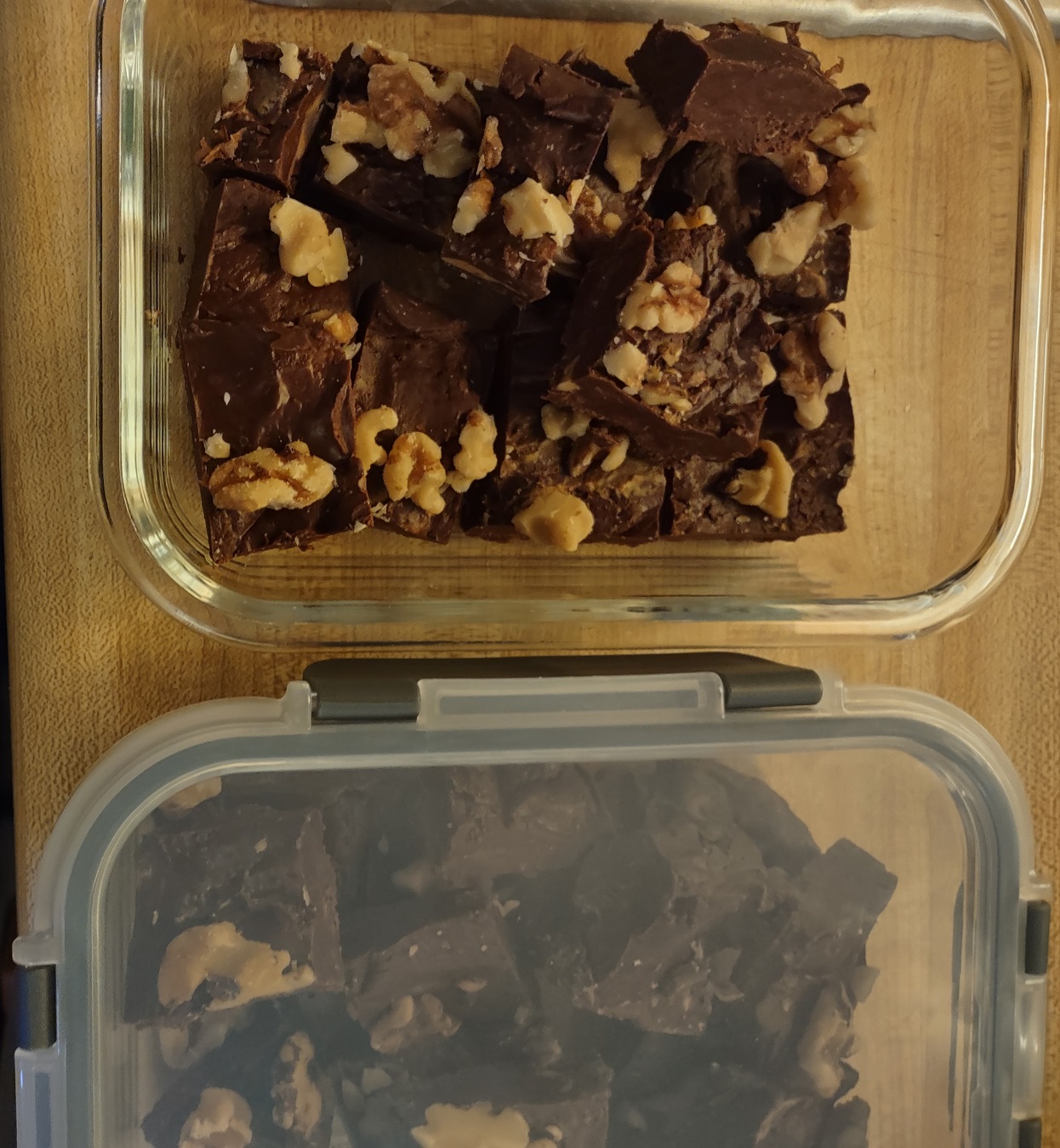 microwave chocolate chips at 30 second intervals until melted.
mix in peanut butter.
Line a pan with parchment paper and pour in fudge.
place in refrigerator for 30 minutes
Cut into cubes.

Anyway these things came out great. Way better than I thought they would be. I have like 5 fudge recipes I want to try and this was the easiest so I tried it first. Made enough for two containers and one is almost gone. So good. So easy.

I'm making the food lab weeknight chili recipe today. Excited to try it! Found all the dried chilis I need for the chili paste.

I'm making the food lab weeknight chili recipe today. Excited to try it! Found all the dried chilis I need for the chili paste.

Here is the chili paste recipe:

I don't think the ground beef weeknight one from the book, but here is the general Serious Eats article:

I've made Serious Eats' Texas chili con carne a couple of times and it's always been amazing. Starting with the dried chilies makes so much difference.

I finally got whetstone sharpening down along with finishing the knives with a leather strop. Previously had used the Apex knife sharpening system thing. Did like 10 knives today some from the kitchen and some fillet knives. Some high carbon Japanese steel and some softer German steel and whatnot. Very satisfying because I had a little trouble previously despite buying all these fancy Japanese whetstones, a stone fixer, and all that stuff. I know I can do it now without thinking about it too hard.

Missing a lot of arm hair because it was fun to shave it off...

Ah, shaved arm hair is a tell police look for on traffic stops and such...

So how do you set and maintain the angle with a whetstone? I use an Apex today but have also used fixed ceramic rod systems and the like. Just curious if there is a simple wedge or something for whetstones, because I always have trouble with maintaining the angle throughout the stroke.

Ah, shaved arm hair is a tell police look for on traffic stops and such...

Where does it sit on their threat priority scale from "muttering to oneself about how they'll pay, they're all gonna pay" to "being a black person just minding their own business"?

Some might make you get out of the car and use it as an excuse to search for a knife... In MD, anyway.

So how do you set and maintain the angle with a whetstone? I use an Apex today but have also used fixed ceramic rod systems and the like. Just curious if there is a simple wedge or something for whetstones, because I always have trouble with maintaining the angle throughout the stroke.

I got these angle guides to basically start the angle on each run, and eventually I kinda started eyeballing it and feeling it as I went through a knife which seemed to work. I did 18 degrees for the German style knives and 15 for the harder Japanese knives and the softer fillet knives. I didn't rubberband the guides to the stone because you sorta want to use the whole stone and they get in the way.

I only stopped using the Apex because I would have needed to buy a fixer for it and one of the grits came unglued on the thing. Also, I had the cheap one which doesn't stick very well with the suction cups. So, I was looking at upgrading that or just go down the whole wetstone rabbit hole. I'm young enough where I felt like it was worth figuring out and practicing a bit. It's a more satisfying process and quicker to do a knife, so I'm happy. I'm probably not getting them as sharp as you could, but they're definitely sharp enough to do the paper thing.

I use the suction cups on glass and put a little water on them first. Works great.

Very cool outcome and thanks for the info!

My knives need a round of sharpening. It's a lot harder to find time to do it with a 1-year-old toddling about...

Sunchokes are my new favorite thing. We have a really good farmer's market here in Newport. Sliced them thin, tossed them in olive oil, salt, and pepper and then roasted them in the oven. Threw those on a salad along with some sauteed wild mushrooms and sunflower seeds. Did a simple food lab lemon and olive oil vinagrette. Best salad I've ever made. 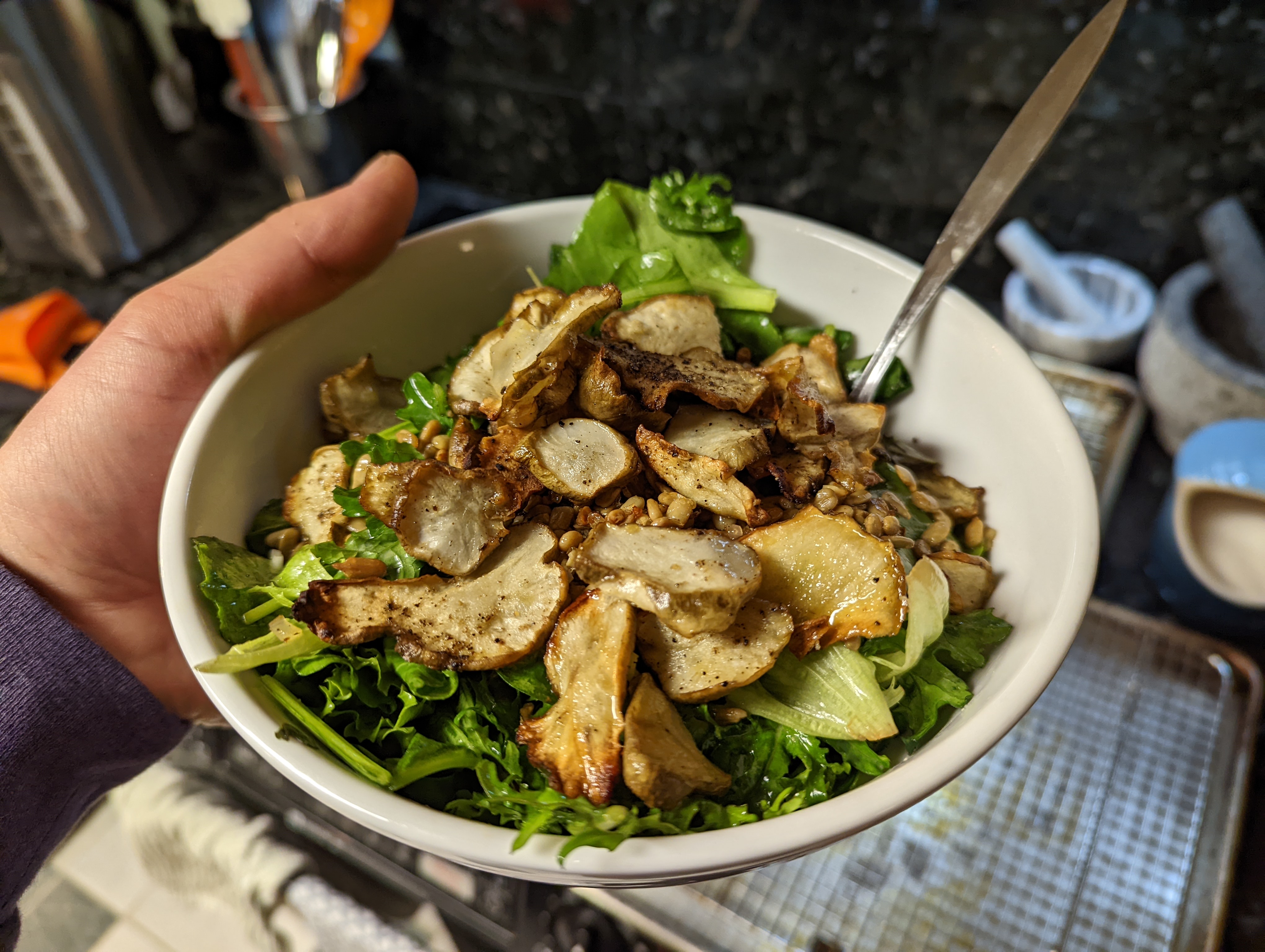 Made the Saturday White recipe from Flour, Yeast, Salt, Water or whatever that book is called. I finally got all the plastic tubs and proofing baskets to do those recipes. I am using 1 oblong 5 qt Le Creuset instead of 2 4 qt and doing 1 loaf after the other. I can't justify buying a couple more tiny Dutch ovens just for this. I got long proofing baskets instead of round to try and help me get more oblong instead of round loaves. The loaves still fight to stay pretty round...

I screwed up and left the 12 qt tub outside in the sun thinking it would help with the rising. It kinda started cooking the top and formed a skin even though it's so cool here at the coast. Still, the loaves turned out really nice. 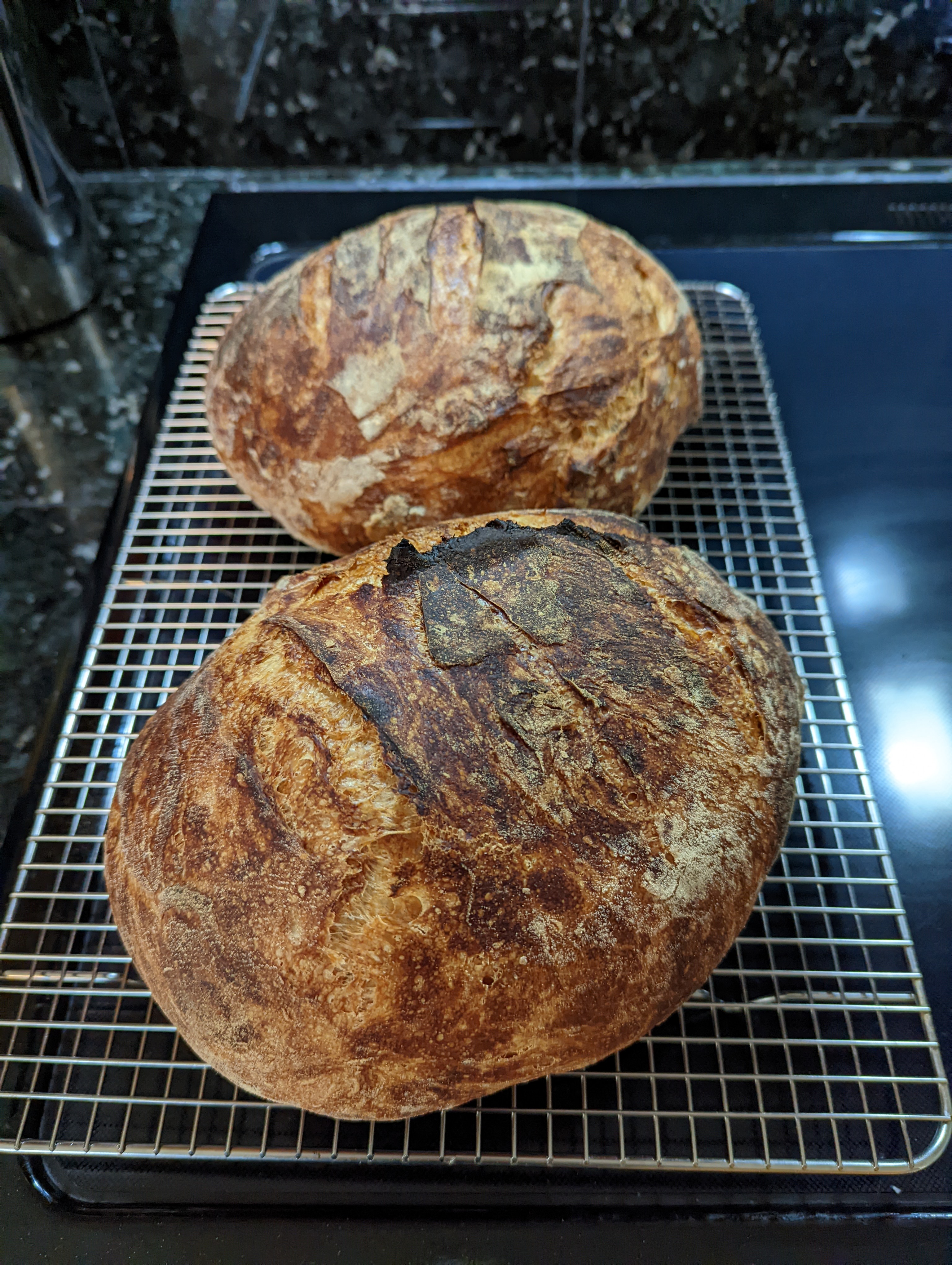 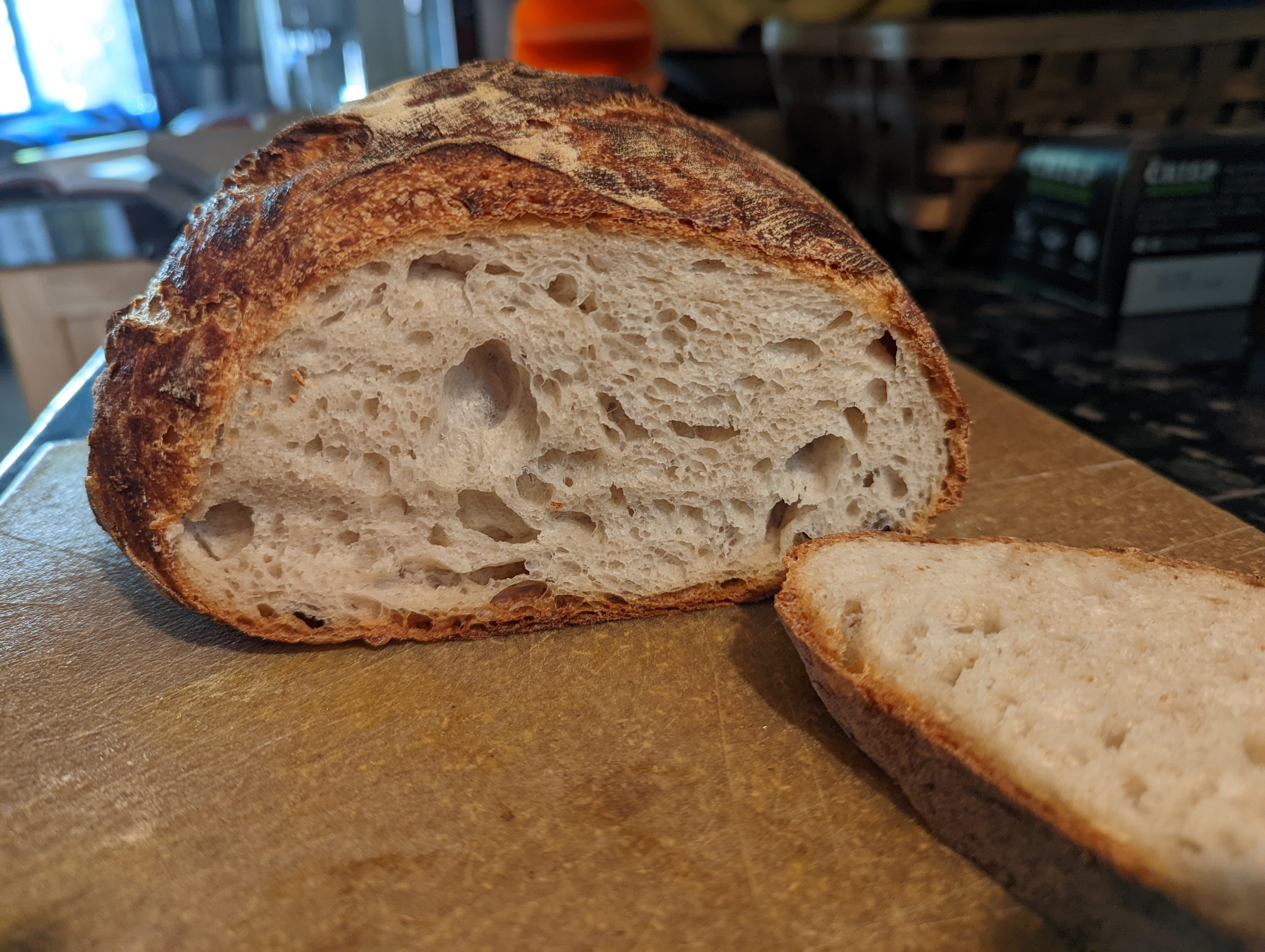 I'm the cook at a neighborhood community center, and my little project with the kiddos in the summer program has been keeping a sourdough starter. Every week or so I'll bake a couple loaves for snack time. It doesn't get as much rise in the oven as I'd like; I have to use the ingredients that the center has on hand, which means all-purpose flour instead of bread flour. Still, the kids like it.

There was a mistake in our last bulk order and we got a 40-lb bag of bran instead of flour, so I've been mixing a couple cups of that in with the flour. I like it, it makes for a slightly sweet, nutty, hearty flavor. One of my coworkers said, "this tastes like something that would keep you alive on the Oregon Trail or some sh*t."

Starting to get fancy with it, you can't really see it in the picture except in one spot on the upper right of the cut side, but the one on the left has little ribbons of cinnamon running through it. I think I can go a little heavier on the cinnamon next time, you can taste it a little but it's subtle.

The one on the right has raisins, I haven't tried that one yet. Going for a Raisin Bran in loaf form thing.

Turns out bran also works in place of bread crumbs in meat loaf, and let me tell you, a weekend of eating nothing but bran meatloaf sandwiches on bran bread will keep you as regular as Old Faithful.

I was going to post that, in spite of the nice nutty taste of the bran, you definitely want to rein it in.

I suspect that the bran might also be causing some of the lack of rise; all those tiny little flakes breaking up the gluten strands. Still, when a room full of kiddos cheer out loud for a snack that is literally just bread and butter, you know you're doing something right.

I'm mixing about three or four parts bran to five parts flour and that seems to be about right. It's still going to take me forever to use up all this bran, but it's a dry good, it'll keep.

What a fun project! Are you adding any commercial yeast or just using the starter? I've only done hybrid breads so far and my understanding is that you really need to use your starter at peak to get good rise if that's the only leavening. The other thing that helped my oven spring was getting better at shaping and really building up that tension.

I'm just using the starter. I've figured out a pretty decent routine through trial and error. On Monday I pull the starter out of the fridge, feed it, and leave it out at room temperature. First thing Tuesday morning I mix the dough and let it bulk ferment on the counter for the rest of my shift (5-6 hours, give or take). Last thing I do before I leave on Tuesday afternoon is shape the dough balls, put them in their proofing baskets, cover them, and put them in the fridge overnight. (I also feed the starter and put it back into the fridge until the next Monday.) First thing on Wednesday I take the proofing baskets out of the fridge and let them proof until they pass the finger-poke test, which usually takes 3-4 hours. Then I bake for about 35 minutes, rotating halfway through because our big industrial oven is old and heats unevenly. Then I let it cool as much as I have time for, slice, and serve it to the kiddos.

Since the work is spread among three days, it doesn't interfere too much with the things that are actually in my job description-- I'm not actually there to feed the kids, my job is to prepare low- and no-cost meals for low-income senior citizens. But I sort of dug my own grave on that one, the kids learned that if they forgot their lunch, Mr. Ben would scrounge up some leftovers for them, and then they learned that Mr. Ben's leftovers were tastier than what their parents packed them, and go figure, a lot more of them started "forgetting" their lunches. (-:

Nice! Have fun with the experimentation!

The best part of baking bread with kiddos is telling them where the bubbles come from. "So remember those tiny little guys we've been feeding for weeks? What do you suppose they do that makes bubbles?"

The reactions are priceless.

The best part of baking bread with kiddos is telling them where the bubbles come from. "So remember those tiny little guys we've been feeding for weeks? What do you suppose they do that makes bubbles?"

The reactions are priceless.