If everything went smoothly all of the time, it wouldn't be as enjoyable when everything goes perfectly.

If everything went smoothly all of the time, it wouldn't be as enjoyable when everything goes perfectly.

Ha, quite true, as long as the sim gives some feedback so that you can learn what you did wrong (which I think it did in this case).

I thought that I had already reduced MP about as much as he had, but maybe not. The noise was of course a bit more violent in my case. I don't have any video of my flight to go back and review.

I did, however, take a screenshot a few minutes before starting my descent.

Earlier in the day, above Auburn University.

This is the entire video from the tester. Unfortunately the audio on this video isn't great; the narration is overwhelmed by the engine noise.

I just read that Honeycomb Charlie rudder pedals will be available for preorders in July, possibly for August shipment.

I'm perfectly content with the Zibo -800 in xplane, but this could be an excuse to actually try to fly a real commercial flight on VATSIM in MSFS.

It seems like there are a bunch of folks that are upset over the pricing (because getting the entire 737 series will cost more than previously), but I think the price is very fair for the 737-700, BBJ and cargo variants. That's really all I wanted -- passenger, cargo, and charter ops are all covered.

Yeah. In my experience, flight sim message boards are the same cesspool as most gaming message boards. Its ironic because Flight Sim rivet counters consider themselves so superior to "gamers" to the point where some will belittle people who dare purchase the game on Steam... god forbid.. instead of getting a box of DVD's to install one by one.

I see this as a deal as I can ala carte the aircraft I want. I actually don't have interest in the -600 or the -900 for that matter. I suppose a MAX would be fun, but who knows when that will ever come out. Right now I don't see me getting the -800 since I have Zibo so I'm happy with just the -700.

I haven't watched any of the streams.. I'm hoping to get some info on performance though. Seems like every streamer has a 3090ti and the newest CPU. I'm waiting until Xplane 12 to come out before I upgrade my PC, so I don't fly like a slideshow

and just about the same reaction from customers.

Fabio, in his streams, has said performance is similar to what he gets with the FBW A320. I'm running a 1070ti, so I'll report back after I give it a go later today.

PMDG said post-release plans include a year or so of updates to the aircraft and that any updates that the other models get will also come to the -700.

I can confirm, it doesn't seem any harder on framerate than any other aircraft I fly. I'm just doing the tutorial flight from PDX - SFO, but so far everything works as advertised.

awesome. I'll grab it today and do my good ole KBUR to KOAK flight. I have to remember how to do the cameras in MSFS... so less intuitive than Xplane.

As I'm wont to do I've spent the last 90 mins or so fiddling with cameras and settings and not moving the aircraft.

1. Can't start C&D without stair truck attached. Not sure why you can't default the pax entry type to Jetway. You can default the aircraft type to not have airstairs installed, but the stair truck will still attach, even at the gate. Maybe because the gate types at KOAK are labeled as "gate small"? I can find another airport with larger gates to see if I get the same result.
2. As expected.. difficult to map non-standard controls. I'd like to map VNAV, LVL CHG, ALT INTV and SPD INTV buttons, but since those aren't regular commands I can't map them.
3. Can't figure out how to map reversers. I think I hacked it somehow and got them to work but we'll see when I land.

Performance wise, yeah.. again without actually flying, seemed to be no better/worse than any other aircraft and I loaded up at KOAK.

Just finished my first flight KOAK to KLAX in the 737.. overall it was a good flight. No real issues other than trying to get the gear to work. A gear lever control basically is a constant press of a button so if you have it mapped to "gear up" it constantly presses gear up, sometimes jamming the gear, and making it impossible to put the gear into the off position. I did find a workaround on PMDG boards which I will give a go next time.

Landing wasn't great.. the plane seems higher than it really is and I was surprised I touched down when I did. Very floaty.

Here are some screenshots.

Departing KOAK on the CNDEL5 departure. I fly from KOAK to southern california a lot, and I'm very familiar with this departure and it looked great. 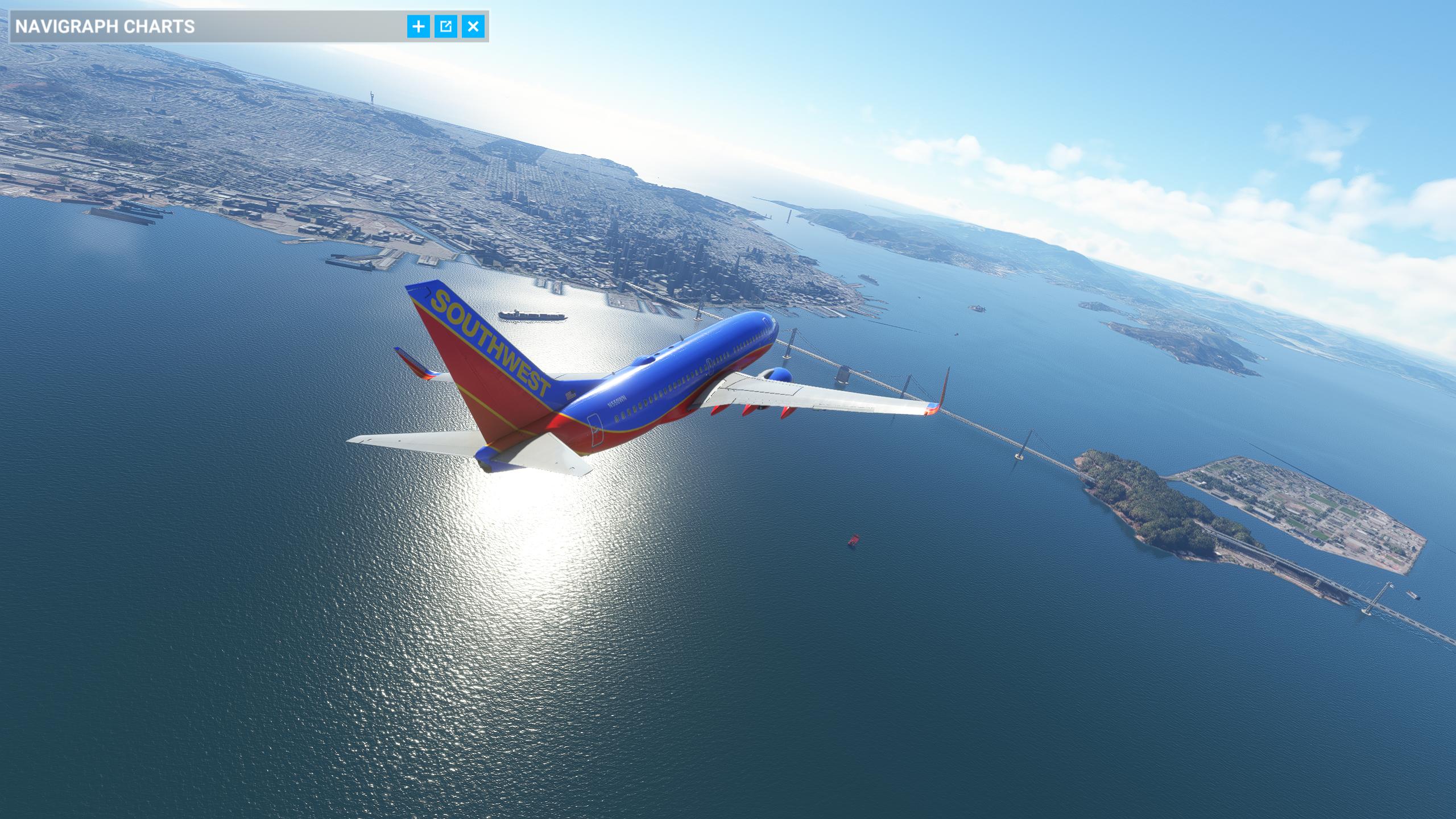 On the IRNMN2 arrival into KLAX. Its a tricky approach with a lot of altitude and speed restrictions. I'd say it did pretty well. Pretty high overspeed at SYMON and BAYST but I didn't input wind data so maybe that impacted it. Probably should have pulled the speedbrakes to make the speed, but I didn't bother. 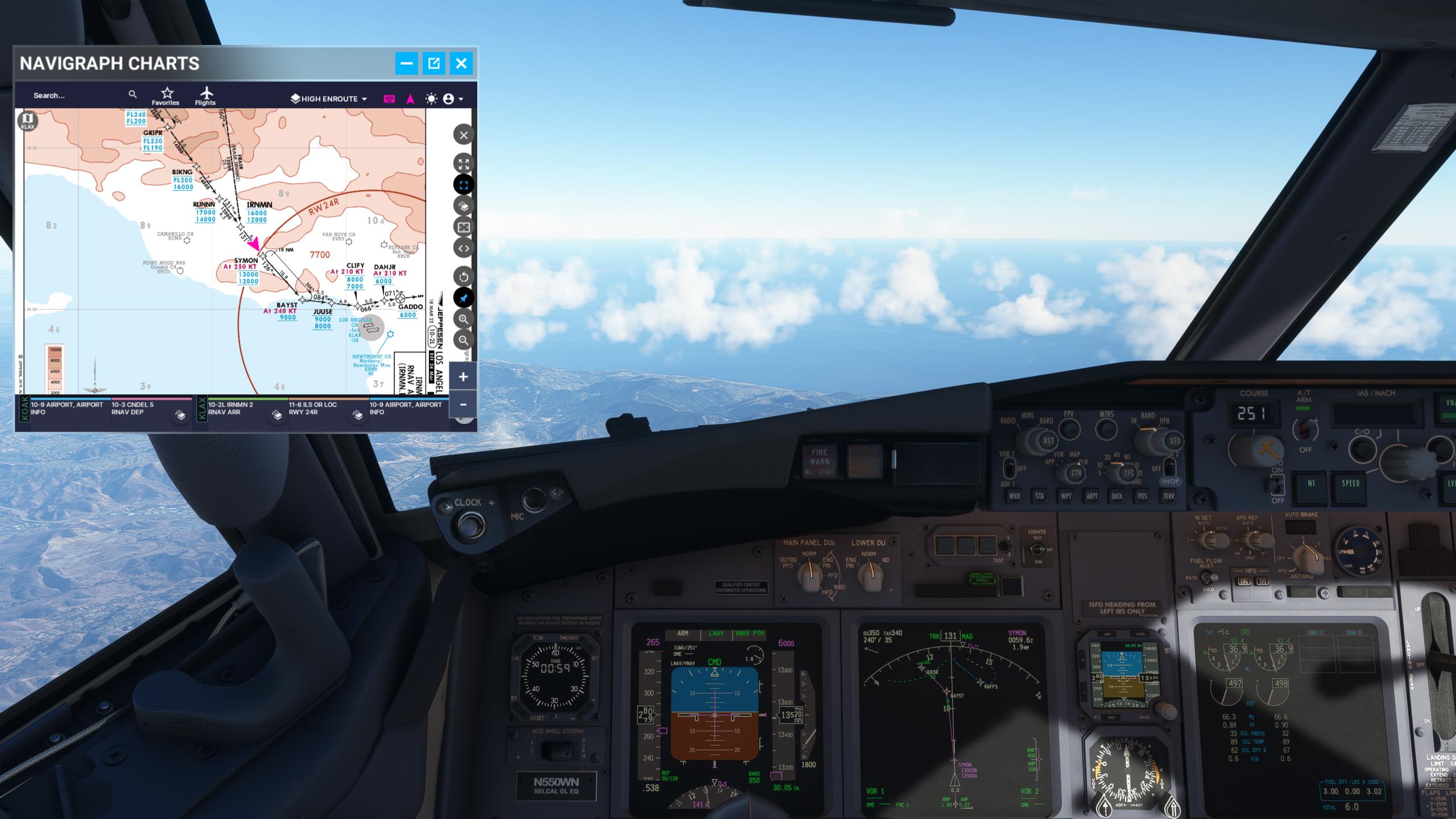 On the STAR about to make the base turn to KLAX, passing over downtown LA. 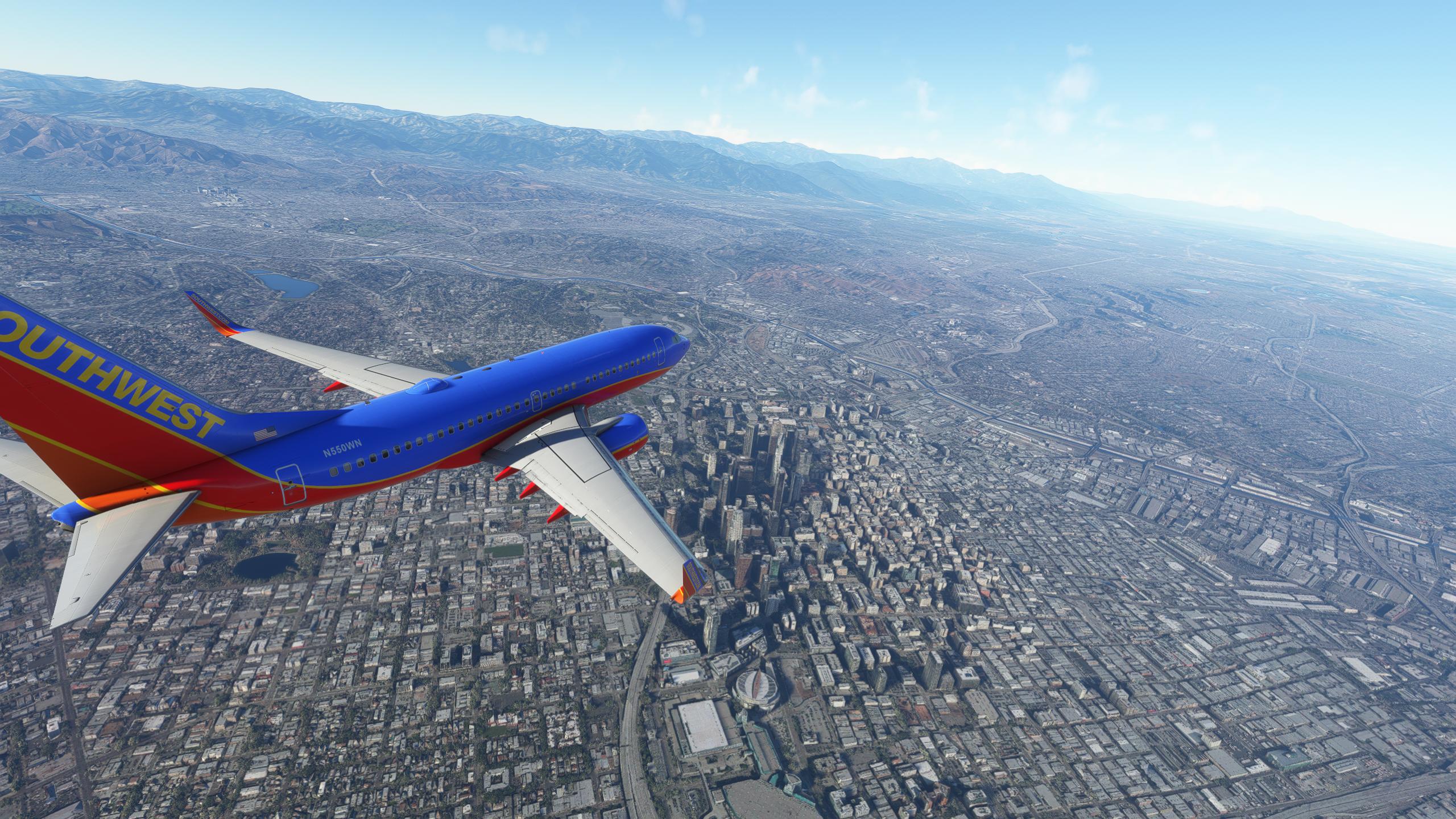 And on final onto 24R KLAX. 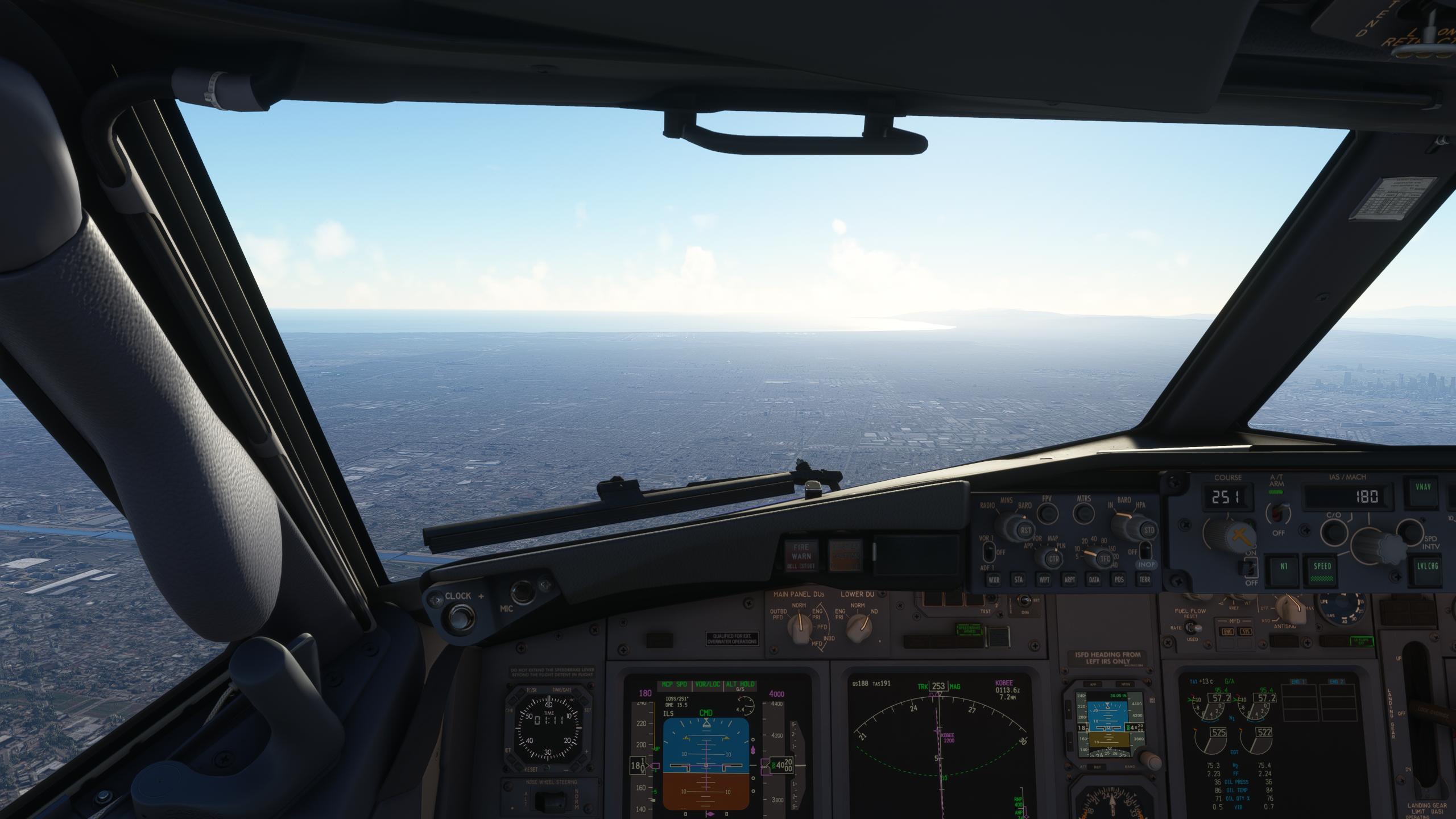 Thanks for that. I had all of that set except the reversers so I'll do that. As you can imagine the last 30 seconds or so is my real complaint

I was able to solve my Cold and Dark setup problem so that's good.

Finally braved my first VATSIM flight with MSFS and worked well enough. Its a good thing I waited for the 737 though as I'm familiar enough with the systems where if things don't work, I know how to correct them quickly.

Something is up with the VNAV and Autothrottle on climb... I think it has to do with the GW changing between pushback and lining up. The PERF INIT seems to reset itself because the fuel you burn in taxi even though its usually less than 500 pounds (out of a minimum of 14,000 or so), seems to upset the PERF INIT enough that you have to reset everything. 2nd time that something didn't go right on setting VNAV AP on departure. Could have been user error, but I'm pretty sure I'm doing everything right.

That being said, it is a pleasure to fly... comparing to Xplane/Zibo... I think its basically a draw. For me the inability to map my honeycomb bravo without a 3rd party paid app is a big negative that gets compensated for with the better visuals overall.

I will say that now that I'm flying out of larger airports, I'm actually quite disappointed in how poorly those default airports are laid out vs. the real thing. KBWI for example, a major Southwest hub is literally missing its normal-ops landing runway in the default. Its been fixed by users, but unless you have a Navigraph subscription, you can't actually load procedures for the updated airport. KBUR another major west coast hub, has office buildings for its terminals, even though the actual thing is basically a one-story simple terminal. Forget about the fact that every taxiway and gate # is wrong. My term that I use is that MSFS default airports are Beautifully Incorrect.

I've found with the 737 that sometimes I can't arm LNAV and VNAV prior to takeoff, but if I cycle the flight directors off and on, then it all works. I haven't really noticed any other wonkiness.

As for airport scenery, MSFS based it's airport generation on satellite imagery that's at least 5 years old, so it doesn't represent the current airport layout in many of the big airports. Off the top of my head, BWI (unflyably bad), ORD (missing an entire runway), LGA (the entire terminal structure is wrong), PHL (missing the taxiways and the runway extension at the start of 27L). I'm sure there are a lot more, but these are the ones that I remember offhand. Users have jumped in with custom scenery for a lot of the airports. Flightsim.to is the main site for MSFS freeware.

I'm also a big fan of the custom bridges that people have made, since the default's are pretty bad in many, many places.

That being said, Asobo did say they wanted to revisit the US next year with another update.

Yeah, I get it. KLGA and KORD have had reonvations in the last 24 months, but missing runways is pretty unbelievable. Its just crazy that I can pick out my house, but they'll forget to place a runway. KBWI has had 15R/33L forever.

I've made it a habit to check airports in Little Navmap before flying (even in Xplane), but it is still pretty annoying.

Is there even a freeware fix for KORD? I've looked and don't see one.