You can do it, Darkhaund! I’ve watched a few streamers finish Shadowbringers for the first time recently. It just re-confirms for me how excellent that story is. I’m really hyped for the announcement showcase on Feb 5.

I assume you've been unable to find time, Darkhaund, but if you need actual help and are on whatever data center Famfrit is on, you can look me up.

lol.. it has been difficult

I LOVE FFXIV.... I will try and push for it.
How can we party? I am on Aether Datacenter... and im on Sartaganas

It alas turns out Famfrit is on Primal, so we can't. But I did find an article about how SE engineers have worked on making cross-data center parties possible. Hopefully things turn in a good way to afford you more time, because ShB is pretty damn great.

It has been a bit since I did a glam drop. I've often joked that, since the Nier raids have broken the seal on crossovers, clearly Life is Strange should be next. Well, I feel like in 5.43, someone, somewhere at SE decided to do me, me specifically, a solid: 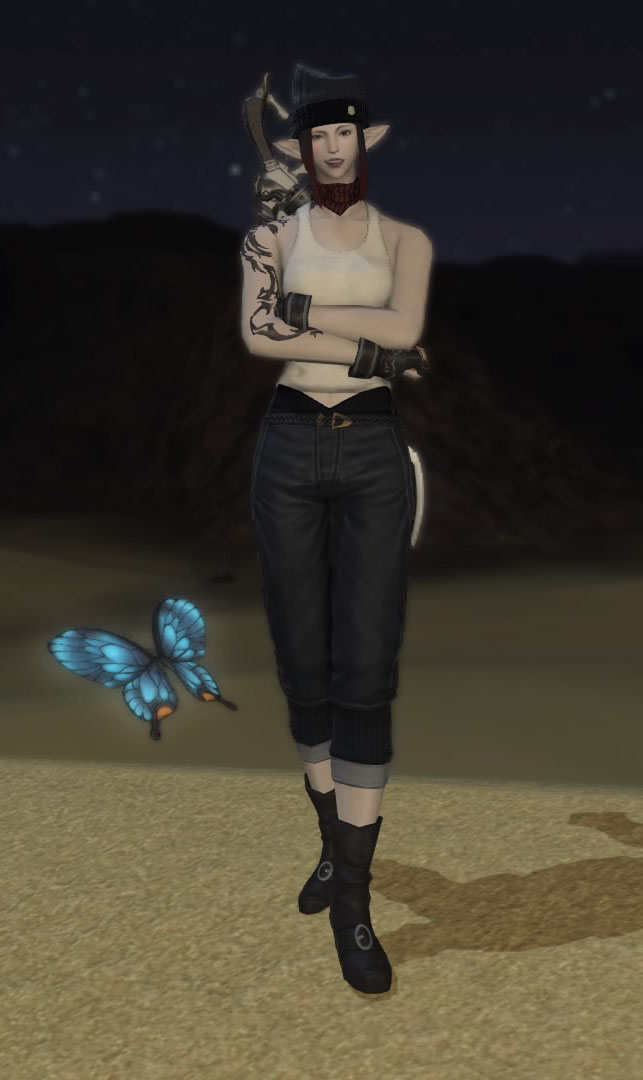 Well, okay, I've given it some idle thought, walking the dog, that sort of thing. Story-wise, I gravitate toward something like that aether in this mysterious other world is leading not to unbalanced elements, but unbalanced concepts, forces, and emotions, with each boss being LiS flavored manifestations and mutations of Anxiety, Grief, and Injustice.

For something more expansive, encompassing the entire series within the 3 Alliance Raid structure, I'd go in chronological order. Raid 1 is Before the Storm, the dorms leading to Blackwell Campus, then finally The Tempest performance stage (Final Boss: Mr. Amber). Raid 2 is the first game, starting at the junkyard, through the Dark Room, and finally downtown Arcadia Bay during the Storm (Final Boss: duh, The Storm). Raid 3 is the second game, the desert commune to the border wall briefly, into and out of the internment/concentration camp and then back to the wall (Final Boss: A Cop).

Gear sets could swap characters around, but for ease, Max is Fending, Chris is Maiming, Chloe is Striking, Rachel is Scouting, Warren is Aiming, Daniel is Casting, and Sean (Diaz, not Prescott) is Healing.

I love this trailer. Hype!

Breaking the post drought since I finally set aside a little time to play about with Explorer Mode. Not much time, granted: 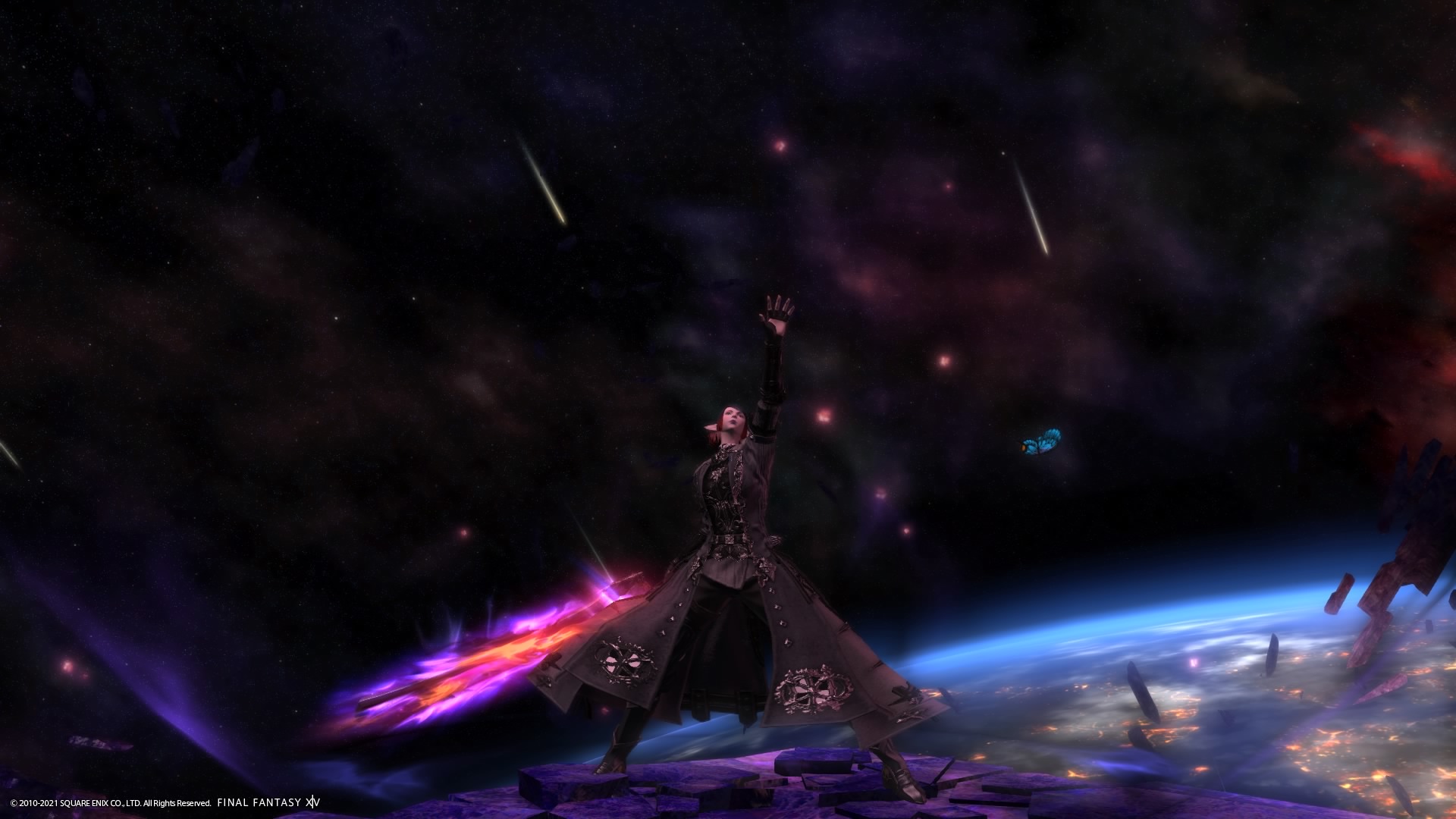 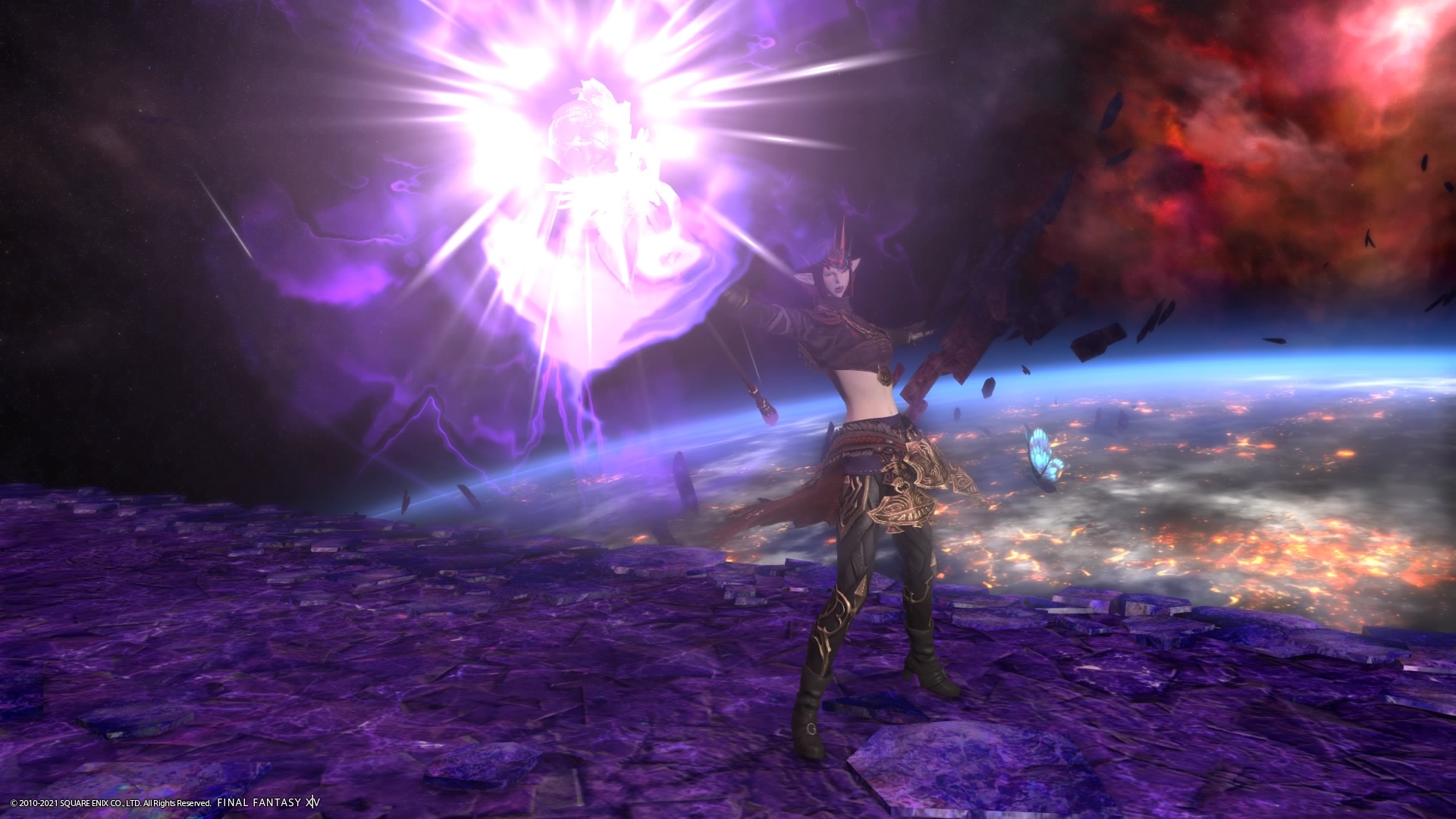 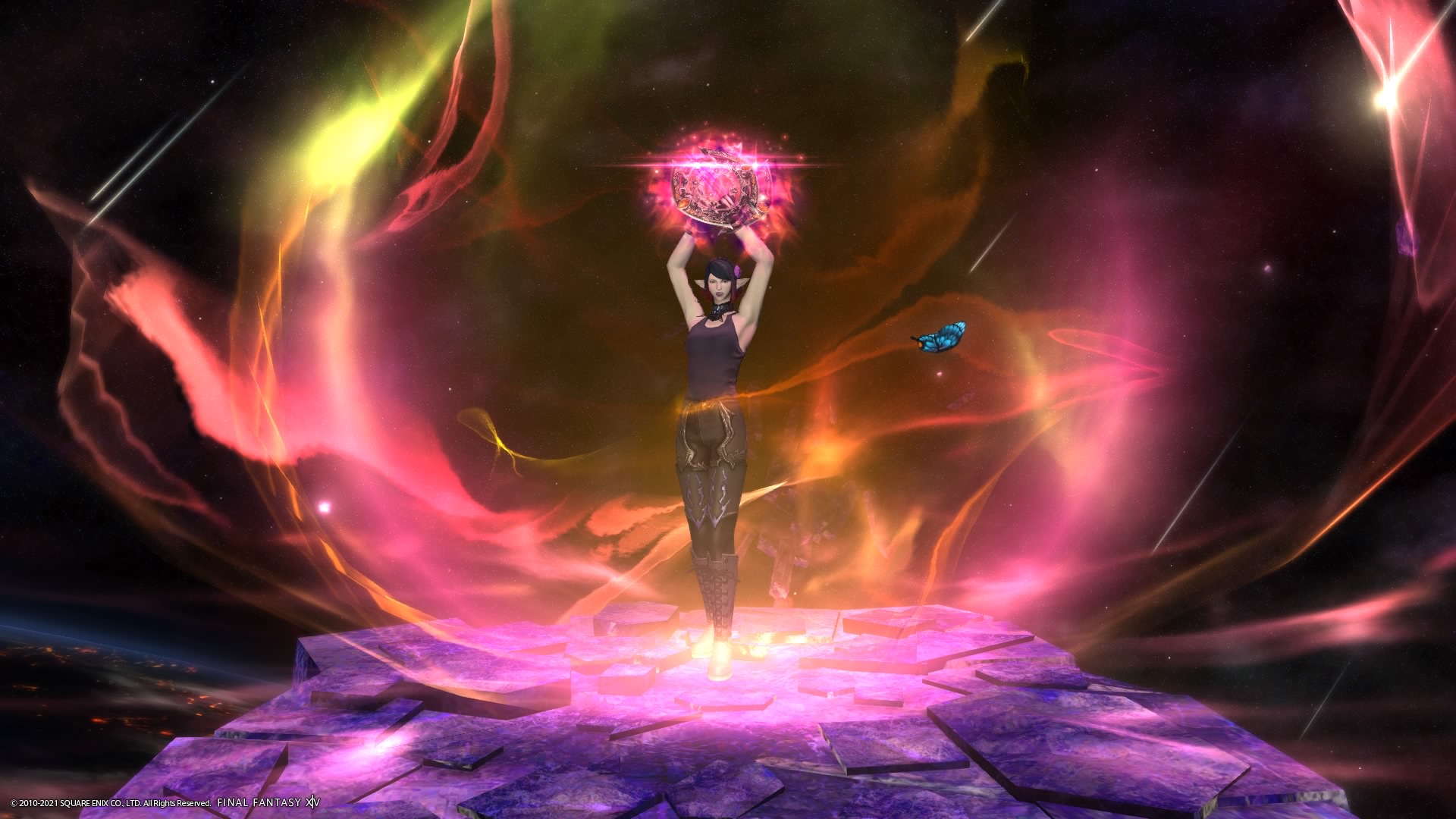 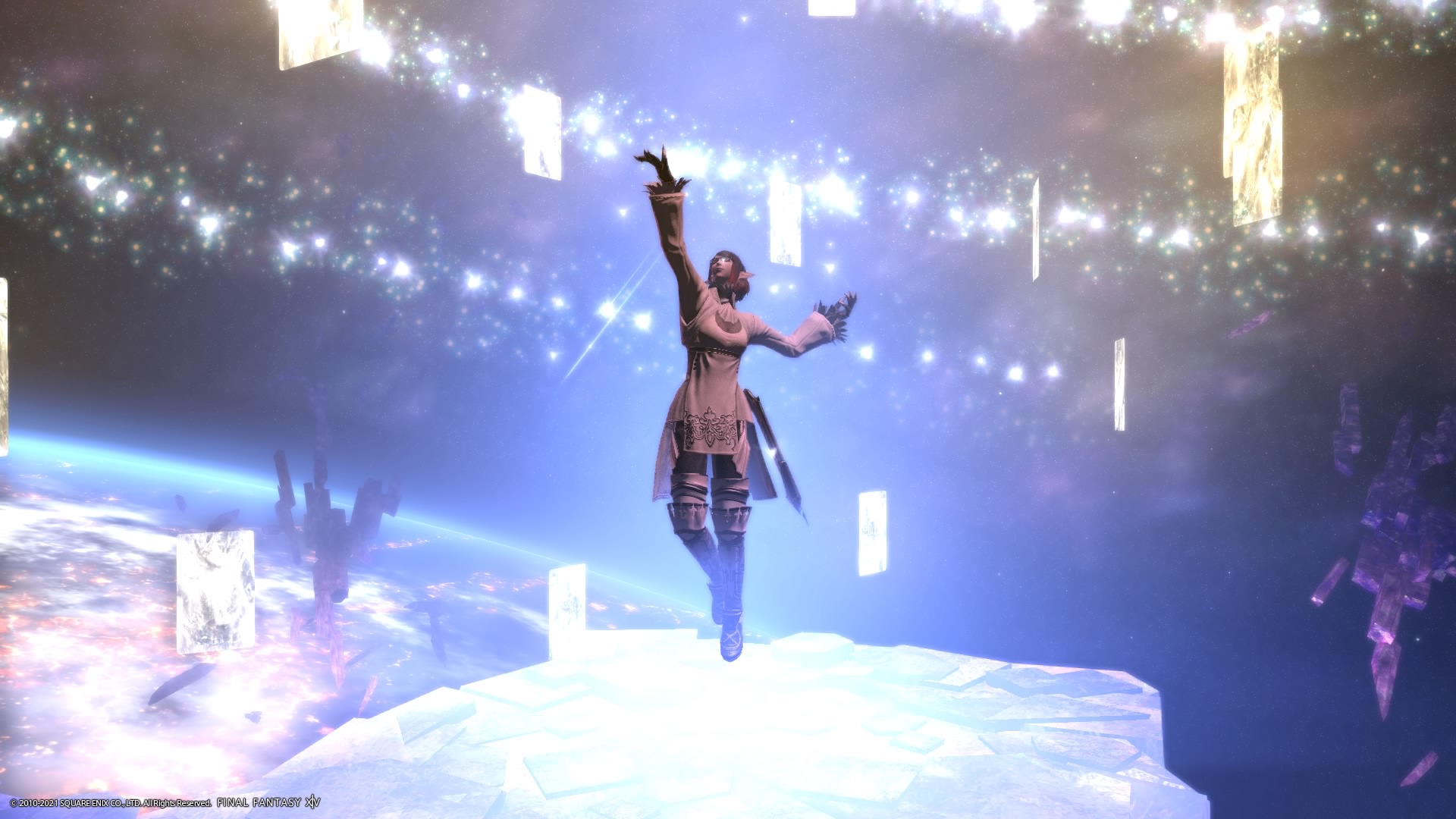 Oceanic servers!!! I absolutely adore this game, but I always hated the 200+ ping I'd get playing in Australia. It made some classes literally unplayable (ninja, machinist) and meant I'd never achieve top-tier DPS on others (black mage). So often I'd be doing high-end content and get 1-shot by attacks I'd clearly moved away from. Yeah, you do kinda get used to it, but this is amazing for me.

The new reaper class looks great (big Bloodborne vibes). The FFIV references are making me swoon, and the new farming island is just perfect for me as I love crafting. But OCEANIC SERVERS are the biggest thing I'm excited about. Totally unexpected. Woo!

I got caught up on MSQ this week. Now, I'm working on leveling up Weaver so I can start making cool clothes.

I should check out what cool things like minions or mounts I can craft now, at least.

I’ve got five of eight at 80. Working on the others with the Dwarf tribe quests. I also haven’t done much else with them yet though. I did gear up Culinarian enough that I could start doing the coffee biscuit levequest.

After an initial crafter leveling explosion in early lockdown, I haven't really been back to them. I'm also north of 40 million gil, so if cool clothes come along, I just buy them. But the crafters I know all attest that "omnicrafter" is the way to go.

I'm really bummed that they can't just extend the free trial of ARR and Heavensward to people who have prior trial accounts or prior accounts.

Yeah, I've seen people just make new accounts for the free trial since it had been years since they tried it previously

So I just began playing this, and about four hours in I'm having a great time. Tried an archer and a thaumaturge so far and really like the archer. Love how gamepad-friendly it is too.

Welcome to Eorzea! There's a GWJ Free Company on Midgardsormr if you're playing there, and we do a lot of chatting in the GWJ Discord's MMO channel as well. Feel free to ask any questions there, or here, as necessary.

Huh, I appear to be on Adamantoise, can I go to Midgardsormr with my current character?

You can visit Midgardsormr whenever you like by going to the main Aetheryte in Gridania, Limsa Lominsa, or Ul'dah, and choosing "Visit Another World Server."

Transferring permanently costs $18, unfortunately, unless Midgardsormr at some point becomes a Preferred World when they're trying to rebalance server populations. You can read more about that here.

You're also early enough in you could just make a new characters on the Midgardsormr server if you don't want to deal with the 'visit another world' thing. Though it's pretty easy to do so you might not want to lose your 4 hours.

Oh hey my little thaumaturge is on Midgardsormr! Name is Vasuda Shiva. How do I join you guys?

We got Veloxi sorted out.

I randomly scrolled through the early pages of this thread. Definitely an interesting look back in history. Once 1.0 came out, it wasn't long before posts dried up. Then it got more active as more info on 2.0 came out, the betas started, and the actual release. Lots of frustration at server issues. Also, amusingly, a LOT of talk about how difficult the dungeons were. Seeing people run out of time or wipe multiple times to Cutter's Cry was an eye opener. It also reminded me of how complex the job system used to be before they streamlined it in Stormblood. What surprised me most was how the Duty Roulette was added later, and it only included a subset of dungeons. People were stuck at various points in the story because nobody was running story dungeons. That's kind of bonkers to think about, given how great the roulettes are at grouping people up no matter which point in the story you're in.

The game's come a long way, the GWJ FC, while small, still keeps going, and I for one can't wait for Endwalker.

So the outfits in this game are something else. 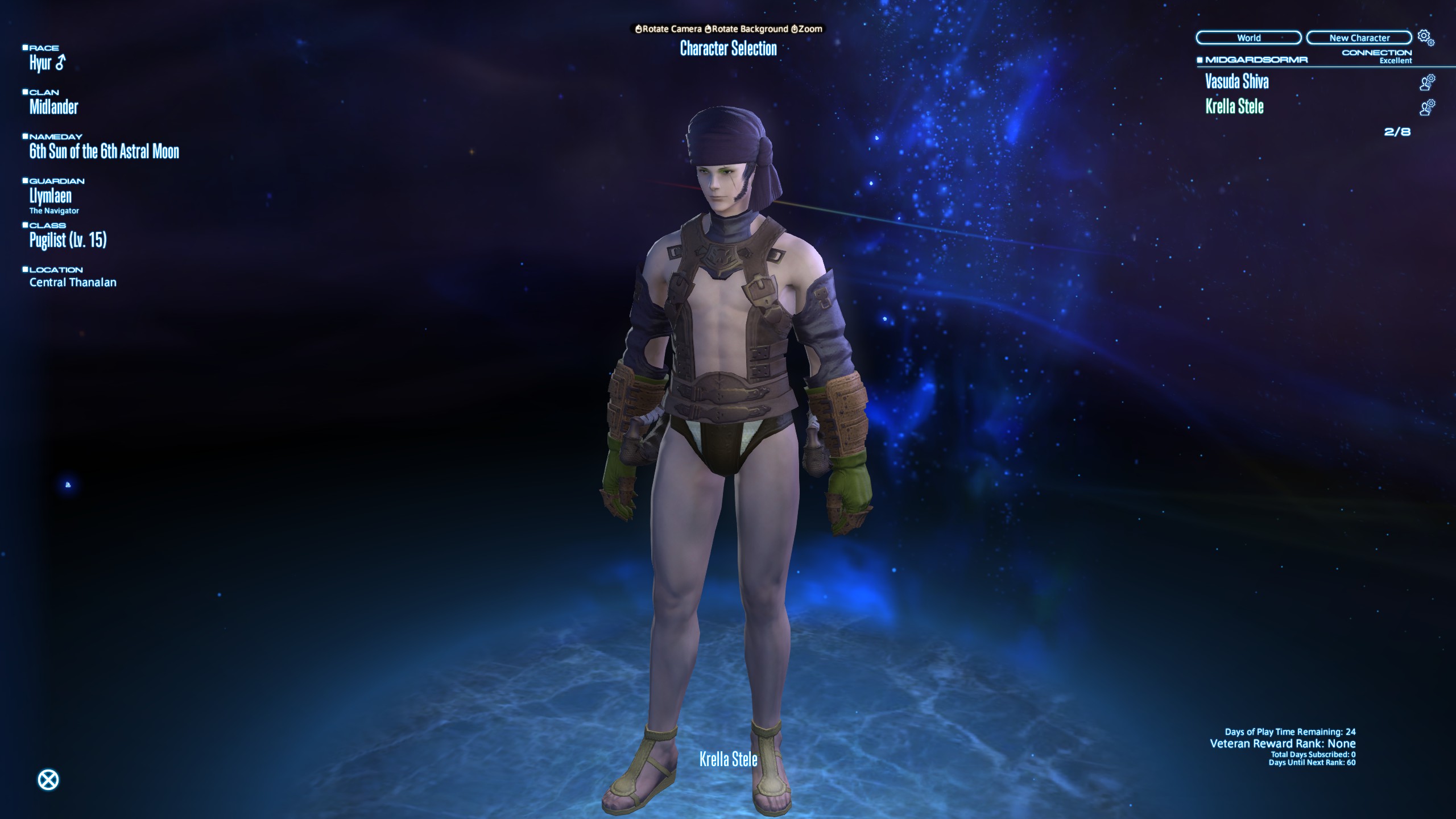 Hahah, yeah, the early armor sets can be quite... special.

Actually, it's even more special given how spectacular the fashion game is later on (other than needing more storage in the glamour dresser).

A rite of passage for all players

Don't worry, very soon you'll have options that will help you emulate all the latest and greatest Final Fantasy icons, like the legendary Jack (here pictured with Bestie, CHAOS!!!): 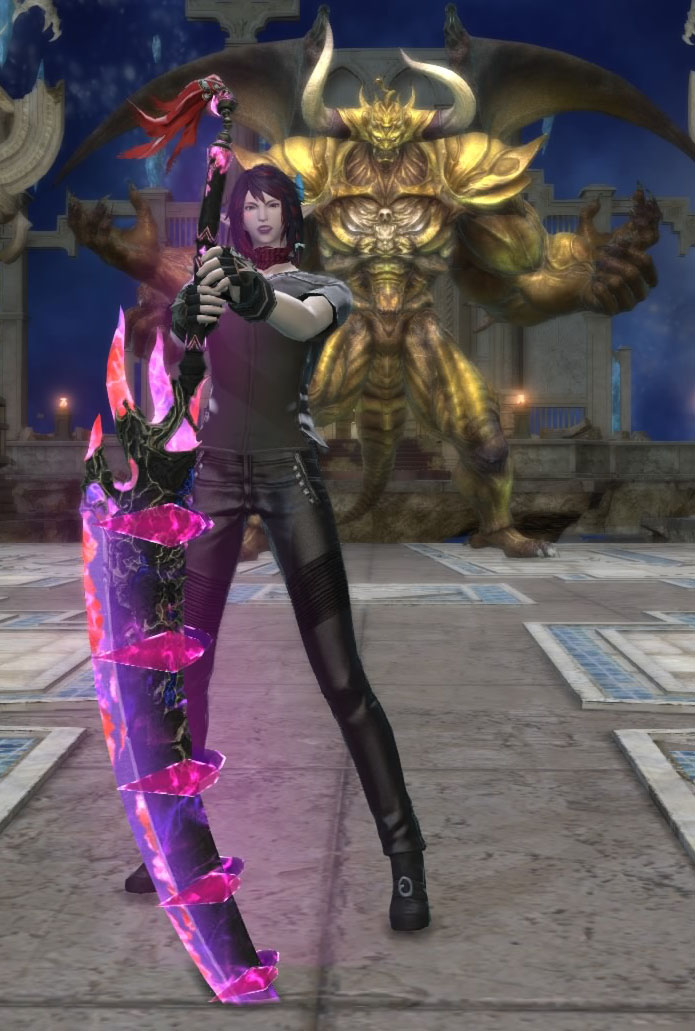 Honestly, one of the few games that has skimpy male outfits and not just females.

I'm leaving my FC in Malboro and transferring to Midgardsormr. Someone shoot me an invite if you see me on? Bernadetta Valdrast