Re-reading my post now when awake, I really needed sleep. Anyway I was asking if someone with the RTX beta could compare with my SonicEther PGTI shots. I got into the RTX beta, but since I have a 1080 I'm not able to even download the RTX maps. Otherwise I'd do the comparison myself, both seem good so far. I am very interested in seeing both working and seeing the pros and cons of them.

I can, but it won't be an apples-to-apples comparison since the RTX worlds each have their own different variant of shader - and some of them have taken quite liberal approaches to implementation, to showcase how lighting and color works (e.g. the various colored clays might each emit light). I haven't yet found a vanilla-like RTX resourcepack.

I think the issue with that video is it's from August 2019 and a lot has changed with PGTI and with RTX. I know in the last year PGTI has added water volumetric lighting so that the deeper the water the darker it is and the less you can see.

A better comparison I guess is Linus Tech Tips, but they're mostly there to do a hardware test.

I'm still up in the air in with my opinions on both.

Here is the new video on Minecraft RTX from the Digital Foundry guys. Posted like a week ago (and by me here a few days ago before the page switched).

And that's how an RTX card landed in my shopping cart.

And that's how an RTX card landed in my shopping cart.

A software-only version is already available for the Java edition of Minecraft. Look up Optifine with Sonic Ether (SEUS) PTGI.

Here's another thing I wish I realized long before today. If you're looking for particular trades with villagers but can't find that profession, you can craft a 'work block' for that profession, for example, a lectern for a librarian. Then you just find a villager without a job, plop the block in front of them and "boom" instant librarian.

If there no jobless villagers, build some beds.

Villages used to grow based on the number of doors. Now it's beds.

Here's another thing I wish I realized long before today. If you're looking for particular trades with villagers but can't find that profession, you can craft a 'work block' for that profession, for example, a lectern for a librarian. Then you just find a villager without a job, plop the block in front of them and "boom" instant librarian.

Ok this may just break the game.

Get a villager with no job. (Or one with a job that you haven’t traded with yet) Take them by boat somewhere safe away from the village. If they had a job they’ll eventually lose it. Plop down a lectern, check their trades. If they have a trade for an enchanted book, see if it’s one you want. If not, remove the lectern and they’ll lose their job again. Put the lectern back and check the trades again. I got lucky and got a Mending book trade on the third try. It’ll usually take longer than that, but eventually you should see the trade you’re looking for.

In ten years of playing Minecraft (on and mostly off) I have found my first End Portal. 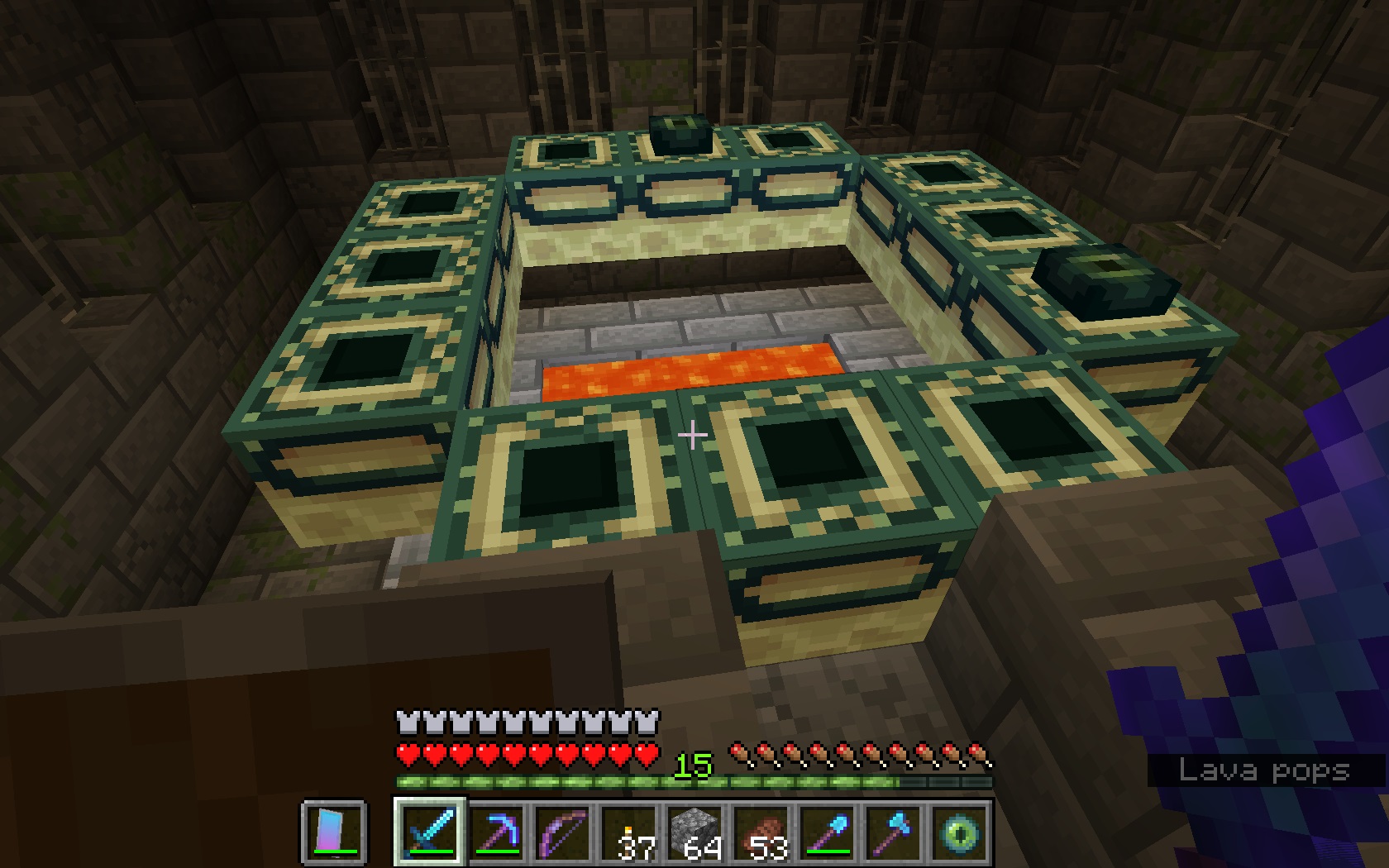 Before I go through it, I want to connect a new Nether portal from this room to my passage that I've set up between my two other Nether portals, but unfortunately that would mean building a path approx 250 blocks south and 250 blocks west, in this direction which is currently nothing but lava as far as I can see. 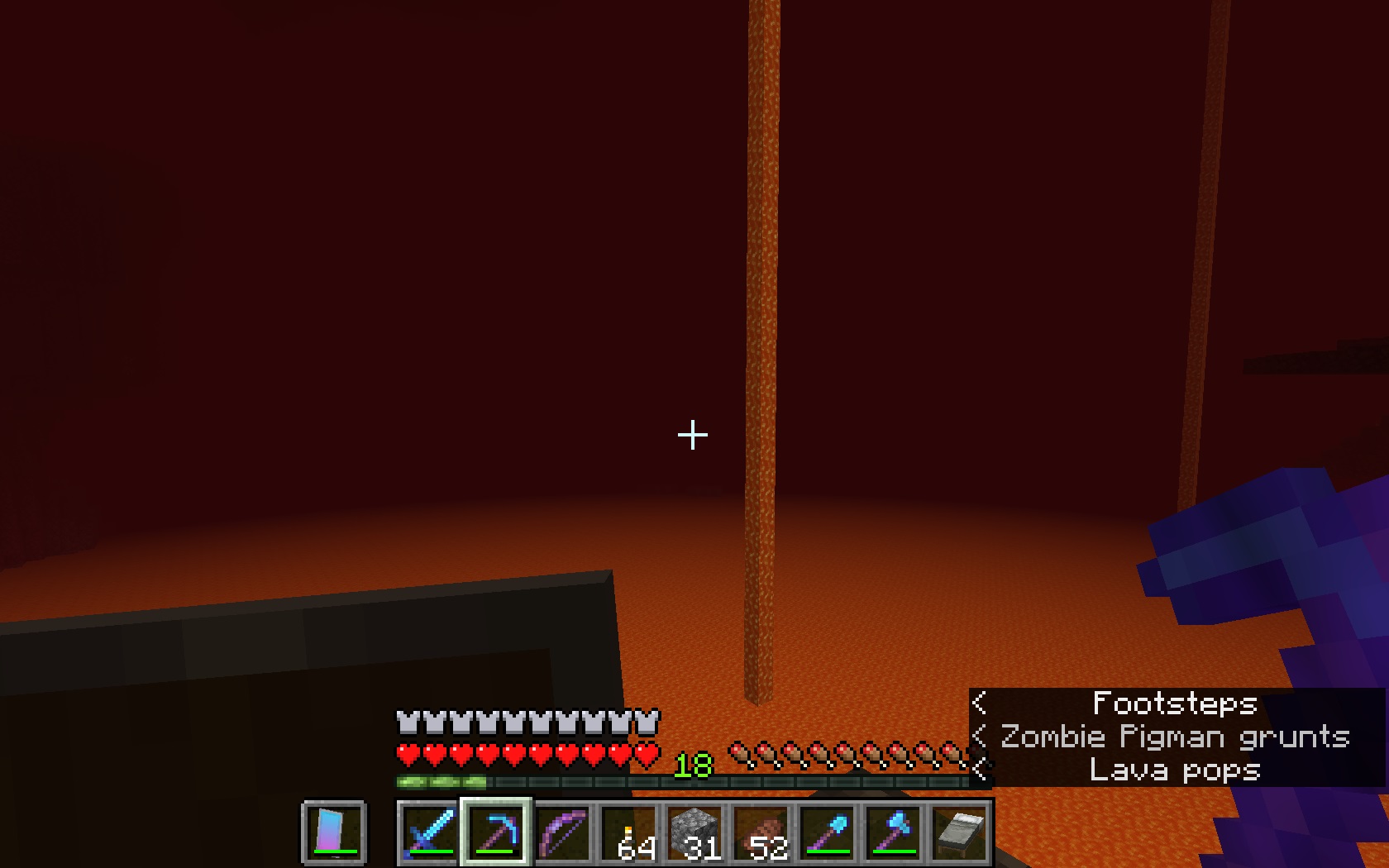 Been there done that... it's rough in survival. I kept a bow and stacks of cobble with nothing else... made the main path, then made it safe to walk... then boxed it in.

You might be able to tunnel under the lava.

Alternatively, tunnel up to the roof.

If you have a decent supply of 10 or so Ender Eyes (ender pearl + blaze powder), you can use them (right-click) to find the end portal. The eye will float slowly away from you, upwards, in the direction of the nearest stronghold (end portal). After a few seconds, 80% of the time the eye will drop to the ground and you can reuse it.

How is he getting leaf blocks? How does that count?

Shears to get leaf blocks.

Shears allow you to get leaf blocks. I think you can also get grass and sea grass with shears, as well as wool from sheep which is the one use that every one knows.

He killed the Ender Dragon... with an exploding bed? WTF.

He killed the Ender Dragon... with an exploding bed? WTF.

Yep. There’s no day/night in the nether or the end so you can’t sleep there. When you try the results are... explosive.

I know, it's just mind-boggling to me that someone would think to use this to kill a boss. Especially considering how much damage it does to the player.

And I don't understand why he puts a leaf block next to the bed. Limited protection from the explosion?

The desert suicide strategy to get Ender pearls is... interesting.

The block reduces damage to the player apparently.

I still haven't figured out the Portal stuff either.... he did it so fast.

My end portal and a nether portal hub have been put on hold. They'll be there when I want to do them later.

I've been building my own village on the island next to me. Built some basic housing, planted a few crops for them, and most importantly built a perimeter wall around it. I started with 4 unemployed villagers from various villages and they started breeding, cats began appearing and they've made their own iron golem to protect them. I've now got a few librarians that will sell me enchanted books with Mending, Infinity, Respiration III and Silk Touch, plus a couple farmers and a cleric to sell my foods and rotten flesh to.

But, oh boy, are villagers fairly bad a path finding. I've started adding multiple doors to simple 4x4 shelters because I kept finding villagers standing next to the wall closest to the bed on the outside, because they couldn't figure out how to walk a few blocks to the front of the house to get in and sleep.

I'm also continuing my search for jungle and mesa biomes with no luck. I've mapped out most of 6 different maps and found most of the other biomes, but not these. I did get lucky and found a shipwreck with a chest that had 3 pieces of bamboo in it, so from that I can now grow a TON of bamboo and have scaffolding finally which is awesome. Scaffolding is kind of like ladders on steroids in this game.

Jungle and mesa are really rare biomes, for whatever reason. You'll probably need to plan a serious expedition, with maps, lots of food, a bed, and materials to build temporary shelters to find one.

Jungle and mesa are really rare biomes, for whatever reason. You'll probably need to plan a serious expedition, with maps, lots of food, a bed, and materials to build temporary shelters to find one. 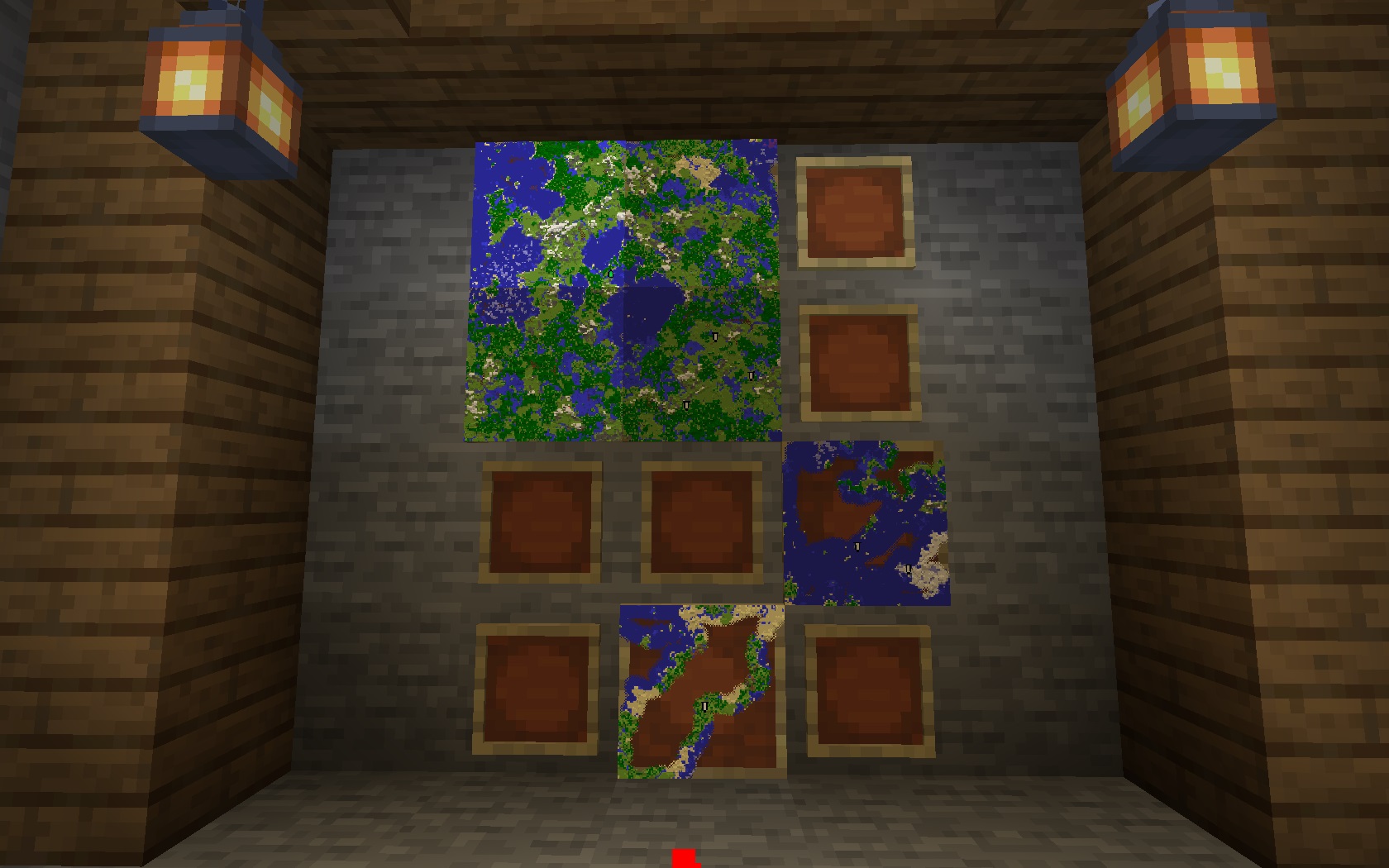 The 4 fully filled in maps are around my spawn. Mostly forests, plains, mountains plus a tiny desert and a large mushroom island in the upper right corner.

Below and to the right of those is the map where the ocean monument I explored is- there's some snowy plains, and some cool coral reefs on that map.

And below that is where my end portal is. I located the stronghold, then mapped out to the lower left corner and back up that map. There's a lot of desert and savannas in this and the surrounding (unmapped) areas.

I hope you all don't mind my marvelous MSpaint skills. After spending another night roaming unexplored areas and not finding any new biomes, I resorted to entering my seed into MineAtlas.com and found out that the closest Mesa is about where the red oval is in the picture below, and the closest jungle is about where the green oval is. The closest place with a Mesa and Jungle together is an additional block or two off the picture north of the green oval. I had been going in the opposite direction to find either of them. 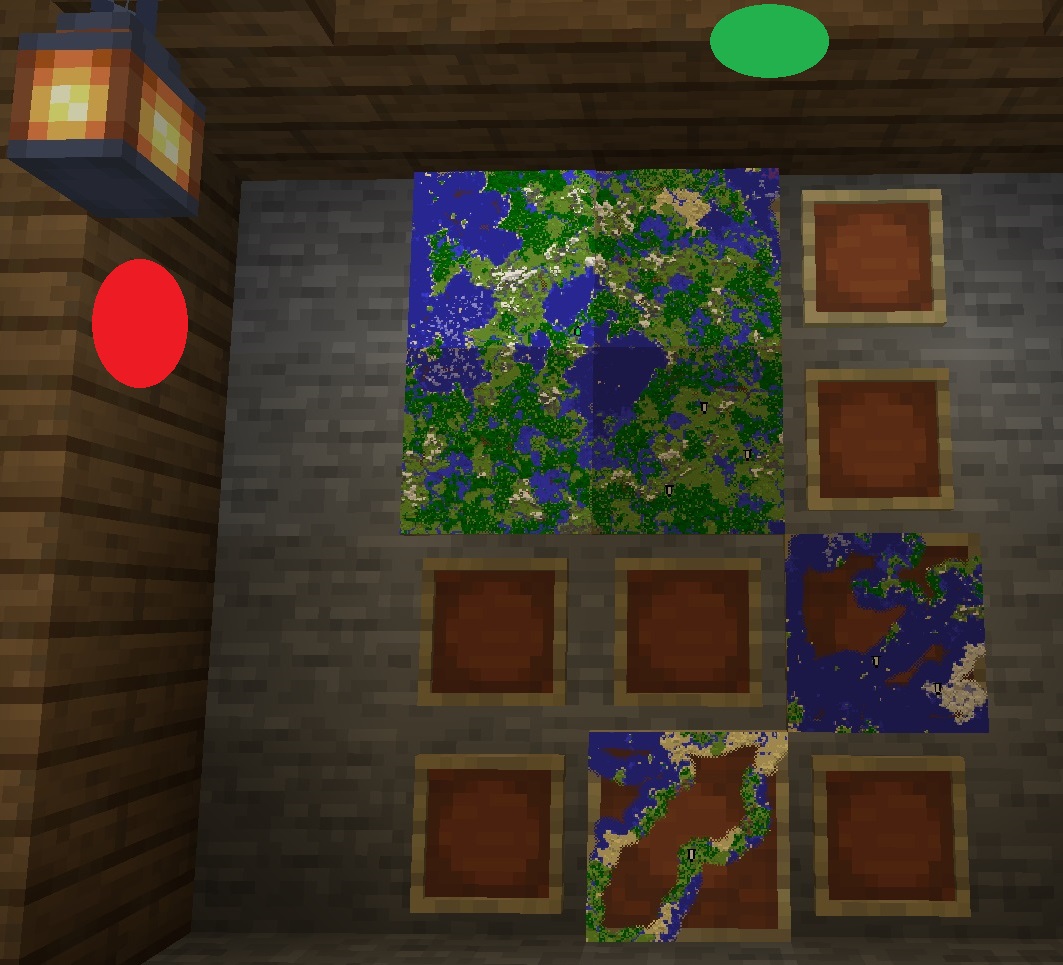 I made my way to the mesa first, since it was a journey mostly over water and thus easier to traverse in theory. I started exploring a bit and have found a skeleton spawner close to the surface and a lot of gold ore. Oh, and one of the chests by the spawner had a very rare Enchanted Golden Apple!

I'm going to set up a base there for a bit as I explore more and figure out what best to do the spawner.

Mesa biomes generate an excessive amounts of gold ore, more than you could ever find in any other biome. So if you're in survival and you need gold that is where you need to go.

For example, I'm updating my minecart network since Mojang nuked powered minecarts on curves like 2-3 years ago... I need close to 3,000-5,000 powered rails. I think, so found me a Mesa Biome, mine about 2-3 stacks of 64 gold, make rails, and work until I run out.

Since... Mojang decided my life wasn't hell enough, I now have to make sure each gap is close enough for an empty minecart with chest, since a minecart with chest that's filled now weighs more and goes further. Let's just say, for a few years the work on updating was going smoothly. Now I'm ready to stab a creeper. I suspect I'll finish fixing my railroad, in time for 2022.