Herman Miller Aeron, if you're serious about a $500 budget.

I'll second the Aeron chair. I used one for about 5 years at my last job and it was fantastic. No fatigue or back pain at the end of the day, and I'm a big guy.

Looks like it is running for $679 though. I want to keep it under $500. Lots of nice reviews though.

If you're not in a hurry, watch Craigslist for a used Aeron. They hold up for a long time, and you can usually find used ones at about $400ish.

I would also say go for an aeron. I know people that bought them 10 years ago that still have them and the chairs are still just as good after all that time.

I wanted an Aeron, but based on this Lifehacker list
http://lifehacker.com/5941523/five-b...
I went with the Ikea Markus. Mainly because all the others were $500+ and I just could not afford it. I like it though the seat is a little short, that it is does not protrude out forward enough. I am not a tall/long-legged man.

Arise thread and be necroed... by a GWJ'er who actually needs a new chair! Space is not an issue in my case but my current chair is failing on all fronts, arm rest is about to fall out i see a giant metal spike thingie coming out the back and side (i guess it's whats supporting my back)

So... Groan how do you like the Markus... everyone else what do you all like these days? I'm looking ideally at a high-back chair and then if need be a mid-back chair I'd love an Aeron chair but don't have $600-1400 to drop on one.

I'm gonna get laughed at, but for the money this chair has been pretty great to me. I've had it for roughly two years and not too many complaints. If I had to change anything at all, it would be that the seat would also be mesh, and that the armrests had more cushion to them rather than being hard plastic.

Both not overly bad complaints though.

Wow. So after 4 years I still have the Markus! It's still a great chair, holding up very well. We have all Aeron chairs at work. I just don't get the cost of them. I would rather sit in my $200 IKEA chair than sit in a HM chair for hours on end.

Looks like the Markus is still $199. Apparently chairs don't go down in cost much.

Well i tried the Markus myself and i'm going to be taking it back, the seat is to shallow for me and the lumber is in a weird spot on my back (maybe my spine is already messed up

) Back to the drawing board with me.

Hi!
Totally missed this.
I'm not terribly happy with the Markus. I've had it now for 2 years and I find the lack of controls a pain in the back/ass.
I want the seat out further and to be able to tilt it but I can't. I'm looking at the DX Racer chairs. http://dxracer.ca
Anyone have or can vouch for them?

A guy I work with got a Dxracer recently, and he really likes it. My current chair is starting to crap out, and I've got my eye on a Dx as a replacement at some point. New house expenses means that's a way off though.

My work is willing to let me expense an ergonomic chair. The Aerons look good, but I still have a hard time justifying $600 for a chair, even if I'm not paying for it.

Anyone else roughly 6' and around ~180lbs that can comment on the Markus vs. Aeron (Size B?)

The Aeron is so much better than the Markus it's hard for me to even label them as the same type of furniture.

I would take an old, used, beat up Aeron over a brand new Markus.

A friend of mine that's about 6'7 and weighs about 275 has the largest size Aeron. He was destroying roughly one to two chairs a year when I first met him. He bought an Aeron when we were juniors in high school.

He's had that same one ever since. We're 32 now. The things just don't die.

His other chairs all just wore out and either flat couldn't support his weight over time or his weight combined with his height and how that changed where the weight was focused when he would lean back or to the side. Some combination of all of it would ruin chairs rather quickly.

His Aeron, even being the one made specifically for larger, heavier people than I am, was still more comfortable than any chair I've ever bought for myself.

I still regret not buying a used one once when it was offered to me for $400.

I often wish I could take back all the money I've spent on crappy chairs and just buy an Aeron. I have never, ever sat in a better office chair.

I bought my cousin a DXracer for her birthday. She loves it, and I think it's an abomination. So, y'know, there's that.

The DX is shaped fine, but the armrests are basically just... hard plastic. Also, the whole thing is covered in faux-leather. I hate leather (or fake-leather, or fake imitation leather, or what-have-you) for chairs. I'm just going to have to peel myself out of it later, and that both feels and sounds gross. Well, I think the butt pad is mesh, but since I don't game in my underwear that's the only place I don't care what it's covered in.

I know people flippin' love the DX chairs, but I'll never understand why.

I've been sitting in this for... five-ish years? It's not perfect, but it's pretty comfortable. I don't stick to anything, which is a huge plus. The arms are padded enough that I've never had flat elbows after sitting in it, even after 10 hour marathon sessions. I'm starting to look around for another chair, but it's not an urgent need. It will be hard to find something I like better in any kind of reasonable price range.

i usually remove the arm rests so it may not be a problem for me. the markus has hard arms too, but it never bothered me.
the DX series comes with a fabric version as well. I hope I can find somewhere that has them on display.

I don't have any specific chair recommendations, but I would suggest checking out local office surplus shops. You can usually get pretty nice chairs at a great discount if you don't mind buying used. 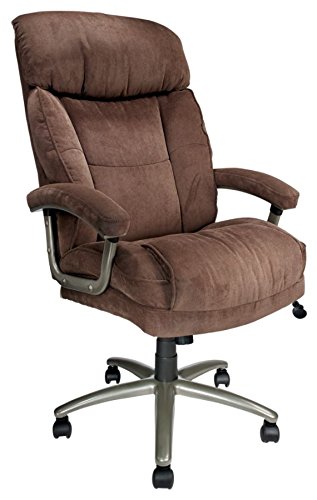 which is the BTEC820 big and tall

which was listed in store at $299 down to $150 granted i got it in black not brown. I like the ergonomics on it quite a bit as it allows me to curl my feet up under me while sitting and the arm rests are nicely padded and the whole thing is microfiber covering which i like way better than faux leather. Not an Aeron but i dont really want to spend that kind of money on a chair despite all their recommendations.

Ordered my DX Racer D series chair. They said it may take a couple weeks. I was able to try it in the store and a few of the guys at the store vouched for it. most of them bought one as soon as they started carrying them.
They had one in stock but it was the only one so i wanted a not-only-farted-upon-by-me chair. I'll report back with a opening/assembly/try photo montage when i can.

So update on the chair, it's still really comfy and great to sit in (i can even sit crosslegged in it) Two issues i have with it, one: can get pretty warm because of material but it's microfiber so not cloying like a leather would be. And two it doesn't tilt back far enough for me to get past the center of gravity (meaning that if i pick my feet up or stop pushing back the chair goes vertical again) i guess corollary to the 2nd is that even when tilted back as far as it goes i will pop a wheelie to make it tilt further so i guess i really want a tilty chair.

OH ya! This thread!

Build was easy. Chair is comfy and I recommend it

I really need to get one of those. My Staples special is mostly duct tape at this point.

@groan: What series is it?

I just ordered this one.

@groan: What series is it?

I just ordered this one.

Same one, D.
I went for leather or whatever it i. i think its pleather. very comfy for long hours. i debated getting the fabric one. would probably breathe better for long sessions on your butt. i'm sure you;ll love it

which is the BTEC820 big and tall

which was listed in store at $299 down to $150 granted i got it in black not brown. I like the ergonomics on it quite a bit as it allows me to curl my feet up under me while sitting and the arm rests are nicely padded and the whole thing is microfiber covering which i like way better than faux leather. Not an Aeron but i dont really want to spend that kind of money on a chair despite all their recommendations.

All the padding has essentially given out in the butt... extended sitting design my rear end.

Going to use this for as long as i can stand it then i'll spend the money on an Aeron and be done with the damn thing.

I bought a chair from Ergodirect awhile back. It's very high quality.

I still wish I'd sprung for an Aeron.

My wife got me a DX Racer a few months ago. I like it quite a bit. I kinda wish I'd gotten the cloth instead of the pleather, but since my basement computer room stays cold most of the year, it's probably not a big deal.