Well, Cook and Bell redeemed themselves, Broad accepted that he's not a new ball bowler and all's right with the world 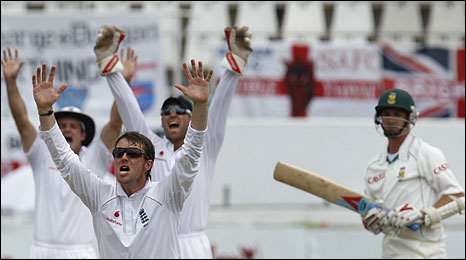 Been keeping my head down in this thread. The series has been a disaster of note.

Thank all the gods for Kallis, hopefully getting Strauss out early is a sign of things to come.

This is looking better, clearly a lot of tricks in this pitch. Strauss is going to rue his toss decision, I would not want to be batting fourth.

See the Big I Am has played another solid innings. You want him back ?

Yeah, it does look better for you guys, and you're right, I don't think we're going to want to chase anything on this strip. I suppose a lot of it will depend on our second bowling performance.

Lame again from Petersen, and it sounds like we've thrown away a couple wickets besides. That 65 from Cook looks more important when everybody else around him is collapsing.

Good start today, your guys are batting as though there's nothing to lose.

If anything, things are looking a bit easy. It doesn't look like the same pitch. Amla and Smith are looking very classy though.

Oh, and another fantastic innings from Agent Petersen.

Glad we got Brigadier Block out.

Petersen is the one we love to hate, but Trott annoys the living crap out of me.

I sense dark forces at work here, there's no way Colly can be this lucky without demonic intervention.

Collingwood (aka Brigadier Block) wasn't out when you posted....and he has taught his new recruits well

Collingwood (aka Brigadier Block) wasn't out when you posted....and he has taught his new recruits well :)

Test down to the wire, how Colly kept missing the nicks facing Steyn though is a mystery.

19 tests in history have been saved with 9 wickets down, and England has 2 in their last 3 games.

Nice to see the ball-tampering row chuntering on and on. Atherton nailed it right on the commentary - "put up or shut up", though he does have knowledge of this particular issue

Yeah, Atherton is an expert in he field.

But he's right. If the SA team or management brought it up, they should have followed through and made a formal charge.

I think it was intended as a warning, and not affecting anyone's career, but comes across as mudslinging more than anything else.

Administrators really are the enemy of all sport.

Pakistani national Imran Tahir, who apparently meets all requirements for playing with the South African side was called up, then dropped a day later due to red tape.

Poor guy, and poor us. We desperately need a decent spinner with the tour to India close.

Imran Tahir does not know which way to turn as his excitement at being picked for the national cricket team turned into a massive disappointment when he lost his place a day later.

Tahir (30) was on Friday unexpectedly picked for the 15-man squad for the fourth test against England, which starts at the Wanderers on Thursday.

The expectation was not that he would play, but that it was simply done so that he could get acquainted with the national set-up for the tour to India later this month.

He was a certainty for that tour as Proteas coach Mickey Arthur views him as an aggressive leg-spinner that can be an important weapon on the spin-friendly pitches of the sub-continent.

“My attorney is busy investigating the matter and solving the problems. I arrived in South Africa in 2006 -- about three-and-a-half years ago -- and was never aware that I would require a South African passport,” said Tahir.

Cricket South Africa (CSA) chief executive Gerald Majola said that he had taken the decision to withdraw the former Pakistani as there was uncertainty over whether he was available for South Africa.

“He has already qualified to play for South Africa, but he does not yet have a passport and we don’t want to end up in a similar situation as SA Rugby when questions were asked about Beast Mtawarira,” said Majola.

Majola expressed his unhappiness with the national selectors as they had been told that Tahir should not be part of their plans.

It is understood that he had already met the residency requirements to be available for South Africa in April last year.

There is a different theory that suggests he will only be available this April and that a mistake was made with the residency requirements as stated by the International Cricket Council.

Tahir, who has played for the Titans since living in South Africa, has decided to cut ties with the franchise. As of the beginning of next season he will be a member of the Dolphins.

Reluctant as I am to speak in support of administrators (viz my numerous posts in the soccer thread), it would appear from the information above that no one really knows what the situation is with regard to Tahir's eligibility. While it would naturally have been better to sort this out before his selection was announced, it has at least been aired before Tahir actually took the field of play.

Seems more like the selectors dropping the ball on this one.

As it turns out you are exactly correct. The convenor of selectors has taken responsibility for not checking his facts.

By some standards Tahir actually is eligible to play, but there was a problem recently with rugby player 'Beast' Mtawarira, who's from Zimbabwe. Beast is able to play according to IRB regulations, but our government requires players to hold a South African passport, so the cricket administrators are being super cautious.

Can't complain. England are 43/4, Cook's wicket was a little on the lucky side, but I'll take it.

Now you've got 4 days or so of Brigadier Block and his adjutants to look forward to, though I am concerned about the absence of Onions.

Ok, very much on the lucky side.

Collingwood is actually looking pretty classy. Not himself at all.

I'm at work on my 30th birthday, I should be at the cricket.

Holy crap. I slept past my alarm and boy, I wish I hadn't.

They haven't shown the highlights yet on the coverage, so I can't speak to the Cook dismissal, but it sounds bad.

EDIT: And happy birthday, DeVil. My 30th's coming up this year as well, so I won't make the same mistake.

Ok, very much on the lucky side.

Collingwood is actually looking pretty classy. Not himself at all.

I'm at work on my 30th birthday, I should be at the cricket.

Many happy returns DeVil. Maybe I should try to put together a compilation of England 9th-wicket stands and slap it onto a DVD for you

Thanks guys. Maybe Smith and the boys can give me a present and restore order to the cricketing world.

Okay, just saw the replay of the referral, and that is definitely a no.

I also don't know why Onions is out. Maybe they're trying to get some first-class cricket for Sid ahead of Bangladesh? I rate Siders as well, and I know he can get some real swing out of the ball, but it is harsh to Onions after a good tour.

Oh, it's not looking good now

As for Sidebottom, don't know why he's even in the squad. Once touted as an all-rounder (one problem - he can't bat), he seems to hang on in there despite never impressing in anything but limited overs rubbish. I'd be pretty miffed if I was Onions.

....well, I was spot on about that frizzy haired Yorkshire buffoon.

On the plus side though, our 12th man, General Precipitation, has made an appearance.

Jesus, did General precipitation make an appearance. I was on the road at the time, couldn't see a thing on the highway.

The game is starting early today to make up for lost time, they really should make that policy for games in South Africa though. The climate can vary, but rain often comes in the late afternoon here.

I'm betting that the 'early start to make up for lost play' wouldn't have been an option had the position been reversed...blimey, if they did that for test matches at Old Trafford, you'd have to block out 2 weeks on your calendar

I agree they could be more flexible, but I can't imagine that a 6 am start would go down well with anybody.

The Smith decision is another really appalling mistake by this umpiring crew (and the SA TV techs, evidently!)
Scores are level at the moment, but I wager the game would have a completely different complexion had those two decisions been handled properly.

That's always been part of the game, but don't we have the referral system to get those right?

You mean if England was on top in the game? If so, not really. It's the match officials decision, and is pretty standard procedure here due to afternoon thunderstorms which you can set your watch by.

Passed the English score with one wicket down.

I agree they could be more flexible, but I can't imagine that a 6 am start would go down well with anybody.

The Smith decision is another really appalling mistake by this umpiring crew (and the SA TV techs, evidently!)
Scores are level at the moment, but I wager the game would have a completely different complexion had those two decisions been handled properly.

That's always been part of the game, but don't we have the referral system to get those right?

Yeah, they really should have the hotspot system in place, but that's up to the local broadcaster, and the SABC doesn't have the money for it.

8:30 or 9:00 would be fine, I think, though that would necessitate a really early start for the venue staff and the teams.
Both getting the venue up and running, and the teams warming up probably require a couple of hours.

Yeah, they really should have the hotspot system in place, but that's up to the local broadcaster, and the SABC doesn't have the money for it.

Even a volume control button would have done the job today.

Hehehe, I'm watching without sound, so I'll take your word for it until I get home. See the weather has come down again.

Regarding times. I'm sure there's a lot that goes on before the game starts in the morning, but playing a complete game is, in my thinking, the most important thing. Early to bed and early to rise is good for you.